A versatile headset that has a few missteps but, on the whole, is a sound investment. 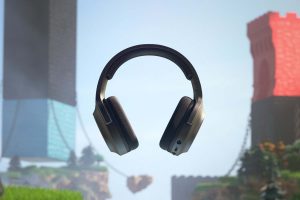 It wasn’t so long ago that I sung the sound praises of the Xbox Wireless Headset: a versatile entry-level wireless headset that’s mainly meant for Xbox consoles and Windows 10 PCs. For around the same price, you can buy the Razer Barracuda X, which offers worthy entry-level competition with some additional perks.

Where the Xbox Wireless Headset is meant for green-blooded Xbox gamers, the green branding of Razer’s Barracuda X is built for almost everyone but the Xbox ecosystem, though there is basic wired support for that. Natively, the Barracuda X is built to play nice with PC, PlayStation consoles, Nintendo Switch and Android devices. There is a catch, though: no inbuilt Bluetooth (unlike the Xbox Wireless Headset) means you’re reliant on a compatible USB port, which means the only USB-C port for Android devices.

As for other cons, these cans only have an okay wireless range, the microphone isn’t up to the same quality standard as the sound, and there’s no Razer Synapse integration for straightforward audio tweaks on PC. Gripes aside, the Barracuda X boasts fantastic battery life, all-day comfort with virtual surround sound and a design that offers the versatility to treat it as a gaming headset or a pair of outdoor headphones.

Discrete design for outside use

Not a great mic 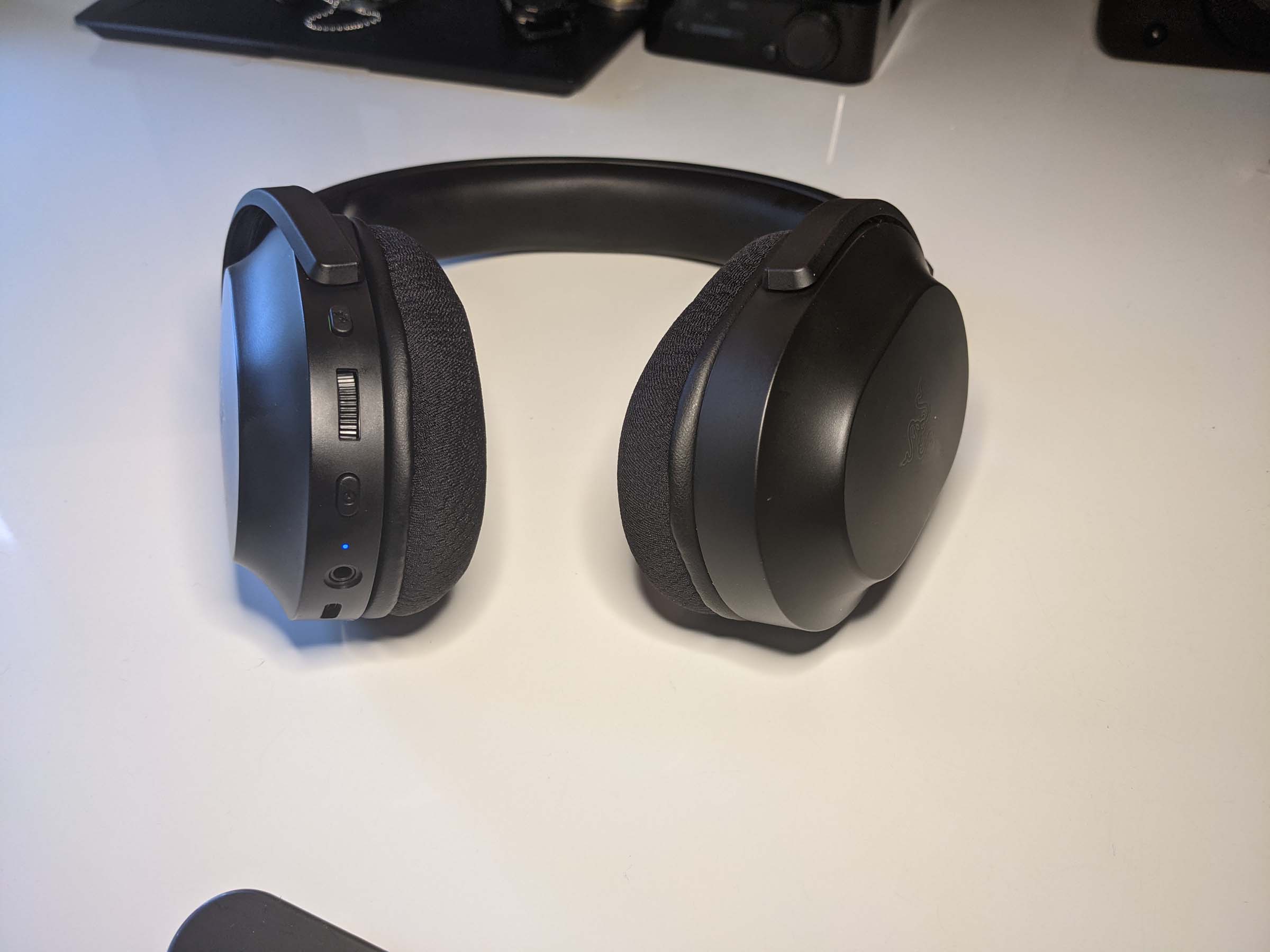 How much does the Razer Barracuda X headset cost in Australia?

The Razer Barracuda X headset retails for $149.95 in Australia and you can expect to find it at retailers like JB Hi-Fi, Harvey Norman, Bing Lee, Officeworks, Amazon and eBay. At the time of writing this review, only JB Hi-Fi had a stock listing for the Barracuda X, which was for $149.

The Razer Barracuda X box comes with everything you need to play. The headset comes with refreshingly large and user-friendly setup documentation, alongside a USB-C dongle, detachable cardioid microphone, a 3.5mm audio combo cable and two USB 1.5m cables: one a USB-A to USB-C extender (for the dongle) and the other a USB-A to USB-C cable. The microphone was slightly squished, otherwise it’s an incredibly well-packaged product and the protective bags are a nice touch. 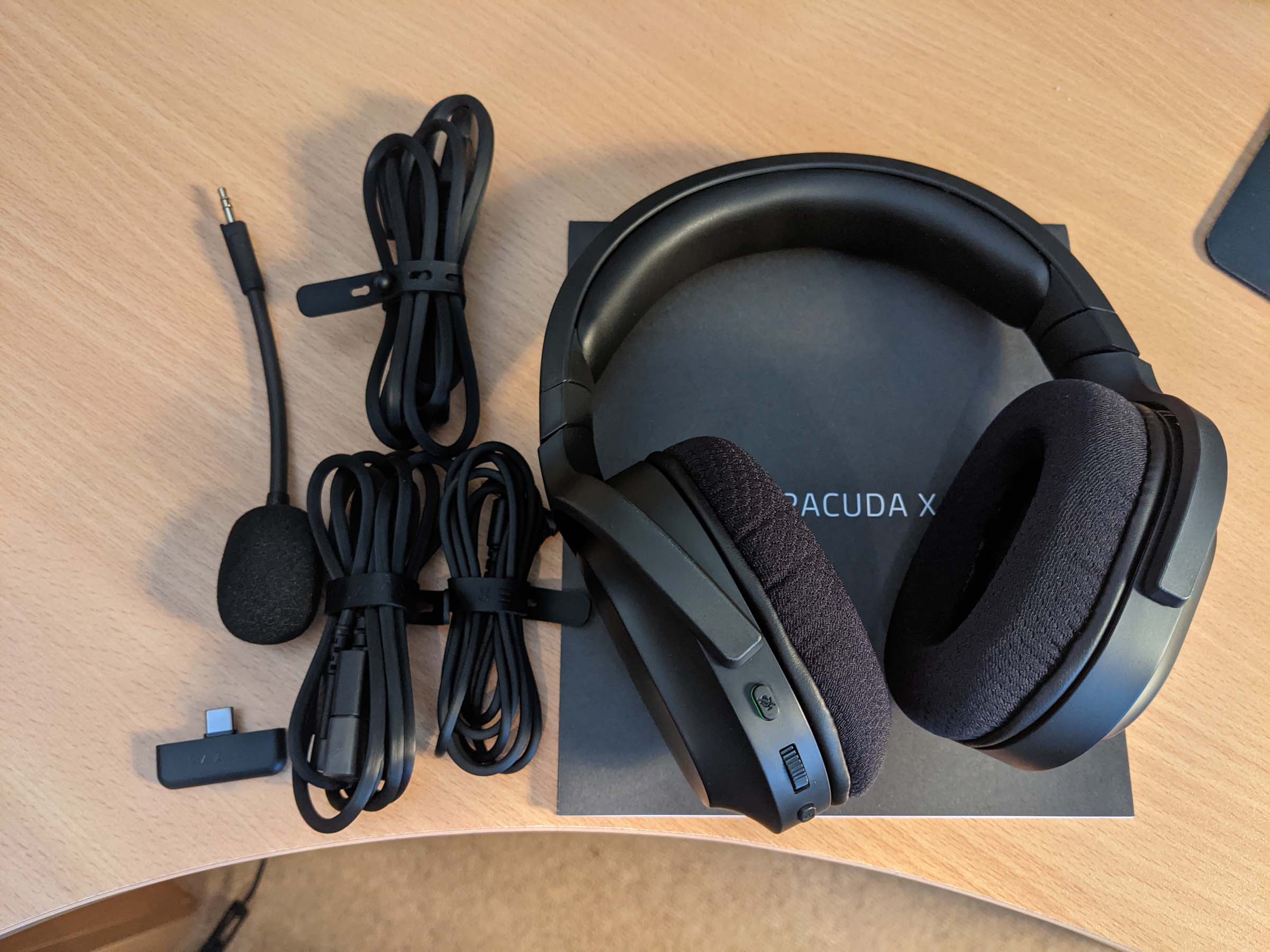 The Razer Barracuda X headset is incredibly comfortable to wear, whether you’re listening to music throughout the workday or getting lost in an hours-long gaming session. This is thanks to the comfort combo of a thick, soft headband and memory foam earcup cushions. Basically, get the headband setting right to match your noggin and you’re ready to go.

In terms of the actual looks, the Barracuda X is distinct from other gaming headsets because it ditches the gaming aesthetic in favour of a subtler design intended to be something you’d feel comfortable wearing outdoors. To this end, you’ll have to get the light just right or get the earcups closer to your eyeballs to spot the low-key Razer logo, while the left-earcup physical buttons and ports are all incredibly low-profile. In terms of looks, it’s closer to a pair of Sony XM4s than the more gamified look of our current reigning gaming headset the SteelSeries Arctis Pro Wireless.

Initially, the low-profile separate power and mute buttons were a bit finicky to find, but it’s a fast enough lesson to use the volume wheel as a feeler guide. The removable microphone has a non-symmetrical port, meaning there’s only one way you can connect it, which is essential for its cardioid design. It pops in and out easily enough, which is handy not only for switching headset to headphones, but also to get the not particularly bendy microphone arm out of your face.

When you want to charge the headset, connect the USB-A to USB-C cable to a PC or other compatible power source to charge it. You get around 20 hours of battery life out of this headset, so don’t expect to need to charge it too often. The main downside for charging is you’ll be guessing; the lack of Razer Synapse software compatibility on PC, particularly, means there’s no way to tell how much juice you have left. 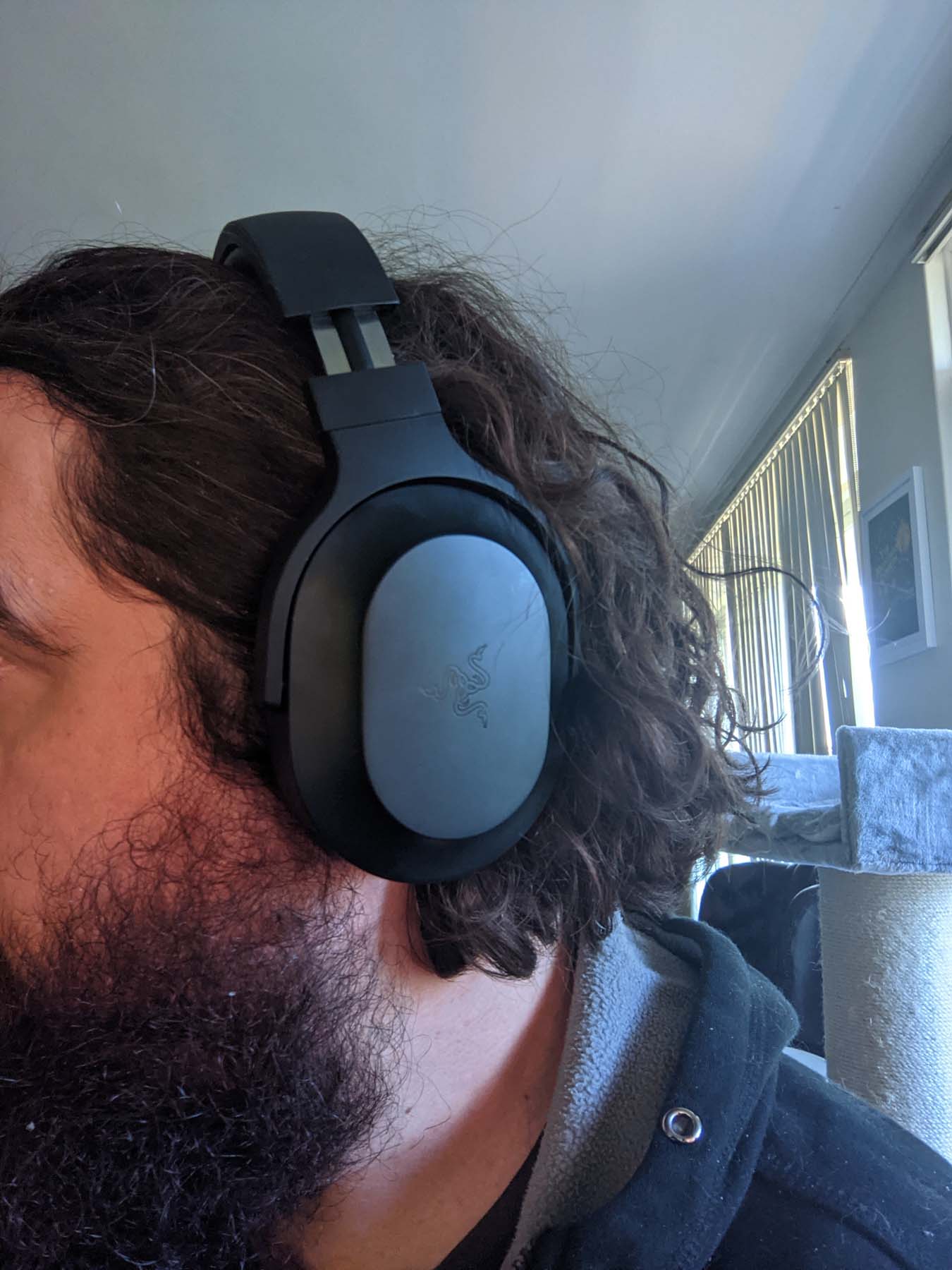 Here’s how the Razer Barracuda X fares in terms of its core specs. For comparison, the Barracuda X specs are placed alongside the similarly priced Xbox Wireless Headset specs. 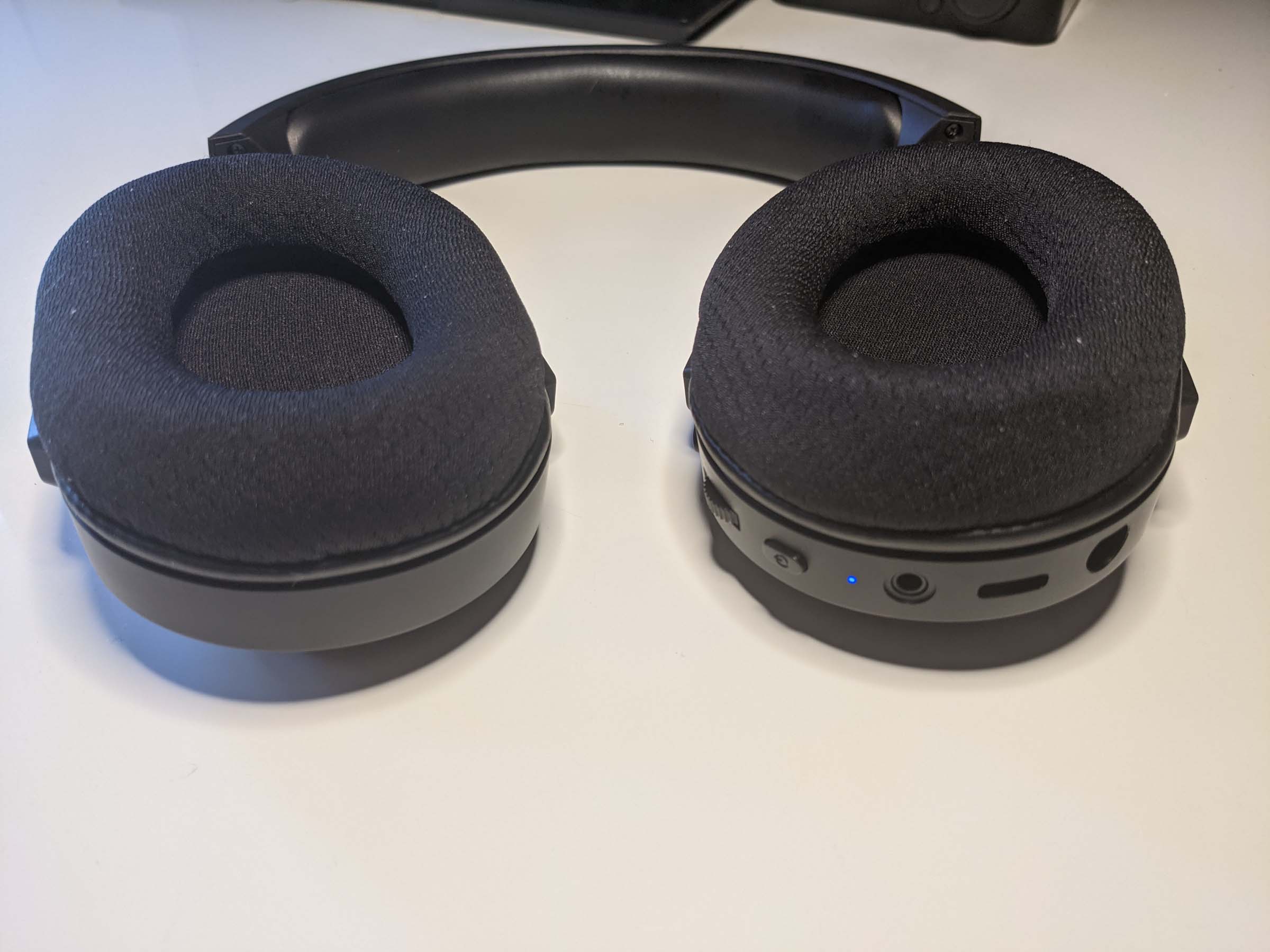 One of the great perks of the all-day comfort of the Razer Barracuda X headset is the passive noise cancelling that comes with these over-ear headphones. Unless you’re at full volume, the sound doesn’t bleed in a noticeable way for those sitting near you.

Speaking of volume, these cans know how to party. While rave-deafened peeps won’t get ear-bleeding volumes out of this thing, those without damaged hearing should be happy with how loud they get. For everyday use—a mix of music playback, movies, video calls and voice chat—I had the volume set comfortably below the volume dial’s highest point. The wireless range has you covered in the same room, but shifting more than a few metres away causes dropouts.

In terms of sound, the Barracuda X headset offers big audio, albeit without anything close to booming bass. That lack of Razer Synapse integration has another con for PC user: no easily accessible equaliser. Admittedly, there is a workaround for this via Razer’s THX Spatial Audio application, but it requires Razer credentials to use and only comes with a 15-day trial. Once that expires, it’s an additional cost just to change sound settings.

The soundscape improves once you install and switch over to THX Spatial Audio, even before you mess around with default global equaliser settings (game, movie, music) or start tinkering with custom options. You can boost the bass here, too, but even when it’s maxed out, the Barracuda X doesn’t have that beefy kick. Still, if you do pick up these cans, I’d absolutely recommend using the THX Spatial Audio trial to hear the difference in sound.

And that’s just for non-gaming application. In-game results were particularly impressive, even when just using Dolby Atmos for Headphones to handle surround-sound virtualisation in Windows 10. I spent most of my testing time in Hell Let Loose, which is a high-lethality FPS that has a varied soundscape, ranging from voices and footsteps to vehicles, gunfire and plenty of ear-shattering explosions.

The Barracuda X proved to be a faithful fragging companion, helping to accurately identify when enemies were near, the direction they were coming from and assisted in isolating gunshots to sniff out enemy locations. These cans work just as well in more relaxed games like Age of Empires II: Definitive Edition and arcade titles like the Metal Slug series.

The only in-game detractor is the lacklustre microphone which, I was frequently told by my Discord squaddies, had muffled and quiet output. As headphones, the Barracuda X is great for the price, but treating it as a headset where you’re including the importance of the microphone, it’s not as ideal an in-game companion (the louder the game, the more people will struggle to hear you, too).

Barracuda X and other platforms

For starters, while the dongle is small enough, that’s an extra component attached to your smartphone’s only port to contend with (it’s a similar story with the Switch), which isn’t ideal if it’s shifting around in your pocket. Additionally, it really depends on what case you have. For instance, I use a hard wallet case for my Google Pixel 5, which has room for thin USB-C cables, but not for a wider dongle, which is what the Barracuda X has. Basically, I have to remove my case to connect the Barracuda X’s dongle, which would be so much easier had Razer added Bluetooth support like Microsoft did with its Xbox Wireless Headset.

The Barracuda X is also compatible with any other device that accepts a 3.5mm cable, which extends the compatibility further, but also stops the headphones from being wireless. This also includes the Xbox One, Xbox Series X and Xbox Series S, but you’re better off opting for the Xbox Wireless Headset if any of those are your primary consoles. 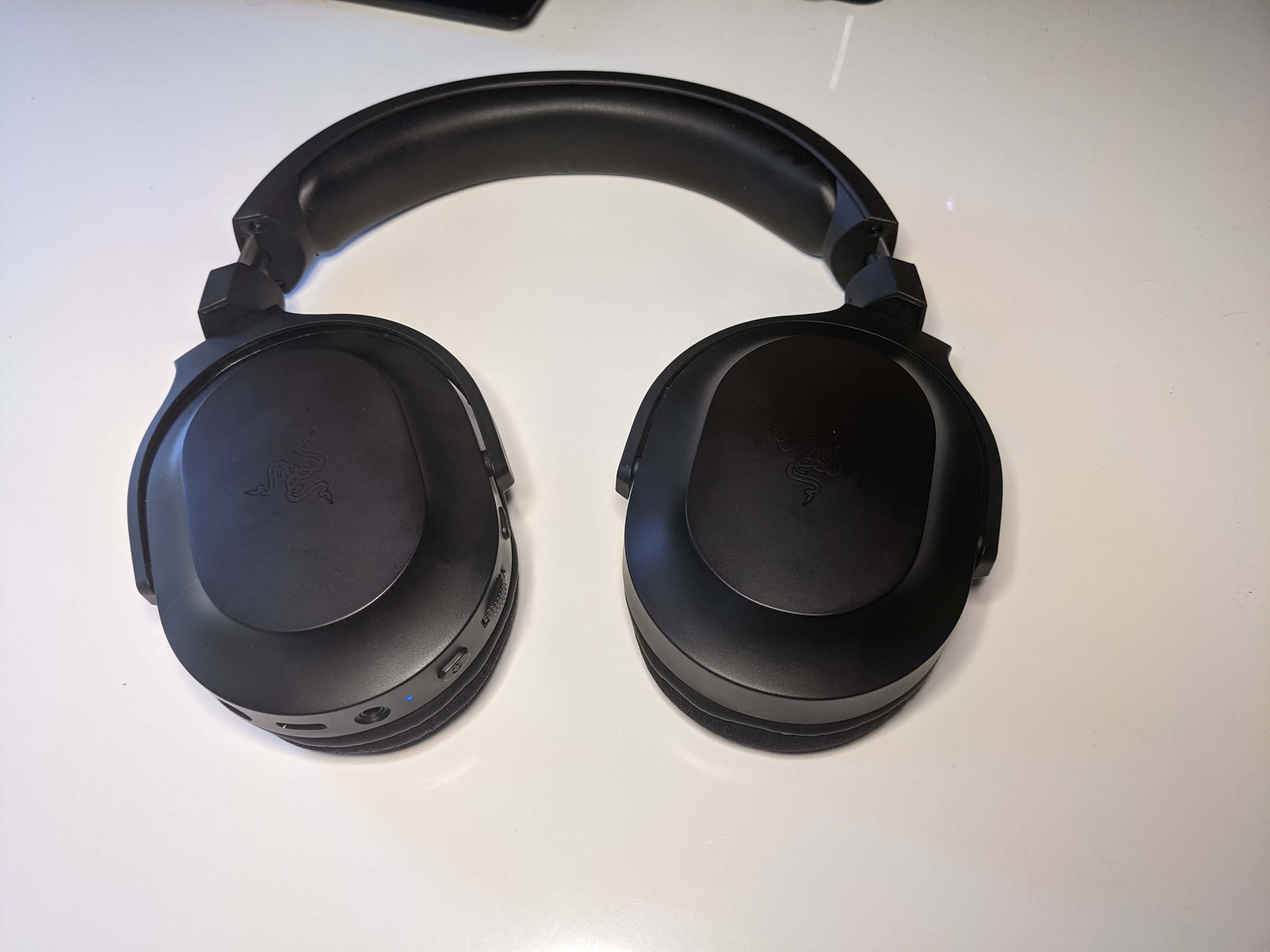 Is the Razer Barracuda X headset worth it?

If you’re after an affordable wireless headset that natively supports multiple popular gaming devices, the Razer Barracuda X is absolutely worth a look. The lack of Bluetooth makes it less appealing for smartphone use, even if the design lends itself to non-gaming applications. Still, the fantastic battery life, all-day comfort and virtual surround sound make this a versatile headset that’s absolutely worth buying if you’re looking for cans to use on PC, Switch and/or PlayStation (with Android as an option).