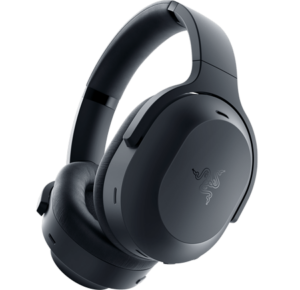 Quick verdict: Razer Barracuda Pro
The Razer Barracuda Pro is a versatile gaming headset that’s designed to work with all major gaming platforms, except for Xbox consoles. It’s comfy around the ears, but it feels designed with large heads or big hair in mind, with a slippery headband fit for smaller noggins. While the microphone quality is tinny and the audio lacks big bass, the Barracuda Pro still has big sound and well-balanced audio.
Pros
Comfortable around the ears
Long battery life
Well-balanced audio
Cons
Poor fit on the headband
Terrible microphone
Bulky, angled dongle 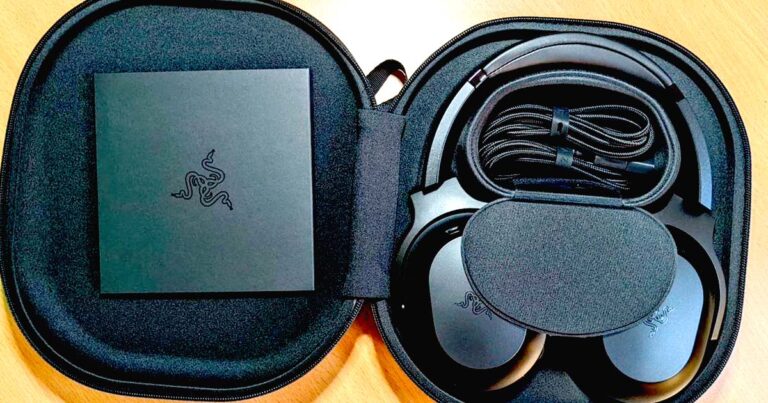 The gaming headset top dog at the moment is the SteelSeries Arctis Nova Pro Wireless which, if you buy the Xbox version, is compatible with all of the major gaming platforms as well as mobile and other devices via Bluetooth. Still, you have to be willing to invest $679RRP for the wireless version. Even the wired version costs $499RRP.

Conversely, the Razer Barracuda Pro costs $439.95RRP, and you can find it online for under $400. That’s a competitive price for a wireless gaming headset with added versatility via active noise cancelling (ANC) and Bluetooth 5.2. That’s cheaper and more versatile than the Astro A50 Wireless and the recently unveiled Sony Inzone H9, but if you want wireless versatility and don’t mind an older model (sans ANC), go with the older but still-strong SteelSeries Arctis Pro Wireless.

Mostly straightforward to connect but Razer Synapse has some quirks.

As you’d expect from a wireless gaming headset these days, the Razer Barracuda Pro is a mostly plug-and-play affair. Most of my testing was done on PC, and you’ve got two wireless connectivity options. The easiest way is via Bluetooth, but that creates latency, so it’s not ideal for gamers (but it’s fine for other everyday audio playback).

For low-latency wireless, you’ll need to connect the included dongle, either to a free USB-C port or by connecting the USB-C dongle to the included USB-A to USB-C cable. I used the latter, not only because USB-C ports are at a premium on my desktop PC, but because the L-shaped dongle is a finicky pain to place.

This doesn’t just apply to desktops, either: my phone case blocked the L-shaped dongle from properly inserting (as it did with the Barracuda X). I imagine any case that extends past the bottom of a smartphone will have this issue. It wouldn’t be a problem if it was a smaller form factor or one that extended straight out instead of hooking to one side.

In fairness, mobile devices are a better fit for Bluetooth (latency notwithstanding), and it’s great to see that this missing connectivity feature from last year’s Barracuda X has been added for the Barracuda Pro. That said, the Razer Barracuda line is supposed to be compatible with Android, Switch, PlayStation (4 and 5), and PC devices via the dongle, so factor that in if 2.4GHz low-latency wireless is important for your cased-up mobile device/s.

What’s more convenient is you can also connect to a 2.4GHz and Bluetooth device simultaneously, with a dedicated button for switching between the two. As is the trend with PC-first Razer products, tweaking is done via Razer Synapse software (there’s also a Razer Audio mobile app). And as is the unfortunate norm, Synapse is a somewhat underwhelming experience. There are a handful of dedicated tabs for tweaking, but I had to play around with THX Spatial Audio to even get it to work. The Barracuda Pro didn’t show up (and still doesn’t) as a selectable headset for use, and even with bass boost on, there’s a lack of oomph even when the bass slider is maxed out.

A too-large headband makes for slippery use with an otherwise comfy set of cans. 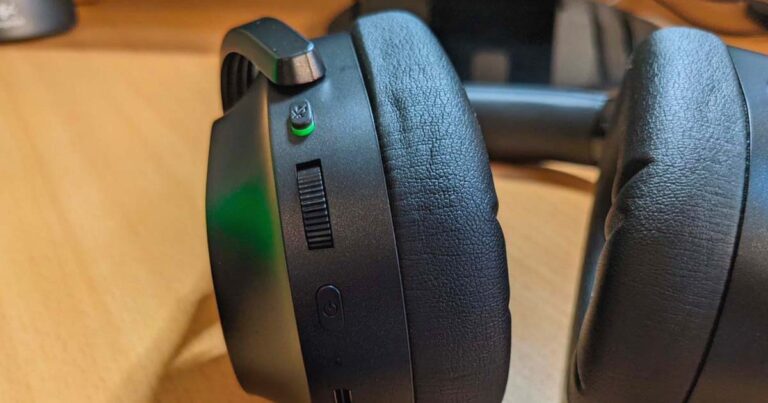 Compared to the preceding Razer Barracuda X, the Barracuda Pro has a similar design in terms of a soft leatherette headband and cushioned fabric earpads. The Barracuda Pro is very comfortable to wear for long sessions, with one big disclaimer: it feels designed for big heads only.

As someone who doesn’t exactly have a small noggin, a more comfortable fit came from growing out my hair. No, really. Even on the smallest headband setting, placement is important so the headset doesn’t slip around on your head. Basically, forget about headbanging in these bad boys and try to avoid big head movements.

The 3.5mm audio port is gone, otherwise all the other manual controls on the left earcup feel identical to the Barracuda X. That 3.5mm audio port on the Barracuda X also doubled as a detachable microphone port, which isn’t part of the Barracuda Pro. There’s also now a dedicated wireless input switch on the right earcup, so you can tap between Bluetooth and 2.4GHz sources. The other design change, which blends in well to the overall look, is the inclusion of ANC microphones.

Well-balanced audio with lacklustre bass and a bad microphone. 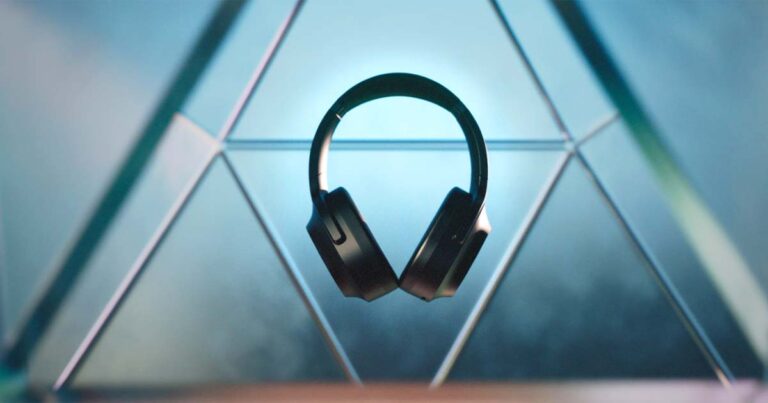 One of the biggest pros of the Razer Barracuda Pro is the battery life. Razer estimates up to 40 hours of nonstop use, and I easily clocked more than 30 hours in my tests. This is a smart move by Razer because it ties into the multifaceted design of the Barracuda Pro.

Every time I tested the Barracuda Pro in multiplayer games, there were complaints about the microphone quality on default settings. No matter what changes I made in Razer Synapse, it didn’t really help improve it from sounding muffled and tinny. When comparing video clips between the Arctis Nova Pro Wireless and the Barracuda Pro, for instance, the quality difference was staggering. By using an integrated microphone instead of a retractable or removable one, Razer has compromised on the voice communication part of a gaming headset, which you won’t hear unless you listen to recordings but your teammates most definitely will.

On one hand, the complete lack of an external microphone helps accentuate the everyday usefulness of the Barracuda Pro. This headset does, after all, have well-balanced out-of-the-box sound and a comfortable passive noise-cancelling design that’s accentuated by great active noise-cancelling. The lack of a microphone pairs well with long battery life and Razer has even included an admittedly bulky carry case, which is a nice edge over the competition in terms of treating the Barracuda Pro as multipurpose headphones.

The thing is, unless you’re looking for one pair of headphones to replace all others—and bear in mind the Barracuda Pro doesn’t support Xbox consoles—there are better options. Razer is, first and foremost, a gaming peripherals manufacturer, and being able to transmit voice comms in a clear and undistracting way is still an important part of any gaming headset.

Is the Razer Barracuda Pro worth buying?

The price is right for specific use-cases.

If your favourite pair of noise-cancelling headphones just died and you want a replacement pair of over-ear cans that also work on most gaming platforms, the Razer Barracuda Pro is well worth considering. The thing is, there are compromises on the gaming front (most notably, no external microphone) and the everyday playback front (bulky headphones made for bigger heads) that have me reaching for alternatives, even if that means using different headphones for everyday playback or gaming scenarios.

How we review gaming headsets

We factor in price and connectivity when reviewing a gaming headset, then put it through the motions of testing during hours and hours of gaming and everyday use. This also lets us determine the battery life and extended comfort of a gaming headset, as well as garner feedback on how the microphone sounds over Discord when playing with others.

Everyday testing includes video calls and music playback, and we favour headsets that are more than single-function devices. In fact, the headsets that tend to score the highest are those that marry big sound (including oomph-tastic bass) with all-day comfort. Wired and wireless gaming headsets are generally more closely compared in their respective connectivity categories, except where there’s crossover for things like comfort and sound performance.

Then we take a look at the nice-to-haves. Companion software isn’t necessarily a dealbreaker if it’s average, but it can help elevate the usefulness of a headset. We also appreciate easy-to-reach physical controls for the main functions on a headset.

Here are the most frequently asked questions about Razer's headsets.
Yes, the Razer Barracuda Pro comes with THX Spatial Audio, which is a virtual 7.1 surround sound platform. Once you get it going, it adds great depth to music playback, movie watching and even a competitive edge for gaming.
Good is the right word: Razer headphones are well worth including in gaming headset comparisons because they have well-balanced audio out of the box. There are better options out there, though.
No, the Razer Barracuda Pro doesn’t work with Xbox One, Xbox Series S or Xbox Series X. In fairness, this is likely due to specific hardware requirements for how peripherals work with Xbox consoles.