There’s a bit of clank, but this latest Ratchet & Clank adventure is ratcheted up in all the right ways. 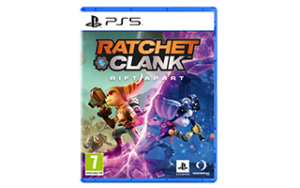 4.5
Players
1
Platform
PlayStation 5
Rating
PG
Playtime
11 to 17 hours
See it at Ozgameshop
See it at Kogan

Quick verdict: What is Ratchet and Clank: Rift Apart like?

Sure, Ratchet & Clank: Rift Apart has some camera issues, a smattering of annoying bugs, AI fails, and the odd invisible wall that deters exploration. But none of these issues are big enough to overly distract from a gorgeous game world stuffed with cool characters that you’ll quickly care about (not to mention the killer arsenal).

The first console I ever splashed cash on was the original Xbox. Prior to that, I spent a lot of time with my Game Boy and the last TV-connected console in my family home was the Mega Drive, before some clown flogged it. The point of this history lesson is to contextualise that, unlike so many other homes, I never had access to a PlayStation until I eventually bought a PlayStation 3. Talk about late to the party.

This means I missed out on the early days of Resident Evil and so many other PlayStation icons, including Ratchet & Clank, which meant I was late to the part on some iconic franchises. And while the quality of Resident Evil games has varied in the past decade (check out my Resident Evil Village review here), my introduction to and experiences with Ratchet & Clank in the same timeframe have all been positive.

Action-platformers tend to blur into one for me, but my love of shooters meant I immediately fell in love with Insomniac Games’ clear adoration, not to mention implementation, of a god-tier arsenal. In so doing, these devs had set themselves the seemingly insurmountable task of one-upping their own arsenal whenever a new Ratchet & Clank game rolled around.

While I’m no Ratchet & Clank historian, Ratchet & Clank: Rift Apart has an eclectic range of pew-pews that range from riffs on familiar archetypes to downright bonkers blasters. In many respects, Rift Apart’s arsenal is a clear embodiment of the design philosophy of these games: prioritise fun at all costs and take every opportunity to entertain the player.

For instance, at first glance the Burst Pistol is the kind of basic starting weapon you get in most shooters, but the PS5’s adaptive triggers help elevate it, even if it does lead to a sore trigger finger during lengthy play sessions. Pull the trigger halfway for an accurate single shot or yank the trigger all the way for burst-fire mode. For my play-through, the Burst Pistol evolved from basic to versatile and essential companion after I fully upgraded it with Raritanium. 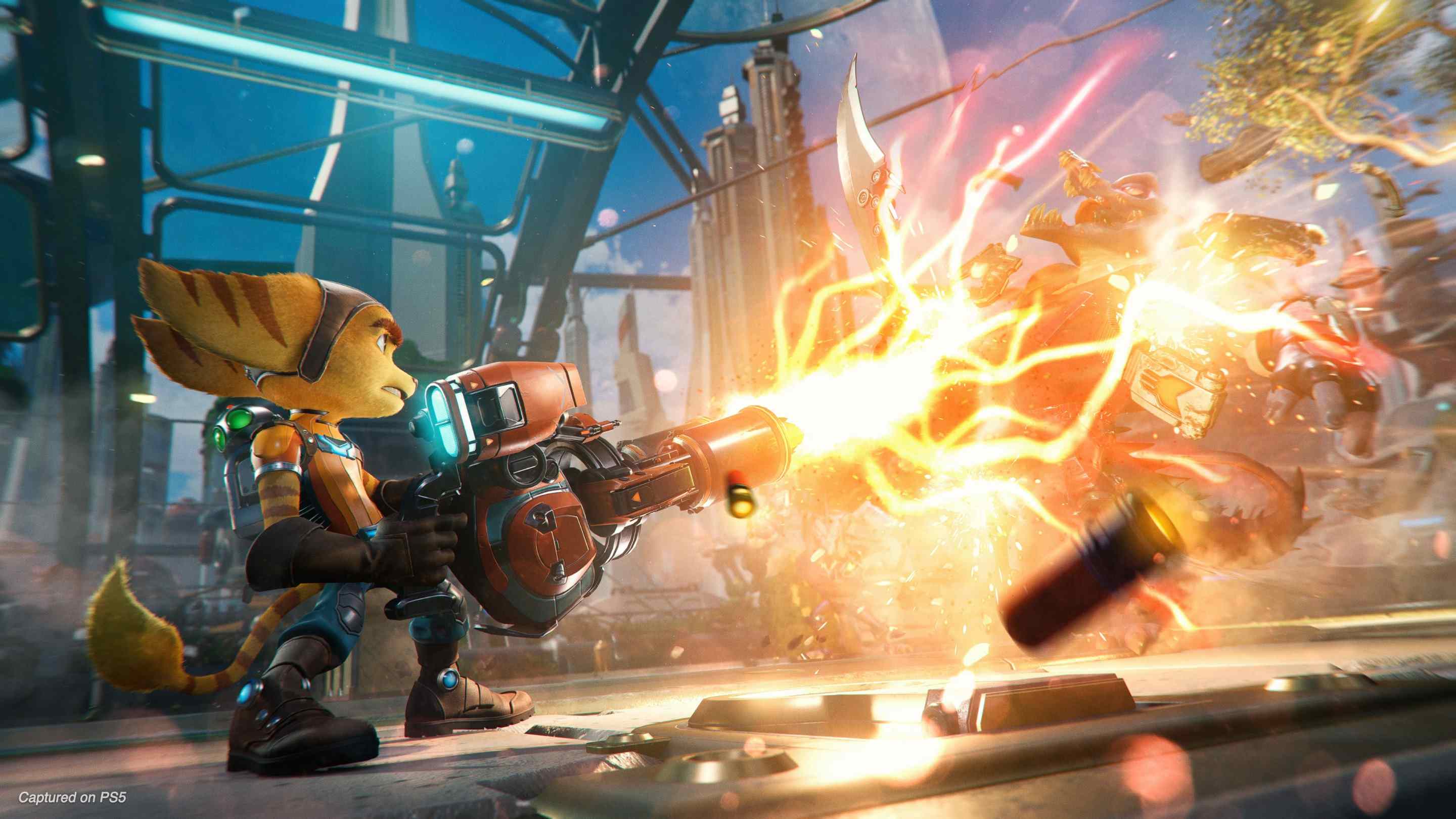 This is just one of many collectable items you’ll find in a sea of Bolts (in-game currency) that’ll have you bashing every object you encounter just to see if it’ll spew out the last few Bolts you need for your next weapon purchase. While looter-shooters deter weapon allegiance because your next favourite gun may be in the next crate you crack open, Rift Apart’s approach to weapons is one that rewards fervent area-clearers and deters blinkered main-pathers who may miss out on the bigger, better, wackier mid-game and late-game sci-fi shooters.

Depending on your patience levels, Rift Apart will either inspire or frustrate you (or maybe both) because you have to level weapons up to a certain point before you can access all of their upgrades. It’s a good thing levelling up equates to simply using a weapon more, and considering that running out of ammo is a very real threat in boss battles, you’ll be left with just an OmniHammer if you insist on sticking with the four weapons you can bind to the D-pad.

All other weapons—and there are a bunch, almost all of which are great—are found by holding Triangle, which conveniently slows time. Once you give into the requirements of the weapon-upgrade system, boss battles and fights against waves of enemies become a beautiful bullet ballet as you unleash hell while sprinting, dodging, jumping or, later in the game, skating around or through these combat arenas.

Sure, there is platforming and there are puzzles, but there’s no denying that Rift Apart is a shooter first and everything else second. Whenever you do run out of ammo, it forces you to use new or underappreciated arsenal items, and it’s almost always for the better. There’s a mix of close-range, long-range, area-of-effect and just plain fun guns, which can be combined to tap into a Ratchet & Clank power fantasy once you start upgrading them.

While the AI is never particularly bright, you can challenge yourself to fairer fights by steering clear of overpowered guns or alternatively, if you’re a sucker for cheesy tactics like I am, you can do a Dead Cells-like build of automated death and destruction that you can just deploy and appreciate. Despite the massive amount of onscreen chaos—which is sometimes beautifully overwhelming in a bright-colour-explosive Housemarque twin-stick-shooter kind of way—Rift Apart didn’t drop frames in my play-through but it was consistently breathtaking. 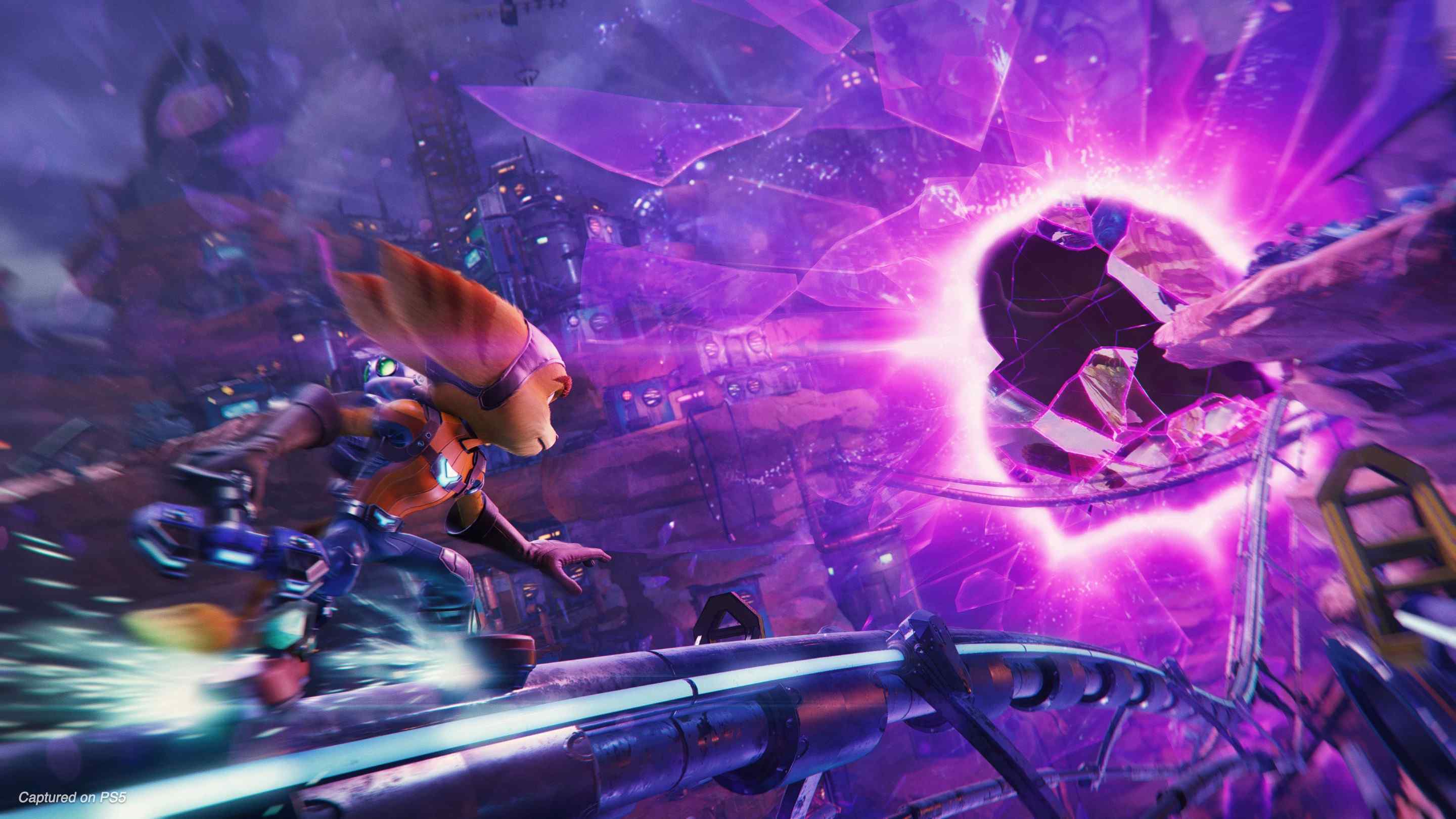 Insomniac clearly isn’t gunning for a realistic look here, but Rift Apart is still all kinds of gorgeous. The subtle PlayStation 5 flexes are great, too: the ease of shifting between dimensions, the incredibly fast loading times, and the seamless transitions between gameplay and cutscenes. I’ve deliberately avoided talking about the story because, while it’s not exactly filled with epic twists and turns, it’s an interdimensional tale that manages to be satisfying for casual fans like me and will surely be even more rewarding for long-running fans of the franchise.

Most of my time with Rift Apart was spent in sprawling hours-long ‘just one more mission’ play sessions, which is testament to the quality of the game and the gameplay loop that always seems to be throwing in something new that’s a fun inclusion to the formula. The only disclaimer to all of this praise is some unfortunate bugs.

The AI may not be bright, but there are times when it’s clearly waiting for you to run over invisible triggers before it’ll start attacking. At other times, the AI will bug out so completely that I had to go find lingering baddies that are stuck but must be cleared before the next wave will start. There was one occasion where I had to leave an area and come back for enemies to spawn properly, and another where I had to revisit a checkpoint because the remaining enemy was stuck behind a door.

The more persistent issue that you learn to work around is the camera, which can block your view at low angles as items don’t always disappear like they should to keep things clear. It doesn’t help that Ratchet is such a small critter that even long grass can sometimes prove painful.

Ultimately, these detractors are more immersion tarnishers than outright destroyers, and hopefully post-launch patches can make these gripes irrelevant. The checkpoint system is incredibly forgiving if you do encounter any issues, and I never once felt the urge to rage quit when I encountered these problems, which goes to show just how addictive and awesome Ratchet & Clank: Rift Apart truly is. If you’ve got a PS5, go get this game.

Here are the best prices for Ratchet & Clank: Rift Apart

Should I buy Ratchet & Clank: Rift Apart on physical disc or a digital copy?

If you own a PlayStation 5 Digital Edition, you have to buy a digital edition of every game you want to play which, at the time of writing this review for Ratchet & Clank: Rift Apart, amounted to $124.95 via PSN. PlayStation 5 owners—the ones with a console that has a disc drive—can buy digital or physical games, and prices tend to be more competitive for physical copies, so stick with those where possible. While digital is more convenient, physical is faster to get into a game because you don’t have to wait for a full download: instead, games install from the disc and only the relevant game updates are downloaded.

Ratchet & Clank: Rift Apart isn’t a generation-straddling game, which means you’ll need a PlayStation 5 to play as it as there’s no PlayStation 4 version.

Right now, you can only play Ratchet & Clank: Rift Apart on PlayStation 5. That said, Sony has been steadily releasing games that were once PlayStation exclusives onto PC digital gaming platforms, so there’s a chance this will see a PC release in the future.

What do you get in the Ratchet & Clank: Rift Apart Deluxe Edition?

This is actually called the Ratchet & Clank: Rift Apart Digital Deluxe Edition, which means you can’t buy a physical version of it. The other catch is it costs $139.95. If the price doesn’t deter you, aside from the base game, you also get the following: