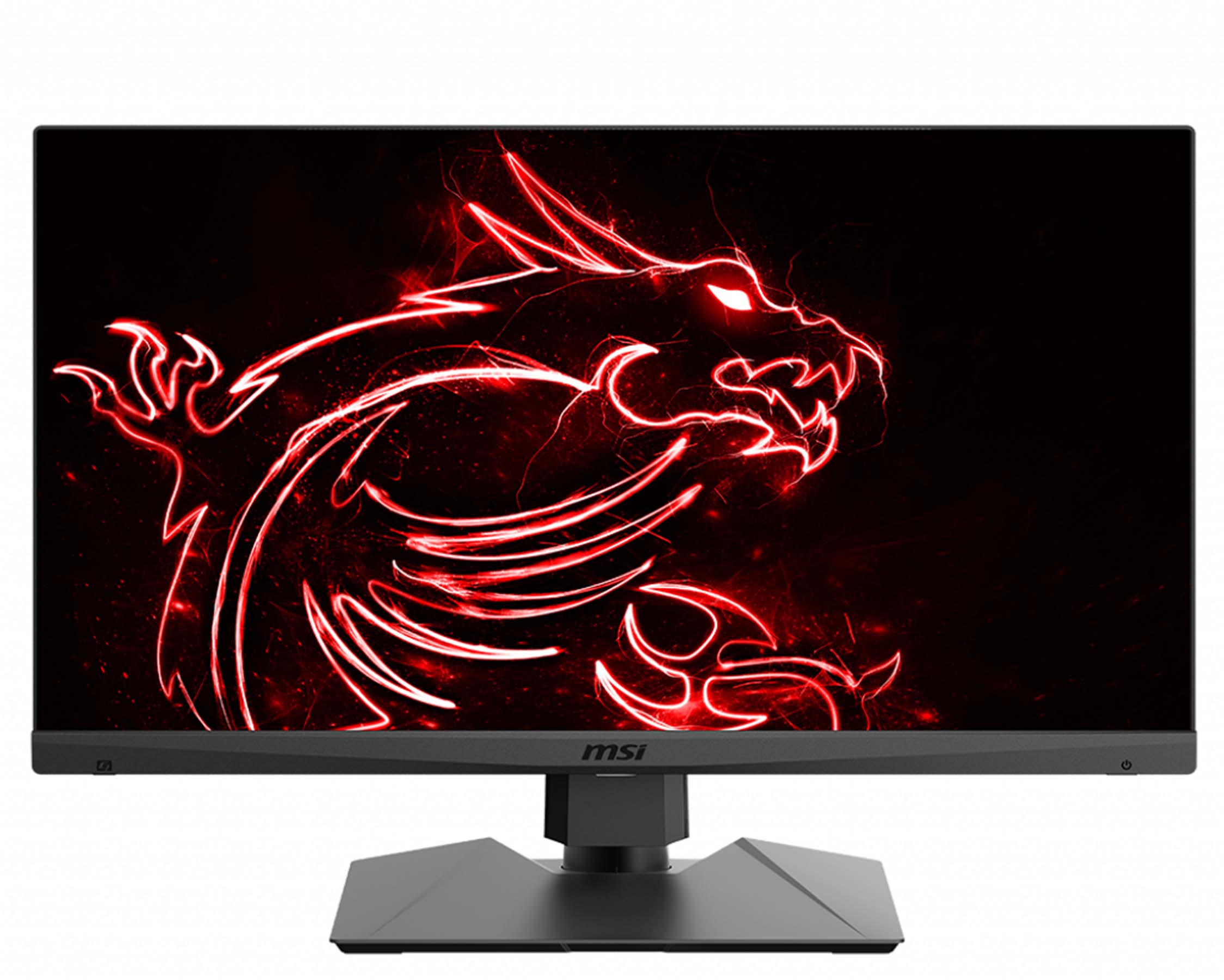 There are a couple of detractors, but overall the MSI Optix MAG274QRF-QD is a gorgeous gaming display with plenty of perks.

See it at MWave

If you’re serious about your gaming, investing in your internal components is only half the battle. After that, particularly for online gamers seeking a competitive edge, it’s absolutely worth buying the right peripherals. Gaming keyboards, gaming mice, gaming headphones are all an important part of the puzzle, but buying the best gaming monitor goes a long way to making games look and play better.

On this front, the MSI Optix MAG274QRF-QD is absolutely worth considering, regardless of whether your PC has an AMD or Nvidia graphics card. While it is a FreeSync monitor, it’s also G-Sync compatible, which offers great GPU versatility, especially if you upgrade between warring GPU factions. This MSI monitor may be marketed for esports, but it also has a beautiful colour gamut that makes it a viable offline gaming or everyday companion, too.

There are some quirks that hold it back from being wholly recommendable—short cables impact the overall versatility in a practical way, while there are manual compromises to make between prettiness and responsiveness—but none of the detractors are major enough to stop the MAG274QRF-QD from being a great gaming monitor. 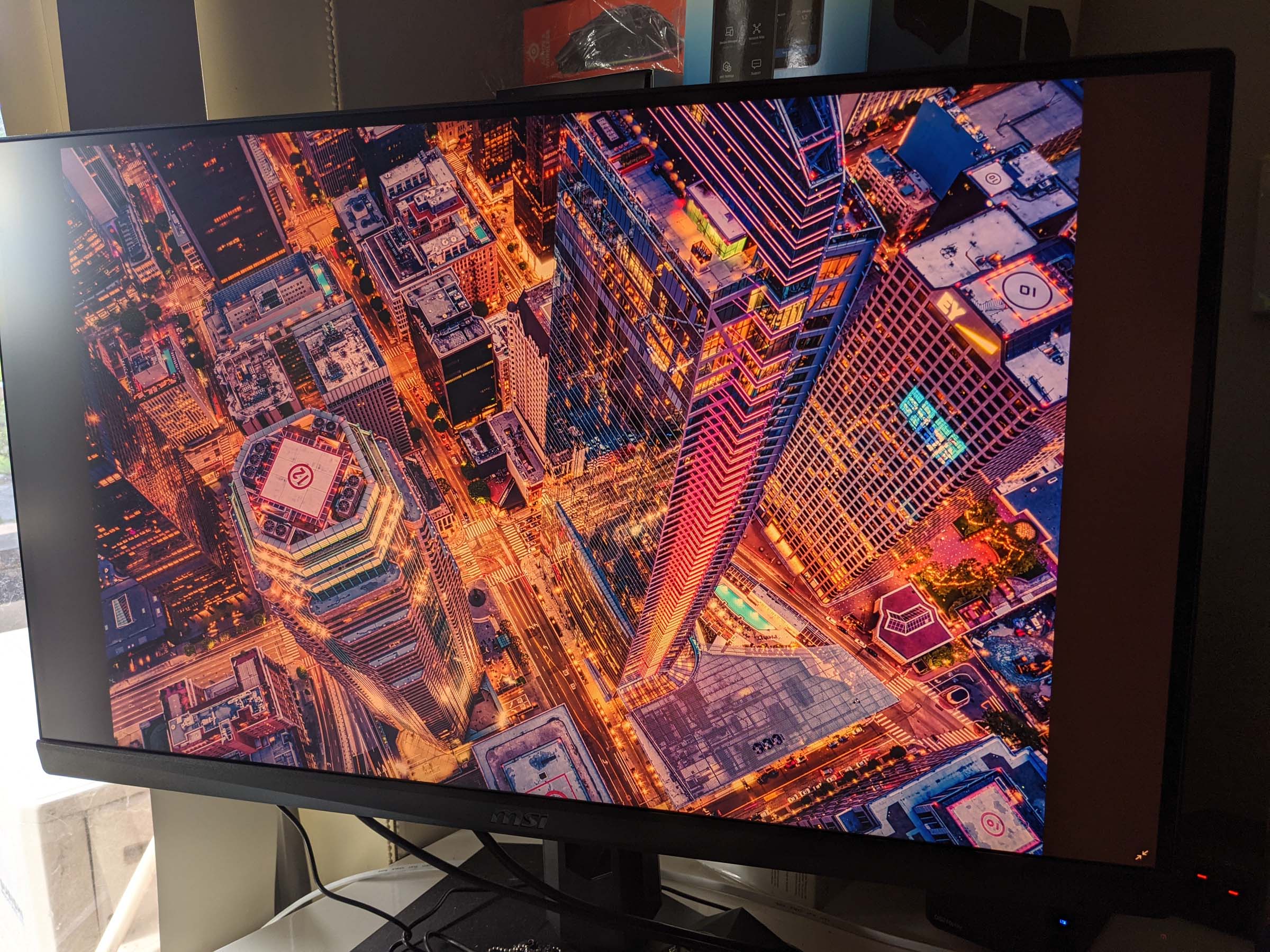 How much does the MSI Optix MAG274QRF-QD cost in Australia?

The MSI Optix MAG274QRF-QD has an RRP of $769, which is a killer price to pay for what you get. For context, my primary gaming monitor has been the Acer Predator XB271HU for the longest time, which has held its value and can still be bought for around the same price, even though it’s older and doesn’t have as many features as the MAG274QRF-QD. The table below shows retailers where you can nab the MAG274QRF-QD for even cheaper.

The MSI Optix MAG272QR-QD gaming monitor comes well packaged with the screen separated from the base. Attaching the base is as simple as tightening a bottom thumbscrew and two Phillips-head screws on the back of the monitor (there are two spares, too). Thankfully, the monitor also comes with all the cables you need—HDMI, DisplayPort, USB and power cables—though they are on the shorter side. 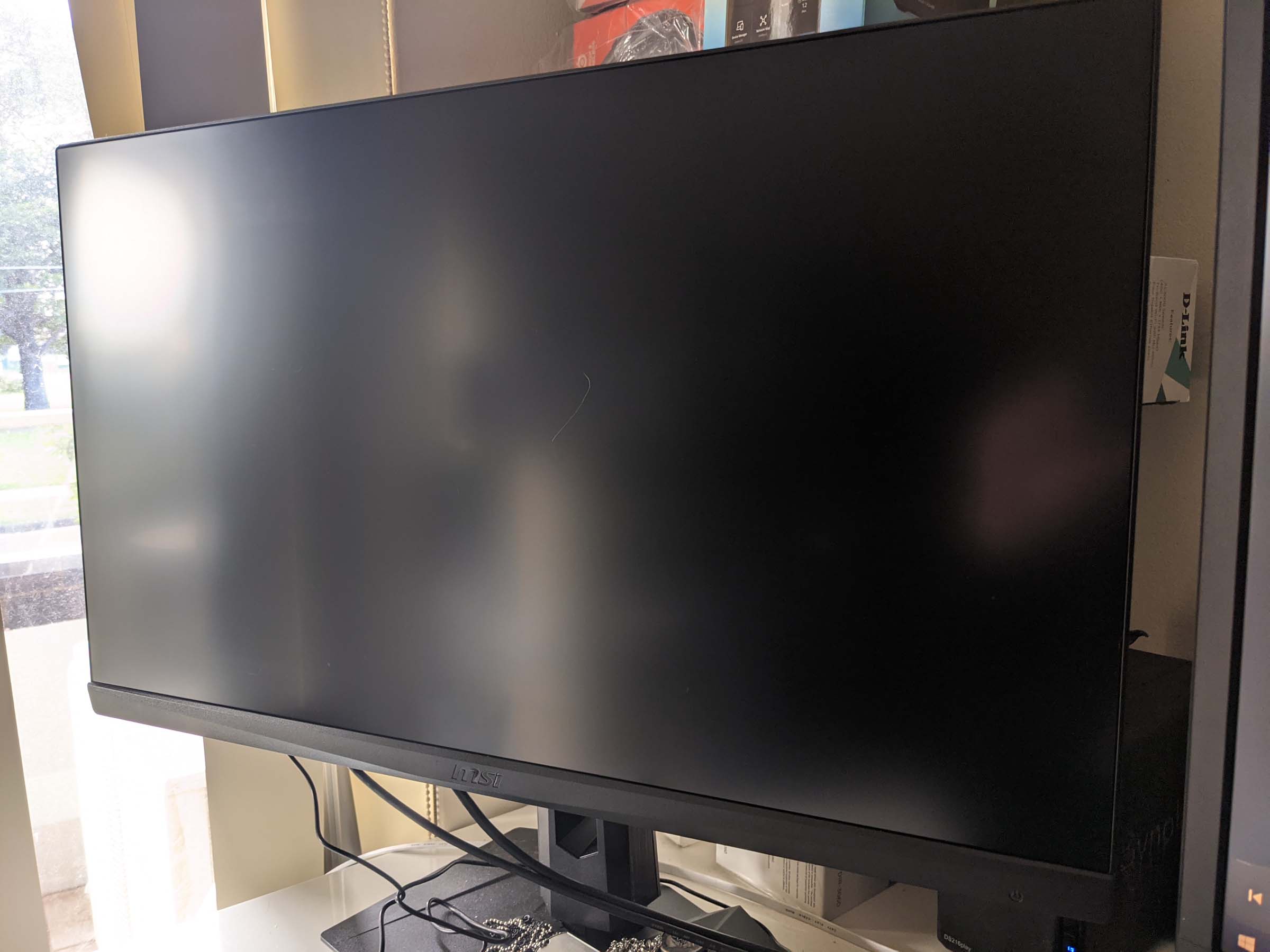 The MSI Optix MAG274QRF-QD is a performant gaming monitor whose specs you can check out below in comparison to the ageing but still popular Acer Predator XB271HU (which is the monitor I used for visual comparisons). 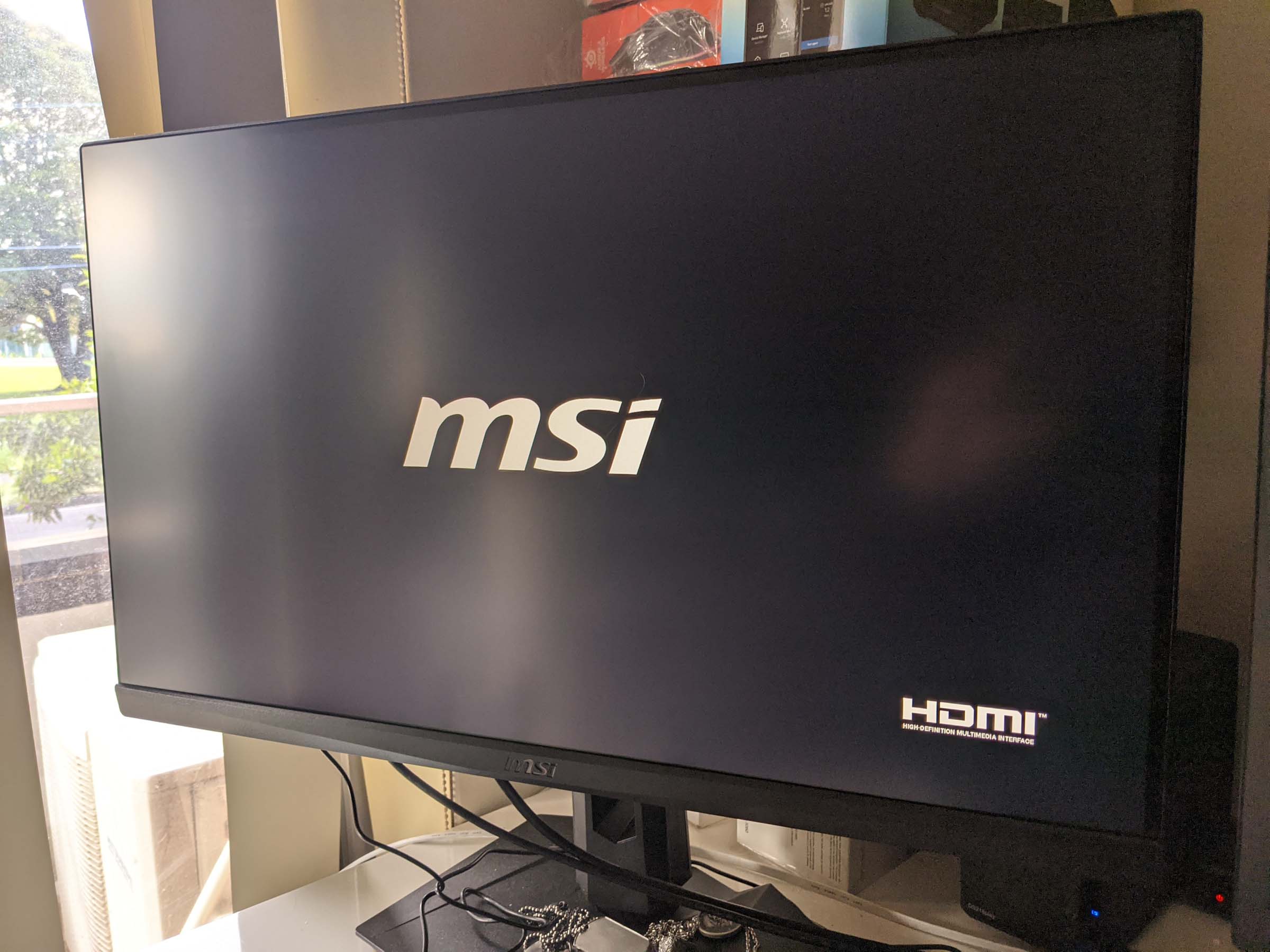 Despite having to attach a base, it only took around 10 minutes to have the MSI Optix MAG274QRF-QD put together and ready to use. This MSI monitor feels robust and well-built and, at 27 inches, this is the right size for a 1440p screen. The only setup disclaimer is that all of the cables feel a smidge too short, from power through to DisplayPort (used for my review) and the USB cable that lets you configure settings via MSI’s GamingOSD software rather than by navigating options with physical buttons on the monitor itself.

The shorter cable length means this MSI monitor is demanding to be a primary screen, rather than an off-centre secondary display. That’s okay, though, because it has the goods to back it up, including RGB on the back for those who want a lightshow that won’t get in your way on the business side of the screen.

Stick with a DisplayPort connection if you want the full factory-overclocked 165Hz, otherwise you’re limited to 144Hz on HDMI. Alternatively, in a very cool move, this MSI monitor also has a USB-C connection that can be used for 165Hz gaming on compatible devices or as a charger. In another nice touch, the MAG274QRF-QD also has two HDMI ports, for connectivity versatility, and two USB-A ports, so it works as a mini-USB hub. Two HDMI ports is a nice touch, especially for those seeking to connect consoles, but there aren’t any speakers in this monitor so you’re reliant on the 3.5mm audio port or, better still, overriding with audio from the console itself.

That said, none of the ports are super easy to get to unless you have the monitor in vertical configuration. On top of this, you need to connect the USB-A to USB-B cable for these USB ports to even work, effectively burning a USB port to gain one. These two ports are also only USB 2.0, so they’re not as fast as the trade-off to gain four USB 3.0 ports on the Acer Predator XB271HU.

Gripes aside, I much prefer controlling a monitor’s settings via an app rather than fiddling around with the physical buttons on the monitor. If you’re okay with the old-school approach, there’s an easy-to-use joystick that can be activated by tapping it in one of the four key directions for basic controls or clicking it in to activate the GamingOSD settings (after a second delay). The only other physical buttons are the power button on the bottom right of the screen and a programmable macro button on the bottom left.

Whether you’re using it via physical monitor controls, Windows software or smartphone app, modifying preconfigured options is a cinch, and most of the settings are mercifully self-explanatory. It’s worth noting that some of the more gamer-centric features like Night Vision are deactivated when HDR is enabled, so it’s worth modifying presets for HDR solo gaming and competitive online gaming. 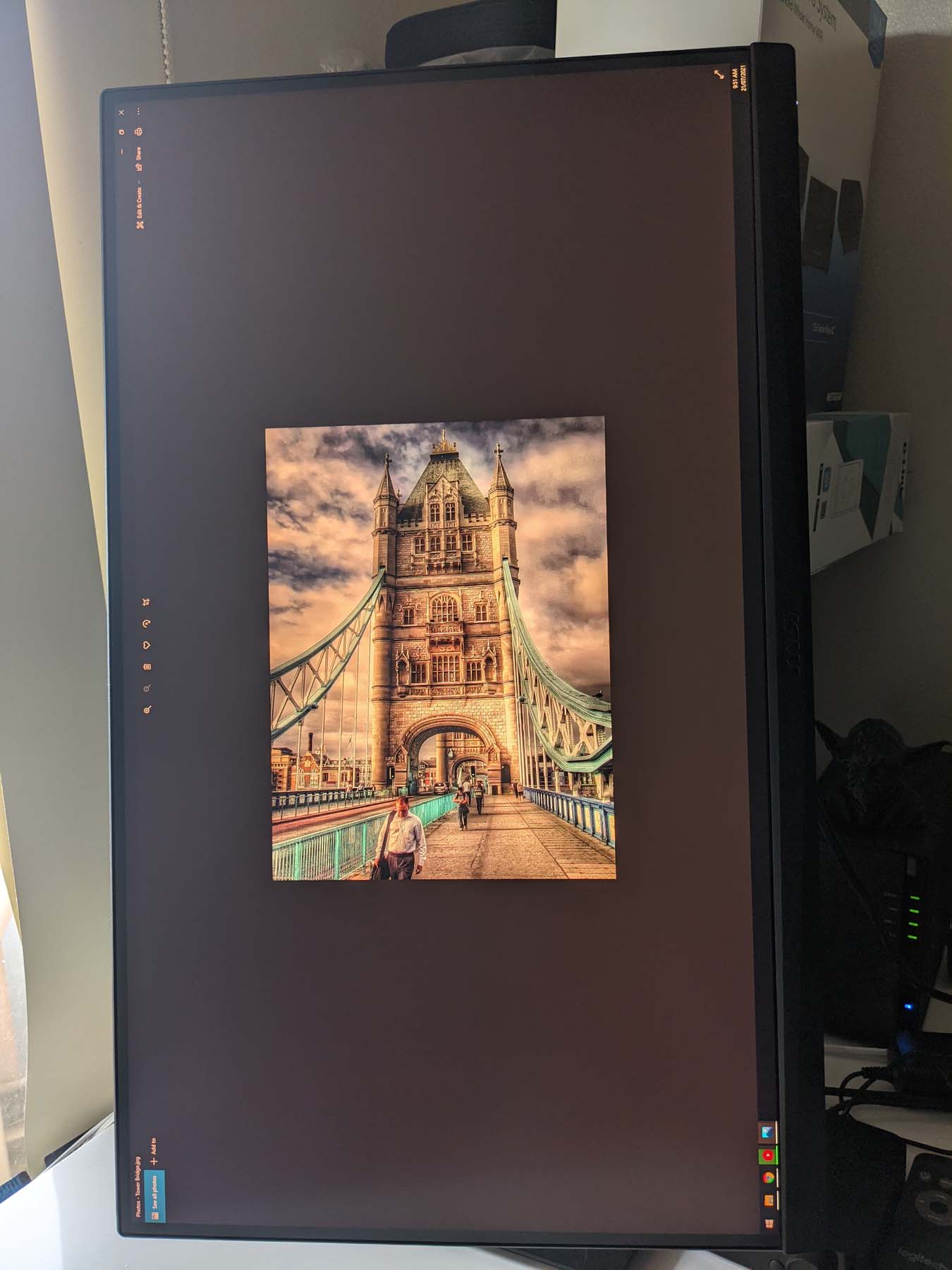 A month ago, when I first connected the MSI Optix MAG274QRF-QD gaming monitor, it was a night-and-day difference between my two other monitors at the time. The first was an older 27-inch Asus monitor where, honestly, there was no contest in comparisons even on the default desktop view. This older Asus monitor had a washed-out look, while my then main screen (the Acer Predator XB271HU), had an immediately noticeable improvement in image quality compared to the ageing Asus screen.

Still, even on default settings and without tweaking, the HDR of the MAG274QRF-QD makes everything from a desktop wallpaper and web browsing through to video playback and gaming look a whole lot better. The only minor disclaimers for the HDR is it’s not the brightest and it doesn’t seem to play nice with text on lighter backgrounds, most noticeable with the dot in the letter ‘i’, the tail on the letter ‘e’ and full stops, all of which appeared as stuck fully lit pixels during my Windows tests. In fairness, this is very specific to particular use-cases which, for me, were the taskbar and WhatsApp desktop software.

The bigger compromise is if you want HDR gaming, you can’t tap into all of of the MAG274QRF-QD’s competitive features. Because this is marketed as an esports monitor, there’s a good chance you’re considering buying the MAG274QRF-QD to gain a competitive edge in online multiplayer, which means you’ll want to disable HDR so you can activate the great Night Vision feature.

This baked-in feature ups the brightness in darker areas, which is a viable replacement over using things like Nvidia filters to artificially improve visibility in high-lethality, highly competitive games like Hell Let Loose or for tackling the Rose-skin dark-corner campers in Call of Duty: Warzone. Sure, you’re sacrificing colour depth by disabling HDR, but the MAG274QRF-QD already has an impressively wide colour gamut, combined with the high contrast ratio of a rare flat-screen VA panel (which are usually either IPS or TN).

There’s another technical compromise to make to eke the most out of the MAG274QRF-QD, too. While it can have a response time as low as 1ms, this comes by activating Anti Motion Blur which, in turn, disables FreeSync (otherwise it’s at 4ms grey-to-grey response time). For those unaware, FreeSync is an AMD-developed adaptive-synchronisation technology that reduces and removes screen tearing and stutters. It makes for a more pleasant playing experience when enabled and, with the MAG274QRF-QD, it is also compatible for those who have G-Sync-compatible Nvidia graphics cards (like the recently reviewed Nvidia GeForce RTX 3070 Ti).

Normally, I wouldn’t labour these points but given that it’s being sold as an esports screen, these sorts of detractors will be lessened or greatened depending on whether you want a ‘full-sweat’ display for 165Hz ultra-responsive gaming or whether you’ll take the slight responsiveness sacrifice for a prettier overall image. 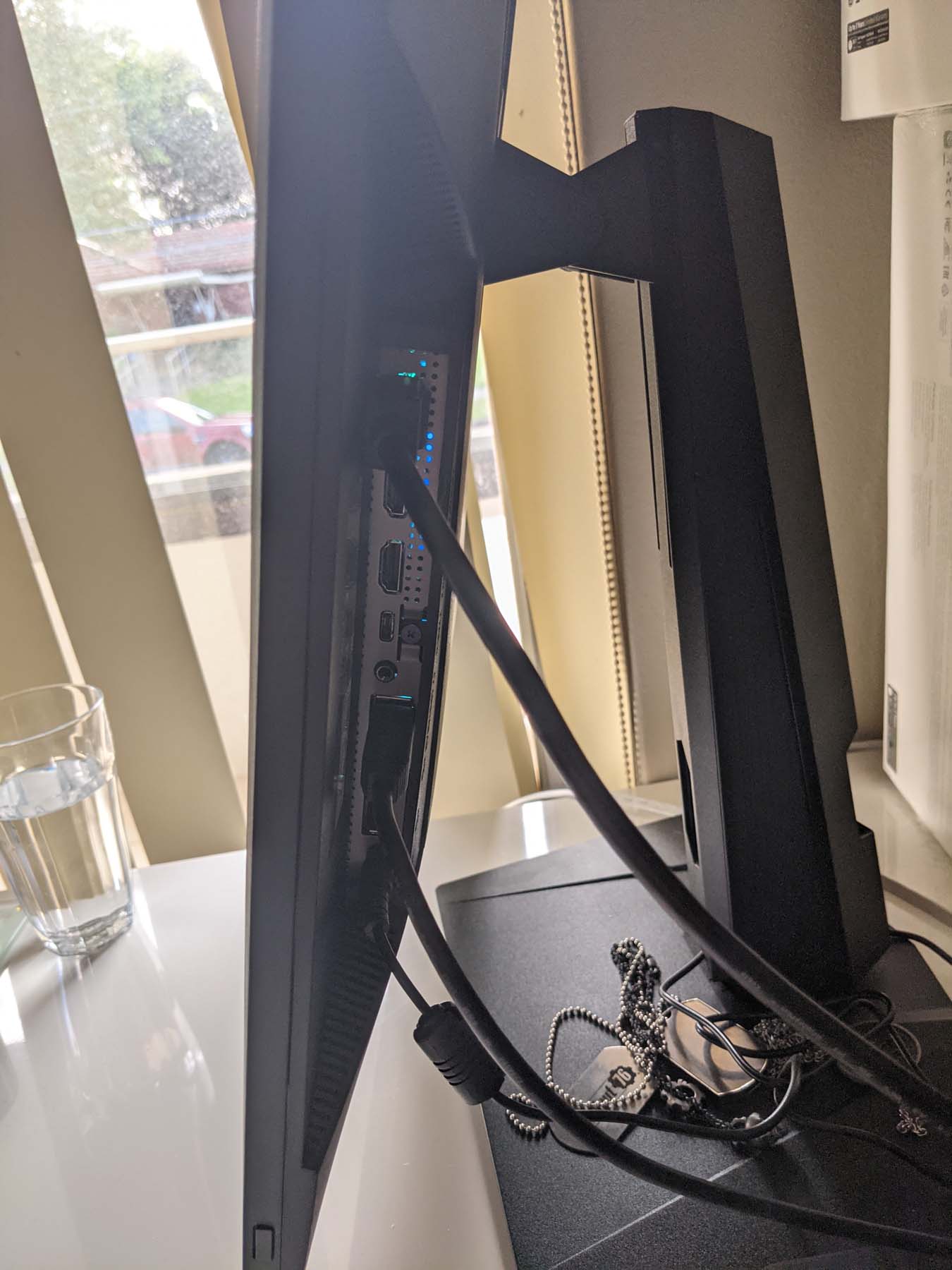 Is the MSI Optix MAG274QRF-QD worth it?

At $769RRP, the MSI Optix MAG274QRF-QD is absolutely worth purchasing (more so if you can get it cheaper). If you’re in the market for a new monitor and don’t like the curved-display trend, the MAG274QRF-QD boasts a gorgeous VA panel with a wide colour gamut that makes everything you do on-screen pop. There are some compromises to be made—HDR on or off, Anti Motion Blur or FreeSync—but, for the most part, this is a killer addition to any gamer’s peripheral arsenal.