May the Fourth: The Rise of Skywalker arriving on Disney Plus

Where the Frik is Episode IX streaming?

The Rise of Skywalker is available on digital services but Australians don’t get access to 4K and select bonus features.

When Disney announced Frozen 2 and Onward would be fast-tracked to Disney Plus, the world waited with bated breath for the House of Mouse to announce a similar treatment for Star Wars: The Rise of Skywalker. That never happened, and while Australia did get a digital release of Star Wars: The Rise of Skywalker (iTunes, Google Play etc.), there was still no option for streaming it in 4K. However, Disney has finally announced that Star Wars: The Rise of Skywalker will release on 4 May 2020 (i.e. May the Fourth, Star Wars Celebration Day in the US). What's unclear is whether Australia will get ROTS on our May the Fourth (a day earlier than the U.S.), or at the same time as the U.S., 5 May 2020 for us. Disney Plus Australia currently lists 4 May 2020 as the release date (as seen in the screenshot below) but we've reached out to a Disney Plus rep for confirmation. 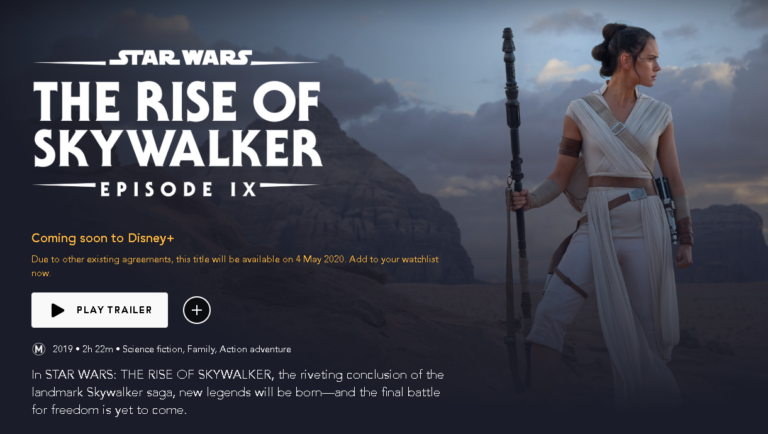 Considering every other Star Wars movies streams in 4K on Disney Plus (even the classics), we're to assume it will be the first opportunity for Australians to re-watch 2019's finale in Ultra High-Definition.

Thinking of signing up for the Disney Plus free trial on May the Fourth? We've scheduled a full week of streaming for your first 7 days free.

If you’re already subscribed check out our top picks for the best Disney Plus Movies and Disney Plus TV Shows.

How to watch The Rise of Skywalker online

In Australia, Star Wars: The Rise of Skywalker is now available to stream on iTunes, Google Play, YouTube, and Microsoft Store. Pricing and video quality is the same across each service, except iTunes which seems to only offer a HD version.

The other difference between each service is the bonus features included.

Disney Plus subscribers can stream The Rise of Skywalker from 4 May 2020 but at the time of writing, the special features are still to be announced.

Strangely, the U.S. Microsoft Store offers Star Wars: The Rise of Skywalker in 4K and a handful of extras but Australians are restricted to the HD version and one feature-length documentary.

When will The Rise of Skywalker release on Disney Plus?

Star Wars: The Rise of Skywalker releases 4 May 2020 on Disney Plus.

Disney dropped its Pixar flick Frozen 2 a whole three months early on Disney Plus and followed up with an early release of Onward. However, The Rise of Skywalker never received the same treatment.

We'll know more about the special features available on Disney Plus come May the Fourth. Stay tuned.

What other Star Wars flicks are available to stream?

Disney Plus has every other core Star Wars film (Episodes I to VIII) in glorious 4K, its own original series The Mandalorian, the popular animated shows Star Wars: Rebels and Star Wars: The Clone Wars (including the Disney Plus-exclusive seventh season) and a mountain of documentaries, featurettes and kids shorts, such as the Star Wars Lego series, BB-8’s Blips shorts, Star Wars Resistance and more.

Disney Plus has a free 7-day trial if you want to jump in the cockpit and take it for a Kessel Run.