How to watch Onward online with a free trial

Disney Pixar’s big 2020 film has parked itself on Disney Plus, iTunes and more.

Stream it on Disney Plus

On the road again.

Every day, more and more studios are fast-tracking theatrical releases for home digital services. After Universal announced its latest kids flick Trolls: World Tour would be hitting streaming services soon after its release in April, Disney Plus subscribers were surprised with Frozen 2 three months before intended for home entertainment. Then it went one step further, accelerating the release of its 2020 roadtrip feature, allowing Australians to watch Onward online early.

Onward released on iTunes and Microsoft Store 3 April 2020, closely followed by a Disney Plus release on 24 April 2020.

If you’re already subscribed check out our top picks for the best Disney Plus Movies and Disney Plus TV Shows.

And if not, find out how to max out your first 7 days with our viewing guide.

Stream Onward on Disney Plus

What is Disney Pixar’s Onward about?

A mythical road trip adventure, Onward is set in a fairytale world where modern-day, real-world technology has replaced the need for magic. Two elf teenagers, Ian and Barley Lightfoot (Holland and Pratt) hit the road on a mission to track down a gem with the power to restore their father, who passed away before Ian was born, for a single day. 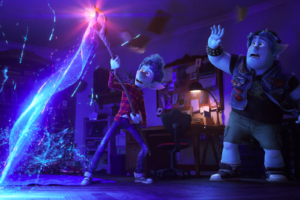 Here's where to watch Onward online in Australia