If only the battery life were better. 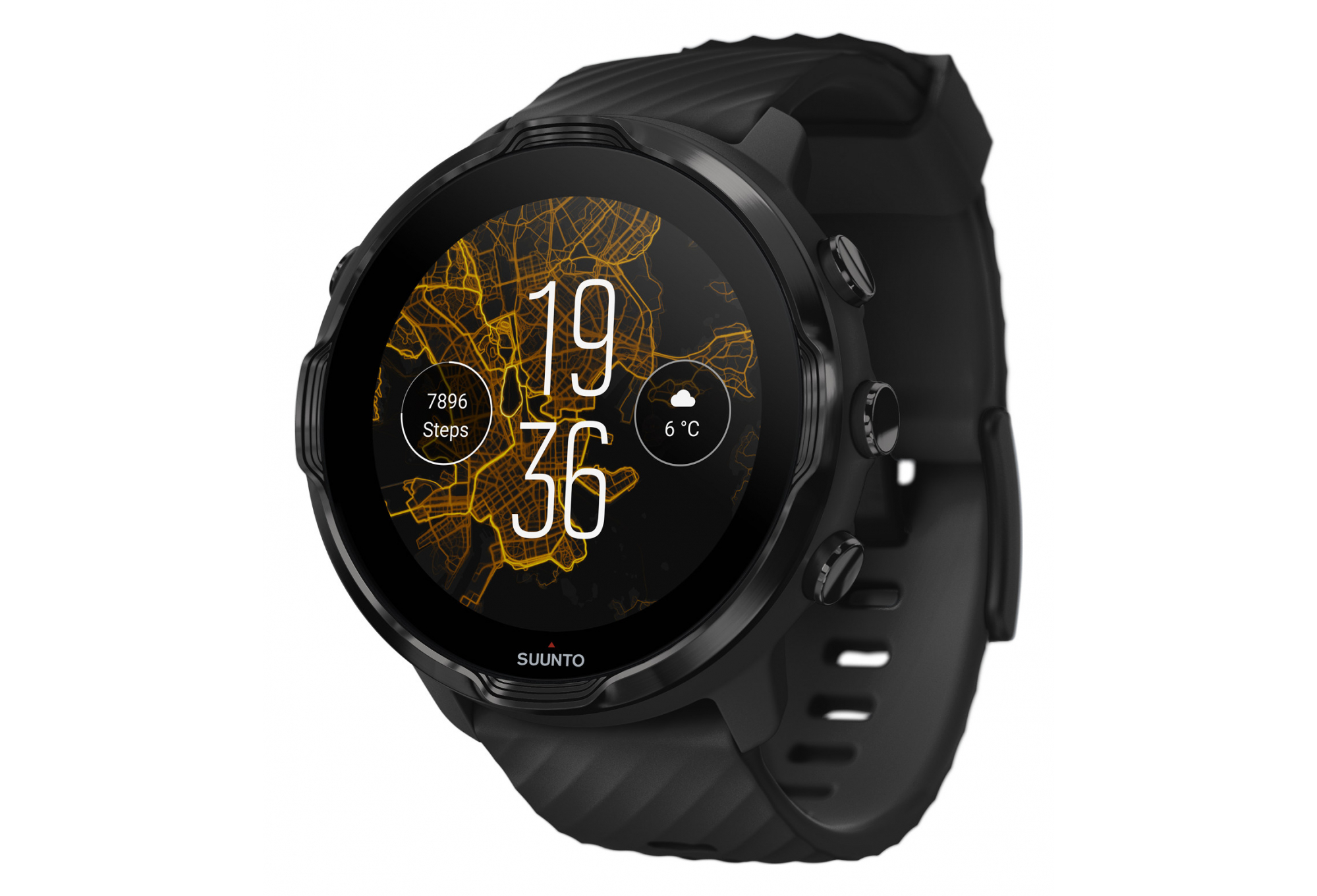 The Suunto 7 is a good smartwatch that just misses out on ‘great’, with middling battery life and no sleep tracking dragging it down. On the plus side, the display is gorgeous, smooth and responsive, and the watch it’s absolutely packed with activity tracking features that athletes (both amateur and professional) will love.

Launched late last year, the Suunto 7 is the Finnish watchmaker’s first attempt at a fully-fledged smartwatch, combining the fitness tracking chops we’ve come to expect from Suunto with the smartphone connectivity of Google’s Wear OS. It sounds like a match made in heaven on paper, but just how does it work out in practice? While Suunto’s own tech is hard to beat, it’s Wear OS that happens to be the Suunto 7’s Achilles heel, dragging down what would otherwise be a fantastic fitness-focussed smartwatch.

A welcome price cut makes for a decent deal.

When the Suunto 7 first launched, its RRP was an eye-watering $799. Since then, the price has dropped to $599, putting it on par with the entry-level Garmin Fenix 6s and the Apple Watch Series 6. At this price, it’s a far better deal, albeit still on the high-end of the smartwatch pricing spectrum.

For your money, you get access to over 70 sports modes, free offline outdoor maps, inbuilt GPS, altimeter, heart rate monitoring, Google Fit, Google Assistant, Google Pay and all in a 50m water, dust and shock resistant body. That’s pretty much exactly what we’d expect from a smartwatch at this price point, though we would’ve liked to see the inclusion of an SpO2 sensor or ECG function, both of which can be found on the Apple Watch Series 6.

A chonky boi, but a beautiful screen.

The Suunto 7 is not made for small wrists. The included watch strap certainly caters for them, but the actual body of the watch, though fairly lightweight, is downright chonky. At about about a centimetre from wrist to face, it’s kind of hard to miss, especially when you opt for the Black Lime version, like the one I tested. If that doesn’t tickle your fancy, the Suunto 7 also comes in full Black, Graphite Copper, Sandstone Rose Gold, White Burgundy and a limited-edition Graphite. 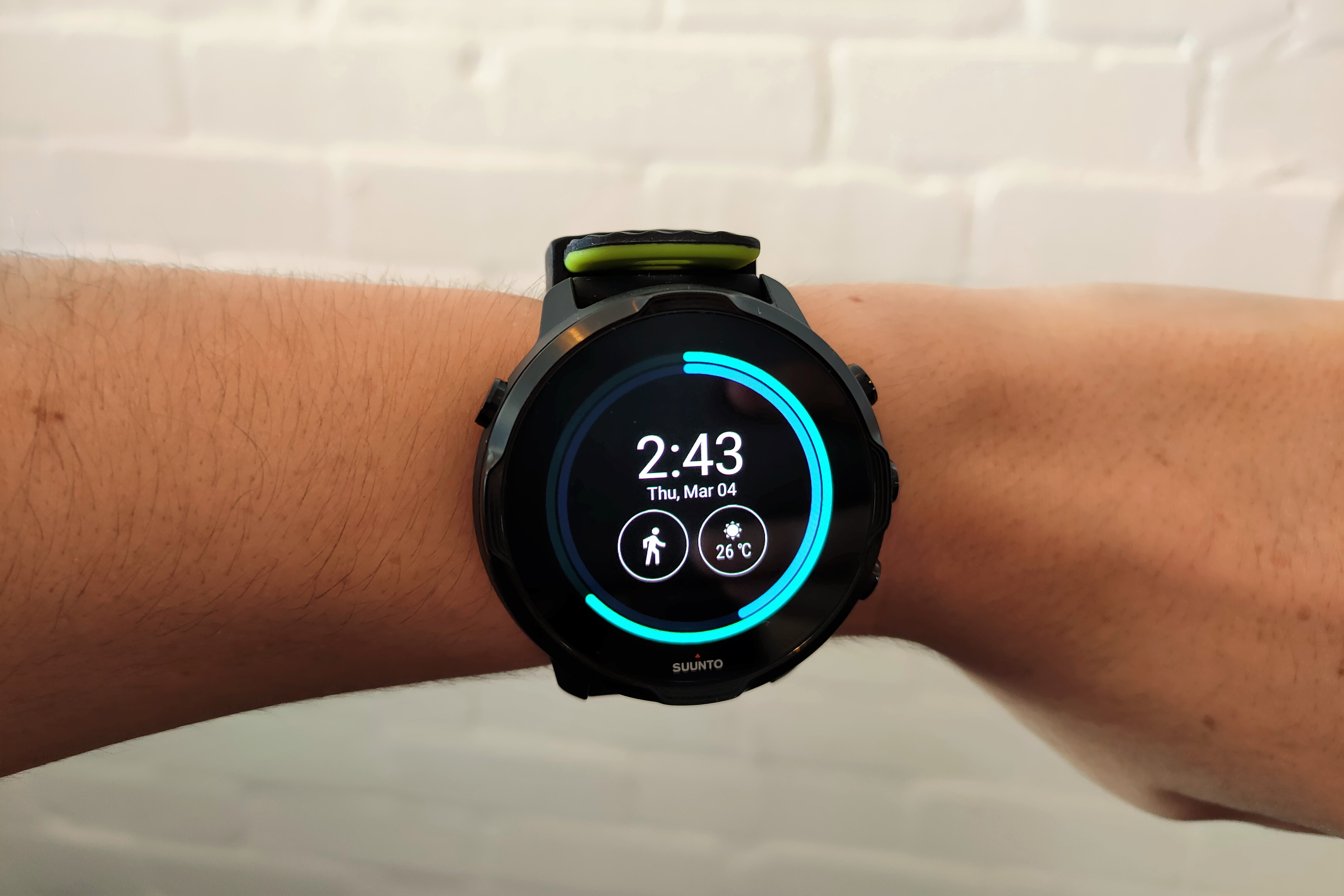 While it’s not the sort of thing you’ll wear with a gown to your best mate’s wedding, it’s perfectly fine for everyday use, and actually looks pretty damn good on larger wrists. It’s also quite comfortable, given its large size, thanks to the soft silicone band and matte glass fibre-reinforced plastic casing.

The display is perhaps the best part of the Suunto 7. It’s smooth, responsible, vibrant and oh so crisp. Really, I have nothing even remotely negative to say about it. It also happens to be protected by Gorilla Glass, so it should be reasonably durable as well.

Around the edge of the Suunto 7, you’ll find a stainless steel bezel and four buttons. They’re fully customisable, so you can make them launch your favourite app, open your Google Pay wallet, start a workout and more.

Like most Suunto watches, the Suunto 7 is a sports tracking powerhouse. Sure, there’s the usual running, cycling and swimming, but you’ll also find roller skating, horseback riding, frisbee and handball, to name just a few. The Suunto tracking app is unmatched thanks to its super-accurate GPS and heart rate tracking, but because of the watch’s Wear OS integration, your data kind of ends up all over the place. Steps will go to Google Fit, workouts can go to either, and heart rate goes to both. I get that Suunto is trying to offer the luxury of choice, but in practice, it’s all just a little confusing - and things get even more complicated when you introduce third-party apps like Strava and MapMyRun.

One area that lets the Suunto 7 down - and a real downfall of Wear OS as a whole - is the lack of a sleep tracking app. Both the cheaper Suunto 5 and more expensive Suunto 9 (along with basically every Fitbit and Apple Watch) offer a native sleep tracking app, but if you want anything like that on the 7, the closest you’ll get is the Sleep As Android app, a third-party program that isn’t the most user-friendly or accurate thing in the world. It’s a real shame, given most other smartwatches in this price point (and even lower) have some sort of sleep tracking ability.

On the other hand, there are some perks to that Wear OS integration, like the ability to receive notifications, respond to calls and text messages and control music, all of which worked pretty flawlessly in my testing. That said, even Suunto’s own OS (found on the 5 and 9) can notify you of new emails, messages and calls, though you can’t respond.

The Suunto 7’s quirks are relatively easy to forgive, but if there’s one thing I hate in a smartwatch, it’s having to charge it every night. Unfortunately, this is one of those smartwatches.

I’m not even a super active person - I average a walk a day, maybe a HIIT workout if I’m feeling particularly inspired - but even my reasonably sedentary lifestyle, paired with a moderate amount of smartwatch-y activities like replying to messages or checking notifications, drained this baby dry.

On a very lazy day, I could maybe eke out a day and a half of battery life (if I was lucky), but given Suunto’s target market is people who actually exercise, it’s pretty disappointing. Even more so when you compare it to its siblings, the 5 and the 9, both of which will keep you going for up to a whole week with 24/7 tracking and phone notifications enabled.

There is a decent power saver mode, however, it essentially turns your smartwatch into a dumb watch, showing only the time and date. That said, it’s a good way to extend battery life, even if only for an hour or so a day.

Is it worth it

Only if you don’t mind a daily charge.

The Suunto 7 sounds so good in theory, and I had truly hoped it would live up to its impressive spec sheet and feature list. Sadly, that’s not quite the case. While the Suunto 7 is a great fitness tracking watch with a gorgeous display and some welcome smart features (notably Google Pay and the ability to respond to calls and texts), its disappointing battery life feels like too big of a compromise.

If you’re not phased by having to pop your watch on the charger every night when you hit the hay, you’ll be more than happy with the Suunto 7. However, if you prefer something with better longevity, Suunto’s other offerings will suit you far better.