Three LCD chips are better than one.

Epson are adding to their home entertainment lineup with a new 4K laser projector.

The newly-launched EH-LS12000B 4K PRO-UHD promises to pair up the prowess of an Epson-branded picture processor with more precise pixel-shifting.

The former, which Epson said is its most advanced video processor to date, is responsible for making sure the projector actively enhances the resolution, colour, contrast of content played on it. It also handles frame interpolation, which can assist in making vertical scrolling content smoother to behold, and ensures support for 10-bit HDR content.

When it comes to lumens, the new Epson EH-LS12000B 4K PRO-UHD laser projector boasts 2700 lumens of colour and just as many lumens of brightness. In practice, Epson said that this should curb the impact of any unwanted ambient light on your home theatre experience.

Of course, the rest of the hardware here is just as critical. The Epson EH-LS12000B 4K PRO-UHD laser projector is armed with a trio of LCD chips that work together to display 100 RGB colour for every frame without compromise. It’s often said that the light that burns twice as bright burns for half as long, but Epson claims that the new projector has a lifespan of 20,000 hours of usage and almost no warm-up or cool down time between uses.

While it’s very much pitched towards the home cinema crowd, Epson also say that these technical gains also make the possibility of gaming on something like the Epson EH-LS12000B 4K PRO-UHD laser projector a little more viable than previous models. The new projector boasts not just HDMI 2.1 compatibility but also support for gaming at 4K in up to 120 frames per second (where the source supports it). 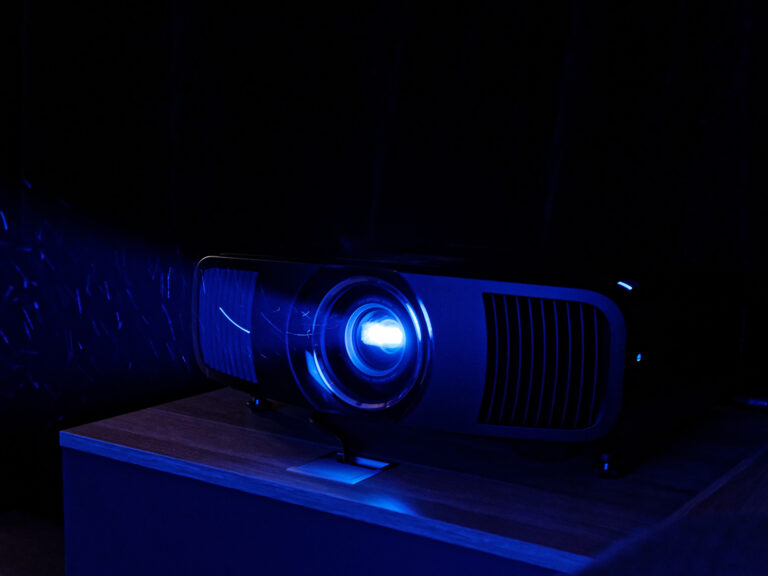 In Australia, the Epson EH-LS12000B 4K PRO-UHD laser projector is available now from authorised retailers at an RRP of $8999.

While comparisons to similarly-priced 8K televisions from Samsung and LG are natural, it’s worth noting that the Epson EH-LS12000B 4K PRO-UHD laser projector supports screens of up to 120-inches in size while most mainstream TVs cap out at between 90 and 100 inches. If you’re looking to watch content on a screen that big, projectors tend to be the way to go and Epson are hoping that the combination of pixel-shifting and processor tech here will catch your eye.