The De'Longhi Dedica Arte is a cheap coffee machine with an acquired taste. 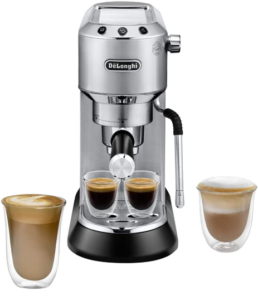 The De'Longhi Dedica Arte is compact enough to compete with those who prefer pod coffee machines, but its inherent "incompleteness" may make it an imperfect fit for anyone who haven't invested in or aren't willing to pick up a grinder to go with it.

If you produced a composite that represented the average coffee machine, and then cut away the excess, you'd have something that looks a lot like that De'Longhi Dedica Arte.

Coffee machines are all about reducing and avoiding complication, and the Dedica Arte pushes this idea to a polished extreme. For many, the appeal of products like the Dedica is less about the need to have access to barista-style coffee at home and more about this desire for "uncomplicated" coffee.

The De'Longhi Dedica Arte plays to this crowd, emphasising focus in lieu of flexibility. It's a coffee machine designed to fill a gap in your kitchen, not service all needs.  It's not a great place for newcomers to start, but there's something to be said for it as a place to end up if already own a dedicated grinder and like your hardware lean as well as lavish. 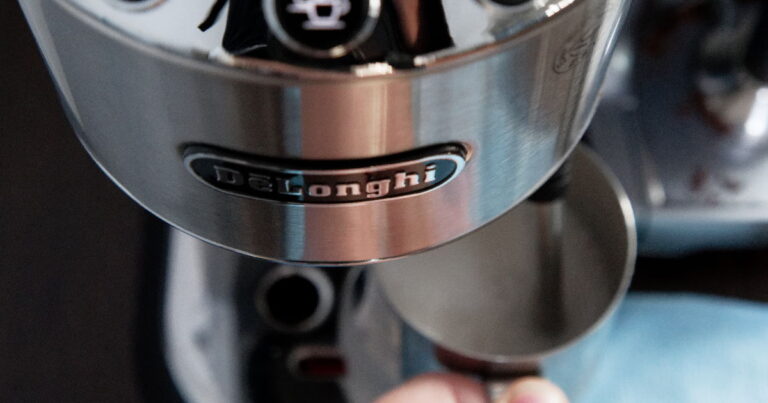 How much does De'Longhi Dedica Arte cost in Australia?

The home espresso experience for the price of a pod machine

That said, compared to an entry level coffee machine like the Sunbeam Barista Max, both the De'Longhi Dedica and the De'Longhi Dedica Arte do not feature a built-in coffee grinder. Unless you're comfortable with the idea of buying pre-ground coffee beans regularly, you're going to have to invest in buying a grinder to go with either Dedica.

Check out the table below for a round-up of how each Australian retailer rates when it comes to pricing for the De'Longhi Dedica Arte coffee machine.

No grinder, all shine 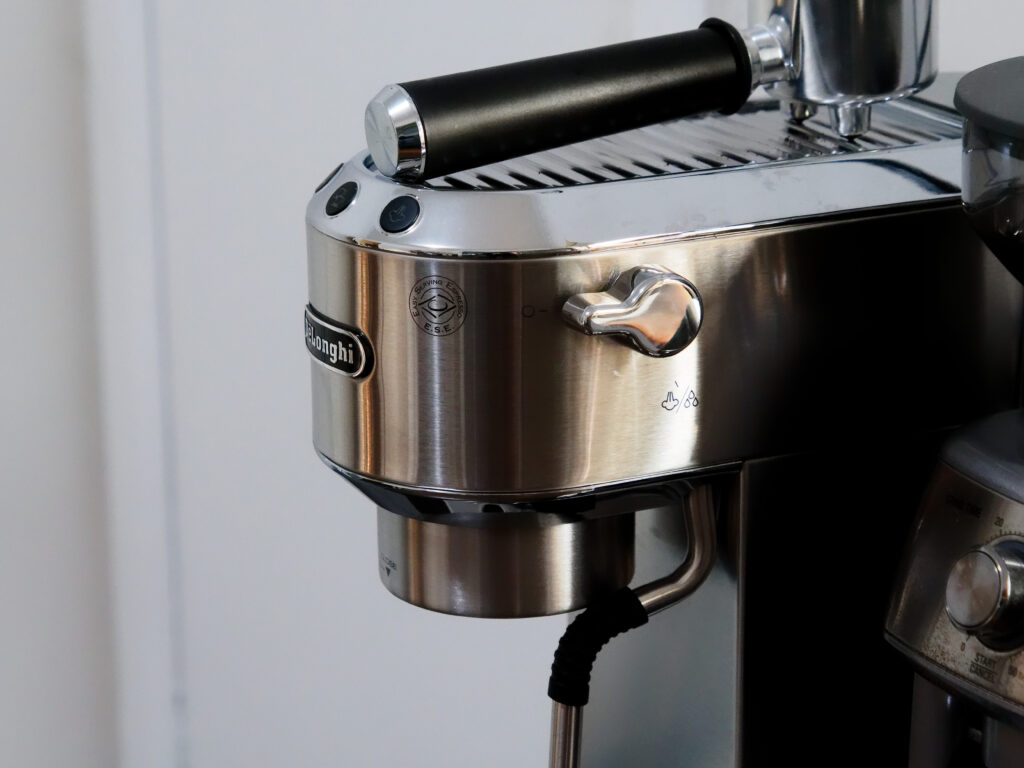 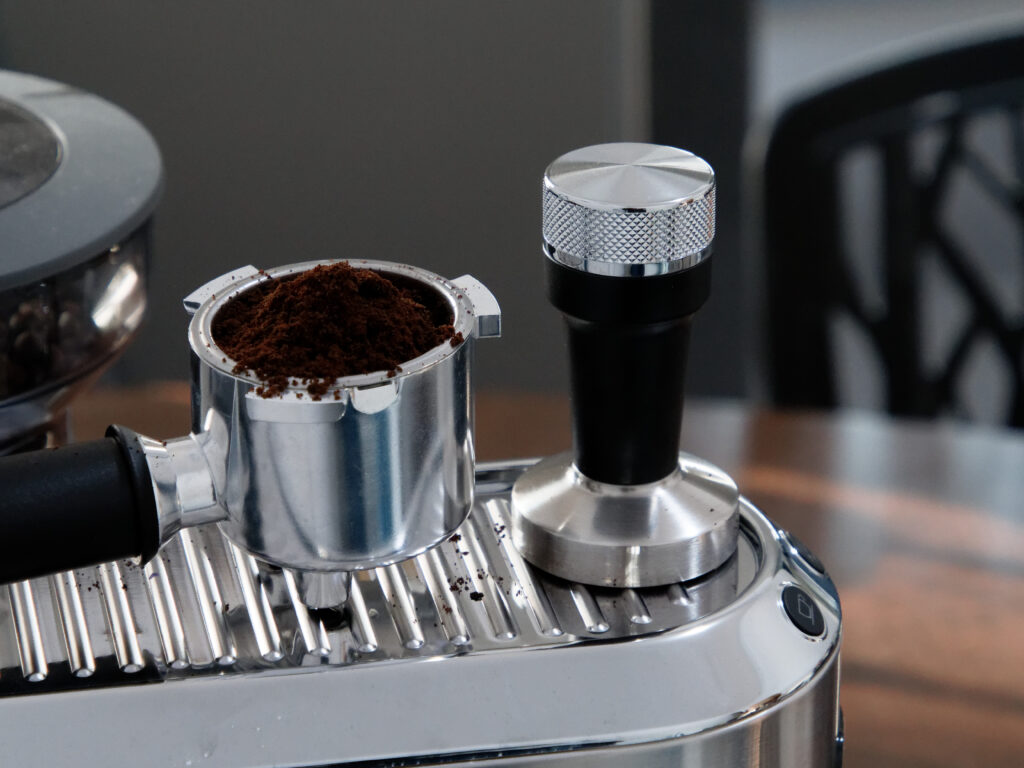 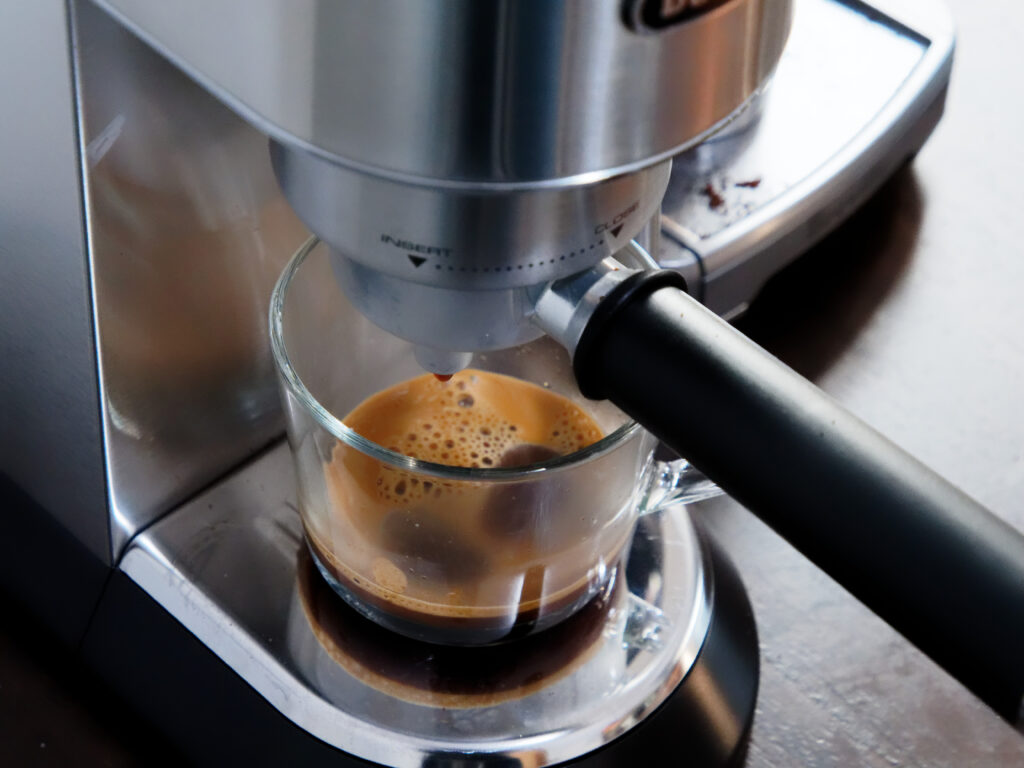 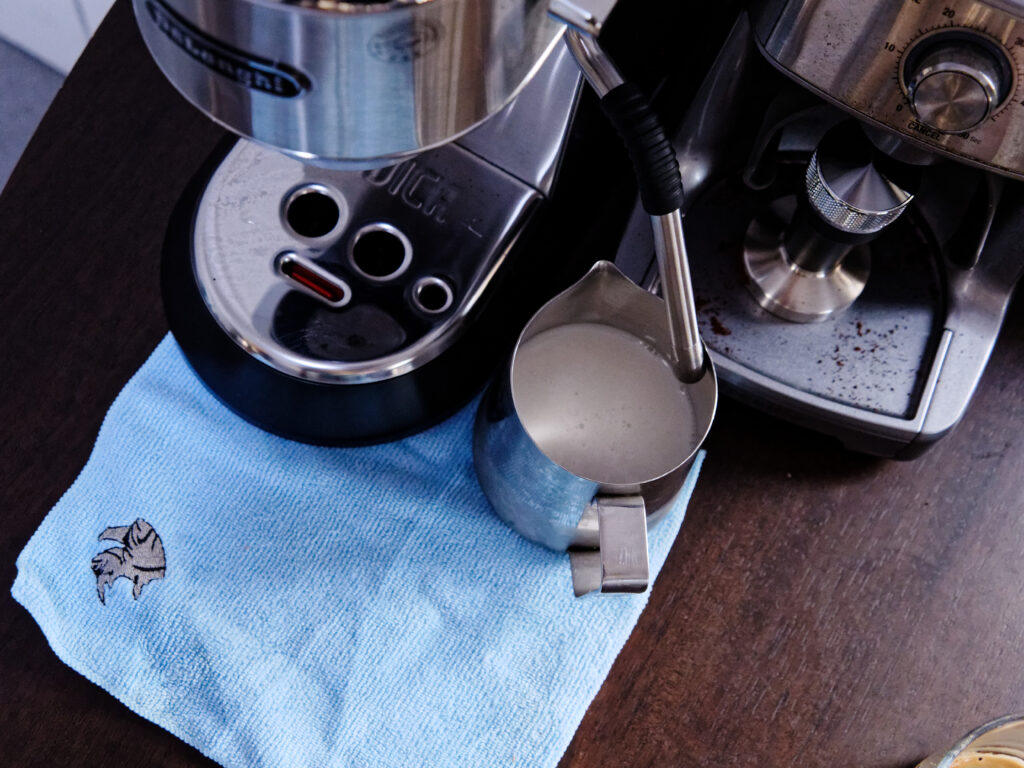 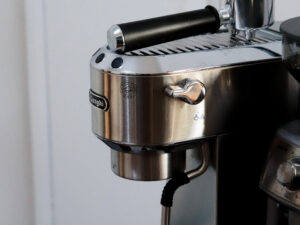 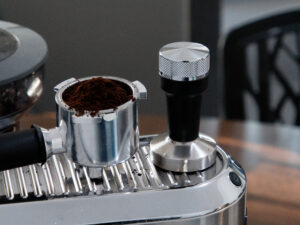 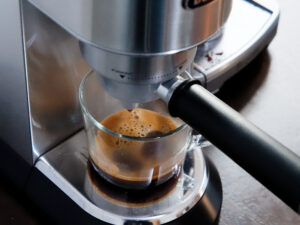 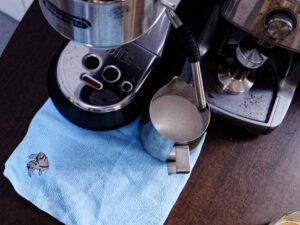 When it comes to the form-factor and the space it demands on your kitchen bench, the De'Longhi Dedica Arte veers closer to the physique of pod machines like the Nespresso Vertuo Next than other manual espresso machines.

It's rectangular rather than square. There's a trio of buttons on the front, a lever on the side and a power key perched towards the back. These keys cover the basics: single shot, double shot and control of the built-in steam wand.

Below that sits the espresso pump itself. The De'Longhi Dedica Arte comes pre-assembled, and the process of making espresso here is more or less identical to how its handled by other manual coffee machines. You load up the group handle with grinds, tamp them down, slide the handle into the Dedica and then hit the appropriate button.

Despite the big picture simplicity, there were a few small details here that sometimes snagged me during my attempts to use the De'Longhi Dedica Arte. Rather than the front-facing or semi-automated power buttons encountered elsewhere, the Dedica's on/off switch is easy to miss and easier to forget about between uses.

While the machine does come with two filters, suited for single and double shots respectively, squeezing these into the group handle sometimes felt like a struggle. This is a partially a testament to the tight grip that the latter has on the former, but it proved an unexpected source of friction that I didn't encounter with the De'Longhi Dedica Arte's many coffee-making counterparts.

Akin to the pod machines its design echoes, the back of the Dedica houses a 1.1 liter water reservoir. This is fairly easily to attach and detach as needed, which helps offset the fact that you'll be doing it fairly often.

The last thing worth talking about here is what isn't. As mentioned above, the De'Longhi Dedica and De'Longhi Dedica Arte both lack a built-in grinder. Unless you're planning to pick up some pre-ground coffee beans, you'll need to invest in one to actually use either. This makes the practical cost of picking up De'Longhi's cheapest manual espressso maker a little higher than it appears.

If you already own a grinder, this is naturally less of an issue. However, if you're coming to coffee makers from a more fresh perspective, then the the trade-off to the cheaper price commanded by the De'Longhi Dedica Arte is going to crop up sooner rather than later.

A solid foundation that irks too easily 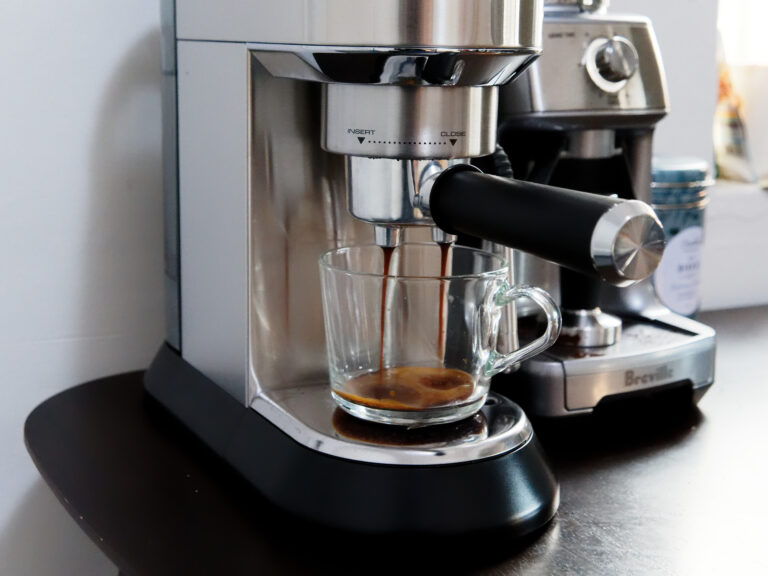 It's hard to endorse the De'Longhi Dedica Arte without acknowledging its biggest caveat. It's not really an all-in-one solution like De'Longhi Magnifica S, and you're going to have to find a solution to its intrinsic shortcomings to get any use out of it.

Still, used alongside a coffee grinder that I already owned, I was mostly satisfied with the results that De'Longhi Dedica Arte delivered. Even by the standards of home espresso makers, the Dedica works fast. It takes about 40 seconds for the machine to warm up and less than half that to pump out an espresso shot.

Maintenance of the Dedica is similarly straightforward and streamlined. The water tank is easy to detach, and the steam wand takes only a second to wipe down.

Given the natural limitations of this machine, there's not much else to it. Still, there were a few areas where the constrained design choices here proved less elegant and more frustrating.

For example, the narrowness that makes the De'Longhi Dedica Arte look like such a sleek inclusion on a given kitchen bench also make it a poor fit for larger vessels like mugs.  De'Longhi do note that you can remove the drip tray to accommodate larger cups. Realistically though, you're using this thing with a smaller cup or not at all.

Similarly, I found that emptying out used grinds from the group handle proved more finicky here than elsewhere. While having the filters be held in place by a mechanism made of metal wires works well at the start of the process, it can make cleaning up afterwards feel like more of a chore than it should.

There's a similar sort of dynamic at work with the steam wand hanging next to the espresso pump on the De'Longhi Dedica Arte. While this inclusion is functional enough, I found it a struggled to get the rigid arm on the spout to play nice with even smaller milk mugs. The fact that the Dedica Arte doesn't come with an appropriately sized vessel to go with the steam wand would be an obvious way to side-step this issue, but it remains a step not taken.

This situation is worsened by the fact that operating the steam wand is a multi-step process. First, you have to grapple with getting the cup to fit underneath the wand itself. Then, you have to swap the machine into the milk frothing setting. Next, you have to operate a separate lever to control the output on the wand before (finally!) going about the hands-on process of foaming the milk itself.

Even if the inclusion of a steam wand on the De'Longhi Dedica Arte does add value, the exact implementation here leaves sometimes to be desired.

Is the De'Longhi Dedica Arte worth buying? 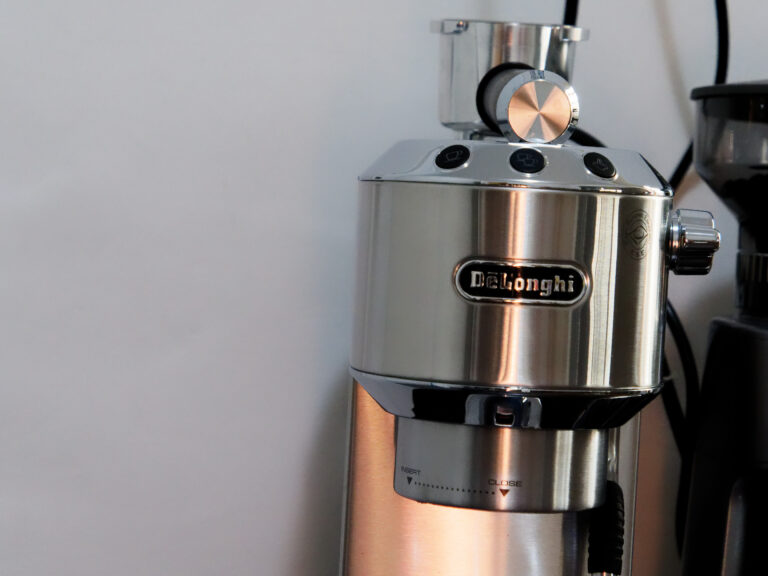 The De'Longhi Dedica Arte isn't content to be the perfect companion piece, but nor is it capable enough to cut it as a solo act. If you can find room for it within the ensemble of your kitchen tech, it's a capable contributor with clear-cut strengths. However, without a grinder to back it up, it's often defined by its weaknesses rather than its strengths.

The De'Longhi Dedica Arte blurs the line between convenience and constraint, and its particular flavor of ambiguity can be an acquired taste.

How does the De'Longhi Dedica Arte compare? 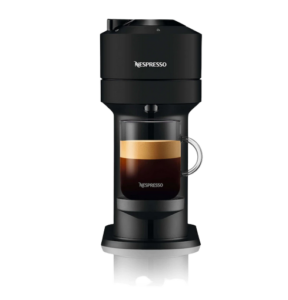 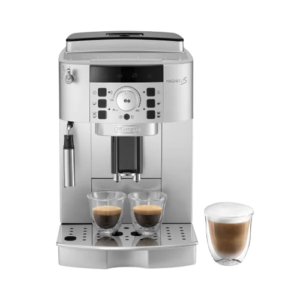 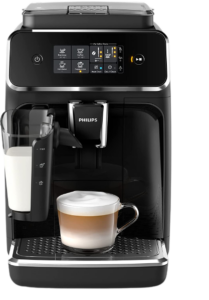 No. The De'Longhi Dedica Arte is designed for manual home espresso only. It will not work coffee pods.

The manual espresso pump in the De'Longhi Dedica Arte applies 15 bars of pressure.

No. You will have to pair it with a grinder or acquire pre-ground coffee beans to use it.