LG is ready to cut the cord, but are consumers?

Unveiled at this year's CES in Las Vegas, the LG Signature OLED M3 is a 4K TV with a 120Hz refresh rate and almost no cable management. At 97 inches, it's a veritable behemoth of a TV but the real appeal here is that it comes with the fact that LG is opting to outsource outsourcing media management to an external unit that comes bundled with the TV.

Rather than rely on the usual slew of HDMI and audio inputs on the back of the TV, media then gets beamed from this hub directly to the LG OLED M3. LG is billing this breakthrough as a "Zero Connect" solution, presumably as a cheeky nod to Samsung's own One Connect cable and box.

Of course, the caveat is that there is still one wire in the mix in the form of the power cable. This detail means that LG's OLED M3 is technically all that different from Samsung's One Connect Box. Both TVs still rely on a cable. LG's approach just uses it exclusively for power.

There are also the many cables consumers will be connecting to the Zero Connect hub. The companion piece comes with a trio of HDMI inputs, plus a pair of USB ports and a single slot for an antenna. There's also a rotating element on top of the unit that you can point at your TV for the best signal and voice controls, though it's not quite clear how extensive these will go.

The other big question mark here is the latency involved. It's very easy to imagine a wire-free setup like this one inviting all sorts of issues when it comes to audio and input lag, especially when it comes to gaming. We'll have to wait and see.

Still, in the meantime, the LG Signature OLED M3 is a novel addition to LG's high-end lineup of 4K TVs. It's not quite as eye-catching as the rollable LG OLED R, but it's probably going to end up being a little more affordable.

Exact Australian pricing and availability for the LG OLED M3 4K TV are to be confirmed. 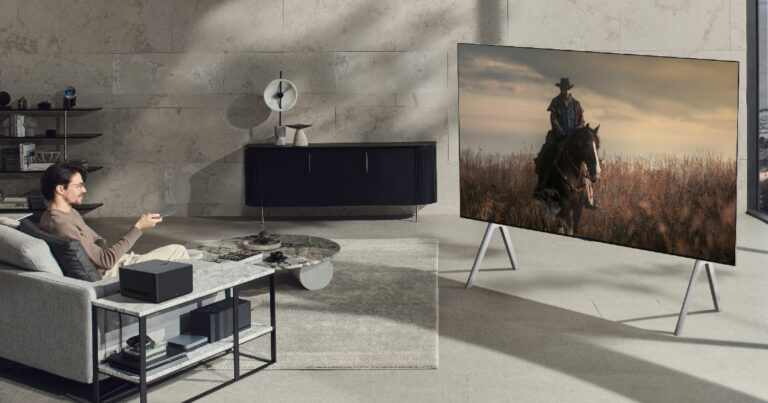 Aside from LG's attempt to one-up Samsung's One Connect setup, this year has been a relatively quiet one when it comes to the biggest brands in the TV space. Sure, Hisense did a song-and-dance about the 10th anniversary of ULED and Samsung inched ever closer to a world where MicroLED TVs are mainstream.

However, for the most part, the future of television on display at this year's biggest consumer electronics tradeshow looks a lot like the past and specifically the last few years. New technologies like Mini-LED are becoming less exceptional and more every day, but few innovations have stepped up to fill that void. The fact that Sony didn't even bring any TVs to show off this time around probably says something about where things are at.

LG's latest addition to the Signature OLED lineup gets rid of the wires, but it can't hide the fact that the best and brightest TVs of 2023 may have little to offer beyond new processors and smarter algorithms.