LG’s new 2-in-1 laptop is light but heavy

LG are still making lighter laptops, this one's just a little bigger than the last.

LG's latest addition to its Gram laptop lineup promises to make good on the ambitions of mobile multitaskers.

Available in Australia as of this month, the new LG Gram 2-in-1 16 comes kitted out with a 16-inch WUXGA resolution display, superior stylus integration and the latest in Intel Core processors. Depending on the model, the laptop also comes armed with as much as 32GB of dual-channel LPDDR5 memory and 1TB of M.2 NVMe SSD storage.

Creatives are the core constituency here, with the display on the 16-inch LG Gram offering up more than just higher resolutions and a wider 16:10 aspect ratio. The 2-in-1 laptop PC pairs up the baseline versatility of its form-factor with support for 99% DCI-P3 color accuracy, enhanced functionality with the LG Stylus Pen, and a set of  Thunderbolt 4-grade USB-C ports.

Design-wise, the new LG Gram 2-in-1 16 isn't hugely divergent from the 2021 model. However, there's a slew of new features designed to attract the privacy conscious this time around. These range from standardised tech like support for Windows Hello facial recognition to the less generic LG Glance. The latter not only automatically locks your laptop if you step away from it but goes one step further by blurring the screen to onlookers whenever it detects you aren't looking at it.

While the LG Gram 2-in-1 16 offers up a bigger canvas than its siblings, portability remains key quality. Despite the larger display and an 80Whr battery, the laptop weighs just 1.4kg. It's not that hard to find a 16-inch laptop with comparable specs, but finding one this light is a little harder. For instance, the ASUS VivoBook Pro 16X OLED weighs 1.95kg. 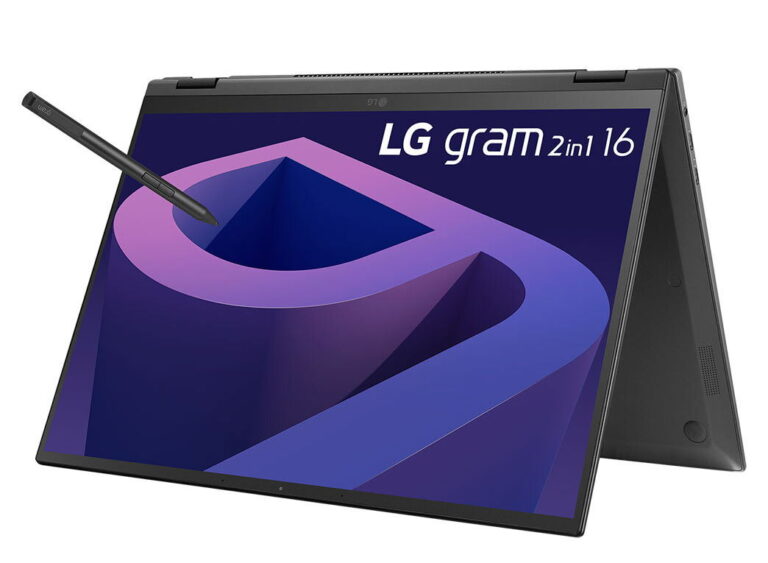 “The new LG gram 2-in-1 laptops are designed for users who are on-the-go and often find themselves multitasking,” said Brad Reed, head of B2B marketing at LG Electronics Australia.

How much does the LG Gram 2-in-1 cost in Australia?

In Australia, the LG Gram 16-inch 2-in-1 laptop starts at an RRP of $2,899. Exact pricing will vary from retailer to retailer and depend on the exact processor, RAM and storage configuration on offer.

There's also a more expensive model, priced at an RRP of $3,399, which ups the ante by adding an Intel Core i7 processor into the mix.