Apple’s cheap iPhone SE gets 5G and a better processor

Apple is looking to bolster the appeal of their affordable iPhone SE with better battery life, faster processing speeds and 5G connectivity.

Apple have announced a new iPhone SE, which promises to bring 5G connectivity alongside performance gains in key areas where the previous model lagged behind.

Even if the new iPhone SE doesn't depart from the old-on-the-outside, new-on-the-inside approach seen in previous models, the specific improvements that Apple are promising to make it an even more compelling on-ramp into the iOS ecosystem.

The third-generation iPhone SE is built around a 4.7-inch HD Retina display and a form-factor that's immediately akin to the iPhone 8.

Under the hood however, the new device comes armed by the same A15 Bionic processor found in last year's iPhone 13 and iPhone 13 Pro. That spec alone means that, on most fronts, the cheapest iPhone should be able to compete with the most expensive of Android devices when it comes to performance.

5G connectivity aside, you're looking at all the same perks that Apple smuggled into the mid-tier of the market last time around. The new iPhone SE features IP67 water resistance, support for wireless and fast-charging via Lightning cable, and a Touch ID fingerprint sensor that's integrated with the device's home button. 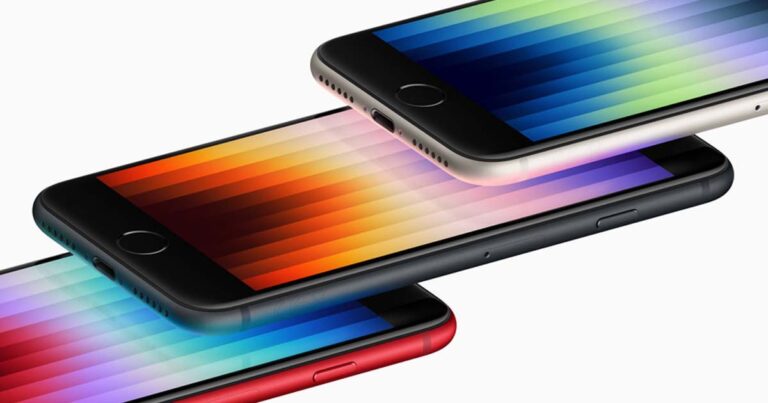 In addition to the obvious speed-up that comes with the new processor, Apple also claimed that the new iPhone SE will offer better battery life than its predecessor through a combination of superior power efficiency, smoother integration with iOS, and a set of undisclosed internal design changes.

It's a similar story when it comes to the camera on the device. Like version off the iPhone SE released in 2020, the new iPhone SE has a single-lens 12-megapixel camera on the back and a 7-megapixel one on the front.

While those hardware specs do put it at a significant disadvantage, Apple say that the A15 Bionic processor in the new device allows it to inherit more of the iPhone 13's camera magic than its predecessor than ever before. To that end, the new device supports the same Deep Fusion and Smart HDR 4 image processing tech that helps augment the photography capabilities of Apple's flagship iPhone.

This year we’ve built the most powerful and durable iPhone SE yet, with better battery life thanks to A15 Bionic, the same chip as our iPhone 13 line-up that also unlocks advanced camera features like Smart HDR 4, Photographic Styles and Deep Fusion,” said Kaiann Drance, Apple’s vice president of Worldwide iPhone Product Marketing.

The new version of the company's most affordable iOS-based smartphone will replace the second-generation model released in 2020.

In Australia, pricing for the third generation iPhone SE is pretty similar to that of the second-generation incarnation of Apple’s most affordable iPhone.

Prices start slightly higher at $719 for 64GB of on-board storage, but they cap out at $969 (rather than $999) for the 256GB model. Those looking for a more middle-of-the-road option can also consider the version of the new iPhone SE with 128GB of storage, which is priced at $799.

Preorders for the new iPhone SE are slated to start on the 12th of March, with the device launching locally on March 18, 2022.