Whether you love him or hate him, Elon Musk sure puts his money where his mouth is. It’s a big mouth, but then again, he’s got a lot of money.

After successfully burrowing underneath Los Angeles and Las Vegas with his Boring Company’s high-speed tunnels, Musk’s extra-terrestrial venture, SpaceX, set its sights on a satellite internet solution known as Starlink. The goal? Provide satellite internet access to the entire world with thousands of small satellites in Earth’s orbit.

Understandably, many Australians are excited about the prospect of having a more reliable satellite internet solution than what the NBN's Sky Muster system currently offers but it’s still early days for Starlink in Australia and its footprint is quite small.

Still, if all goes to plan, there’s a bright future for regional Australians outside of the fixed-line NBN footprint. In the meantime, here's what to expect from Starlink in Australia and when you can expect it to be available in your area.

Not eligible for Starlink? 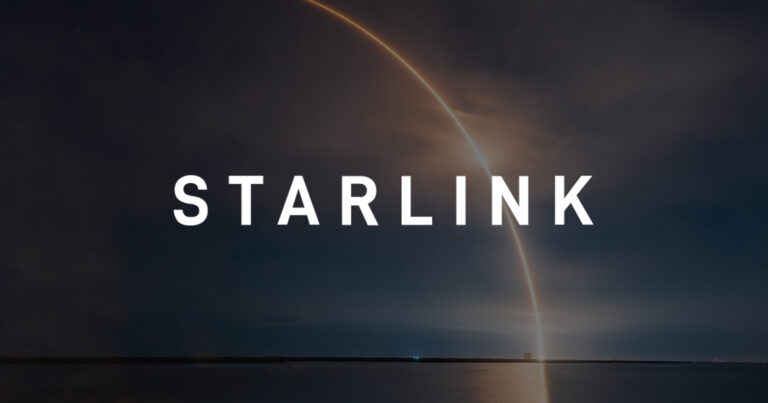 While Starlink is a very different type of satellite and internet connection to NBN’s Sky Muster, the broad principle is generally the same. Starlink satellites in orbit communicate with transceivers on the ground and deliver a wireless signal to a terminal in your home (which plays the same role as a roof-mounted NBN dish).

Australians who rely on satellite internet are particularly excited for Starlink’s rollout because it offers unlimited data and has the potential for much faster speeds than Satellite NBN.

Is Starlink better than NBN?

If the early reports are any indication of the final product, Starlink in Australia is better than the NBN’s Sky Muster satellite in just about every way. It is more expensive, however.

Plans sold on NBN Sky Muster only advertise speeds of 25Mbps. They do have the potential to boost higher than that but it’s subject to network capacity. On the other hand, Starlink's advertised speeds range between 20Mbps and 100Mbps.

Then there are the data limitations. Unlike fixed-line NBN, where almost every provider and plan has shifted to unlimited data quotas, most satellite NBN providers offer peak (7 am to 1 am) and off-peak data limits. More data is typically allocated in off-peak times to reduce the amount of congestion on the network during peak hours.

In comparison, Starlink offers one simple plan at $139 per month. You do however have to pay $924 in hardware fees, and $115 in shipping and handling. Sky Muster NBN hardware and installation is free.

At present, Starlink is offering a discounted hardware fee of $450 with free shipping. This deal lasts until the end of the year.

While Starlink can cost a little more than Satellite NBN at a baseline, the unlimited data and speeds involved may mean you’re getting more bang for your buck.

It’s been a bit of a raw deal for rural Australians who need to rely on satellite NBN to run a business for some time now, so it's no surprise that many people are itching are eagerly awaiting the opportunity to take Starlink for a whirl.

If you're stuck on satellite NBN in the meantime, it's worth revisiting your bill and comparing it against the latest plans and deals. Below are the most popular satellite NBN plans available this week.

When can I get Starlink in Australia?

Starlink is now available to deliver service Australia-wide. Anyone, anywhere in Australia can now order a Starlink plan.

Starlink was initially only able to deliver internet to "low and remote density areas", but can now also sell plans to people living in cities.

You could, theoretically, order a Starlink plan in inner-city Sydney. Musk has however previously said that Starlink will work best in low-population-density situations. 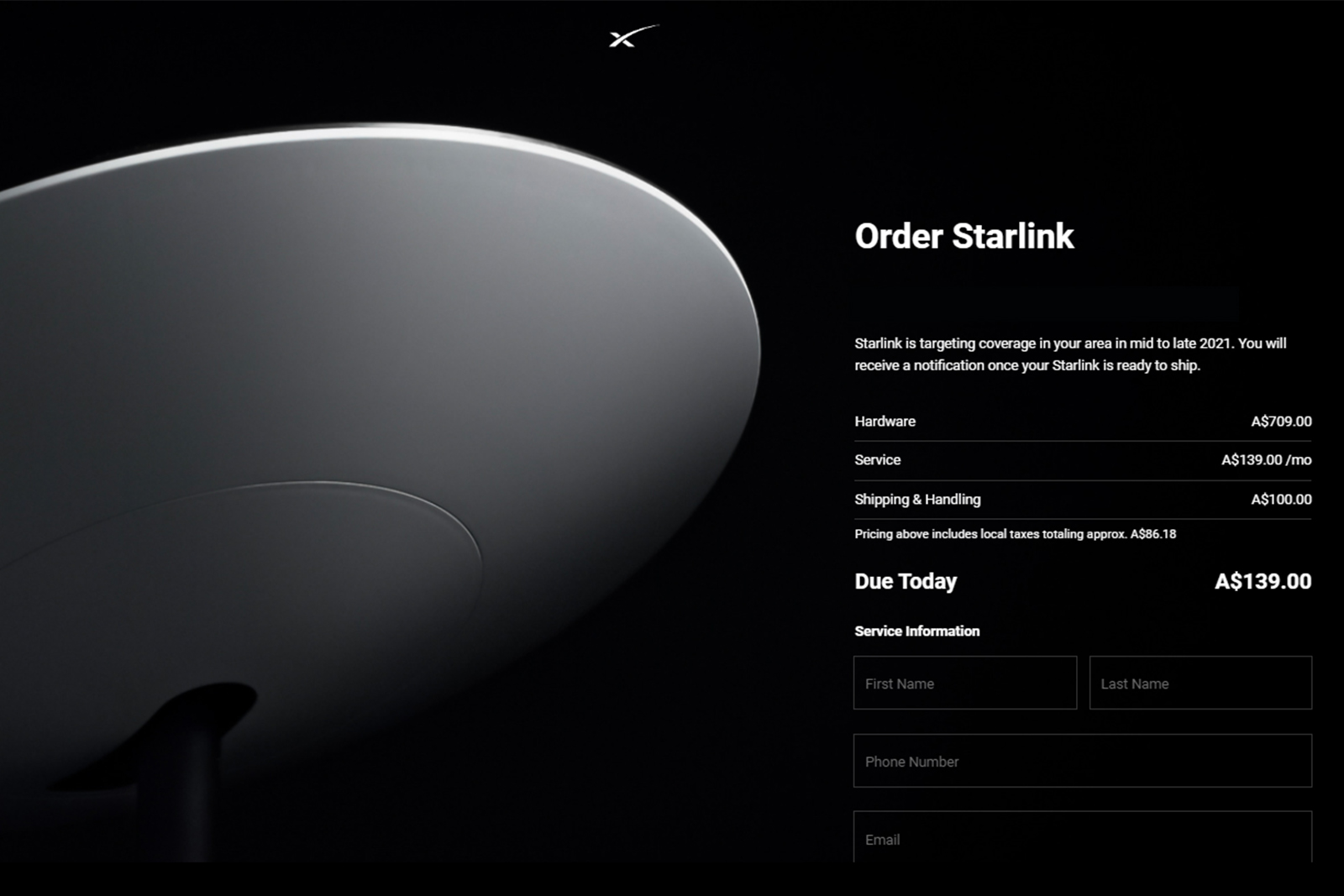 While you won't pay an installation fee for Starlink, you'll need to pay $924 upfront in hardware costs and $115 in shipping fees.

This is currently discounted to $450 and shipping is free. This promo runs until the end of the year.

This gets you all the equipment you need to get started, including a satellite dish, mounting tripod designed for ground-level usage and a Wi-Fi router.

Although many Starlink customers set up their satellite dish at ground level using the aforementioned tripod, higher elevations tend to achieve better results and opt to use a roof-mounted rack instead.

This can add to the overall cost of setting up a Starlink connection, though the sum itself isn't particularly significant and usually less than $100 (plus the cost of labor, if you have to get a contractor involved).

You can check out Starlink's coverage in Australia via the official Starlink coverage map.

Starlink Australia price: How much does it cost?

Once you’re connected, you’ll also have to pay a $924 fee for the hardware plus a $115 shipping and handling fee. This is currently discounted to $450 and shipping is free. This promo runs until the end of the year. 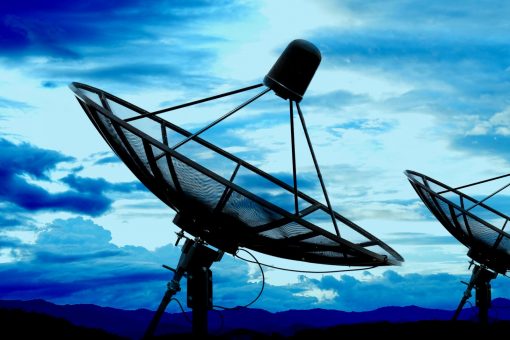 There are satellite internet plans that have a good mix of value and peak data.

Read our picks for the best satellite internet NBN plans

How fast is Starlink in Australia?

Starlink services had an average latency of 49ms, however.

How many Starlink satellites are there?

The third-party website satellitemap.space tracks the location and orbit of Starlink satellites (as well as ground transceiver locations). Below is a snapshot from the map but you can see the full interactive version here. 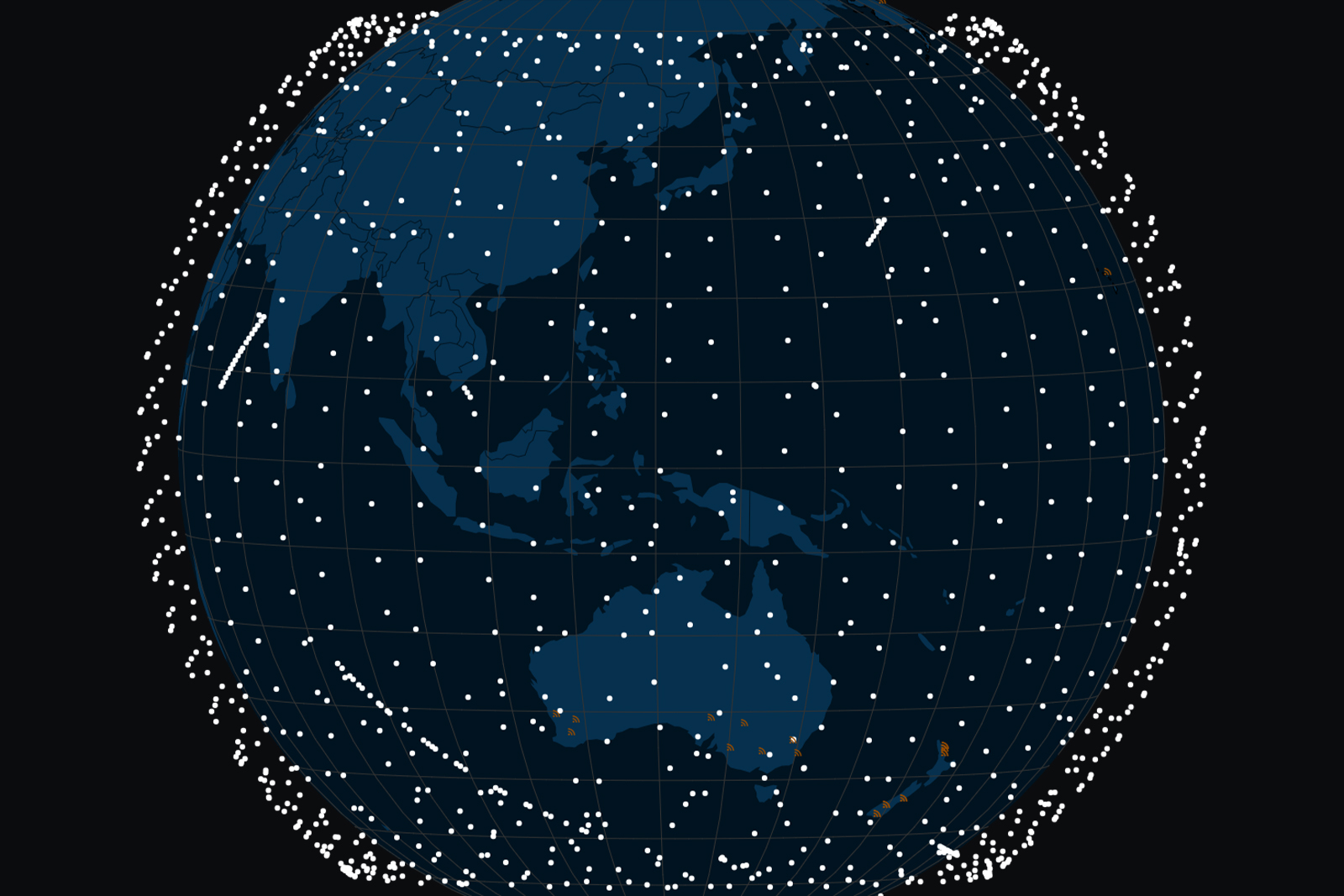 Starlink for Business in Australia

Starlink for Business is a more expensive alternative to a standard Starlink connection, designed for business use.

In addition to being faster, Starlink for Business is a lot more expensive. You're looking at $750 per month in service fees, $3,740 in hardware costs, and $155 in shipping.

Starlink for Business should be available in most places regular Starlink is.

Starlink is also available for RV owners without a fixed location. Pricing is a little more expensive than a standard service, billed at $174 per month. You should still get the same kind of speed as regular Starlink customer, but they may be reduced during peak hours.

Latency is much higher, however. The only guidance Starlink provides is a ping of under 99ms, which is potentially far slower than the 25ms to 50ms it quotes for its other service options.

While there is some Maritime Starlink coverage around Australia, the plans don't appear to be available to Australian customers yet.

Kitting out your boat with Starlink connectivity is a lot more expensive than any other plan. You're looking at USD$5,000 per month, and USD$10,000 in hardware costs.

While Starlink is competing against Satellite NBN connections for rural customers, those who aren't so remote might be able to get away with a 5G home internet connection as an alternative.

Like Starlink, 5G speeds vary based on your coverage. However, if you're in an area with good coverage, a typical 5G home internet plan will beat Starlink on both price potential and speeds.

For example, a Telstra 5G Home Internet plan offers average download speeds of around 378Mbps and upload speeds or 46Mbps. Even if Elon Musk's prediction that Starlink speeds will double in the near future proves accurate, 5G still beats it for speed at a lower monthly spend.

Check out the widget below for a round-up of popular 5G home internet plans.