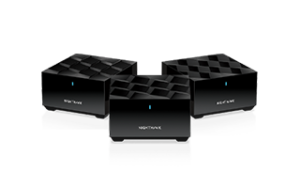 For many homes, the MK63 (one router, two satellites) variant of the Netgear Nighthawk Mesh WiFi 6 System will be overkill, with the MK62 (one router, one satellite) sufficient for turning in-home dead zones into connectivity hotspots. If you want to future-proof your home with a WiFi 6 mesh WiFi system and don’t balk at the asking price, this is a user-friendly networking solution that can keep up with your home as devices upgrade.

WiFi range extenders or boosters, depending on your preferred tech nomenclature, used to be one of the best ways to address slow WiFi speeds around the home. These days, though still a viable option, WiFi range extenders and boosters have been replaced by WiFi mesh systems.

WiFi mesh systems range in price and features, and the Netgear Nighthawk Mesh WiFi 6 System is definitely on the pricier end of things (especially if you opt for the three-node MK63 model). Still, for larger homes or even smaller homes with thick walls (and other interference), the MK63 is a future-proofed mesh system that’s speedy enough to be a viable wire-free networking replacement. 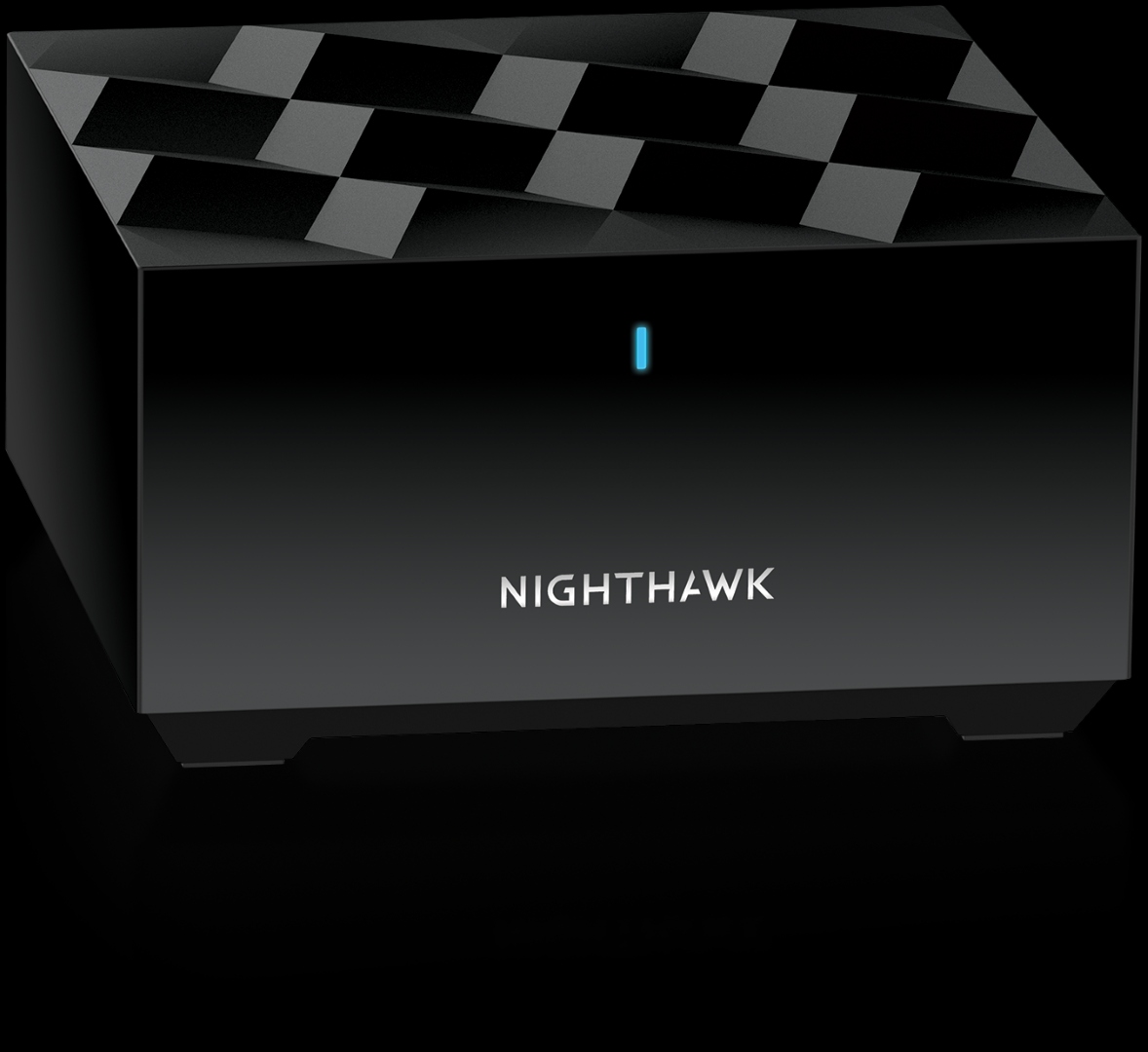 Inside the MK63 box you’ll find one Nighthawk Mesh WiFi 6 Router (MR60) and two Nighthawk Mesh WiFi 6 Satellites (MS60). Above those nodes is a quick-start guide, which basically tells you to use the Nighthawk smartphone app (download it before disconnecting your current networking equipment). Beneath the networking hardware you’ll find one two-metre flat Ethernet cable and three 12V/1.5A power adaptors. There’s no Netgear MK63 manual in the box, but you can find a digital version here. 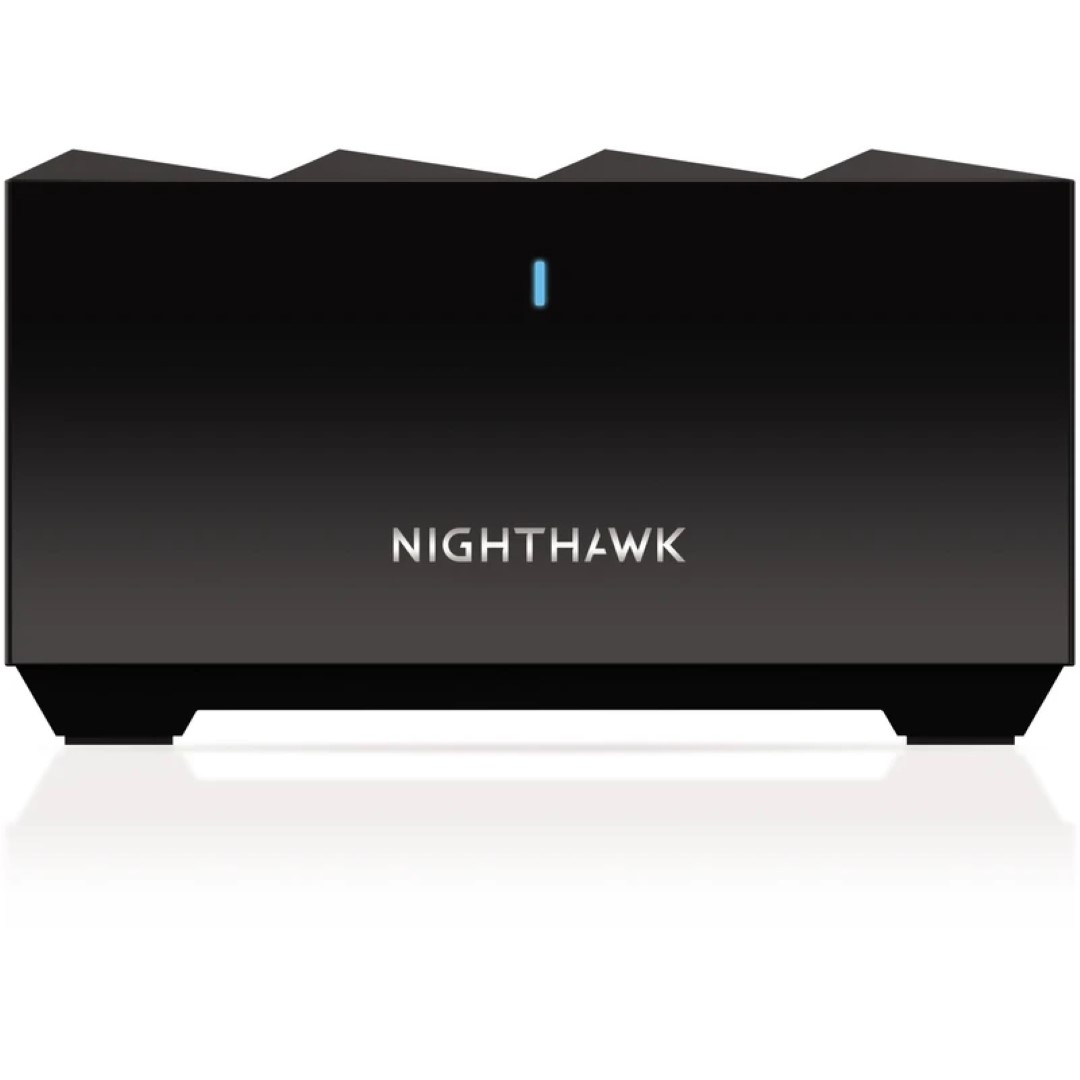 The Netgear Nighthawk Mesh WiFi 6 System is sold as a whole-home WiFi 6 mesh network, designed to offer a mix of great range (up to 420 square metres) and the latest WiFi 6 standard. Dual-band wireless technology automatically shifts connected devices between 5GHz bands (faster, shorter-range) and 2.4GHz (not as fast, longer-range) as you move around the home. It is, of course, backwards compatible with earlier WiFi standards, expandable as mesh systems tend to be, and it offers some decent security features.

While other mesh systems are finicky on initial setup, the biggest out-of-the-box challenge for the MK63 is separating router from satellites. The catch is they look identical, except for two Ethernet ports on the back of the router and one apiece for the satellites. Underneath, you can also see that they’re designated as either ‘router’ or ‘satellite’ on the sticker.

The Netgear Nighthawk App walks you through the essential setup steps, first with the router, then with the satellites, the latter of which is a surprisingly optional step found in the app menu. These steps start as they always do: power cycle your modem. The router is then connected to the modem via provided Ethernet cable, then the power cable for the router. A QR code beneath the router means you don’t even have to punch in WiFi details as the rest of the configuration steps take care of itself after you’re promoted to scan. A firmware update may be required, but that’s automated and painless.

For the satellites, place them within range of the router. In my tests, they can be placed, configured, and offer great speeds (more on this below) through thick concrete walls: a single wall for one satellite, and multiple walls for the second. Connect the satellites to power then, once the blue light comes on, press the ‘Sync’ button on the back for them to connect to the router. It took about a minute after the light turned blue again for the satellites to be detected in the Nighthawk App. All in all, this guided process should take around 15 minutes to complete.

The wireless speeds of tomorrow, today. 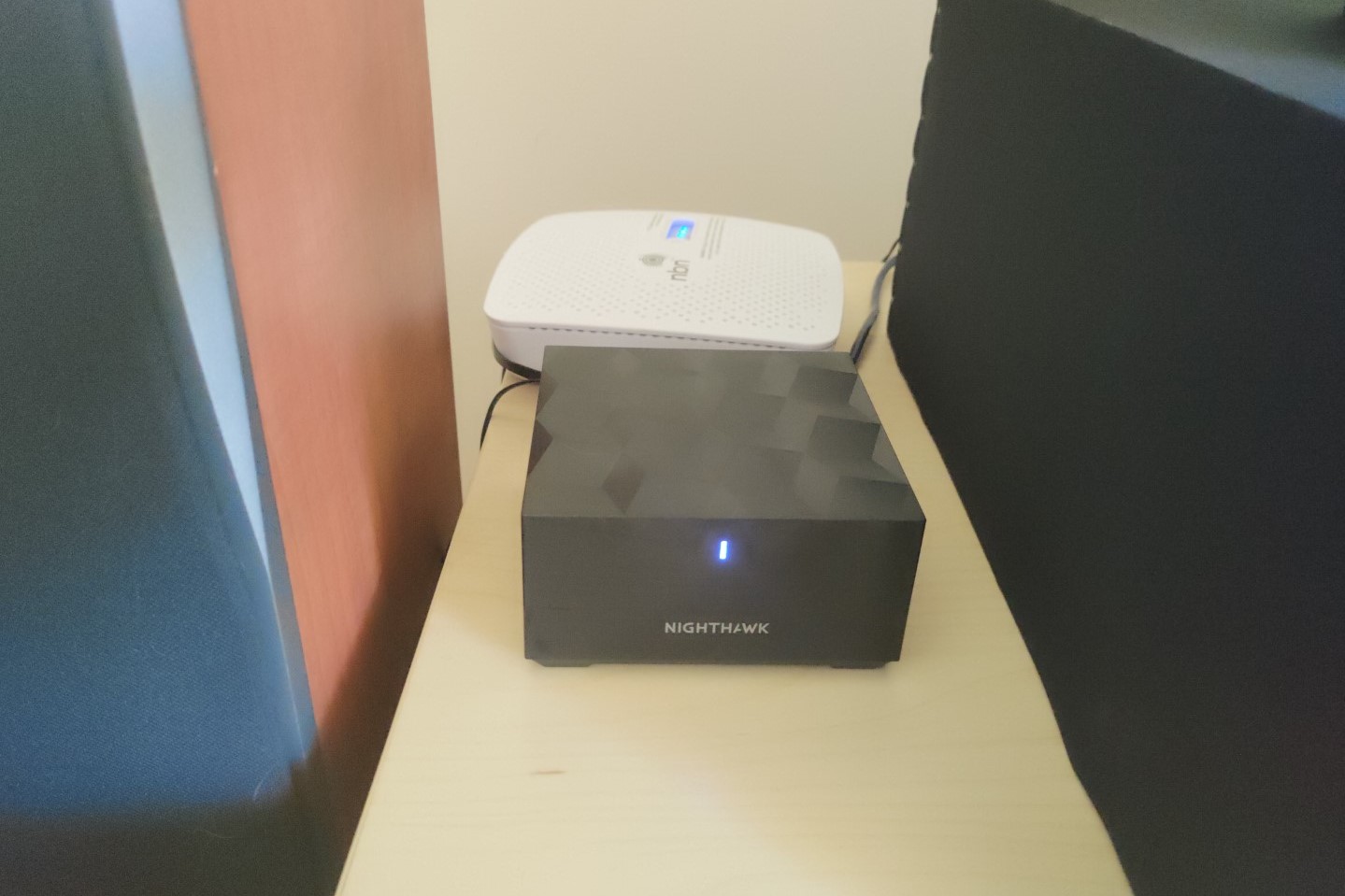 This mesh WiFi system is fast. Like, Ethernet fast. While I’m admittedly testing in a two-bedroom apartment and not the kind of multi-storey mansion for which this is intended, the Nighthawk Mesh WiFi 6 Router is incredibly speedy even without the satellites. With my Fibre-to-the-Curb NBN 100/40 connection, I was registering above-spec 102Mbps download speeds, very respectable 37Mbps upload speeds, and fantastic 1ms latency at the opposite end of the lounge from where the router is placed.

Still using the router without the satellites, I tested speeds of 103Mbps download, 37Mbps upload (closer to 38Mbps), and 3ms latency in the main bedroom, which is through a thick wall. The spare bedroom, which is behind multiple thick walls, wasn’t as flash, but still had comparatively impressive results compared to other routers that struggle to get a signal to that room: 85Mbps download, 29Mbps upload, and 21ms latency.

With one Nighthawk Mesh WiFi 6 Satellite in the main bedroom, lounge and bedroom speeds were the same, but the problematic spare room had bolstered speeds of 102Mbps download, 37Mbps upload, and 5ms latency. Adding the second satellite had no noticeable impact on speeds, but that’s because my apartment isn’t big enough to fully test the MK63 at its limits. Also, NBN100 internet isn’t fast enough to see the kind of online speed gains that would be likely measurable in NBN 250 and NBN 1000 connections when replacing older networking hardware.

What I can say is that those results – the router-and-one-satellite combination specifically – are just as good as Ethernet connections to devices in these rooms, which is normally how I deal with the thick interfering walls in my home.

One or two satellites for smaller or larger homes.

This is really a question of how large your home is or how many potentially interfering factors you have in the home that can lead to dead zones the farther out you are from the router. Either way, purchasing the Netgear Nighthawk MK62 or MK63 will net you a Nighthawk Mesh WiFi 6 Router and either one (MK62) or two (MK63) Nighthawk Mesh WiFi 6 Satellites.

While I was able to (accidentally) use one of the satellites as a router in my tests (for one device only), it’s unclear whether an additional Nighthawk Mesh WiFi 6 Router can be used as a satellite. This is important because the standalone MS60 satellites don’t appear to be readily available in Australia and aren’t particularly cost-effective to import. That means, currently, if you did need to expand this mesh WiFi system with additional satellites, you have to purchase the MK62 two-pack or MK63 three-pack, which makes for a pricy network upgrade.

The Netgear Nighthawk App is incredibly user-friendly and has some great monitoring features. The home screen gives you at-a-glance info on your internet status and how many satellites are online. Tapping on ‘Devices’ shows the names of the devices currently connected, separated by 2.4GHz and 5GHz networks, and lets you toggle the internet connection between ‘Pause’ and ‘Resume’. This is about as deep as the parental controls reach, though, and you’ll need to know the name of the device to ensure you don’t accidentally pause the wrong connection.

Netgear Armor is also here, but it’s a trial only and is an ongoing subscription service if you want the admittedly renowned network-level device protection. ‘Internet Speed’ is an in-app equivalent of visiting the popular Speed Test website, while ‘WiFi’ analytics offer surprisingly in-depth network data, even if the channel recommendations paradoxically don’t let you switch to the better-rated options.

Is the Netgear Nighthawk Mesh WiFi 6 System worth the price ($649RRP)?

That $649 is a lot of money to spend on a mesh WiFi system that doesn’t have tri-channel support. That third channel tends to be used as dedicated backhaul to keep the mesh WiFi system reliably communicating at all times. The MK62 and MK63 do have the option for dedicated Ethernet backhaul, but with only one Ethernet port per satellite, you can only have wired backhaul link between router and satellite on the MK63, unless you connect the system to a networking switch.

If this backhaul oversight isn’t an issue for your home, the Netgear Nighthawk Mesh WiFi 6 System is a future-proofed and speedy operator that annihilated dead zones in my apartment tests and offered reliable connectivity and fast speeds throughout. Smaller homes can save money with the two-node MK62 configuration, while the three-node MK63 setup is best reserved for larger abodes.