Mesh WiFi systems are a great way for simplified whole-home WiFi, and the results may put certain routers to task. 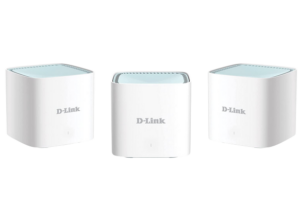 The D-Link M15 Eagle Pro AI WiFi mesh system may not look like it can compete with the larger, external antennas of a router, but it surprised me with its performance (including with just the M15 router).

That compact design makes placement a cinch, even if the cables feel too short. It’s great to see cross-product extender potential, too. I just wish the setup was more straightforward for everyday users—something mesh is supposed to shine at—and it was confusing to see the speeds dip after a firmware update.

The D-Link M15 Eagle Pro AI WiFi mesh system may have a mouthful of a name and some perplexingly complex setup oddities, but it’s got plenty of performance in a small package. Whether you buy the two-pack, three-pack or opt to use a single satellite, the D-Link M15 pumps out surprising speeds. 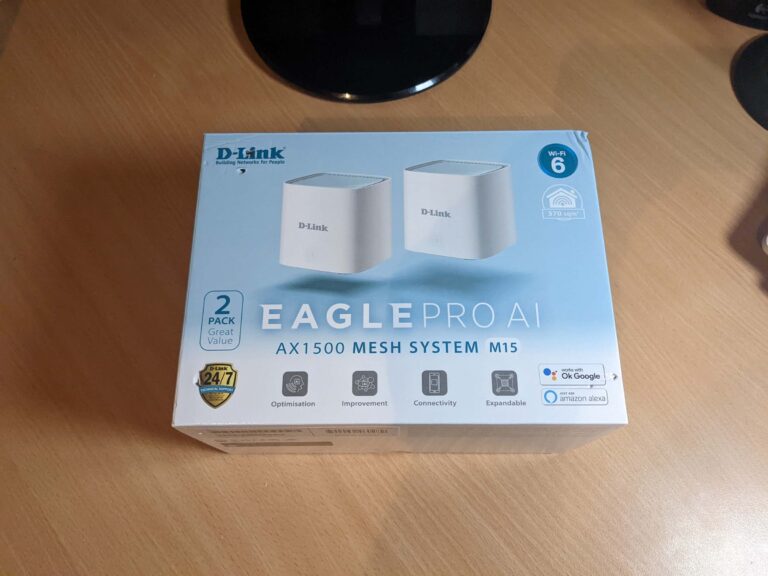 When you start looking at a mesh WiFi system over a traditional router, prices start at around the $200 mark.

In terms of RRP, you’re looking at $279 for the two-pack D-Link M15 Eagle Pro AI WiFi mesh system and $379 for the three-pack upgrade. The two-pack option is about right given the competition, but the three-pack puts the pricing around Google Nest and Eero 6 TrueMesh pricing.

Somewhat painful to set up, despite being a mesh system 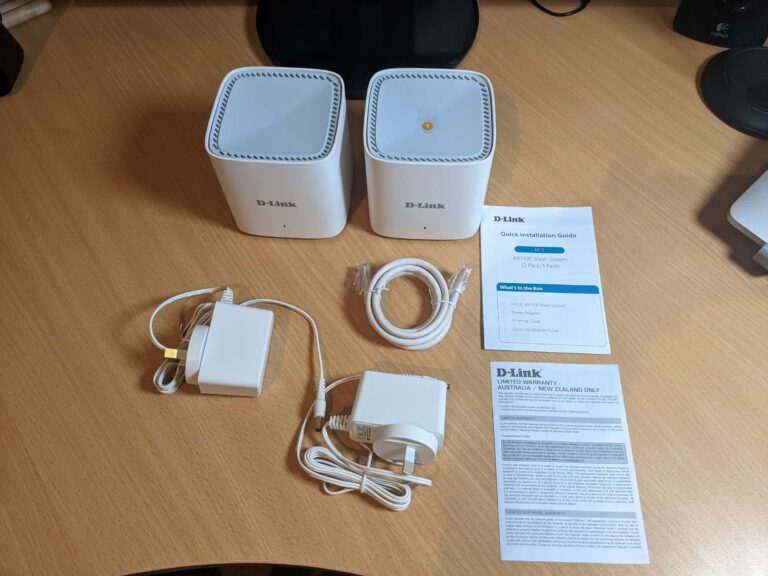 The main advantage to opting for a multi-satellite mesh WiFi system over a single router is coverage and elimination of WiFi blackspots. The other edge is an incredibly user-friendly setup. While the D-Link M15 mesh system achieves the former, the latter is lacking.

During my research, all of the low-score user reviews for the D-Link M15 talked about difficulties with setup. Similar to the D-Link R15 router, I had issues setting up the D-Link M15 that didn’t make a lot of sense. Initially, it’s great to see the option to create a new network or extend an existing one, the latter of which is reliant on compatible D-Link products.

Unlike the D-Link R15, the D-Link M15 has a device QR code on the quick-installation guide, meaning you don’t need to flip over networking devices after plugging them in. The first challenge, though, is both M15 devices (router and satellite) are identical, with the only difference being an easy-to-remove sticker on one identifying it as the router.

If the sticker is removed or falls off, it’s a gamble as to which identical device is the router. Things went smoothly enough for the initial configuration steps until the Eagle Pro AI app incorrectly identified my Superloop connection as PPPoE (needing a username and password) instead of IPoE (no credentials required). Once past this hurdle, the D-Link app also said it couldn’t find the M15 satellite, despite me following the provided steps.

Later, the D-Link app installer got stuck and asked me to connect to a WiFi network that didn’t exist. Strangely, the network was already configured and it was only the Eagle Pro AI app that hadn’t realised that the internet was working.

D-Link is a hardware manufacturer that’s been around for more than 30 years. In terms of consumer technology, D-Link made a name for itself selling home network equipment, including routers, WiFi extenders and mesh WiFi systems. D-Link also sells cameras and smart home gear.

Solid performance with one or more satellites 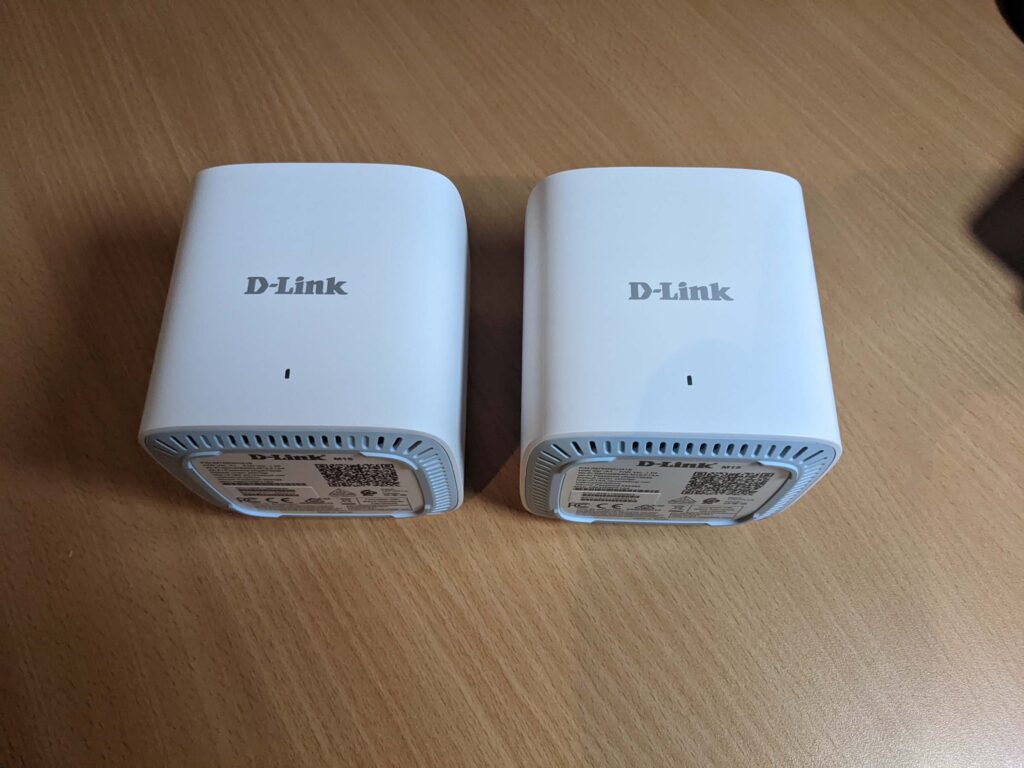 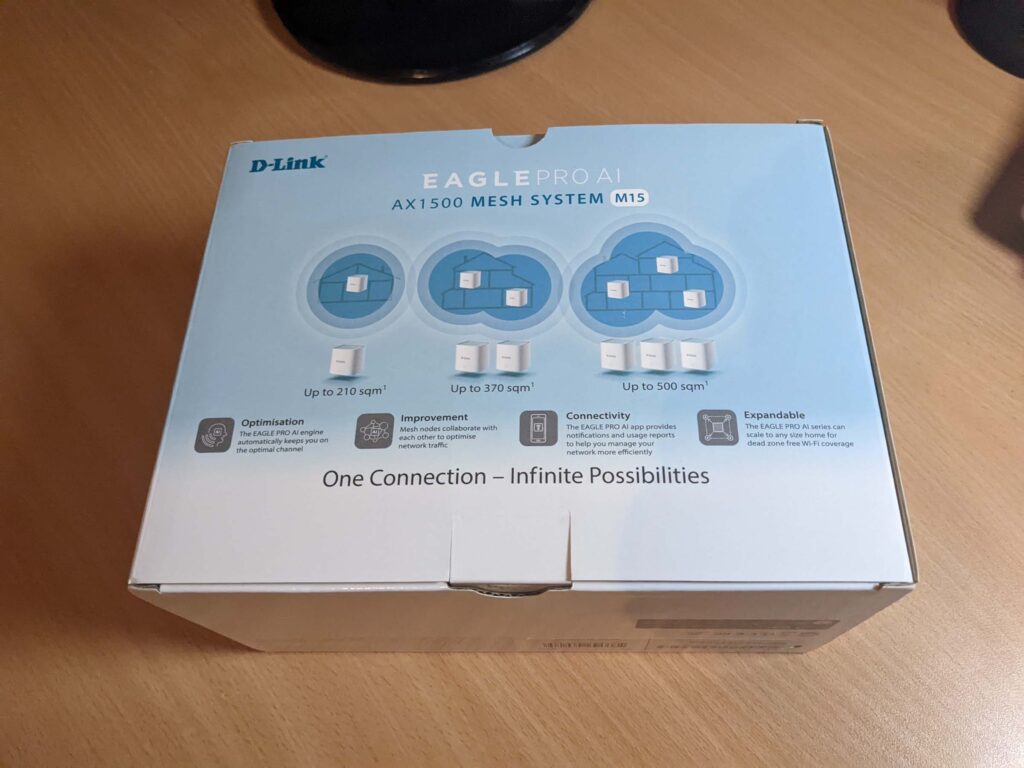 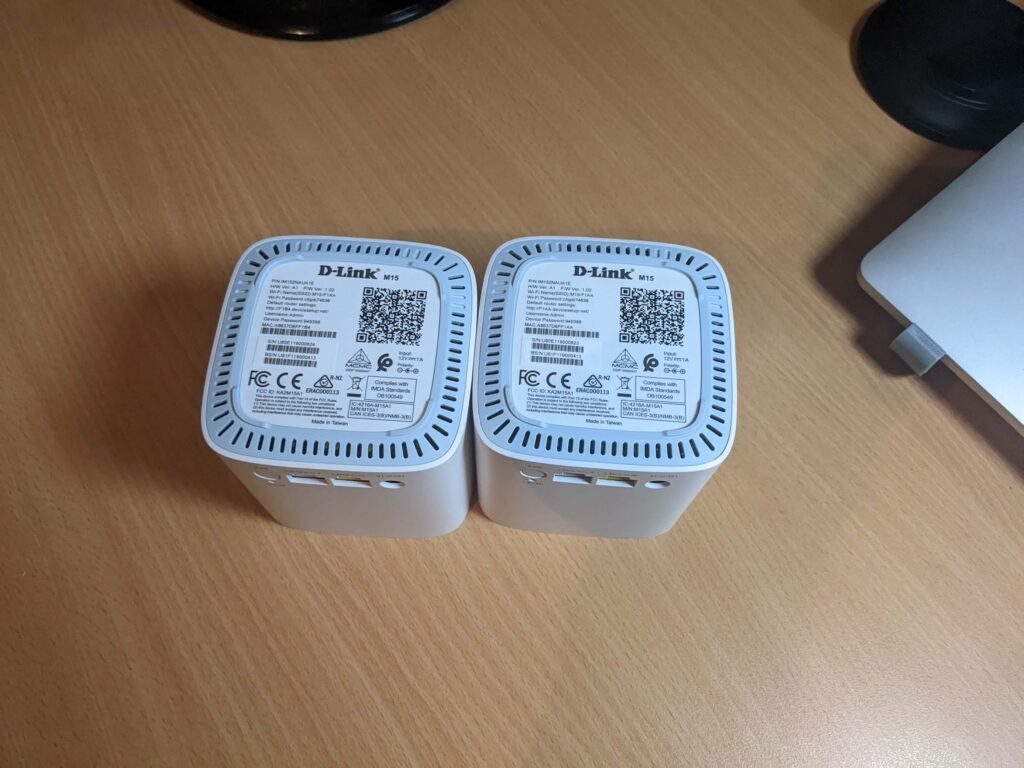 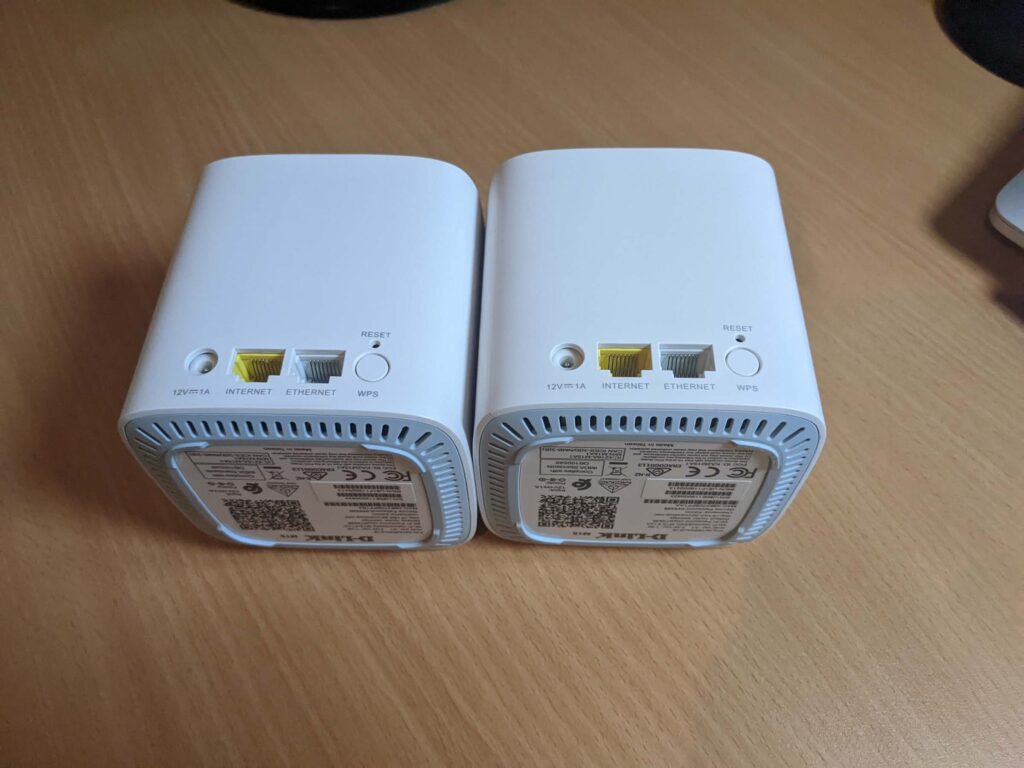 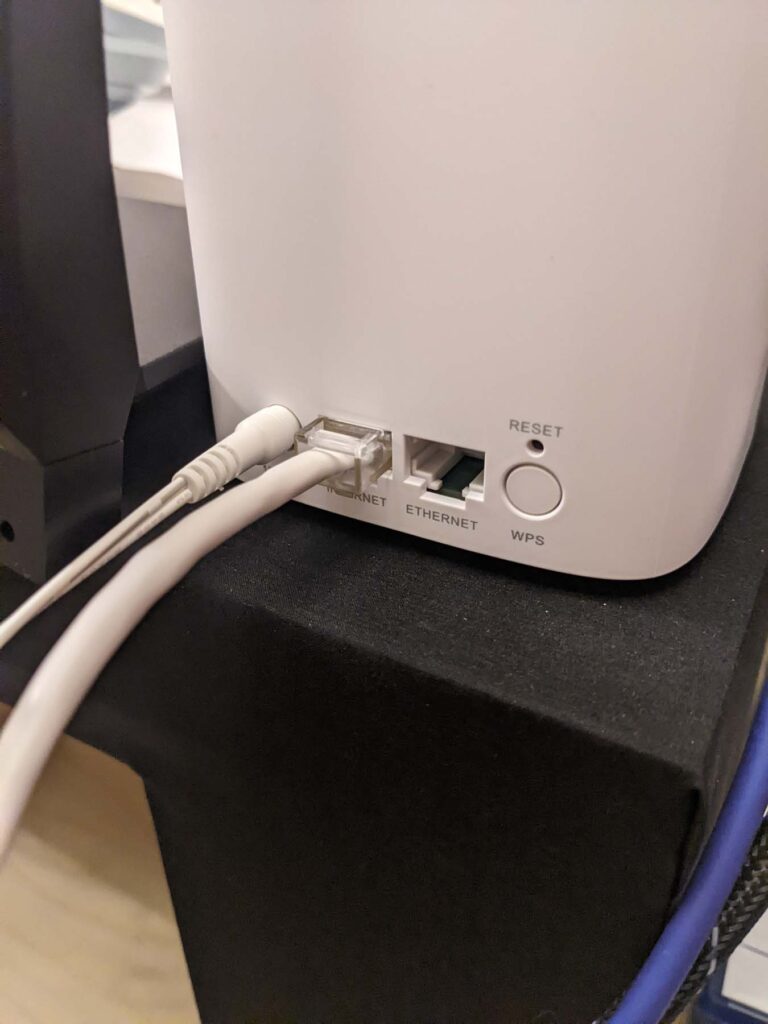 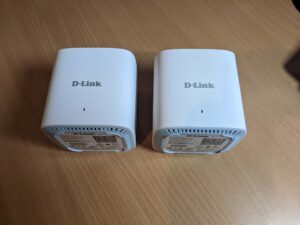 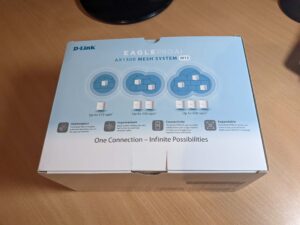 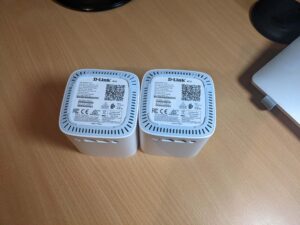 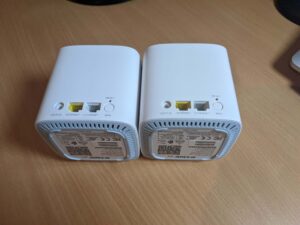 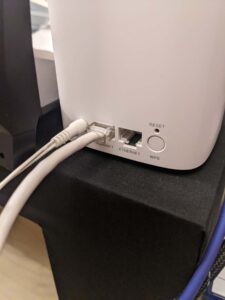 D-Link sent me a two-pack version of the M15 to test, and I was curious to see what performance I could get out of a single device before using the combination of M15 router and satellite. Like all good mesh things, once it’s up and running, the M15 is built to set and forget.

Instead of dual WiFi networks, the M15 combines the 2.4GHz and 5GHz channels into a single network that intelligently shifts between the two as devices move in and out of range of the faster albeit shorter-range 5GHz channel.

All of my D-Link M15 tests were conducted on a Superloop NBN 100/40 Fibre-to-the-Curb (FTTC) connection during the busy evening hours. Note that the best results are those that maintain the fastest download and upload speeds when changing rooms, while lower numbers for parenthesised speeds and latency are best.

Here’s how the D-Link M15 performed just as a router, both after and before a firmware update.

And here’s how the D-Link M15 performed with router and satellite (the satellite was placed about five metres away, which the D-Link app detected as a good mix of range and performance).

For comparison, here’s a look at D-Link R15 router results from the same night.

Before the router update, using just the D-Link M15 router scored better speeds for the most part and with more consistent latency. There does appear to be a bigger boost in closer range 5GHz performance for download speeds, though. Latency noticeably went up when wirelessly connecting the M15 satellite to extend the network, but speeds did improve at range for the most part as you’d expect.

Speaking of latency, it was surprising to see the D-Link M15 router beat the R15 router with better latency for most tests, something that dedicated routers tend to be better at. Some of the bigger speed drops using a single M15 unit are fixed by adding another one (as you’d expect), but the trade-off is latency even when the second M15 unit is only about five metres away from the main one. 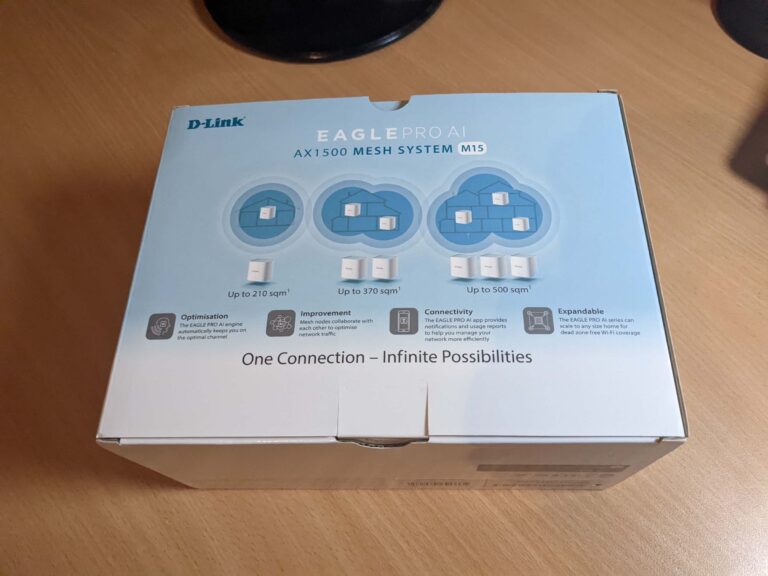 The main benefit of the D-Link M15 Eagle Pro AI WiFi mesh system is how expandable it is. If you have a larger house, it’s worth buying the three-pack for coverage. That said, if you don’t mind buying multiple products, the D-Link R15 router is built to expand, either via another R15 router or with M15 satellites.

This way, you get the perks of a router—most notably more Ethernet ports instead of the one-per satellite of the M15—and the expanded coverage of mesh WiFi. Note that those single Ethernet ports will offer a single device a more stable connection to a satellite, but speeds are dependent on the WiFi signal between M15 router and M15 satellite. Alternatively, you can use the Ethernet port for backhaul to the M15 router, which will make for faster overall speeds, but that’s an extra cable to run and negates the wireless perks of a mesh WiFi system (still, it’s a nice option to have).

It's good to see straightforward traffic prioritisation options at an app level, and adding an extra M15 satellite is as easy as following the in-app steps. There are limited parental controls, and you can add either Alexa or Google voice controls for basic functionality, but I honestly found it easier to tap a button or few on the user-friendly app.

Setup hiccups aside, the M15 has solid performance 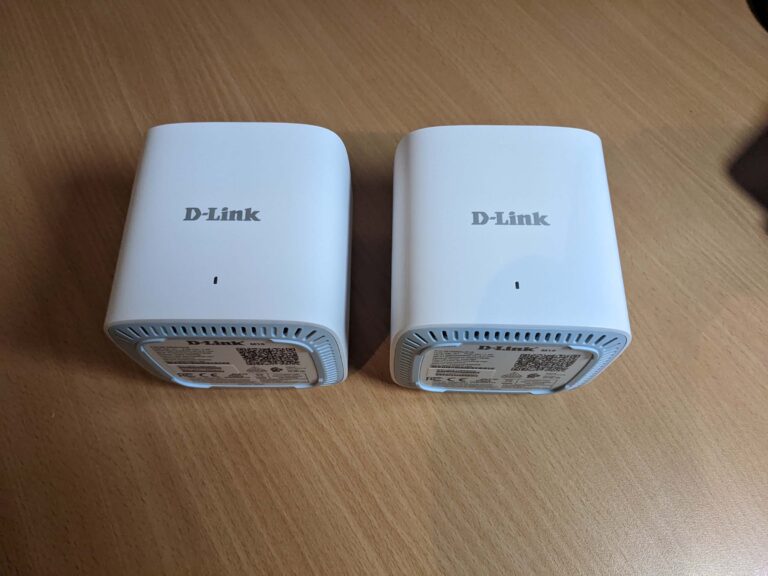 If you’re after a mesh WiFi system that has surprisingly robust performance for its compact size, the D-Link M15 WiFi mesh system is worth considering. If you get past the paradoxically complicated setup process—a misnomer for mesh systems—tweaking settings gets a whole lot easier.

How we review mesh WiFi systems

It’s good to see buying options—two-packs, three-packs and affordable satellite expansion—but it’s not essential. One of the first things we check is how easy it is to determine the mesh WiFi router from its satellites. There’s a trend for these devices to look identical, so some form of identification goes a long way to simplifying setup, especially for future-proofed convenience.

Speaking of setup, we favour brands that offer incredibly straightforward step-by-step configuration. After all, a mesh system is supposed to be set and forget. Then comes the testing. We start by testing the speeds of the mesh WiFi router, then expand it with whatever satellites are included. Great coverage is expected, but it’s less great if it comes at a big hit to latency and/or overall speed.

We like D-Link products when it comes to mesh, even if setup is sometimes unnecessarily complicated. When they’re up and running, D-Link mesh products tend to offer great coverage and good speeds.

The router has to support mesh expandability for it to work as a mesh WiFi system. For the D-Link M15, it’s compatible with products like the D-Link R15 router for this exact purpose.

We advise using at least two devices for D-Link mesh configuration: one to follow the app-guided steps and the other to see if the internet is live. During configuration of the D-Link M15 and R15, the app erroneously said there were setup issues when the WiFi internet was already up and running.