Even if it’s only just entered Early Access, there’s more than enough to chew on in Spice Wars for both Dune fans and newcomers alike. 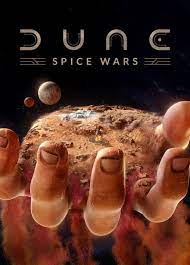 Even if it’s only just entered Early Access, there’s more than enough to chew on in Spice Wars for both Dune fans and newcomers alike.

As someone who started getting into board games around the same time they stopped making real time strategy ones, Dune: Spice Wars feels like a little bit of both.

Developed by Shiro Games and published by Funcom, Spice Wars is a refreshing riff on a classic formula. The game leans into the best aspects of the source material, elegantly blends the long-term depth of 4X strategy games like Sid Mier’s Civilization with the satisfying immediacy of something like Starcraft.

All good board games begin with the set up. Each time you start a new game of Spice Wars, you’ll get a randomly generated (albeit tile-based) version of Arrakis and given a choice of four major factions to play as. Shiro Games say that (at the very least) a fifth faction will be coming later down the line, but right now the list includes House Atreides  (AKA “The Good Guys”), House Harkonnen (AKA “The Bad Guys”), The Smuggler (AKA “The Profiteers”) and The Fremen (AKA “The Locals”).

Each of these factions comes with unique military units, faction-specific abilities and a set of smaller perks that are tied to your faction’s advisors. The Fremen, Harkonnens, Smugglers and Attredies all have access to a total of four advisers. However, every game starts with you picking two of them. This empowers you to experiment with different builds and play styles within the scope of each faction. While the Smugglers might have a natural affinity for trade, the right adviser can make them a military powerhouse. 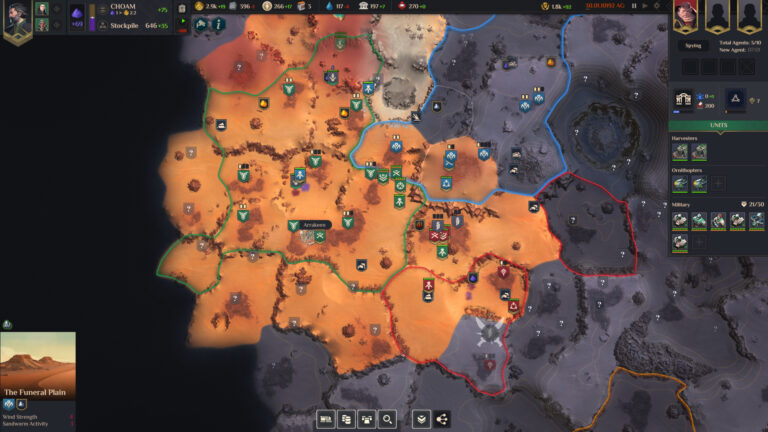 The second thing you need to cover with any good board game is the objective. What are you working towards? How can you get ahead of the competition, and how do you win?

In the case of Dune: Spice Wars, the goal here is to reach a “Hegemony” score of 25,000 before your rivals do. Hegemony points can be earned for pretty much anything, from harvesting spices to exploring the map, to paying your taxes on time to winning military encounters. You can even build structures that crank out nothing but the currency, pushing you closer and closer to victory with each passing day.

There are a few additional win conditions in the game, such as being elected governor or assassinating or defeating every other player on Arrakis, but these are typically more trouble than they’re worth. They’re more intended as tools that can be used to stop someone else from winning if you’re behind on victory points than as an alternative path to pursue from the get-go.

Winning a game of Dune: Spice Wars is all about the long game. It isn’t about building the biggest army you can or racing down the tech tree. It’s about juggling your obligations and crises, dealing with unexpected setbacks and exploiting the right opportunities at the moment that’ll maximize the difference between you and the other factions.

If all that sounds a little overwhelming, fret not. Dune: Spice Wars gives you the option of hitting the space-bar and pausing the action. This smaller mechanical quirk makes a huge difference to the experience of playing a game with this many moving parts. It gives you a moment to take a breath, grapple with what’s happening on-screen and think carefully about your next move.

Even if you are in a race against time, there’s always enough give that you can take a minute to balance the various plates you’re spinning before adding another onto the stack. As a result of this inclusion, Spice Wars feel much closer to stuff like the Dune board game than most other real-time strategy games do. After a while, I actually found myself wishing that more games were unafraid to slow things down in the way that this one does. 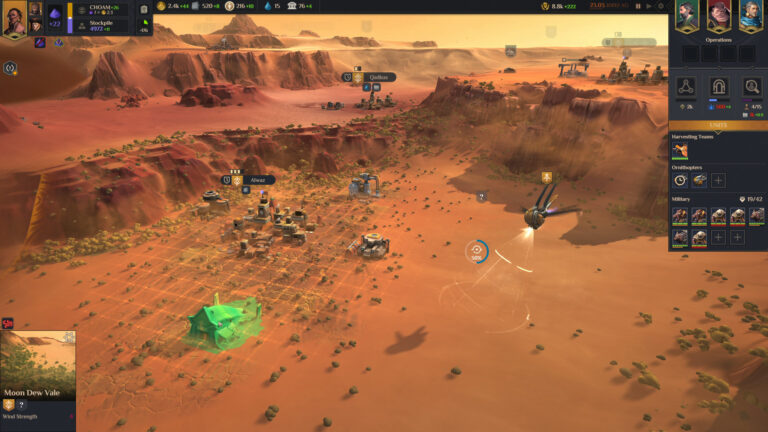 Most of the time, the factions of Dune: Spice Wars cohabitat Arrakis amicably. Your rivals feel less like merciless robots looking to terminate your presence on the map, but instead behave more like other players at a dining table.

Together, you’ll carve up the natural resources and neutral settlements on the map like colonialist Europe divided up Africa. From time to time, you might even sign a research or trade agreement with one faction to help you get ahead of another.

Sometimes though, conflict between the great powers of Arrakis is inevitable. Whenever that happens, Spice Wars is more micro than macro. It’s akin to Total Annihilation rather than Total War. Armies rarely grow in size beyond a dozen or so different units, are expensive to maintain and can easily be eaten by a worm, get eviscerated by a sandstorm or run out of supplies mid transit if you aren’t careful.

All this is to say that Spice Wars doesn’t fall into the trap of mistaking quantity for quality. The on-screen action is always pretty readable and the amount of variables in play, from terrain bonuses to defensive structures, give you plenty of room to get creative. 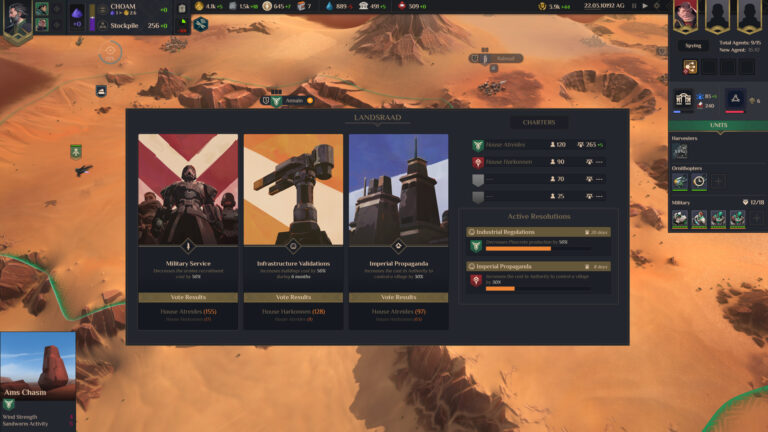 Of course, this is Dune we’re talking about. Military might is far from the only factor in play. Both short-term successes and long-term strategy has to be underpinned by smart diplomacy and good intelligence.

The former is structured by the Landsraad mechanic. For every week of in-game action that elapses in Spice Wars, new laws will be either enacted or rejected. Sometimes the effects of these laws are broad and beneficial, like reducing the upkeep of armed forces or cutting taxes. Other times, they are suppressive to the ambitions of a single faction.

The Attredies and Harkonnen’s hold more sway on this front relative to the Smugglers and Fremen. However, that’s not to say the latter can’t nudge the politics of the court in their favor.

In any case, the Landsraad makes the diplomacy mechanics here a lot more juicy to mess with than other grand strategy games of this type. Much the same can be said for the Spice Wars' spycraft mechanics.

Each faction recruits a roster of agents over time. These agents can be deployed to infiltrate the institutions of the Dune universe or the ranks of other players. Doing either will accrue Intel, a currency which can be invested in powerful, but consumable abilities that can quickly turn the tide of a battle.

These Intel abilities can be incredibly powerful in combat situations, but are also very useful in the hands of players who prefer to focus on the economic or diplomacy side of the game. When you have the ability to declare ceasefires or inspire mutiny within the ranks of your enemies, you don’t necessarily need to have a standing army ready to go.

Success will usually come easiest to those who are willing to try every tool at their disposal, but Spice Wars never forces you to play in any given direction. Your journey towards victory will likely follow the same contours from faction to faction, but there’s plenty of room for you to make that path your own.

Is Dune: Spice Wars worth the money? 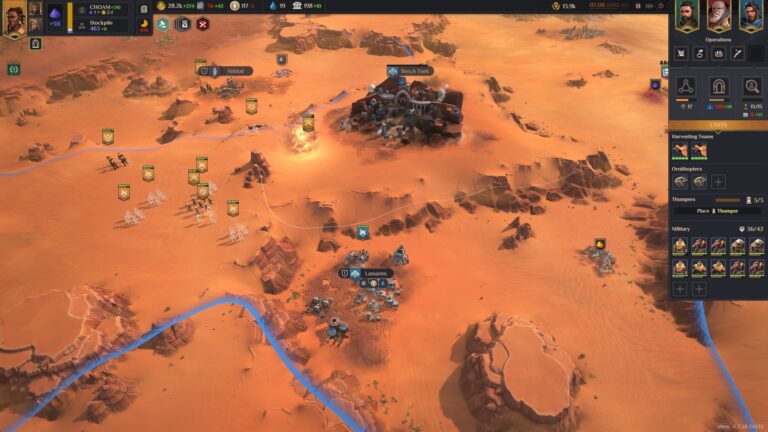 If the thrills offered by the recent film adaptation or a longer term fascination with Frank Herbert's science fiction series is the vector by which you’ve been drawn to consider picking up a copy of Dune: Spice Wars, I have some bad news. The fact that this is a strategy game set on Arrakis might actually be the least interesting thing about it.

Sure, Shiro games version of the Dune universe is dripping with flavor and texture that feels inspired by other adaptations yet wholly unique. Yet, the fact that the specific structure and pacing of the gameplay here feels so well complemented by the setting and subject material is ultimately secondary to the fact that the core gameplay loop is as compelling as it is.

This is all the more impressive when you factor in that Spice Wars has only just entered Early Access. If things are already this good out the gate, you’d expect that the final product will be even more fully featured and no less fun.

Games like Age of Mythology and Warcraft were one of the things that got me into PC gaming to begin and while my passion for them endures, the broader popularity of the genre has fallen by the wayside in the years since. We’re a long way from the temporary stay of execution that the Starcraft 2 trilogy bought the real-time strategy genre.

Dune: Spice Wars is not a board game, but the specific ways in which this initial incarnation feels like one make a compelling case that the once-mighty, now-vintage RTS might be overdue for a comeback.