The rise of streaming services and VPN use has seemingly stopped Australians from being so quick to pirate movies and TV shows.

It doesn’t feel like so long ago that Netflix first landed in Australia. Before that, the only way to stream content was via Foxtel Go or Foxtel Play (which later became Foxtel Now). Alternatively, savvier Aussie streamers were using a virtual private network (VPN) service to access Netflix internationally.

Of course, the other less-than-legal alternative to streaming was to pirate TV shows and movies. Fast-forward to today, though, and while Aussies still pirate content today, that trend appears to be on the decline for movies and TV shows. 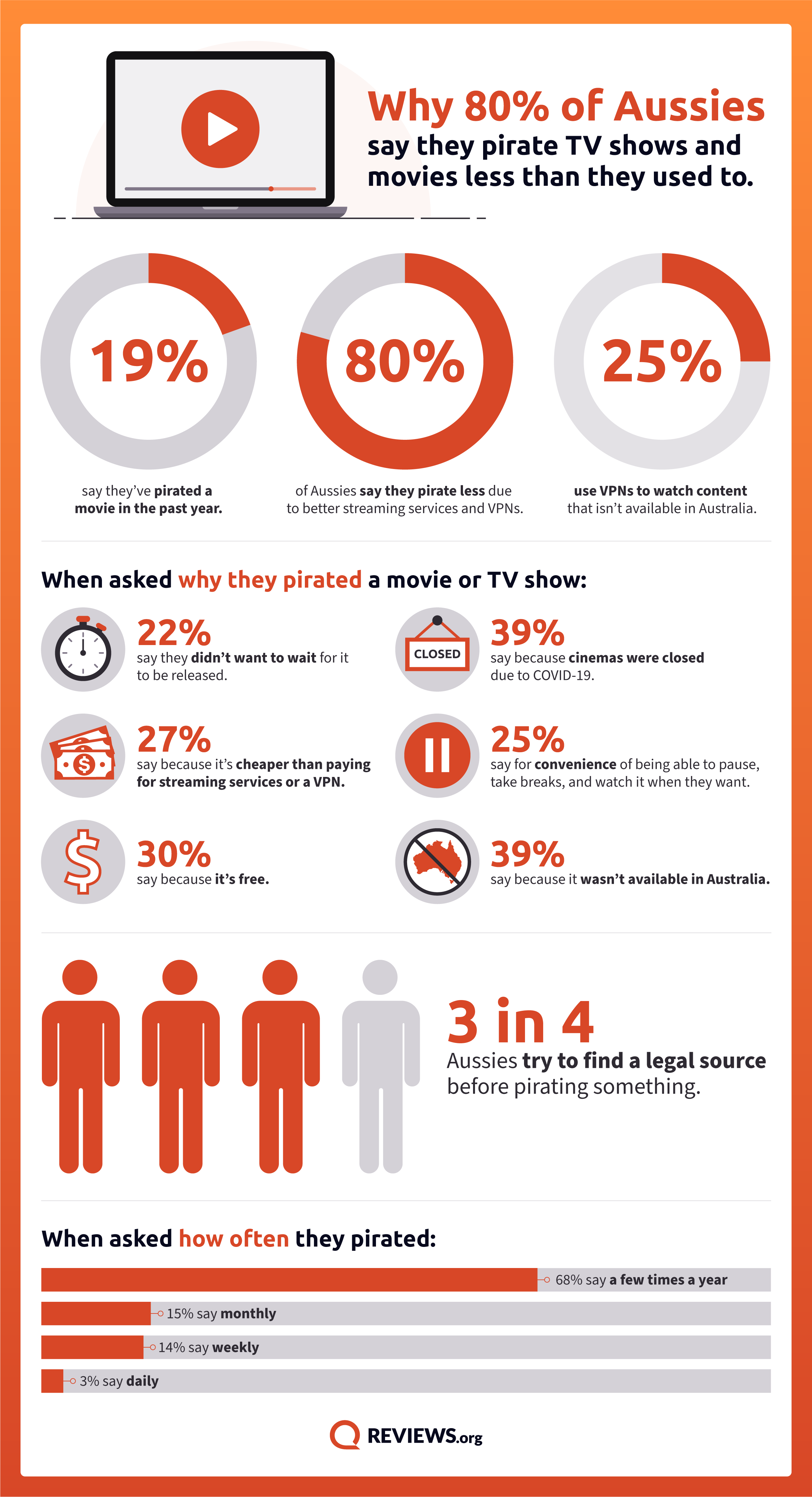 The rise of streaming services

In the past, this lack of access to streaming services and, arguably, unfamiliarity with VPNs, led to piracy being seen as a way to watch the latest movies and TV shows Down Under. These days, Aussies have a lot of streaming options, ranging from a sizeable library of Netflix movies and Netflix TV shows to alternatives that include Stan, Disney Plus, Prime Video and other streaming services of varying popularity and quality.

A decline of piracy in Australia?

According to our recent Pollfish survey, 19% of Aussies admitted to pirating a movie or TV show in the past year. The reasons for piracy included the TV show or movie being unavailable in Australia (39%), because it costs nothing (30%) and because it’s more cost-effective than paying for streaming services or a VPN service (27%).

In terms of how frequently these Aussies pirated, 68% admitted to a few times a year, with 15% claiming it was a monthly activity, 14% saying they pirated weekly and 3% confessed to daily piracy. Interestingly, close to three in four (74%) of the pro-piracy respondents said they try to sniff out a legal source before resorting to pirating a movie or TV show.

As for other reasons why Aussies pirate, 39% said it was because cinemas are closed due to COVID-19 restrictions, 25% claim it’s for the convenience of being able to pause and take breaks whenever they like, and 22% were impatient to watch content that would later be released in Australia.

VPNs vs piracy in Australia

Our survey results suggest that either Aussies are pirating the same or less, with 80% saying they don’t pirate more than they used to because of better access to streaming services or because they use a VPN. Though a legally grey area, some of the best VPN services can be used to access other Netflix libraries or popular international streaming services like Hulu and HBO Max, which are otherwise geoblocked in Australia. Doing so may violate the respective user agreements of such services, but this doesn’t make VPNs illegal to use.

Using a VPN to access international content appears to be a growing trend, with nearly one in four (24%) Aussie VPN users admitting they use their VPN service to watch content that’s otherwise unavailable in Australia.

We’re going to say it again: be aware that using a VPN to stream libraries or services unavailable in Australia tends to be in violation of the user agreement you’re required to consent to when signing up for a streaming service. Doing so may even lead to your account being suspended or cancelled. This is not something we recommend doing.

That said, if you want to try your luck, based on our tests, Windscribe VPN handles streaming services incredibly well, as does ExpressVPN, Hotspot Shield, NordVPN and CyberGhost VPN.

Any of those VPN options are a great place to start for VPN greenhorns or a highly recommendable place to pick up for seasoned operators.

We used Pollfish to survey 1,000 Australians about VPNs and, as part of that survey, asked how VPNs were used in correlation to piracy (for those respondents who said they had pirated in the past year). All of the results above are taken from this report.