A capable tablet that's stuck in the middle.

The 10th generation iPad is a capable tablet that should have been more affordable. A considerable price bump on last year's model makes Apple's latest tablet a confusing proposition. It's not quite a budget model despite making clear compromises.

The 10th generation iPad is great on paper. An entry-level iPad that finally adopts the modern trappings of the iPad Air and iPad Pro for a more consistent tablet family.

You get a cleaner design, a larger screen, and a USB-C port, in addition to the requisite under-the-hood upgrades. These are all welcome improvements over the 9th generation iPad, which is a clear outlier with its "classic" design and Lightning charging.

Yet despite succeeding the 9th generation iPad, the new iPad's price isn't very entry-level. You're looking at a minimum of $749 for the 10th generation device.

And then we have to consider the price of official accessories. The new Magic Keyboard Folio designed for the 10th generation iPad is $399, versus $269 for the Smart Keyboard that goes with the 9th generation iPad. All up, it's a minimum of $1,148 or $818, respectively.

This puts the new iPad in a bit of a weird place. It's not affordable in the same way its predecessor was, but there are also some clear compromises when compared to its pricier siblings. 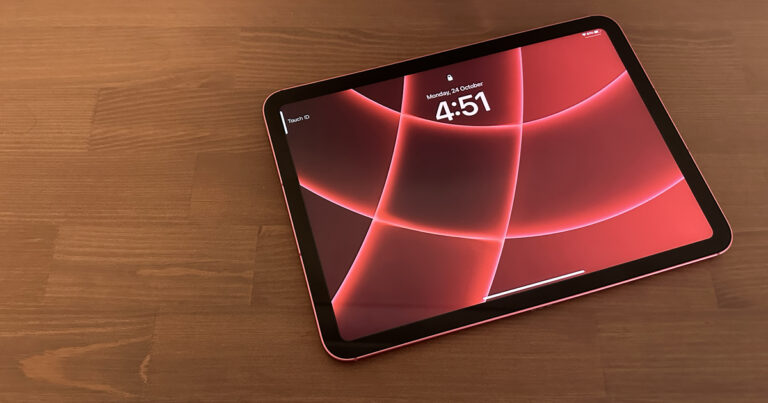 How much does the 10th generation iPad cost in Australia?

You can also get the new iPad on a plan. Here are the cheapest 24-month options: 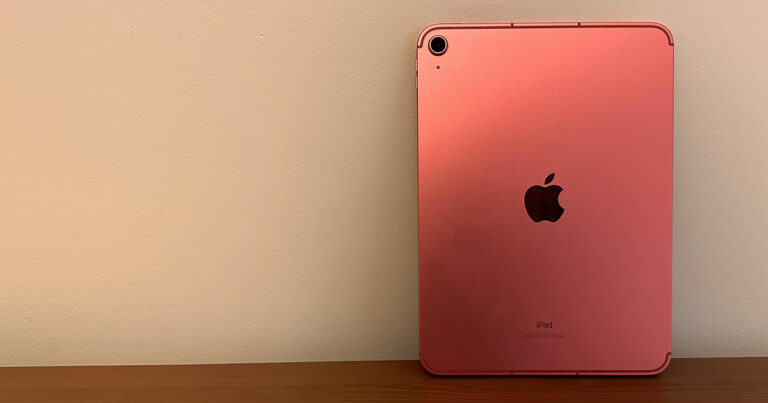 The 10th generation iPad trades in the classic bubbly iPad design with a home button for the new look iPad Air and iPad Pro aesthetic. This results in squared-off edges, a display that's grown from 10.2-inch to 10.9-inch, less bezel, and a fingerprint reader in the power button. As with the iPad Air, you don't get Face ID.

Apple has paired this with some of its funnest iPad colours yet. While you can still pick from a silver back if you prefer something a little more conservative, you've also got bright blue, pink, and yellow options to choose from. My review unit came in pink - which almost appears red in a certain light - and it's lovely.

While the new iPad follows tried and true conventions for the most part, it has one design feature you won't find on any other iPad: a landscape selfie camera. For the first time in the iPad's history, Apple has moved the front-facing camera from portrait orientation to landscape - and honestly, it's about time. This makes the 10th generation feel a lot more natural for video calls.

Similarly, the new iPad benefits from landscape stereo speakers. We've seen these in the iPad Air and iPad Pro for a while, but it's the first time Apple has done landscape speakers in a base model iPad. The speakers themselves are pretty good - albeit lacking in bass - but the new setup makes for a better viewing and gaming experience. You get a surprising amount of stereo separation. The headphone jack is gone, however. 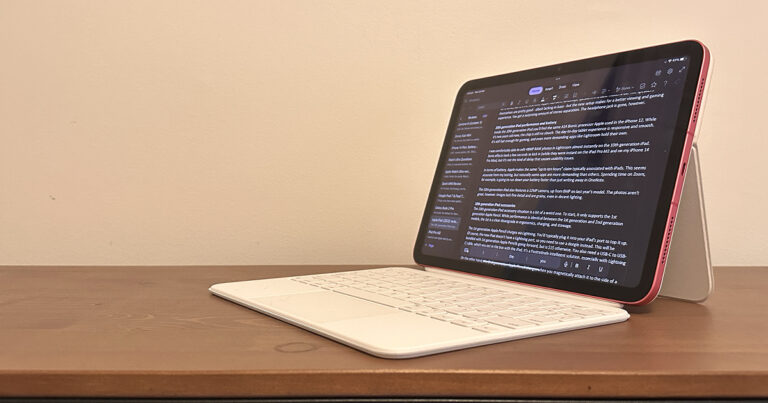 Inside the 10th generation iPad you'll find the same A14 Bionic processor Apple used in the iPhone 12. While it's two years old now, the chip is still no slouch. The day-to-day tablet experience is responsive and smooth. It's still fast enough for gaming, and even more demanding apps like Lightroom hold their own.

I was comfortably able to edit 48MP RAW photos in Lightroom almost instantly on the 10th generation iPad. Some effects took a few seconds to kick in (while they were instant on the iPad Pro M2 and on my iPhone 14 Pro Max), but it's not the kind of delay that causes usability issues.

In terms of battery, Apple makes the same "up to ten hours" claim typically associated with iPads. This seems accurate from my testing, but naturally, some apps are more demanding than others. Spending time on Zoom, for example, is going to run down your battery faster than just writing away in OneNote.

The 10th generation iPad also features a 12MP camera, up from 8MP on last year's model. The photos aren't great, however. Images lack fine detail and are grainy, even in decent lighting. 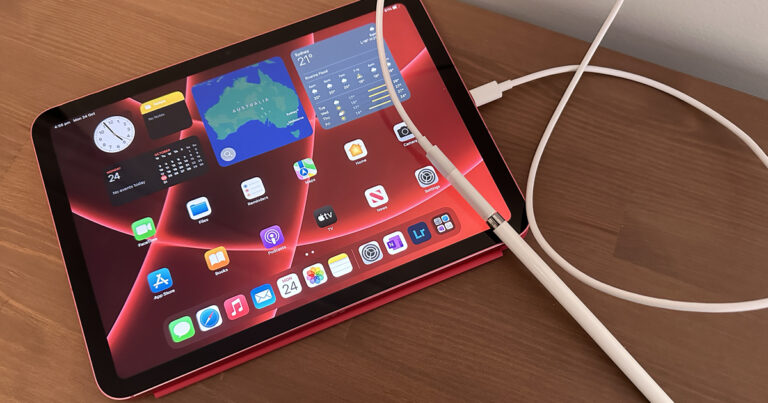 The 1st generation Apple Pencil charges via Lightning. You’d typically plug it into your iPad's port to top it up. Of course, the new iPad doesn't have a Lightning port, so you need to use a dongle instead. This will be bundled with 1st generation Apple Pencils going forward, but is $15 otherwise. You also need a USB-C to USB-C cable, which you get in the box with the iPad. It's a frustratingly intelligent solution, especially with Lightning set to go away as a standard.

On the other hand, the 2nd generation Apple Pencil charges when you magnetically attach it to the side of a compatible iPad. It's seamless, and also acts as a storage solution. I also prefer the matte feel of the 2nd generation Pencil, and the flat side gives it a better grip.

Maintaining compatibility with the OG Apple Pencil will surely be welcome for those who already have it, but there's no reason Apple couldn't offer support for both.

Apple's new Magic Keyboard Folio accessory is equally weird. Instead of using the same Magic Keyboard designed to go along with the iPad Air and iPad Pro, the 10th generation iPad gets an all-new product.

The Magic Keyboard Folio is a two part accessory. There's the keyboard itself, and a back cover that magnetically sticks to the back of your iPad and features a kickstand. The keyboard itself is great, and even features a row of function keys, which is a first for Apple. It's also nice that you can completely remove the keyboard when not using it, instead of just folding it back.

The Magic Keyboard Folio is however a bit cheaper than the standard Magic Keyboard. You're looking at $399 for the Folio, or a minimum of $489 for the previous version. Both are very expensive for a keyboard, but even if Apple wants to offer a more affordable option to go with the 10th generation iPad, it could have also offered the more practical Magic Keyboard as an upgrade pick.

Is the 10th generation iPad worth buying? 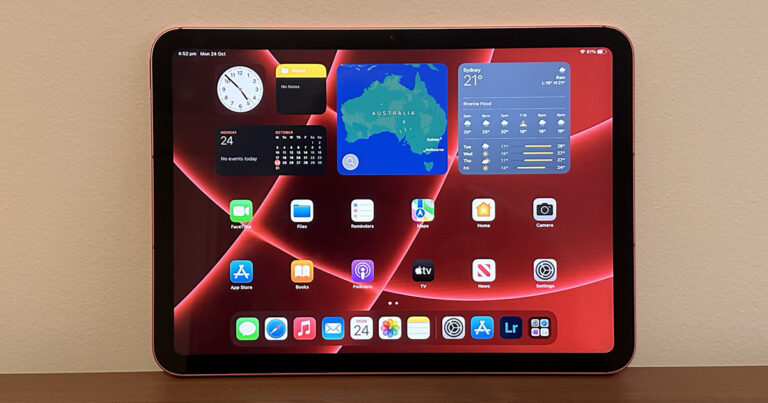 At $749, the new iPad is disoriented. It's not a value play in the same way its predecessor is. If you want a cheap iPad, you'll buy last year's model. You miss out on a nicer design and a slightly larger screen, but neither dramatically improves the day-to-day iPad experience.

In a similar vein, it feels like a compromise pick compared to the iPad Air, at least when it comes to accessories. The 1st generation Apple Pencil and Magic Keyboard Folio just aren't as practical as the official iPad Air accessories.

I'm sure there's a set of users who want the nicer design without forking out for the iPad Air and don't really care for accessories, but instead of making Apple's tablet family more cohesive, the 10th generation iPad has made it more confusing.