It produces a good image, but ultimately software holds back this wired outdoor security camera.

The D-Link DCS-8302LH is easy to setup and produces a decent image, but we struggled with the app after setup and found it's person recognition to be hit and miss. We also wonder if a wired camera is the best option for an outdoor setup, with access to power outlets difficult for most homes.

Before I begin the review I’d like to take the opportunity to pitch my services to the D-Link team. DCS-8320LH is not a great name for a gadget, and I think I can do better.

For example, one of the key selling points of the DCS-8320LH is that it is waterproof and can be used outdoors, so you can lean in there and call this the ‘D-Link Woodsman’ and appeal to the back-to-nature hipster set. Or seeing as one of the key uses of an outdoor camera is to deter ‘porch pirates’ this could be the ‘D-Link Porch Police’.

I’ll admit that the process of cooking up a catchy name is difficult, and that my suggestions suck, but in a world of Homepods and Nest Cams, a good name goes a long way.

What we like about the D-Link DCS-8320LH Outdoor Camera 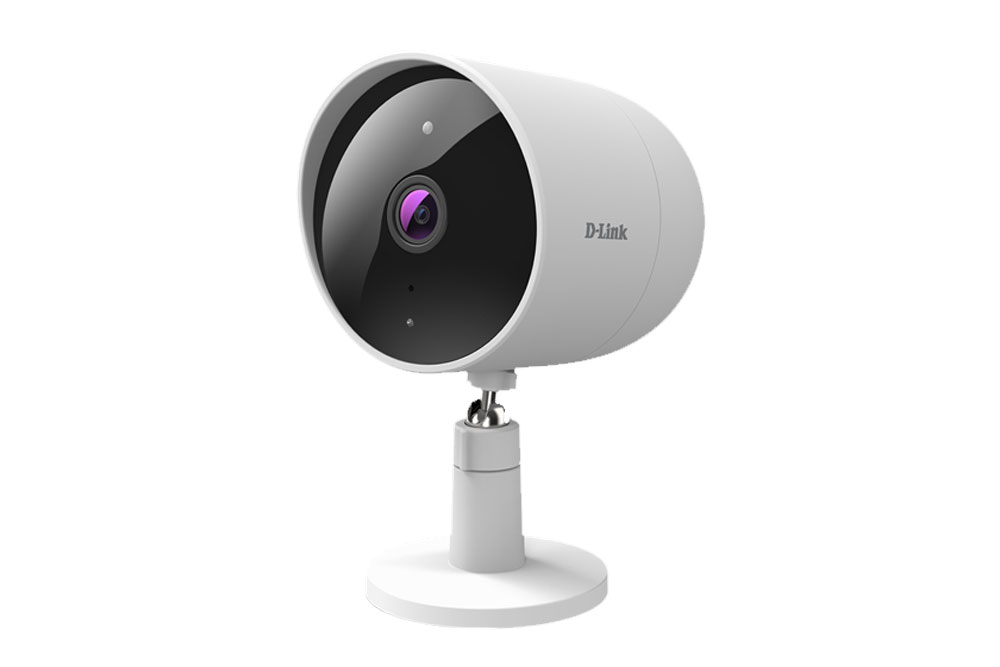 When you’re looking for DIY home security cameras you find there are a few distinct buckets of products. There are indoor and outdoor, wired and wire-free, cameras that require a dedicated or not, and ones that integrate with smart home setups and others that don’t.

The 8320 ticks a few of these boxes. Its weatherproof design means that you can set it up outside without worrying about the rain. The camera comes with a rubber seal that covers the power port, keeping everything dry. It also plays nice with Google Home and Amazon Alexa systems, so it will integrate with your existing smart home configuration. We found that as soon as we had set the camera up in the D-Link app, it showed up in both systems immediately.

The camera connects to your Wi-Fi network directly, meaning you don’t need to invest in a central hub for it to connect to. This cuts out a chunk of the cost of cameras from competitors like Arlo and Eufy. Setting up the camera was a breeze thanks to the easy-to-use D-Link App.

Image-wise, the 8320 has a 2-megapixel image sensor and can record at 1080p at 30 frames-per-second. This is pretty standard for security cameras, especially those in the $200 - $400 price bracket. In our tests, the image was sharp, colourful and clear. At night time, the image remains bright and easy to see thanks to a decent night mode.

What we’d love to see improved

The big question for us during this review is whether or not wired power is the right design for an outdoor camera. Even given the generous length of the included power cable, it was still a stretch to get it connected to a power outlet.

As mentioned above, the D-Link app is well designed and the setup process for the camera was simple, but we did struggle to use the app afterwards. For the first few days after we set up the camera we couldn’t log in to see the live feed from inside the app. We could see the feed via a web browser on a laptop and from inside the Google Home app on the same phone. Just as we were giving up hope (and a few days later) it finally started working out of the blue. Then it stopped again. Now it’s working again.

Years of reviewing gadgets has taught me, among other things, to be persistent when faced with inconsistent software, but I suspect someone who bought this camera might have given up sooner and returned it for a refund.

We’d also like to see the Person recognition software given a bit of a tweak too. We’ve installed using D-Link’s guidelines of between 2m to 2.5m off the ground, and we’ve found the results of its recognition software to be hit and miss, especially after dark. For the period of time that the camera sat above my door, I'd estimate it notified me about half of the times someone wandered down the path to my door, and almost of all of these happened during daylight hours. After sundown, the camera missed a number people coming to the door, but also notified me regularly when it spotted the headlights of passing cars.

The problem, of course, is that if the camera doesn't detect someone coming to the door, then it doesn't record the moment. If a burglar were to come down the driveway, I'd have a 50/50 chance of being able to view a recording of this person's face. I'd really like the odds of this to be much higher.

Also, while you’re weighing up your options and comparing costs, don’t forget that you need to factor in the cost of storage. Out of the box, the D-Link 8320 gives you the choice of subscribing to D-Link’s cloud service or paying extra for a micro SD card. You can manually save video and photos to your phone, but it can’t be done automatically.

Cloud storage has numerous conveniences, but price-wise, you might be better off investing in local storage. You can buy 128GB cards for under $50 these days.

The D-Link DCS-8320LH Outdoor Camera works as advertised, and our major concerns come back to the design of the camera, rather than the execution. If you’re investing in outdoor security cameras, and can choose between wired and wire-free models, then a battery-powered unit makes more sense to us.