The proceeds from the bundle will go to the International Medical Corps and Ukrainian organisation Voices of Children.

In just over 24 hours, 732 digital content creators and over 129,000 contributors on Itch.io have raised upwards of $1.8 million in support of the people of Ukraine. The Bundle for Ukraine features over 1,000 video games, books and tabletop RPGs and is available for a $10-minimum donation but you’re free to donate as much as you can spare to the cause.

With over nine days left, the Bundle for Ukraine has already had to double its goal from $1 million to $2 million; a stretch goal that will likely be reached before the day is out.

Donate to the Bundle for Ukraine here 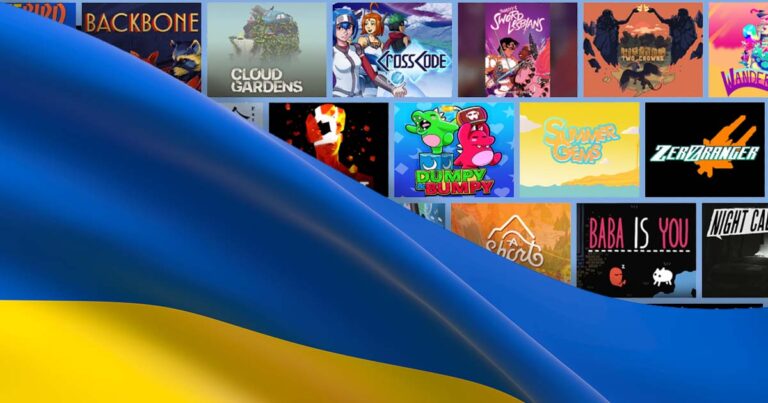 With over nine days left, the Bundle for Ukraine has already had to double its goal from $1 million to $2 million; a stretch goal that will likely be reached before the day is out.

The Bundle for Ukraine was first started by developer Necrosoft but an overwhelming number of developers and creators have shown up to support the cause, with almost 1,000 digital works available in the bundle from many well-known creators.

It’s no wonder the charity bundle has been a success. Amongst the mountain of indie games and tabletop RPGs we’re excited to check out– like Sweaters by Hedgehog(?!)– you will also find celebrated indies like Celeste and CrossCode and recent hits such as SkateBIRD and Backbone. All that and more for an incredibly good cause.

Each game purchased with your Bundle for Ukraine donation will be available via direct download on the title’s itch.io page once you’ve named your price for the bundle. All proceeds made through the bundle will be split between two charities: the International Medical Corps and Voices of Children.

About the charities involved in the Bundle for Ukraine

When you purchase the Bundle for Ukraine through itch.io, your money will go to two important charities currently aiding the people of Ukraine: the International Medical Corps and Voices of Children.

The International Medical Corps has volunteers on the ground in Ukraine and is working with various local organisations to provide access to medical and child protection services, as well as mental health and psychosocial support for civilians impacted by war. Even if you’re not particularly interested in the indie game bundle on itch.io, you can donate to the International Medical Corps here.

The Voice of Children is a Ukraine-based organisation that focuses on providing appropriate psychological and psychosocial support to children who have suffered from the impact of Russia’s war operations in Ukraine. Voice of Children is working with various villages and townships along the frontlines of Donetsk and Luhansk. You can show your support for Voice of Children and those affected by becoming a Patreon patron or donating via PayPal. There are even options to donate with Bitcoin and Ethereum. Donations can be made via the Voices of Children website.