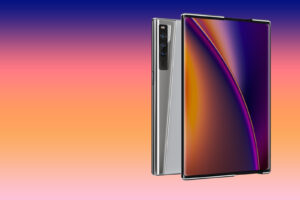 Foldable phones are so last month. Well, according to OPPO at least, if their newly announced OPPO X 2021 rollable concept smartphone is anything to go by.

Unveiled at the annual OPPO Inno Day event, the OPPO X 2021 is the Chinese manufacturer's first attempt at an expandable display and, unlike foldable devices from the likes of Samsung and LG, doesn't display a visible crease. Instead, the screen unfurls from one side using OPPO's proprietary Roll Motor, creating a flat, seamless display of 7.4 inches.

OPPO has applied for a staggering 122 patents in the process of developing the OPPO X 2021, including an interlocking backplate to provide additional support and strength to the device when it's unrolled, plus a plate-within-a-plate design to ensure the battery and other essential bits and pieces remain in place and are safe from dust, dirt and other debris.

The mind-bending device could be a good alternative to foldable phones, which, despite becoming more durable with each new release, are still somewhat bulky and heavy.

There's no word yet on when (or even if) the OPPO X 2021 will be released, given it's still very much in the concept phase, however, the company's Vice President, Levin Liu, says they hope to bring it to customers "at the right time".

The OPPO X 2021 isn't the first time a smartphone manufacturer has flirted with the idea of a rollable phone. Back in March, TCL unveiled two new prototypes - one that functions and looks quite similar to OPPO's project, and another that both folds and rolls, in a kind of origami-inspired fashion.

We are unveiling a smartphone concept with rollable display and tri-fold tablet today. Click to see how @BBCClick went hands-on with the prototypes. #TCLmobile #DISPLAYGREATENESS #FoldablePhone https://t.co/OnoiLrO7AV

If this is what the future of smartphones will look like, I for one am pretty damn excited.