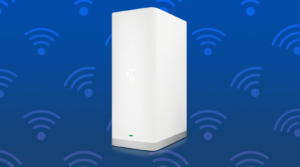 Broadband internet is built to be more reliable than mobile internet. But even with a fixed-line NBN connection, there may be times when there’s a network outage.

To get back online, you can try to troubleshoot NBN issues, or you can opt for NBN with 4G backup.

What is 4G backup?

In the event of an NBN outage, a modem-router with 4G backup automatically shifts your connection from an NBN connection to a 4G mobile connection.

Unless you’re on an NBN 12 or 25 plan, the 4G backup speeds are much slower, but it’s effectively a peace-of-mind solution for keeping your home connected while the NBN is getting back online. While other forms of 4G mobile internet tend to have faster speeds – which is a big part of the reason why Australia’s average mobile speeds are above 65Mbps – NBN 4G backup connections tend to have much slower capped speeds.

Outside of speed, the big disclaimer for NBN plans with 4G backup is that you need to be in an area serviced by the respective provider’s mobile network to take advantage of it.

Currently, there are five NBN providers with 4G backup and a sixth on the way. Telstra, Optus, Internode, iiNet and Vodafone currently offer NBN internet plans with 4G backup, while Aussie Broadband plans to launch its take on the formula sometime in the near future.

Check out the widget below for a round-up of the cheapest NBN plans that each has to offer.

Signing up for any available Telstra NBN plan and you'll score a third-gen Telstra Wi-Fi Smart Modem (it’s technically a modem-router), which costs nothing and is yours to keep if you stick with Telstra for 24 months.

Take advantage of the lack of a contract to churn early, though, and you’ll be up for the pro-rated cost of the Smart Modem, tallied at $9 per month remaining in a two-year term.

If your NBN connection goes down, the Telstra Wi-Fi Smart Modem 3 takes over with a 4G backup connection, which is limited to 25Mbps download and 5Mbps upload.

If you’re connected via Telstra’s 500GB Data (NBN) plan, backup data counts towards your monthly quota, otherwise, you effectively have access to unlimited data because Telstra’s other NBN plans are all unlimited.

Check out Telstra’s NBN plans below:

If your Telstra Wi-Fi Smart modem is stuck in backup mode, you may receive this message. “Your broadband service is working in backup mode.” If this stretches beyond the repair of an NBN outage, contact Telstra’s NBN faults team on 1800 834 273.

Like Telstra, all Optus NBN plans come with a 4G backup device which, for this provider, is the Optus Ultra WiFi Modem (it’s also a modem-router).

The bonus here is if you’re in one of the rare areas not yet connected to the NBN, the 4G backup part also works as a tide-over until your area is connected.

Because all Optus NBN plans have unlimited data, backup data is also unlimited, albeit restricted to 25Mbps download and 2Mbps upload speeds.

The Optus Ultra WiFi Modem is yours to keep, with a catch: despite the lack of contracts for Optus NBN plans, you have to stick around for 36 months to not pay extra for the device. Leave before those three years and you’re up for a $252 cost, minus $7 per month that you’ve already been connected.

Check out the Optus NBN plans below:

Like Optus, all Vodafone NBN plans include unlimited data, which likewise translates to unlimited 4G backup if you opt for the Vodafone WiFi Hub (again, it’s a modem-router).

In a long-running promotion, you don’t have to pay extra for the WiFi Hub if you stay with Vodafone for three years; otherwise, despite Vodafone’s no-contract NBN plans, it’s $180 less $7.50-per-month remaining on a two-year term.

The 4G backup speeds are the slowest of the three – 12Mbps download and 1Mbps upload – and can be used for up to 30 consecutive days or when the broadband fault is rectified sooner. You have to call Vodafone to activate the 4G backup service.

Check out Vodafone’s NBN plans below:

As part of a newly-announced partnership that'll see the popular internet provider leverage the Optus mobile network, Aussie Broadband have said that they'll soon offer 4G-backup on their NBN plans. However, they haven't yet detailed when this service will arrive nor how much it will cost.

In the meantime, you can find a round-up of Aussie Broadband's most NBN popular plans below:

iiNet currently offers a 4G backup service on its NBN internet plans. However, in contrast to Optus and Telstra, this is an optional add-on rather than something that's part of the core plan.

If you sign up for this plan, you'll be relying on the TP-Link VX420-G2v. This dual-band modem-router features the standard four Ethernet ports and also supports Wi-Fi 6, which can be a noticeable improvement over Wi-Fi 5 if you have Wi-Fi 6-compatible devices.

iiNet customers looking to make use of this service will need to make sure they select the "High-Speed NBN Modem with 4G Connection Backup" option when they signup for an NBN plan through the provider.

The modem itself costs $0 upfront, but iiNet will charge a shipping fee of $10 and customers will have to pay off the value of the modem over the life of their plan. Over a two-year period, this works out to be around $8/month.

Internode's 4G backup service is more-or-less identical to iiNet's offering. You even get the same type of modem-router if you sign up. You're able to get it on any of the provider's existing NBN plans, so long as you remember to check the box marked "High-Speed NBN Modem with 4G Connection Backup" during the checkout process.

Both iiNet and Internode customers using the TP-Link VX420-G2v are able to access the Vodafone 4G network with download speeds of up to 12Mbps and upload speeds of 1Mbps.

Check out the widget below for a round-up of popular Internode plans that you might want to consider pairing up with the modem.

Alternative providers with the fewest outages

Having 4G backup is great, but having a provider with so few outages that you don't even need it is even better.

According to the most recent broadband performance report by the ACCC, there are just three providers reporting 0.17 or fewer daily outages per service that last longer than 30 seconds: Dodo, iPrimus and Optus. Compared to Telstra's  0.25 and TPG's 0.44 daily outages, that's a pretty significant difference.

Here are the most popular NBN 50 plans from each of the three providers.