$599 for a Nintendo Switch, Pro controller and two Mario games

We love a good sale, and when that sale just so happens to pertain to one of our favourite consoles ever, obviously we have to share it with the class. Right now, Catch is slinging a massive Nintendo Switch bundle for $599. That might not sound like a great deal, given you can occasionally get a bundle with the console and one game for between $400 and $500, but when we say this is a massive bundle, we mean it. In addition to the console, you'll also score a Nintendo Switch Pro controller (which usually retails for $99.95), plus not one, but two Mario games. 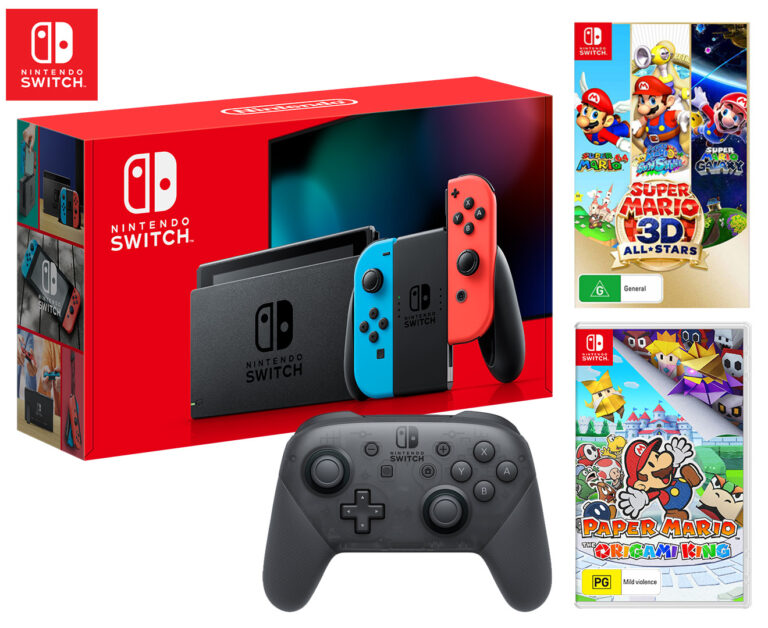 First up, there's the limited-edition Super Mario 3D All-Stars - a collection of three Super Mario games (Super Mario 64 on the Nintendo 64, Super Mario Sunshine on GameCube and the Wii's Super Mario Galaxy) all in one neat little package. After launching in September for up to $79.95, this 35th anniversary release will no longer be available for purchase either physically or digitally from March 21, so it might end up becoming something of a collector's item.

Finally, you'll also get another recent Mario title, Paper Mario: The Origami King (RRP $79.95), which dropped mid-way through last year. If you ever played a Paper Mario game on an older console, you'll notice that while some elements have been maintained, Nintendo have taken the new entry in quite a different (but still great) direction, with more of the combat-style gameplay found in Paper Mario: Sticker Star on the 3DS and Paper Mario: Color Splash on the Wii U.

Once you've got your shiny new console, be sure to check out our top picks for the best Switch games (and best free games!) to start building your collection. Happy gaming!