34% of Aussies who watch reality TV lie about it

Of those, 74% say it’s because they feel ashamed.

Ask any Aussie their guilty pleasure and you’ll likely hear ‘reality TV’ as one of the most common responses. From home reno shows like The Block to the wholesomeness of MasterChef and Lego Masters, these days, there’s a reality show to cover pretty much any interest - no matter how niche.

But one particular category seems to transcend all logic, sucking in even the most unexpected friends and family - reality TV dating shows. With the eighth season of the controversial (yet consistently high-performing) Married at First Sight Australia now at an end, we decided to check in on drama-loving Australians to see what they really think about reality TV dating shows. 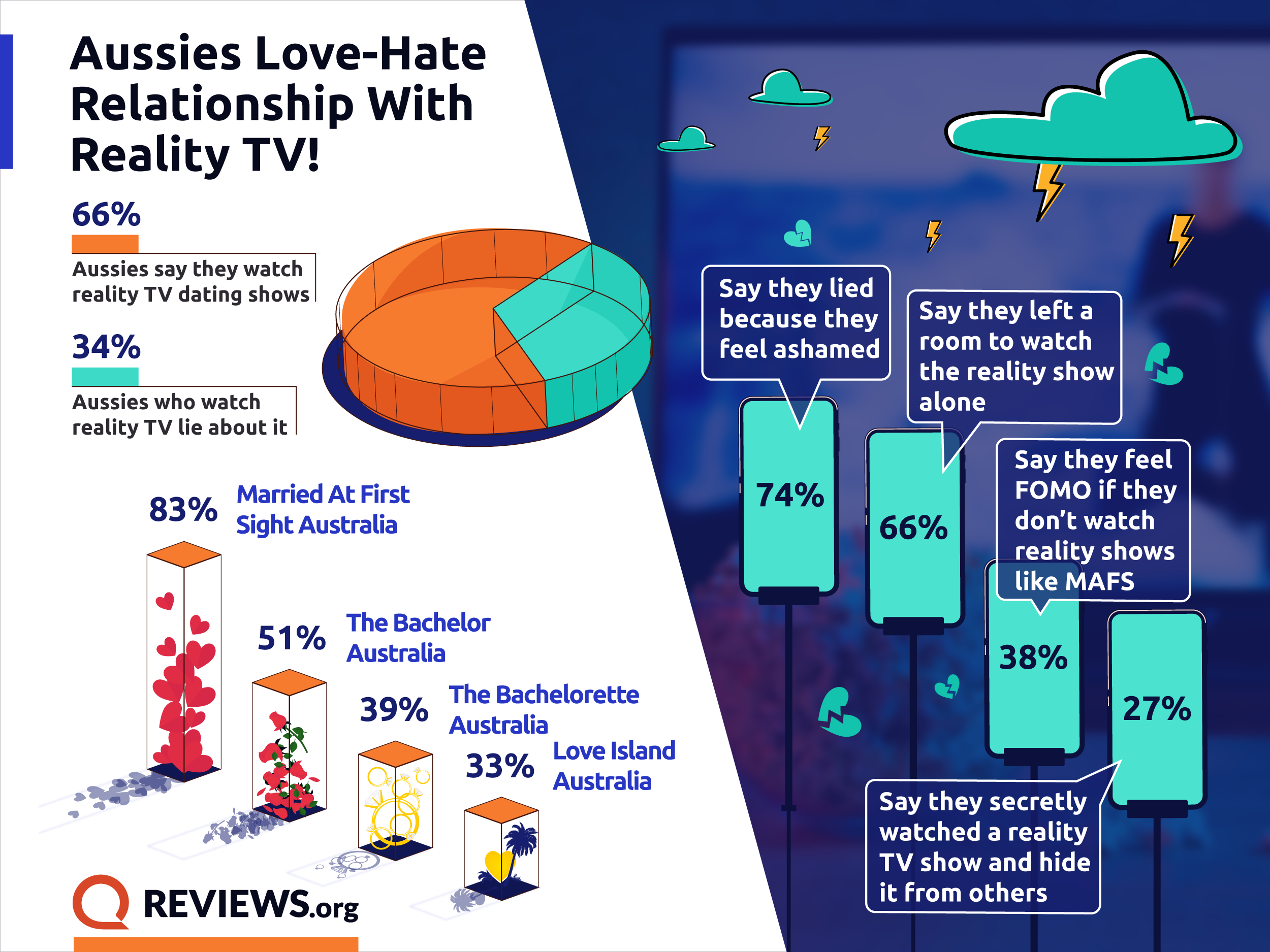 Despite years of critics labelling reality TV shows as ‘trashy’ or ‘fake’, the genre still has us well and truly in its grips with 66 percent of the Australians we surveyed admitting to watching reality TV dating shows.

Of those who do watch it, 34 percent said they’ve actually lied to a friend, partner, family member or coworker about it, with the most common reason being that they’re ashamed to admit it. There’s also 27 percent of reality fans who watch dating shows in secret and hide it from others, with 66 percent saying they’ve left a room to watch the show alone. As for those who aren’t up-to-date on the latest rose ceremonies and group dinner parties, 38 percent say they feel FOMO if they’re not watching shows like MAFS.

What shows are we watching the most?

Of the two in three Australians who admit to watching reality TV dating shows, which ones are the most popular? Well, it shouldn’t come as a surprise that ratings juggernaut MAFS is way out in front, with 83% of reality fans following every commitment ceremony and breakup. Our version of the show is even proving to be an international success, with the sixth season (which originally aired in 2019) debuting on Channel 4 in the UK to huge ratings earlier this year.

Coming in at second place is The Bachelor Australia, with 51 percent saying they watch it and 39 percent watching its sister show The Bachelorette Australia.

Where to get your next reality TV fix

While our survey looked at Australian reality TV dating shows, it’s also important to note that many of us are looking further afield when that season of MAFS finally comes to an end. Most of Australia’s free-to-air VOD services also offer recent seasons of international franchises like Love Island UK (9Now), Are You the One US (7plus), The Bachelor US (10play) and China’s If You Are The One (SBS On Demand). There’s even a dedicated reality TV show streaming service, Hayu, that launched in Australia in 2016 and by 2019 had an estimated subscriber base of 300,0001. Even Netflix has jumped onboard, launching Too Hot to Handle and Love is Blind in 2020 to huge success.

We surveyed 1,000 Australians about their reality TV dating show watching habits, and analysed the findings for this report.