The top 10 most popular TV shows and movies streaming in Australia according to Justwatch.

How are we doing, Australia? Hanging in there? I don’t know about you, but for me, the latest lockdowns sting a little more than last year’s. As silly as it might seem, the plans I made to go see Marvel’s latest blockbuster Black Widow at an actual cinema with actual overpriced movie popcorn and actual sticky floors was the first true sign that things were returning to normal. With those plans dashed, we’ve found ourselves inside again, debating the value of a $35 digital ticket on Disney Plus to watch a single film at home like we would any other movie streamed, purchased or pirated.

It seems like many Australians were asking the same question this week, as Black Widow was the fourth most popular movie across every streaming service in Australia according to the popularity rankings from JustWatch.

Black Widow's popularity probably won't come as a surprise but have a gander at the list and you're sure to find some good recommendations based on what other people are watching.

Note: Top 10s are based on the JustWatch popularity score for TV series and movies in Australia between the 12th of July and the 18th of July.

Most popular movies in Australia this week

In movies, the first place goes to the long-delayed horror A Quiet Place II, which got an early rental release on all the usual digital stores (Apple TV, Google Play etc.). It also makes sense that 2018’s A Quiet Place came in third place, with many Australians looking to rewatch the original before its sequel. That one’s also exclusive to digital stores but is available to rent or buy at a more reasonable price ($2.99 to rent, $4.99 to buy).

With all the (mostly negative) talk surrounding this year’s Space Jam: A New Legacy, it’s no wonder that the original Michael Jordan-led Jam from 1996 came in second place. Space Jam is streaming on Netflix, Binge and Foxtel Now.

Here’s the full list of the 10 most popular movies streaming in Australia this week and where you can stream them:

Most popular TV shows in Australia this week

Where the list of movies is littered with sequels, prequels and blockbusters, the list of trending TV shows is a little more interesting. In first place, you’ve got Foxtel and Binge’s comedy crime-drama Mr Inbetween (which just got its third season) and in second place, there's BBC’s hit cop drama Line of Duty. The latest season of Line of Duty wrapped up a few months ago but it has been a mainstay in JustWatch’s popularity charts ever since. That probably has something to do with the fact that the first 5 seasons are available on both Netflix and Stan while the latest season is exclusive to the relatively new streaming service, Britbox. Further down the list, you’ll find Apple TV+ exclusive Ted Lasso in third place, likely because of people rewatching in preparation for the second season (which debuts on the 23rd of July) and in fourth place, The White Lotus a brand-new HBO mystery on Binge that was recommended to me as a good holdover between Succession seasons and I can confirm it scratches the same itch (dumb rich people suffering, basically).

Here’s the rest of the most popular TV shows streaming this week in Australia and where you can stream them: 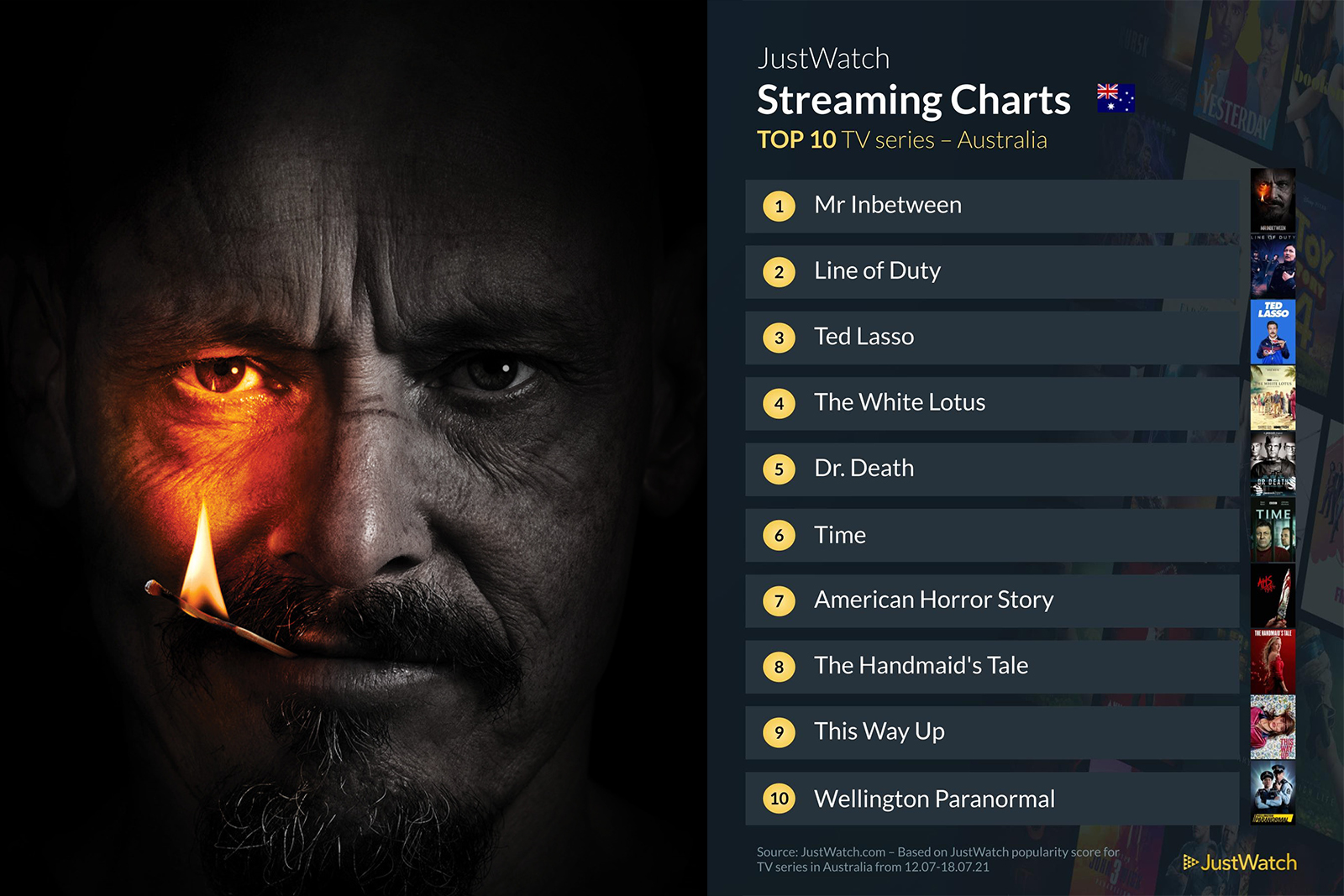