We hoped AT&T TV NOW’s name change would usher in improvements, but it seems like it’s on a downhill roll instead. 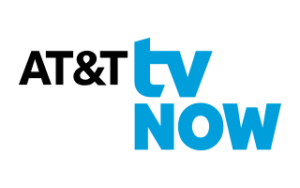 The streaming service formerly known as DIRECTV NOW rebranded as AT&T TV NOW in the summer of 2019. Try saying that five times fast.

Around the same time, prices for the re-branded streaming service went up by at least $10 more a month while its packages and channels shuffled around. Needless to say, we were all left scratching our heads.

On the plus side, AT&T TV NOW still offers benefits if you’re switching from traditional cable or satellite TV. There are still no extra fees or contracts. But does that make it a good deal? Let’s find out.

AT&T tried to distract us from recent AT&T TV NOW price hikes with shiny premium channels like HBO and CINEMAX. Ok, sure, you can get some premium channel love even in a few of its lower-tier packages, we’ll give it that.

But currently, AT&T TV NOWs base package is one of the most expensive out of any we’ve reviewed. Its only contenders for the title of “most expensive starter package” are YouTube TV, Hulu + Live TV, and fubo Standard.

Channel availability and pricing may vary by location.

Unlike Sling TV’s pricing structure, AT&T TV NOW makes sense because the more you spend, the more you’ll get without losing channels in lower-priced packages.

Except for those premium channel freebies.

PLUS and MAX both include HBO (and MAX also includes CINEMAX), so you can keep up with Succession.

But if you upgrade to the ENTERTAINMENT package or beyond, you lose out on HBO, unless you pay $15 per month extra for the HBO add-on. (The CINEMAX add-on is $11 per month extra.)

Our recommendation: AT&T TV NOW PLUS

We like that the lowest-priced plan, PLUS, includes ESPN, Cartoon Network, TNT, and other top channels. It even includes HBO (which is usually $15 per month or more), but it still comes at a high price compared to other streaming services’ base packages.

Despite that,AT&T TV NOW can still be a great alternative to cable or satellite TV. You get DVR and video on demand, and there’s no contract to sign.

It’s a decent deal, but we still aren’t happy about those recent package price increases in exchange for fewer channels.

What AT&T TV NOW package is best for you?

You’ll get the best value for the price with PLUS, the lowest-priced package. It includes HBO and most popular channels. It’s missing AMC, Discovery, Food Network, and some other favorites, but it’s almost half the price of the ENTERTAINMENT package, which includes these.

MAX includes more sports networks than PLUS and still includes HBO. You’ll also get CINEMAX. These additions may warrant the extra $20 a month for some sports and movie fans, but it’s still spendy.

This is the first package that includes a lot of popular channels like AMC, but for its price, we’re not sure it’s worth it compared to other streaming providers.

What about the rest? We have a hard time recommending the higher-tier plans for anyone besides the “Who cares about price? I want it all!” crowd.

Even the ULTIMATE package’s high price stands out only because it comes with STARZ ENCORE channels—which is not worth it, in our opinion.

At that price point, unless you’re contract-phobic, you might as well go with regular DIRECTV and get a season of NFL SUNDAY TICKET included. Wink, wink, nudge, nudge.

AT&T TV NOW hooks you up with some of the best channels in the lowest-priced packages.

Most streaming services hold some of the most popular channels hostage on highest tier plans to get more people to spend more. It makes sense as a business move, but we appreciate that AT&T TV NOW includes heavy hitters HBO and CINEMAX in the lower-tier plans. 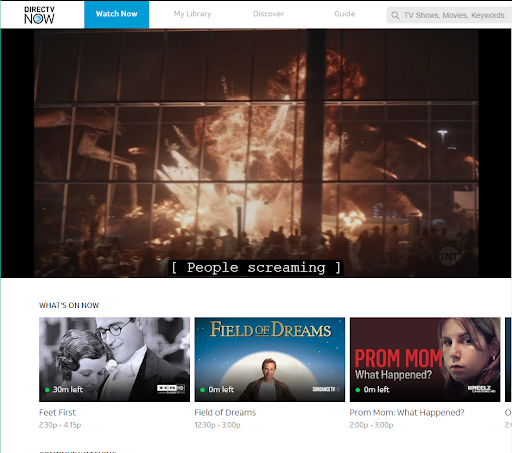 ATT TV NOW allows you to browse while you watch—even if a monster is destroying the city on-screen.

AT&T TV NOW scores points for catering to most people with its most affordable plans, but from a pure price point, it’s twice as expensive as Sling TV’s base packages that start at $25 per month. (But to get as many channels with Sling, you need to upgrade to $40 per month. And then add $5 for DVR use, and they’re nearly the same price.)

Local channel availability and pricing may vary by location.

The broadcast networks like ABC, CBS, FOX, and NBC carry some of the most popular shows in the nation, like This Is Us, The Bachelor, and Modern Family. And don’t forget the biggest viewership of all: NFL Sunday (and Thursday) Night Football.

Hands down, the best way to check your local channel access  is to enter the ZIP code where you’re streaming.

If you’re worried about keeping your local channels after checking availability with AT&T TV NOW, you can always grab an antenna for $20–$40.

We recommend an antenna for just about everybody because you’ll always have free HD channels, whether or not you have a cable, satellite, or streaming service.

Here are the only things we don’t love about antennas:

If these drawbacks aren’t a big deal for you, we recommend checking out the Clearstream Eclipse on Amazon, which is the best-working (and best-looking) antenna we’ve reviewed.

We like the inclusion of HBO on PLUS and MAX, but we’re kinda surprised to see the more expensive plans require a $15-a-month add-on to tune in for the next episode of Big Little Lies.

Still, these are pretty decent prices for channels that may cost $15–20 per month on other streaming and TV services.

Channel availability and pricing may vary by location.

Even on the lowest-priced package, AT&T TV NOW (formerly DIRECTV NOW) includes ESPN and ESPN2, FS1, and TNT. But sports fans experienced a huge loss when the service dropped the NFL Network.

Yup, that means no more NFL SUNDAY TICKET on AT&T TV NOW—even though it was limited to only a few lucky people in the first place.2 However, it’s still available on DIRECTV or NFLSUNDAYTICKET.TV. Still, cue that sad trombone.

While AT&T TV NOW covers a lot of bases even in its lower packages, to get TyC Sports, Univision Deportes, FOX Deportes, and ESPN Deportes, you’ll want to add the Deportes pack.

AT&T TV NOW now gives you 500 hours of cloud DVR storage instead of 20. And the DVR will save your recordings for 30 days.

It doesn’t compare to YouTube TV’s unlimited storage for nine months, but it is free as opposed to the $5-per-month charge from Sling TV for only 50 hours of storage.

We do like that you can record almost any channel with AT&T TV NOW’s DVR—though the fine print does mention recording isn’t available for all channels.

We didn’t run into many problems, but it wasn’t perfect.

AT&T TV NOW’s interface is user-friendly and straightforward, and it provides a few different ways to find a show worth watching.

One of our favorite features is that you can keep watching your current show while you look through the catalog.

That way, you can listen to the soothing sounds of Jersey Shore while searching for Call Me by Your Name. And the ability to swipe left or right to change the channel brings home sweet memories of the days we used an actual remote. (To think!) 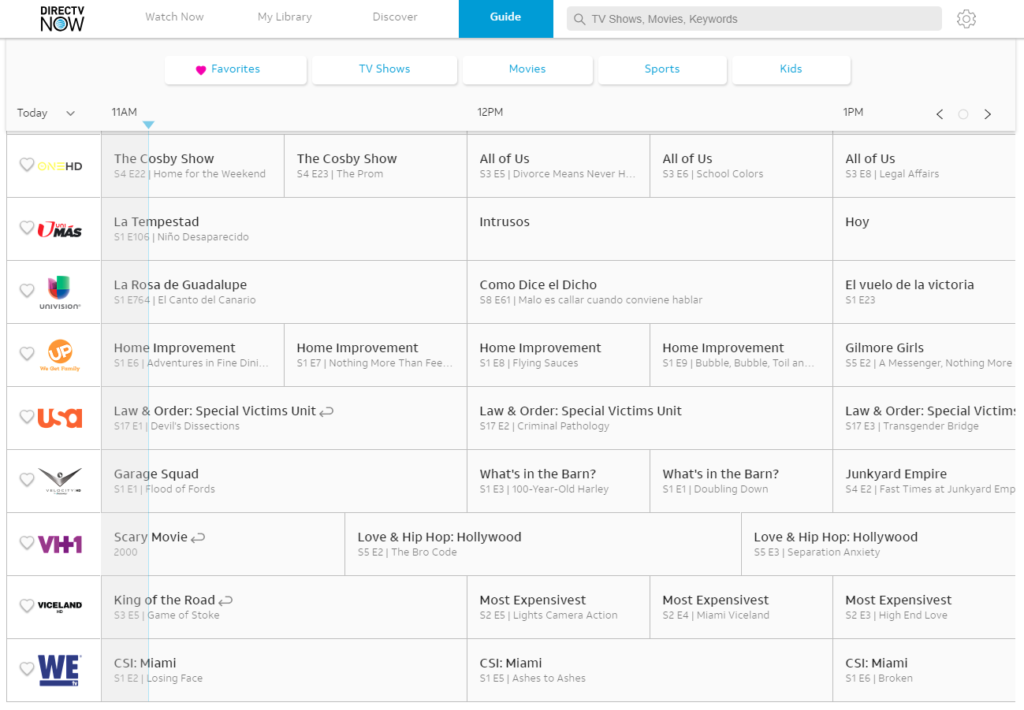 AT&T TV NOW has the following navigation tabs for browsing:

There’s also a search function, which worked fine for everything we needed to find, including The Venture Brothers, Property Brothers, and Step Brothers—all the bro-shows you can handle, really.

You can’t keep the window in the smaller theater mode and use timeline controls. We assume you’ll be watching fullscreen most of the time, but it’d be nice to back up a few seconds to catch dialogue you missed while browsing. You can pause and play, however. 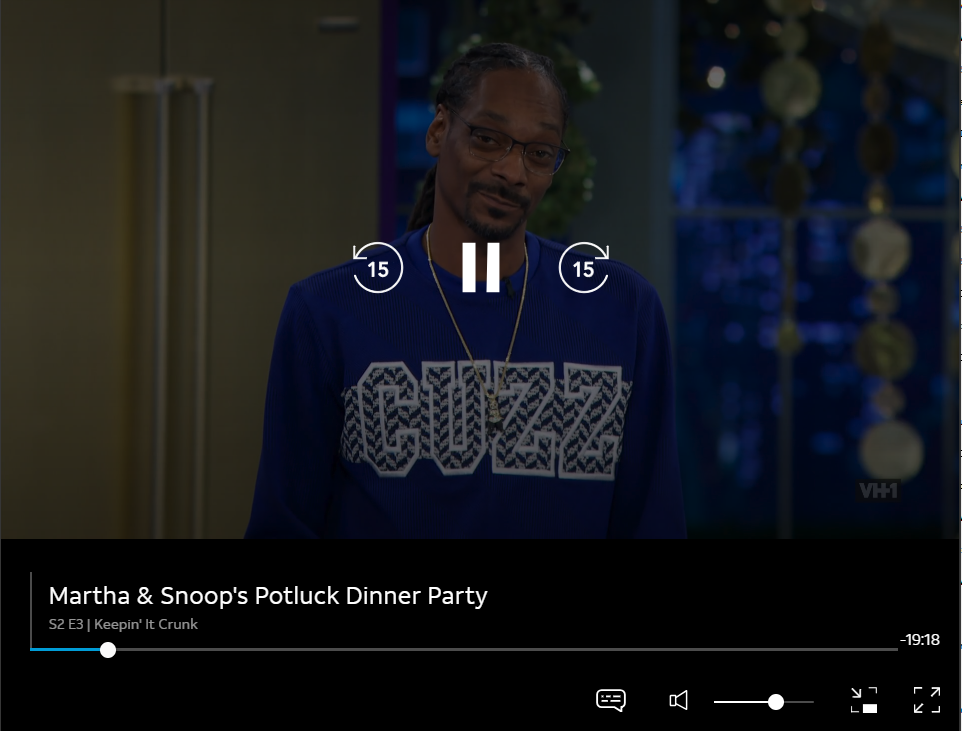 Snoop’s amusement shows how silly it is to take up the whole screen with a simple menu.

Another thing: it’s a little annoying that by hovering over the timeline, the whole screen gets taken up by the time controls (rewind, pause, fast-forward), especially since these playback controls don’t work for every show.

AT&T TV NOW will run into problems if you have a lot going on with your watching device. Like if you’re watching video on your laptop, but also trying to edit photos and read through 30 tabs of news articles, you may get a glitched-out video or even an error screen letting you know you need to slow your roll.

Of course, internet speed itself is a factor, as well as how many devices are using the same Wi-Fi network. For better performance, get a dedicated streaming device like this Apple TV on Amazon and connect it to your TV.

AT&T TV NOW isn’t perfect, but you get the best channels in the lowest-priced packages.

We like the inclusion of HBO on PLUS and MAX, but we’re kinda surprised to see the more expensive plans require fifteen dollars cash extra a month to get all that HBO goodness.

And you hate to see the recent loss of NFL SUNDAY TICKET, even if access to it through AT&T TV NOW was limited.

Still, you get lots of sports love in each package, and the premium channel costs are on the low end of the price spectrum compared to some other streaming services. If AT&T TV NOW can lower its package prices and get NFL Network back in its channel lineup, we might start singing its praises again.

AT&T TV NOW is a live TV streaming service with a fixed monthly rate, no fees, and no contracts.

AT&T TV is a streamable version of DIRECTV, the satellite provider. It’s an option for people who don’t want the hassle of installing a satellite dish or relying on it to work perfectly during bad weather conditions.

AT&T TV offers more channels than AT&T TV NOW, and AT&T TV is half the price. But AT&T TV has a two-year contract and those second-year price hikes. (So it would essentially be the price of AT&T TV NOW during year two of your contract.)

If you plan on keeping AT&T TV NOW for two years or longer, it might be worth going for AT&T TV because at least you’ll be spending half the price for the same number of channels for your first year.