fuboTV might not have TBS or CNN starting in August, but it has over 50 sports channels we think you could get on board with.

Monthly price: $54.99–$84.99
Available channels: 95–160+
View Plans
https://www.reviews.org/tv-service/fubo-tv-review/
Find out if fuboTV is your next live TV streaming service as we go over the channel lineup, DVR, pricing, and package choices.
July 7, 2020

In the past, we’ve always thought of fuboTV as the sports streaming service. But in the past couple of years, fuboTV has made some changes to be perfect for sports fans and families.

fuboTV has the most sports channels than any other live TV streaming service, and its channel lineup includes channels for kids, entertainment, lifestyle, and news.

If you’re shopping for a new streaming service or looking to get rid of cable TV, you’re in the right place. We’ll go over all of the fuboTV details to find out if this is your next streaming service.

How much does fuboTV cost?

With fuboTV, you get loads of channels for a reasonable price

Let’s take the fubo Standard plan, for example. You get each channel for 54 cents! With YouTube TV and Hulu + Live TV, you’re paying about 75 cents per channel, and they are only in the 60–70 channel range.

But before you make the leap with fuboTV, jump down below to the channels section to see if this streaming service has the channel lineup you need.

The fubo Standard and fubo Family Deluxe have the same number of channels, but the $5 extra dollars for the family plan includes 500 hours of cloud DVR space, and you can stream on three devices at once.

But it’s also worth spending that extra $5 per month because the fubo Standard only includes 30 hours of Cloud DVR (definitely not enough), and you can only stream on two devices instead of one.

What is the Fútbol Trimestral package?
If your Abuelo only speaks Spanish, you can get 30 Spanish-speaking channels for $19.99 per month. This package includes Zona Fútbol, FOX Deportes, Univision, and beIN Sports en Español. Although it is $19.99 per month, fuboTV will bill you every three months (hence, the reason it is called trimestral). So prepare to see a bill of about $60 every third month.

Does fuboTV have a contract or fees?

fuboTV has no contract or hidden fees. (Thanks, fubo.)

Which channels does fuboTV have?

fuboTV has all of the sports channels you need, and you’ll also find lifestyle, kids, and news channels for the fam

The fubo Standard and Family Deluxe packages have 95 channels, while the Ultra package has a whopping 164. Those extra channels include more entertainment and sports channels, along with nine SHOWTIME channels.

So you have to decide for your family … could it be worth spending that extra money?

The fubo Standard and fubo Family Deluxe packages include the following channels:

We delve deeper into which sports channels each package has (because those are the most important), so scroll down just a little.

fuboTV has popular shows and movies for you and the family to watch whenever you’d like. So you don’t have to wait until it’s live on TV or until after you’ve recorded it.

You might like to watch Bob’s Burgers, Keeping Up with the Kardashians, or The Longest Yard, while the kids watch Spongebob Squarepants or PAW Patrol. 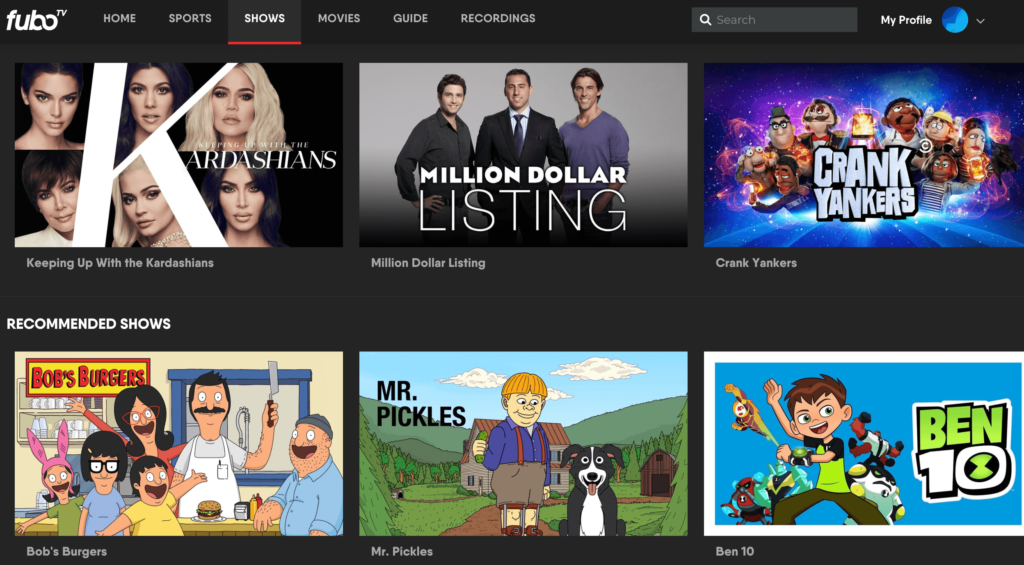 How much are fuboTV’s premium channels and add-ons?

We’re about to get into fuboTV’s biggest flaw.

fuboTV has only two premium channels.

But at least HBO and EPIX have their own app, so you’ll just have to get those channels separate from this live TV streaming service.

How much are fuboTV’s premium channels?

As for the add-ons … fuboTV has quite a bit to choose from.

How much are fuboTV’s add-ons?

Which sports channels does fuboTV have?

fuboTV will give you the most sports channels than any other live TV streaming service (or cable TV and satellite provider).

With fubo Standard and Family Deluxe, you’ll get close to 30 sports channels. And with fubo Ultra, you’ll get over 50. If you consider yourself a huge sports fan, this is the package for you.

But the one bummer about fuboTV: there are no ESPN channels currently. fuboTV has sparked a deal with Disney, and you’ll be seeing ESPN, ESPN2, and ESPN3 added to the lineups in August.

Sports channels included in the fubo Standard and fubo Family Deluxe plans are the following:

In the fubo Ultra plan, you get all of the sports channels above and the following:

Which devices are compatible with fuboTV?

You can watch the NBA game on your smartphone at the airport or your smart TV with the whole family. You can pretty much stream fuboTV on any updated device.

Here are a few to choose from:

We should also mention that fuboTV suggests you have at least a 20 Mbps internet connection for a clear and consistent stream. (Not sure what internet speed you have? Test it out with our tool.)

How much storage space does fuboTV’s DVR have?

The DVR could be subpar or great, depending on the plan you choose

To put it simply: if you get the fubo Standard package, you get 30 hours of Cloud DVR (we don’t know anyone who could survive off of this).

And if you get the fubo Family Deluxe or fubo Ultra plan, you’ll get the Cloud DVR Plus, which has 500 hours of storage (now that’s more like it).

So if you just pay an extra $5 per month for the Family Deluxe package, you’ll get a DVR that won’t limit how many soccer games, movies, and cooking shows you record.

How does fuboTV work?

fuboTV’s interface is smooth and easy to navigate.

When you first open up fuboTV, your Home tab shows you your recommended live TV channels, your recordings, and featured programs.

The Sports tab will show you featured sports shows and events, and some pretty good sports movies. You’ll also have handy buttons to take you to content for soccer, football, golf, racing, and other sports. 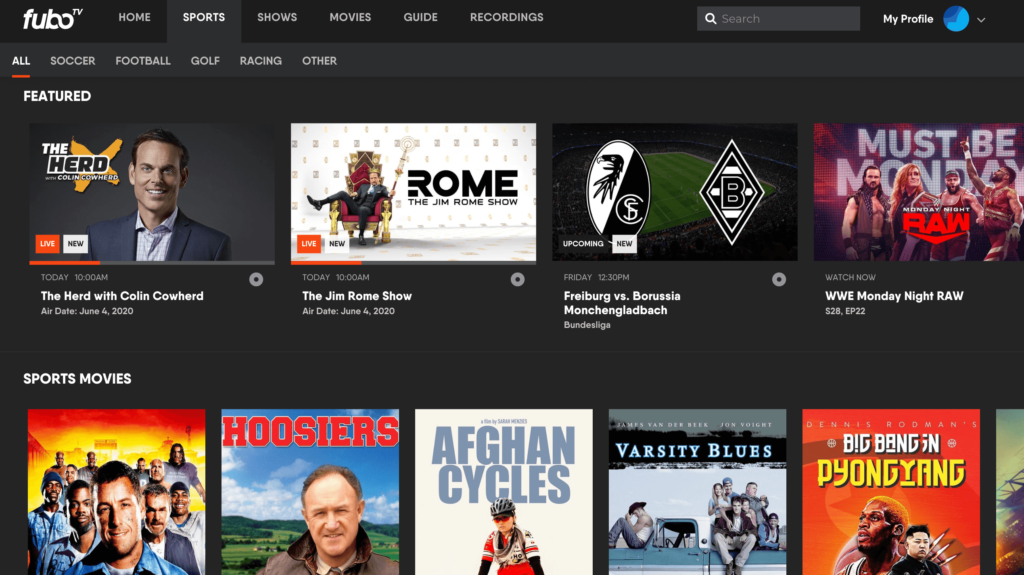 We like fuboTV’s guide. You can easily scroll left and right to see which shows are coming up and at what hour. There are easy buttons at the top to jump to Up Next, Tonight, and Tomorrow Night to help you plan what you’re going to watch during dinner. There’s a search bar to make it even easier to find your favorite late-night TV show and network.

And last but not least, when you hover over the show, there’s a convenient Record button. 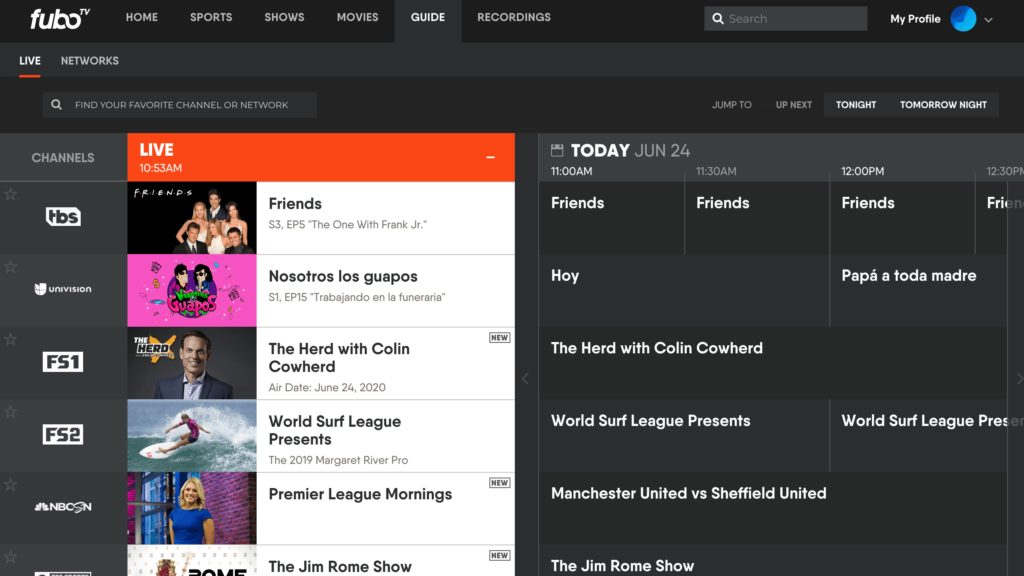 And when you go to your recordings, they’re organized from newer to older. And you get a search bar to find your show or movie easily! Now that’s a convenience you don’t see in most live TV streaming services.

Recap: Is fuboTV worth it?

It’s perfect for families who absolutely love sports and will enjoy a bunch of other popular channels, as well

If you answered yes to all of these questions, fuboTV is worth it for you.

These are the reasons why we recommend each of the three fuboTV plans:

If you’re still unsure if this is the live TV streaming service for you, we recommend checking out YouTube TV, Hulu + Live TV, or Sling TV. Our reviews cover everything you need to know, like channel lineups, DVR’s, and pricing.

Do you have fuboTV? What’s your experience with it been? Or do you like a different streaming service better? Drop us a comment below!

Is your house ready for fuboTV?

fuboTV requires a minimum download speed of 20 Mbps for a smooth stream. And if you and two other members of your family want to stream at the same time, that means you’ll be using 60 Mbps total.

So do you have the bandwidth to support your family’s streaming needs?

Which internet plan should I get?

Here are the internet plans we recommend to get the most out of your streaming services without clogging up your family’s whole network.

What are the best internet providers for streaming?
Data effective 11/19/18. Offers and availability vary by location and are subject to change.
* For the first 12 months. Some packages require a 1- or 2-year contract.
† For the first 12 months with a 1-year agreement.
‡ New customers only. Rate requires paperless billing and excludes taxes. Additional fees apply.
^ for 24 months with 2-year agreement. Actual speeds may vary. Installation, equipment fees, Internet Infrastructure Surcharge, early term, taxes & other fees apply. Services subject to availability and all applicable terms and conditions.

Which cell phone plan should I get?

Not only do you need a good internet connection, but you’ll also need enough data to support your streaming needs if you’re a cell phone streamer.

And who isn’t when it comes to passing the time during your lunch break, riding the train to work, or distracting your little ones while you’re grocery shopping?

We recommend an unlimited data plan for the family, so you never have to worry about limiting your binge-watching time on fuboTV. And we all know it could lead to a family crisis if someone uses more data than they were allowed.

What are the best unlimited cell phone plans?