Ultra-slim and beautifully designed, but you’ll pay for the privilege. 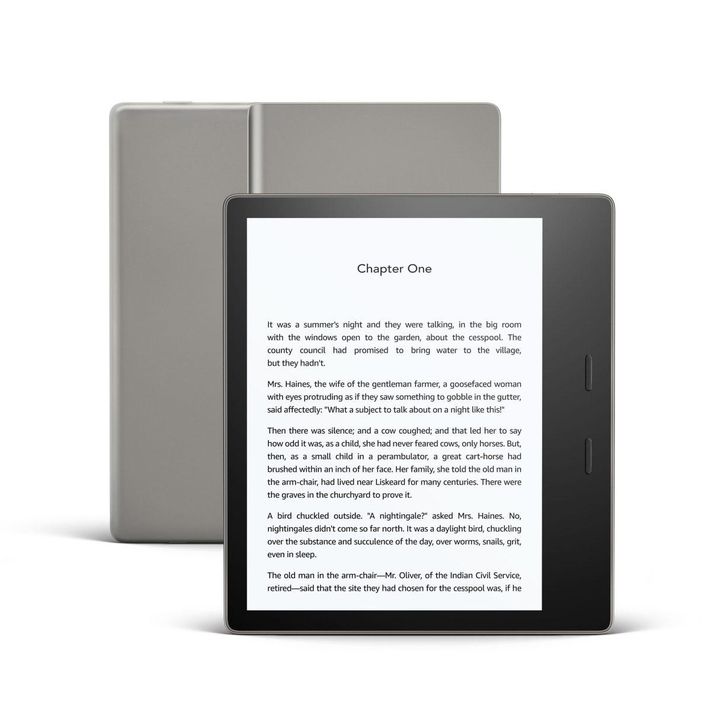 As Amazon’s top-of-the-line ereader, the Kindle Oasis is packed with impressive features and comes in a beautifully designed, ultra-slim aluminium body. It’s certainly not the cheapest ereader out there, and we would’ve loved to see a bigger screen, but overall, the Oasis will more than satisfy most bookworms.

Screen could be bigger

No audiobook or epub compatibility

Editor's Pick: The Kindle Oasis has been added to Reviews.org's guide to the best ereaders in Australia.

Ereaders are pretty unique in that you get essentially the same thing no matter how much money you spend. Whereas forking out an extra few hundred bucks on a smartphone will get you a better camera, faster processor, 5G access and a higher-definition screen, doing the same on an ereader will only get you minor upgrades. So, with this in mind, I was very interested to see what Amazon’s top-of-the-range Kindle Oasis actually had to offer and if it’s really worth more than double the price of its lower-spec siblings.

At first glance, the Kindle Oasis certainly had a premium look to it, with its flush bezels and aluminium backing. But just how does it compare to the competition?

If you’re eyeing the Kindle Oasis, the least amount of cash you’ll need to cough up is $399. It’s not cheap by any means, but given its Kobo counterpart (the Kobo Forma) comes in at $429.95, it’s to be expected.

However, notice I said the least amount you’ll need is $399 - maybe a little less if you can nab a deal. If you want more storage or access to ‘free’ 4G connectivity (‘free’ because you don’t need to pay a monthly SIM fee, but the upfront cost is a killer), you’ll have to dig a little deeper. For the 32GB model (which is more than anyone needs in an ereader, if we’re being completely honest), it’ll set you back $449. For 4G connectivity, that price goes up to $559. Ouch.

You have to give it to Amazon for this one - the Oasis is pretty expensive, but at least it has the looks to match. Measuring in at 159mm in length and 141mm in width, it’s still about as portable as its smaller, cheaper siblings, but it’s by far the slimmest at just 3.4mm deep (8.3mm at its widest point). Despite its ultra-thin form factor, however, the Oasis feels anything but fragile.

This is mostly thanks to its aluminium body, which feels solid and truly matches the expectations that come with its premium price tag. While it’s not necessarily as comfortable to hold as the traditional rubberised plastic backing found on other Kindles, there’s no denying it looks damn good. 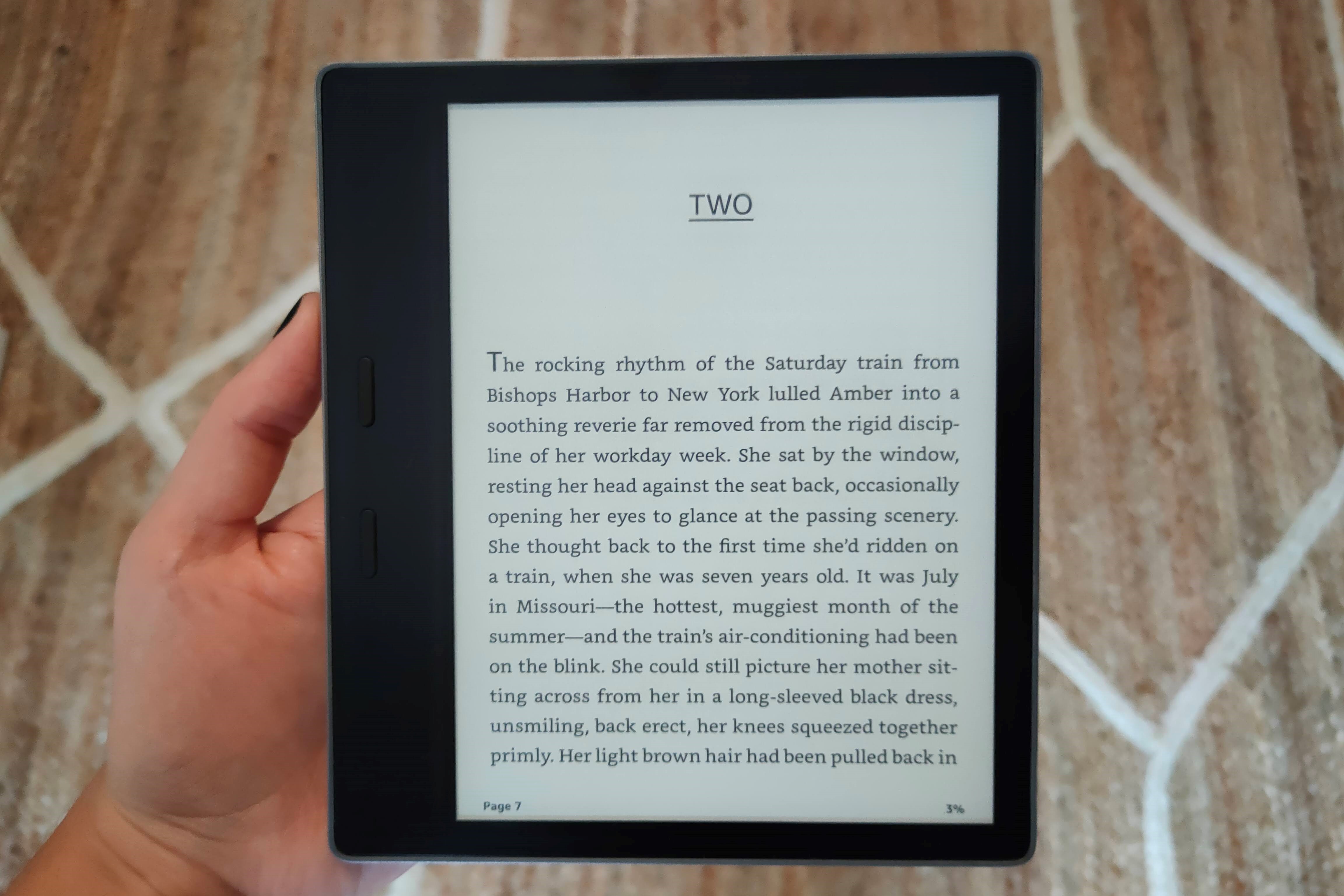 Around the front, you’ll find a single, flush glass screen and two page turn buttons with tiny bezels, but one wide enough to hold the device one hand without covering up whatever it is you’re reading.

Thankfully, it seems Amazon has learned from its mistakes with the Kindle Paperwhite and relocated the power button somewhere it’s far less likely to get pressed accidentally. Praise be.

I have literally zero complaints about the quality and features of the Kindle Oasis’ display. It’s crisp, clear, bright, is the only Kindle that offers adjustable warm light (to reduce eye strain) and the only ereader currently on the market with automatic brightness. Like other larger readers, you can also change the orientation of the display, from portrait to landscape mode, depending on how you're holding your Oasis. It’s all good, and it makes for a delightful reading experience.

That said, while the 7-inch e-ink display was plenty big enough for me, it may be a sticking point for some. The Oasis’ main Kobo competitor, the Forma, boasts a generous 8-inch screen - the largest on the market. Sure, it’s an extra $30.95, but for some the extra reading space may just be worth it.

Like its cheaper sibling, the Kindle Paperwhite, the Oasis does not include support for audiobook playback despite this being a key feature in overseas models. If no Kindles whatsoever could support Audible playback, I wouldn’t have a gripe with this. However, the fact that it’s available on US and UK models makes it a really unfortunate omission and could alienate Aussie Audible subscribers.

There’s also a compromise or two to be had for those who prefer to consume words visually rather than aurally. As we’ve mentioned previously, the Kindle Store is incredibly well-stocked and generally quite reasonably priced. However, it also happens to be Kindle users’ only real option for buying books, as Kindles favour .mobi files and Amazon’s proprietary .azw file type over the more popular .epub. They also don’t support Adobe DRM-protected content, meaning you can’t read borrowed ebooks from your local library on your Kindle.

On the plus side, the Kindle Oasis (and all Kindles, for that matter) does have one major benefit that Kobo simply doesn’t offer - a subscription ebook service. For $13.99 per month, Kindle Unlimited grants you access to over a million titles, including classics and bestsellers. You’ll struggle to find new releases, but it’s still a pretty compelling deal.

The Kindle Oasis is not only the most feature-rich Kindle ereader, but perhaps the most feature-rich of all the ereaders currently available. It boasts a beautiful, bright screen with 25 LEDs, page-turn buttons for easy single-handed reading, a waterproof aluminium body, adjustable warm light and automatic brightness. Here’s how it compares to the other Kindle models.

Between the Kindle Oasis, Kobo Libra H2O and Kobo Forma, there’s not a whole lot to separate them apart from screen size and auto-brightness. It’s all about deciding which features are most important to you and simply choosing the one that best meets your needs.

Yes, if you’re an Amazon devotee.

If you’re entering the ereader market as an Amazon Prime or Kindle Unlimited subscriber and only want the best of the best, the Kindle Oasis is for you. It looks beautiful, feels utterly premium and is by far the most feature-packed Kindle. However, if you’re open to other avenues and want to save a bit of cash, we’d recommend the far cheaper but still incredible Kobo Libra H2O over the Oasis.