It's big, powerful and has a stylus. Samsung's Galaxy Note9 is still the big Android phone to beat. 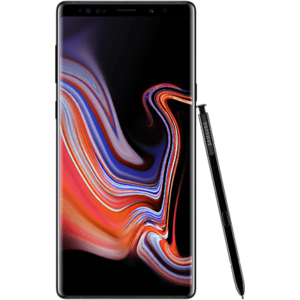 Is the Samsung Galaxy Note 9 any good?

Samsung's Galaxy Note series of smartphones has always revolved around two key features: a big screen (one of the largest you'll find on any smartphone) with class-leading detail and colour, and Samsung's inimitable S-Pen stylus. The Samsung Galaxy Note 9 improves on both those features since the previous generation Galaxy Note 8, with one of the most colour-accurate and brightest displays of any smartphone you can buy and a Bluetooth-enabled S Pen that can act as a remote control during your small-screen movie viewing.

It comes at a significant cost, but the Galaxy Note 9 is one of the most well-rounded smartphones that you can purchase in 2019. As a complete package you get yourself a very well built device with a great display and stylus, plenty of processing power and RAM, a big battery that lasts through prolonged heavy use, and all the flagship bells and whistles like water resistance and Qi wireless charging.

Who should buy the Samsung Galaxy Note 9?

The $1499 Samsung Galaxy Note 9 is essentially a slightly larger, slightly brighter and more vibrant, slightly more powerful evolution of the previous Galaxy Note 8, also bringing in the same improved software features and the evolved dual-lens camera setup of the Galaxy S9 Plus. It's still one of the best phone cameras on the market, though it's starting to be eclipsed by the more modern 5x camera setups of phones like the Huawei P30 Pro.

Built around a 6.4-inch Infinity display with Samsung's hallmark curved edges, the Galaxy Note 9 is quite a large phone, measuring 161.9mm tall and 76.4mm wide. Without a case it's still a very skinny handset at just 8.8mm but at 205g it's a little heavier than the circa-150g weight of the average iPhone or Samsung. You can buy it in a variety of colours, but all come with a S-Pen stylus hidden away in the body, which can be used for writing digital notes on the Note 9's display - hence the name.

Samsung's theme on top of Android - which used to be the much-maligned TouchWiz, but has now been succeeded by the much cleaner and more user-friendly One UI - is relatively clean and straightforward, though it doesn't rival the speed and streamlined nature of stock Android on a Google Pixel handset. One UI is big on suggestions and value-added information, telling you more about where you are and what's on around you. The Note 9 is also another Samsung smartphone to feature the Bixby voice assistant with a dedicated button on the phone's side - put simply, it's not our virtual assistant of choice, falling far behind the Google Assistant (which can also be enabled on the Note 9).

In essence, while the Galaxy Note 9 can handle just about any tasks that you throw at it, its party piece is its big, beautiful, notch-free AMOLED display. When it was launched, it was touted as the most colour-accurate and detailed smartphone display that you could drop your hard-earned dollars on, and this remains true today. If you're watching or streaming any high-quality video, the Note 9 is your one best choice for viewing it. The lack of a notch cutting into the usable display area while watching a widescreen video in landscape mode is just the cherry on top - in all environments the Galaxy Note 9 has a bright, colourful and accurate screen.

If a fast and powerful phone with a big screen sounds like the kind of device you're looking for, and if your budget can stretch far enough to suit its $1499 asking price, the Samsung Galaxy Note 9 is the phone for you. It's somewhat of a jack of all trades, and has many features and tweaks that no other phone consolidates into one device - its big screen doesn't have a notch cut into the top of the display, for example, and of course you get that S-Pen stylus built into the body of the Note 9 as well.

You can grab the Samsung Galaxy Note 9 on all three of the major telcos - Telstra, Optus and Vodafone. Both Telstra and Vodafone offer their plans with no lock in contracts, while Optus has a suite of entertainment extras such as English Premier League streaming that comes with its plans.

What can I do with the Samsung Galaxy Note 9?

In a word, everything. As Samsung's flagship smartphone for the second half of each year, the Galaxy Note inherits all the most important innovations of Samsung's Galaxy S series from the first half of each year and improves on them further with new features and extra goodies. If there's a feature that your existing phone can do, chances are that the Galaxy Note 9 can too. And, for those stalwarts, the Note 9 also still retains the 3.5mm headphone jack missing from most flagship phones in 2019.

Compared to a regular Samsung flagship from the Galaxy S series, the hallmark of the Galaxy Note 9 is definitely its S-Pen stylus. New in 2019 is Bluetooth support that means you can take the stylus further from your phone and use it as a remote control - a nifty feature if you're binging YouTube or Netflix in bed, but it's not much use besides that. You can use the stylus as a timed trigger for photos, too, which makes a posed selfie easier if you're on your own.

The S-Pen enables some quirky functionality that you might absolutely love about the Galaxy Note 9, or that might fall completely flat. You can easily screenshot and annotate your image with handwritten notes or drawings, which is very handy for visual thinkers or for sharing feedback on designs. You can also use the S-Pen to select and record short videos of what's happening on screen, creating short GIFs that can easily be shared.

And all of this comes without a huge cost to battery life. Because the Samsung Galaxy Note 9 is a physically large phone, it has a 4000mAh battery cell hidden away inside with room for the S-Pen stylus to spare. It easily eclipses the 'all-day' battery life test with room to spare; you might find yourself running short half-way through a second day, but if you set the phone up with Samsung's included battery optimisation software you can stretch usage easily to two full days of moderate usage.

What could be improved with Samsung's Galaxy Note 9?

As a top of the line flagship phone, there are very few things that are objectively bad about the Galaxy Note 9. The only real caveat with this phone is that it's expensive at its $1499 starting price, which rises further if you want 512GB of onboard storage - not really worth it since you can add more storage with a microSD cared after purchasing the base 128GB variant.

As software goes, you might not like the One UI skin that Samsung bundles on top of stock Android, and this can't easily be removed. The same is true of the Bixby voice assistant - it's not particularly useful, especially in comparison to the Google Assistant that Samsung has obfuscated in the Note 9's settings to make Bixby more prominent. You can download an app to turn the dedicated Bixby button to a more useful purpose like toggling the phone's silent and vibrate modes - which comes in handy far more often than Bixby does.