What compromises do you make when you take home a “non-Pro” device? 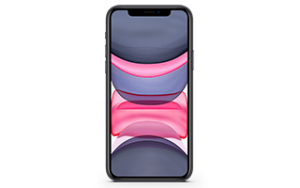 There are a few notable omissions when you choose the cheaper iPhone 11 over a Pro model but they're not exactly deal breakers. The iPhone 11 is more than capable of holding its own.

Let’s take a trip back in the old Reviews.org time machine back to 2019 when Apple put out three new phones in the iPhone 11, 11 Pro, and 11 Pro Max. For those who didn’t want to spend over $1,000 on their smartphone, the iPhone 11 was the obvious choice. But what compromises do you make when you take home a non-Pro device?

While there are a few notable omissions if you opt for the iPhone 11 over the Pro or Pro Max, they're not exactly deal-breakers. The iPhone 11 has one less camera than its big siblings, but it still takes some incredible shots. The screen isn't OLED, but most users won't be able to tell the difference anyway. And, unlike previous iPhone generations, upgrading to a Pro model doesn't necessarily mean hours of extra battery life - the iPhone 11 is more than capable of holding its own.

Below you will find some popular iPhone 11 deals. But for our editorial picks, head over to our best iPhone 11 plans page.

Hey, if anything in this video helps you about the iPhone 11 or any of our videos for that matter, please hit that like and subscribe. Get the notifications when we drop our next video.

Which iPhone 11 is the biggest size?

So does size really matter in this lineup? Not really.

On the Pro models, you’re going to get OLED screens, which have a broader range of colour reproduction and darker blacks than the LCD that you get with the iPhone 11. Here they are side-by-side with the same 4K UHD wallpaper. Can you tell of the difference beyond size? 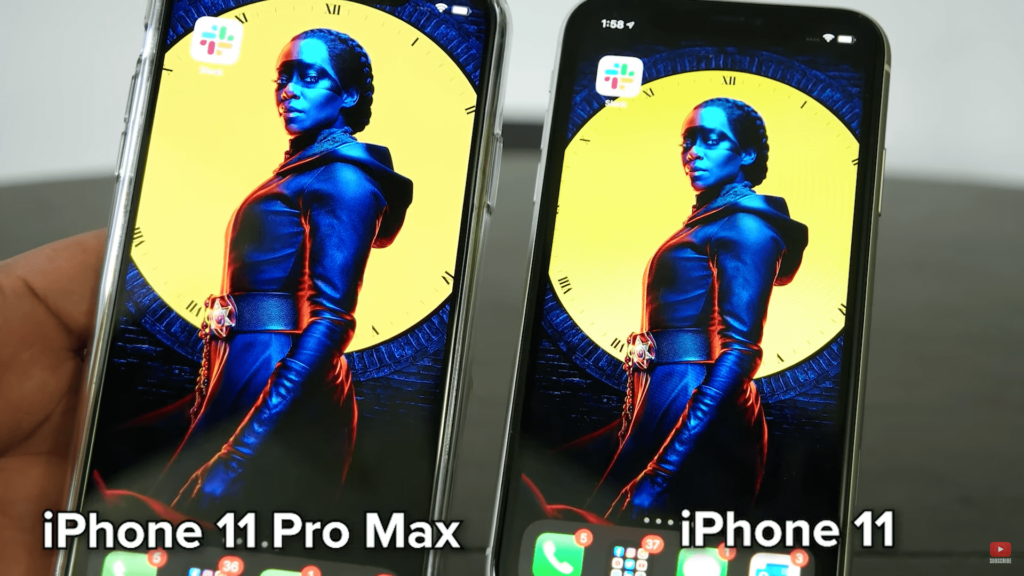 What do you get for that difference in size?

For their size, all three phones have the same front-facing cameras, they all have Apple’s TrueDepth camera, with Face ID, which now has slofie capability.

Slofie is a front-facing camera video that records at 120 frames per second, giving you this GIF-like, slow-mo video option.

Bask in the ambience of my glorious beard slofie.

Ahem, back to it.

Is the iPhone 11 camera good?

The back of the phone is where the magic happens. Unlike the 11 Pro models, the iPhone 11 has only two camera lenses, but I don’t think that you’re gonna miss out on not having that telephoto lens for taking great close up photos.

The iPhone 11 gives you a 12-megapixel wide-angle lens with optical image stabilization and a 12-megapixel ultra-wide-angle lens that has a 120-degree field of view. The first lens is gonna give you better low light shots than the ultra-wide lens, but the next time you’re at a party or a family function, you’ll be able to get all your pals into the shot without having to back up 30 feet.

And Apple’s made it easy to do by opening the Camera app and simply clicking where it says 1x on the screen to toggle between the two lenses. When you see .5, you’re looking at the ultra-wide-angle lens.

How does Night Mode work?

New this cycle, across all cameras, is Night Mode. It uses software to take pictures in low light conditions which actually look very good. For example, here’s a photo from my older work phone, which is an iPhone 8, versus the iPhone 11 in Night Mode. 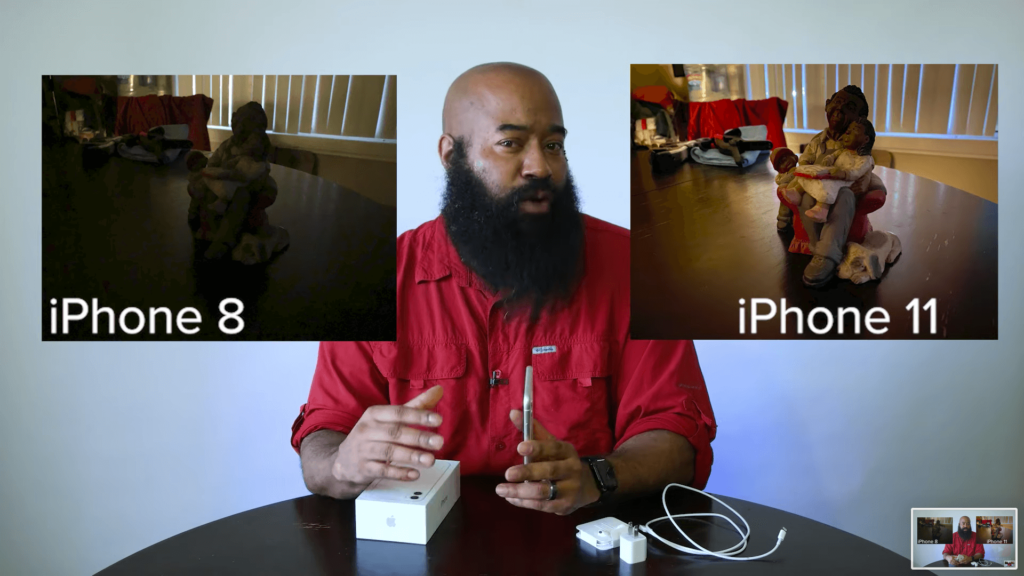 As you can see with the iPhone 8, the picture is unusable. But with Night mode on the iPhone 11, you can make out detail in the image, and this is an extreme example. I was almost completely in the dark. With Night mode, you have one more tool to help you capture those random candid moments you want to remember forever.

In terms of video, you’ll get a shooter that records 4K video at up to 60 frames per second with an audio zoom function, which actually focuses the microphone on whatever or whomever you’re zooming into.

QuickTake also allows you, when in Photo mode, to take a video by holding down the shutter and sliding the lock icon to the right. And boom, you’ve gone from taking a photo to recording live-action for posterity.

How long does the iPhone 11 battery last?

Now, the week I reviewed the phone was actually somewhat quiet for me in terms of use, but at the end of the night, I’m seeing 25% left with six hours screen on time. Your usage may vary in battery life vary accordingly, but I can tell you that you’re definitely gonna experience solid use between charges out of the iPhone 11.

If you’re a superuser and are stuck to a battery bank because you talk on the phone a lot, your best bet is generally going to be the Pro Max, the 11 Pro Max. But if you’re the kind of user who will still need a battery bank even with that phone, then you may consider that the larger phone may not get you more gains in the long run for the cost.

What really makes the iPhone the phone it is though, is the ecosystem.

You really can’t talk about it without talking about iOS, and though the interwebs have levelled well-deserved complaints at 2019’s iOS, and the fact that Apple has released a few updates to correct bugs and various issues in a very short span of time, iOS is still one of the most complete and frictionless ecosystems on the marketplace, in my opinion.

Control Center is more customizable than ever and shows you more information than ever. You get to that additional information sans-3D touch, which is gone. And in its place is haptic touch. With haptic touch, you’ll actually get access to the Peek and Pop menus from 3D touch days, but this time by long-pressing the screen. You’ll feel a subtle vibration when you do, and then be presented with contextual menus for icons, and options in Control Center.

We can do a whole review just on what all is packed in iOS 13, but some of my favourite features are built-in screen recording, which was actually added in iOS 12.

Dark mode is my jam and makes smartphoning much easier on the eyes. (Yes, I just turned smartphone into a verb.)

And I actually use the Reminders app now. It was redesigned, and the layout is clear, easy to navigate, and effective for me.

Add to that the Siri integration, and it really becomes a productivity tool built right into the operating system that keeps me on task, and from forgetting things I need to pick up from the grocery store. I love the location-aware reminders that I can set just like this:

[Tshaka] “Remind me next time I’m at Trader Joe’s to pick up blueberries.”

Now the next time I arrive at that particular Trader Joe’s, I’ll get a pop-up message on my phone or my Apple Watch, reminding me to pick up those blueberries, without me having to do anything.

The other addition to iOS, which showed up with iOS 12, was the Files app. Now I have much more control over accessing files on my iPhone.

This was actually one of the biggest issues for me as a content creator. I use my phone quite often to mark up files, send files to clients, or download and view content, and not having access to files like I was used to on a computer, and on an Android phone, was one of the things which kept me off of iPhones or iOS for the longest. Problem solved.

Photo and video editing in iOS

Speaking of content creation, the fact that you can also now edit photos and videos, right from the Photo Gallery app in iOS, is a big deal. I can colour correct video, touch up photos, all without having to jump into a third-party app.

This is perfect for quick items which are for proofing and approvals. Anything more than that and you’re still gonna wanna use your favourite photo editor, or video editor, but for quick things, iOS and the iPhone 11 are great.

I’m not the type of guy to tell you what to buy, but it really comes down to this when you’re looking at the iPhone 11:

Are those differences enough to get you to spend a few hundred dollars more for the Pro version? I don’t know, maybe it is. Let us know in the comments below.

And it seems consumers have let Apple know, as a little side note, the holiday numbers have come in from some analysts, and the iPhone 11 actually accounted for something like 37% of total iPhone sales. Do with that what you will.