Raya and the Last Dragon arrives on Disney Plus 5 March

It will be available as a Premier Access title for $34.99.

What is Raya and the Last Dragon?

Raya and the Last Dragon is the latest animated flick from Disney, following this year’s Pixar hit Soul. It’s a fantasy adventure set in the world of Kumandra, a magical land where dragons and humans once lived together and everything was super chill. That was until the dragons sacrificed themselves to an ancient evil force in order to save their human allies. Now, 500 years later, evil has returned to Kumandra, and it’s up to a lone wolf known as Raya to track down and recruit the last living dragon.

The news of Raya and the Last Dragon’s Premier Access release comes hot off the heels of the movie’s latest trailer release during this year’s Super Bowl (which featured a ton of other new movie trailers). 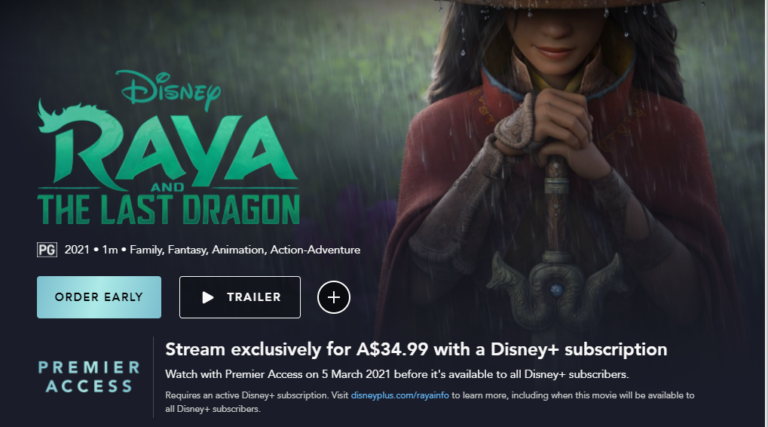 Disney Plus Premier Access is an early-release program for select Disney movies that would otherwise be shown in cinemas. Disney charges an additional $34.99 for a “long-term” purchase of the title. You also need to be subscribed to Disney Plus ($11.99 per month from 23/2/2020) to access the title, bringing the total cost of a Premier Access title to $46.98.

Whether it’s worth waiting or not all depends on how desperate you are to watch the latest Disney movies (we’ve got some recommendations on what you can watch in the meantime).