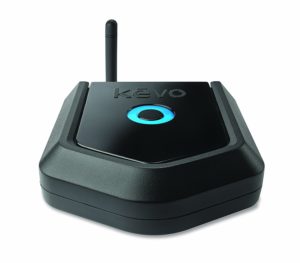 Overall Rating 3.5 out of 5
Extra safety options
Pick-resistant
Locks sold seperate from Hub
View on Amazon
https://www.reviews.org/home-security/kevo-plus-lock-review/
We reveal all Kevo Plus features, pricing, and failures in our in-depth review.
January 31, 2018

Kyle Lemmon
Managing Editor
See all articles
Jan 31, 2018
Kevo is a system that can turn your smart phone into an eKey. An eKey is a key that can lock and unlock doors remotely. It’s kind of like a secret password system where only your door and your phone know the secret word.

Beyond just locking and unlocking, you can also share eKeys with other people. No more keys under the mat, no more keys passed out to workers, and no more changing the locks if someone has a key that really shouldn’t. With Kevo (available on Amazon), you can add users, delete users, or even grant temporary access to users.

Until now, Kevo has been limited by its range but the recent announcement of Kevo Plus means one thing: true remote locking and unlocking with the Kevo Gateway.[/vc_column_text]

How does Kevo work? 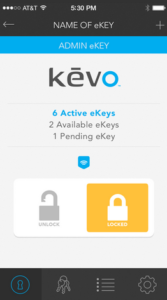 Kevo works off of a technology called Bluetooth Low Energy™ 4.0 Smart technology. Not all smartphones have this technology—only iPhone 4S and newer. It also works with the iPod third generation or higher, the iPad, and the iPad mini.

And for Android, Kevo is working on an Android Beta that works with the Google flagship phone the Nexus 6 and the Nexus 9 tablet. If you have a compatible smart phone you simply set up the Kevo system, and download the free mobile app.

As not everyone has a Bluetooth LE smartphone device, Kevo includes one key fob with the purchase of a deadbolt. Additional key fobs sell for about $25.

So far, Kevo probably sounds a lot like any standard smart lock—but Kevo is revolutionary. What sets Kevo apart from others is their touchless unlock feature. Once you download the Kevo app, the app constantly runs in the background, and once you’re in range, the app can unlock your door automatically.

Here’s a scenario for other smart locks: You get to your door, find your phone, unlock the screen, type in your password, open the app, navigate to the lock screen, click unlock. But with Kevo, there is no need to open your app just to unlock your door. You simply approach the door and it unlocks. Kevo is truly automated.

And one for you

With Kevo, you can also create different types of keys. The primary account is called the Owner Account. The Owner can add people, delete people, check event history, and receive notifications. They are masters of all eKeys. Secondary to the owner is the Admin. The Admin can do everything that an Owner can do but they cannot delete the Owner.

Owners and Admins can create different types of shared keys. They can create Guest Passes that gives your house guests access for 24 hours. Having a party? You can send eKeys to as many guests as you like as you can send unlimited Guest Passes at no charge.

If you don’t want someone to have access for 24 hours, you might want to use a scheduled key. Scheduled keys allow you to grant a shorter access.

For example, you could give your house cleaner access every Monday from 8am until noon. Each Kevo system comes with two eKeys, but you can add as many eKeys as you like for $1.99 per key. At first we were disappointed at the “upcharge,” but really this isn’t any more expensive than buying a physical house-key at Lowes. You don’t get free house-keys and you don’t get free eKeys (unless they’re Guest eKeys, since those are free).

What’s new with the Kevo Plus 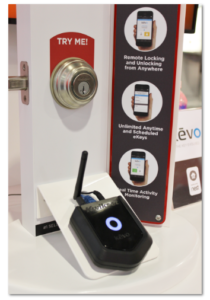 Kevo Plus, which launched in 2015, enables remote locking and unlocking through the Kevo Gateway. While the basic Kevo system can remotely unlock and lock your doors within Bluetooth range, Kevo Plus can lock and unlock your doors from anywhere.

Kevo Plus is a service that will work with existing Kevo accounts. Users sign up for a 12-month subscription, which comes with a free Bluetooth-enabled Gateway. The Gateway will “talk” to your phone wirelessly and you can send commands to the Gateway from anywhere in the world.

The Gateway does require internet and power to work but even if the Gateway loses connection, your normal Bluetooth features will continue to function.

Another big change for Kevo is integration with the Nest Thermostat—and this change is ready right now. Kevo works with Nest with a specific functionality called “modes.” For example, Kevo can tell Nest that you are gone and Nest will swap to Away Mode by adjusting your home’s temperature to something more energy-friendly. When you get home, Kevo can tell Nest to swap to Home Mode and Nest will readjust the temperature to something more comfortable for you.

Most burglars don’t use forced entry, so by simply having a lock and actually locking the lock, you’ve taken a great step toward home safety. With that said, there are good locks and there are bad locks, and the Kevo is a pretty good lock. The Kevo lock is an ANSI Grade 2 (for homes, Grade 1 is the best and 2 is still good). Beyond that, Kevo has included some safety features for added security.

First of all, the system is smart enough to know if you are inside your home or outside so it will not automatically unlock as you approach the front door from the inside.

Second, users have the option to secure the Kevo app with a 4-digit passcode.

Third, Kevo uses SmartKey® Re-Key Technology. Be aware, there are videos on the internet that show how easy it can be to pick Smart Keys. However:

Fourth, Kevo is said to be “Pick-Resistant,” meaning that it has withstood the highest level of the UL pick testing, the UL 437, Par. 11.6.

Confused after point three? We don’t blame you—it’s hard to know who to believe. Kevo’s parent company, Kwikset, felt so confident in their locking system that they hosted a lock-picking competition for professional locksmiths at the Associated Locksmiths of America (ALOA) Convention in Orlando, Florida.

According to a press release,

The results of the lock-picking competition at ALOA demonstrated that out of the 56 SmartKey deadbolts that locksmiths attempted to pick, only one lock was successfully picked, at a time of eight minutes and 16 seconds. Of the 56 Schlage® SecureKey™ deadbolts that locksmiths attempted to pick, 44 were successfully picked, one in as fast as 7.16 seconds.

So, take that as you will.

The biggest limitation with Kevo is its potential lack of compatibility. If your smartphone doesn’t have Bluetooth Low Energy™ 4.0, then Kevo won’t work with it. We would also like to see the lock integrate with more things beyond Nest. However, integration with Nest and the ability to control the lock from anywhere shows progress in the right direction.

The Kevo Plus launched in the spring of 2015, and you can buy Kevo from Amazon now in Brass, Nickle, or Bronze for around $200.

How Does Kevo Work?
What's New with the Kevo Plus
Is Kevo Safe?
Final Thoughts