If you want a ton of channels for a low price, AT&T might be right for you—just watch out for those pesky additional fees.

AT&T’s fiber-optic and cable TV service, AT&T U-verse, has high channel counts for a cheap price—it stacks up well against AT&T’s other product, DIRECTV. However, you won’t be super stoked on the additional fees for equipment, HD service, and more (which we’ll talk about later).

AT&T U-verse pricing and packages
* /mo. for 12 mos plus taxes

All things considered, AT&T U-verse is a solid TV service worthy of competing even with DIRECTV.

AT&T’s pricing is on par with providers like DIRECTV, but its first-year pricing is cheaper than DISH (compare DISH and DIRECTV here). Keep in mind, after your first year, your advertised prices will go up to regular prices unless you call to renegotiate terms. You could potentially switch to DIRECTV, then back to U-verse, but just watch out for early termination fees.

What does the price include?

You’ll get an included HD DVR, three months of premium channels, and installation on all packages except U-Basic.

Here’s what you’ll have to pay extra for:

The channel counts are high and the pricing is low, even compared to DIRECTV. But keep in mind that a high channel count doesn’t mean much if you’re not getting the channels you want, so make sure to check the channel lineups.

AT&T U-verse has a pretty good promotion for premiums like HBO. After signing your one-year contract, you’ll get three months of HBO and CINEMAX at no additional cost. Beyond that, pricing is pretty standard at $26 per month for both.

If you just need HBO, we’d recommend getting the standalone HBO NOW streaming service for $15 a month.

AT&T doesn’t drop the ball when it comes to getting the sports you want.

Major league and college games are covered by the following networks:

AT&T’s U-verse does not have NFL SUNDAY TICKET, unlike DIRECTV. DIRECTV is the exclusive provider of NFLST, and we imagine that fact will steer the die-hard football fans back over to the satellite provider.

AT&T U-verse’s Total Home DVR isn’t as nice as DIRECTV’s Genie or DISH’s Hopper, but it will do the job for most people. You can watch and record up to four shows in your house (as long as your TVs have U-Verse receivers), which is way better than buying four HD DVRs. 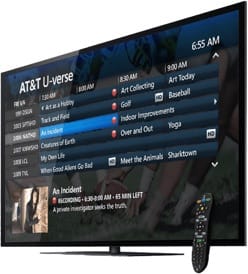 The higher-tier packages from AT&T include higher-capacity DVRs. These wireless receivers provide up to 460 hours of standard-definition content and 165 hours of high-definition content. While we’re not math wizards, we’re pretty sure that means you can watch about 165 episodes of 60 Minutes in HD.

The lower-tier packages may get DVRs with storage closer to 37 HD hours and 155 SD hours, which means you can watch only 37 episodes of 60 Minutes in HD—which may be more than enough Andy Rooney for some people.

Sorry, you can’t experience the glory of Westworld or feel the flash of Dancing with the Stars in 4K resolution with AT&T. The highest resolution available from AT&T U-verse is 1080i or 720p. We look forward to the day when 4K is available from all cable providers, but it doesn’t look like it’s happening anytime soon.

You may not really be able to notice in the world of TV, but AT&T U-verse uses both fiber and fiber-and-coaxial hybrid connections. Simply put, it’s more reliable and should leave your viewing experience relatively glitch-free, so you’ll be able to tell exactly how many cherry tomatoes the Chopped chefs used in their dishes.

The AT&T U-verse mobile app is useful because it converts your smart device (phone, tablet, etc.) into a remote control.

If you’re an AT&T wireless customer, you’re in luck: you can also stream live TV and on-demand shows directly to your device without using mobile data. AT&T’s wireless data gets throttled after 22 GB on unlimited plans.

Scheduling your DVR on the go may save you from missing your favorite show if you forgot to set the DVR at home. It’s also a great way to stave off boredom in the bank line.

AT&T U-verse TV customer service can be reached Monday through Friday from 8 a.m. to 7 p.m. local time, and Saturdays 8 a.m. through 5 p.m. local time. Technical support is available 24/7, so you won’t be left high and dry if your signal goes out.

If you’d rather chat online, AT&T offers chat, and we’ve had positive experiences with it before. However, recently we tried to get a question answered without providing our personal information, and instead of saying they absolutely required that information, they closed the chat. We prefer a willingness to help over a willingness to sell every time.

If you’re after high channel counts, then U-verse has some of the highest we’ve seen. You’ll get an HD wireless receiver included with your price, but you’ll have to pay an extra $7 per month for HD service. The Total Home DVR has four streams and plenty of storage—we think average-sized families will be covered just fine.

Other than that, AT&T U-verse doesn’t stand out as either particularly amazing or particularly terrible, so while some may opt for DIRECTV if they’re bundling TV and internet, AT&T U-verse is a great cable service for those who want high channel counts at a reasonable price.

At Reviews.org, our research isn’t complete without digging into the fine print. A lot of companies tuck in extra fees on your monthly bill, and AT&T is no exception. We consider anything that isn’t included in the advertised price a “hidden fee,” even if it’s listed—because we believe most users don’t notice these additional costs.

Otherwise, professional installation can cost up to $99. This is waived with most TV packages from what we can tell, except the UBasic package, which isn’t offered in our area.

Self-installation is free—unless you need assistance, and then the full $99 applies. Note to self-installers: Either don’t fail, or else try, try again.

You’re going to pay $7 per month for HD, and it isn’t available on U-Basic or U-Family plans, which is a real bummer for us. No one with a bigger TV (or a small device, for that matter) wants to watch standard definition when high definition is available, so we venture a guess most people feel stuck with this fee.

Monthly equipment fees for HD DVR are included with most U-verse packages, just not the U-Basic (sorry for all you basic people out there).

Your first wireless HD receiver is included with your price. You can add up to two additional wireless receivers (for three total) to your home. These wireless receivers have a $49 one-time fee attached to each of them, in addition to the monthly fee.

Each additional receiver adds $10 per month to your bill, wired or not, so big families may have to dish out a little extra cash to make sure the kids can watch their own shows.

You’ll pay an extra $7.99 per month with AT&T, which is pretty standard for the industry. We think broadcast fees are unnecessary—but unfortunately, most cable companies, including AT&T, think they’re a good way to recoup costs from purchasing access to the big networks like NBC, CBS, and ABC.

It’s not enough to pay for the monthly service—you gotta pay to get started with it, too. You’ll pay AT&T a one-time activation fee of $35 for U-verse TV, which is not our favorite thing in the world. (Activation fee—more like WACK-tivation fee, right?)

You’re signing at least a 1-year contract, so make sure you’re committed fully. Otherwise, you’ll be charged $15 per month remaining on your contract just to drop the service.

You may run into smaller additional fees from federal, state, or city governments, but these are so location-dependent that it’s hard for us to say what yours will look like. In our experience, these fees usually won’t be more than $5 per month.