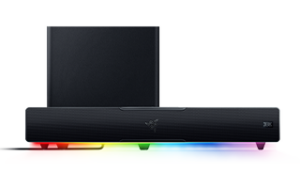 By Nathan Lawrence
Editor-at-large
Read More
6 min read
Share Article
Quick verdict: Razer Leviathan V2 PC Soundbar
As a PC soundbar, the Razer Leviathan V2 is built to slot under your main monitor. You don’t need to install Razer Synapse software to get great out-of-the-box sound out of the Leviathan V2, either (but you still should install it for tweaks). While the bass is lacking some bone-rattling oomph, this Razer soundbar pumps out high-quality, well-balanced audio that’s complemented by high-fidelity sources. It’d be great to have more connectivity options, particularly for those who like converting PC speakers into backup tele speakers, but the Leviathan V2 still does a great job for its primary PC-centric function.
Pros
Well-balanced sound
Easily slots under a monitor
Incredibly handy source-switch button
Cons
Sub could have more oomph
Missing connectivity options
Limited Razer Synapse tweaking

While you still can if you’re saving bucks, it’s not really the best idea to rely on tinny monitor sound for PC audio these days. You basically need some solid speakers (like the Razer Nommo Pro) or a decent set of headphones to properly immerse yourself in the all-important audio aspect of PC gaming, multiplayer audio and music streaming. I’m a fan of combining speakers and headsets in my everyday computing, and I honestly didn’t know how much I’d appreciate a PC soundbar until Razer sent me the Leviathan V2 to review. 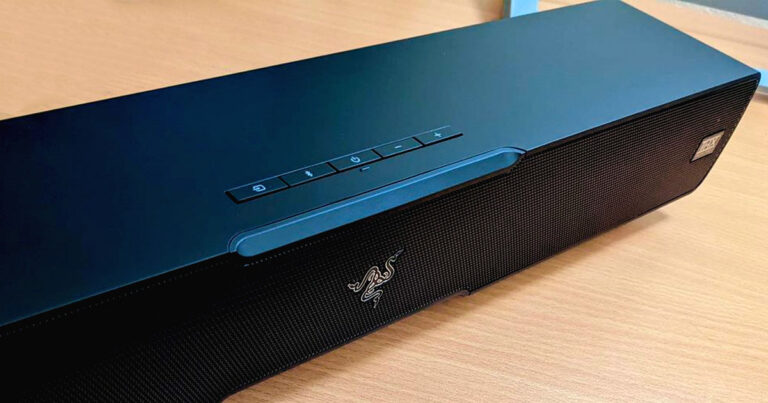 Not cheap but still reasonably priced in terms of the competition.

Razer is a premium-priced brand, so it should come as no surprise that the Razer Leviathan V2 isn’t cheap. The Leviathan V2 retails for $409.95 in Australia but you should be able to source it for around $100 cheaper, which helps up the value.

It’s less that the Leviathan V2 is peerless and more that there aren’t many PC-only soundbars out there. The Creative Sound Blaster Katana V2 retails for $499.95, which makes the Leviathan V2 cheaper, but Creative is renowned for audio while Razer is more multifaceted when it comes to peripherals. Because of this, it’s more practical to compare with PC speakers, and I absolutely prefer the sound and space-saving of the Leviathan V2 to my current 2.1 PC configuration for the Logitech Z906.

Deals and pricing only accurate as of last page update.

Plug and play (your favourite tracks). 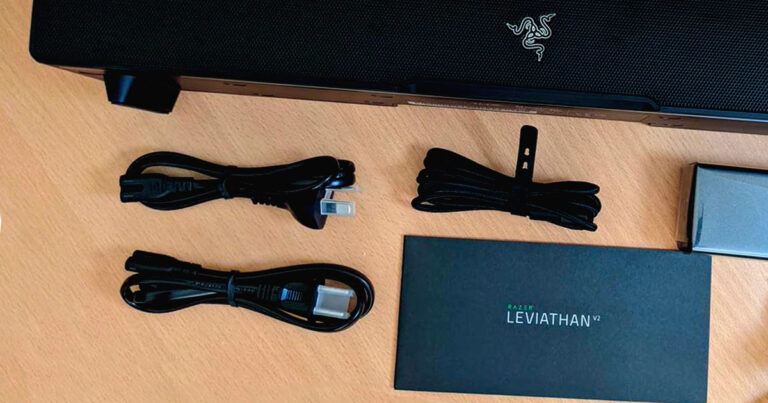 The Razer Leviathan V2 is a cinch to unbox and configure. Your biggest challenge will be finding somewhere to place the subwoofer, but it’ll happily sit behind a monitor or on the floor. From there, simply connect the power cable to an outlet, the subwoofer cable to the subwoofer, and the USB cable to your computer. I do wish the cables were a smidge longer, though.

I highly recommend replacing the default rubber feet with the included angled alternatives. They’re incredibly easy to slot in and out, yet they still have a robust enough fit to support the soundbar. Razer seems to have deliberately designed the length and height of the Leviathan V2 to seamlessly slot beneath a 24-inch monitor’s desk stand, and it certainly comfortably fit beneath my MSI Optix MAG274QRF-QD gaming monitor.

Windows 11 detected the Leviathan V2 straight away and I was able to pump out big audio immediately. While that’s the shortest path to playback, you should download the Razer Synapse software. Admittedly, it’s a bit underwhelming for what you can tweak for the Leviathan V2, but Synapse does let you switch between stereo and THX Spatial Audio. Plus, here’s where you can test equaliser settings between THX, Game, Movie and Music, or customise your own.

There are also RGB lighting tweaks in Synapse (if that’s your jam), but I found the default settings were subtly appropriate at 40 brightness.

What is Razer?
Razer was founded in 2005 and has dual headquarters in California and Singapore. The company has grown to have 18 offices around the world and its software platform boasts more than 175 million users. Today, Razer makes gamer-centric peripherals and laptops. 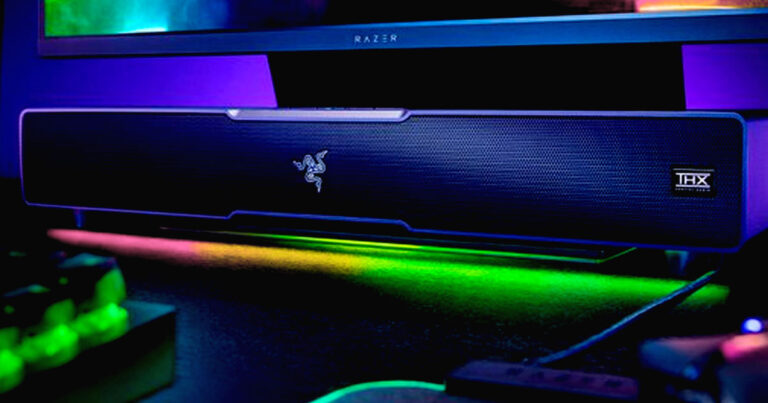 There are two things I like when it comes to speakers or headsets. First, loud volume or at least the option to go uncomfortably loud. Second, big bass and a way to easily tweak it. For lovers of volume cranked up to 11, the Razer Leviathan V2 has you covered. It can absolutely get uncomfortably loud to the point you can expect the neighbours to be banging on your door to turn it down.

As for the bass, it’s more tuned than titanic. Basically, it feels appropriate for the equaliser settings, but it didn’t blow me away. Tweaking bass also requires some equaliser knowledge, which hammers home the light-on audio configuration options within Razer Synapse. Outside of equaliser settings, you’re only left with a stereo or THX toggle, a centre focus switch, and then there’s a lighting tab for RGB lovers.

One convenience inclusion I absolutely loved within Synapse is the option to set a secondary sound device for the soundbar’s toggle button. The toggle button is lit up and located on the left, so it’s easy to find, and I appreciate being able to effortlessly switch between Leviathan V2 audio and whatever headset I’m reviewing at the time.

As for the sound quality, bass gripes aside, I love the overall balance of the soundscape. Whether the volume is low, mid or loud, audio playback is always clear. The Leviathan V2 is a great complement for high-fidelity music services like Tidal where you can appreciate the higher bit rate. The same is true for a rich soundscape for movies, YouTube videos and gaming. I’m particularly fond of how clear voices are with THX Spatial Audio enabled so they don’t get lost amid competing sounds.

Pros and cons for both, but the Katana V2 has the edge.

Still, the Sound Blaster Katana V2 has the sound advantage, which isn’t surprising given Creative’s audio-centric history. The Katana V2 offers up to 24-bit 96kHz playback via USB connection, whereas the Leviathan V2 maxes out at 24-bit 48kHz. While the Leviathan V2’s sound quality is nothing to sneeze at, the depth and balance of the Katana V2 makes for better overall audio, plus Creative’s soundbar offers bigger bass and straightforward bass tweaking.

The Katana V2 also comes with a remote to really hammer home that Creative has built a soundbar that’s absolutely built with PC gamers in mind, but it can also be used with so many other devices in the home. One PC-centric convenience that the Leviathan V2 has that the Katana V2 doesn’t, though, is the dedicated button for toggling between audio sources.

Still, if you’re willing to spend the extra $90, the Katana V2 offers enough value to justify the price difference.

Is the Razer Leviathan V2 worth buying?

A good investment for soundbar fans.

If desk space is a premium and you don’t want to mess around with 5.1 or 7.1 surround sound, the Razer Leviathan V2 is worth buying. While the bass lacks a few levels of bravado, the volume and overall audio balance are great. The virtual surround sound isn’t a viable replacement for a quality gaming headset, but the Leviathan V2 is still a neat inclusion to any gaming desktop.

How we review speakers

Our main focus with speakers is how they sound. This means we put them through the paces of everyday use, depending on what they’re designed for. If it’s TV speakers, we use them to watch a variety of content, including TV shows, movies as well as playing games.

For other speakers that aren’t designed for TV, we spend a lot of time listening to a variety of music, comparing them to whichever speakers are our typical go-to options. We like speakers that are incredibly easy to set up and just work after being connected without having to tinker with software. That said, we also look at any available companion software to test the versatility of speakers, particularly smarter options.

Connectivity is important, which is why we favour speakers that offer the user plenty of options, including wired and wireless. Basically, the more versatile a speaker in terms of its uses, the more potential uses it has, and the greater its value. Where available, we also test remotes to ensure they’re intuitive and responsive as well as other applicable features like voice control.

The Razer Leviathan V2 is built as a PC soundbar, so it uses USB to connect but also allows for wireless Bluetooth connections. It’s unfortunate to see that Razer has ditched the aux-in and optical-in ports from the original Leviathan, though.
Not really. The Razer Leviathan V2 is a PC soundbar, although you could technically rejig a workaround and connect the soundbar via Bluetooth (but there is no remote nor an app to control volume).
While the Razer Leviathan V2 isn’t going to offer a competitive edge online for those after sound accuracy, it’s a great soundbar that offers big sound and clear vocals for games. I used it extensively for single-player gaming for this review.