Google Fiber TV announced the first week of February that they’re going to stop selling their conventional TV service altogether.1 Existing customers can still use their TV service, but they’re not taking any new customers.

We’ll go over what Google Fiber has decided to focus their efforts on instead and what your other options are for live TV.

What happened to Google Fiber TV?

Originally, Google Fiber TV was packaged together with their internet. It’s a linear TV service, which just means it’s a traditional style of TV, like cable or satellite—not a cord-cutter service.

The internet side of Google Fiber has had its own struggles that we could spend an entire video on. But today is more about the TV side of things. And those struggles have been real.

By 2016—with three years and six major markets in service—they had only a little over 84,000 TV subscribers.

That might not mean much, but to compare, YouTube TV has over 2 million. And YouTube TV is only three years old. And that tiny number for Google Fiber probably hasn’t grown much since they stopped offering TV in their new markets awhile ago.

How much is Google Fiber internet?

Google Fiber, for new signups, will be an internet-only service. Gigabit internet—to be exact—for $70 per month.

How much is Google fiber internet?
Data effective 07/22/21. Offers and availability vary by location and are subject to change.
* Terms and Conditions: Plus taxes and fees. Service not available in all areas. If you live in an apartment or condo, Google Fibers ability to construct and provide Fiber is subject to the continued agreement between Google Fiber and the property owner. Upload/download speed and device streaming claims are based on maximum wired speeds. Actual Internet speeds are not guaranteed and may vary based on factors such as hardware and software limitations, latency, packet loss, etc

And Google is also encouraging its current and future users to subscribe to a live TV streaming service. So now, when you sign up for Google Fiber internet, you get the choice to add on a YouTube TV or fuboTV subscription. 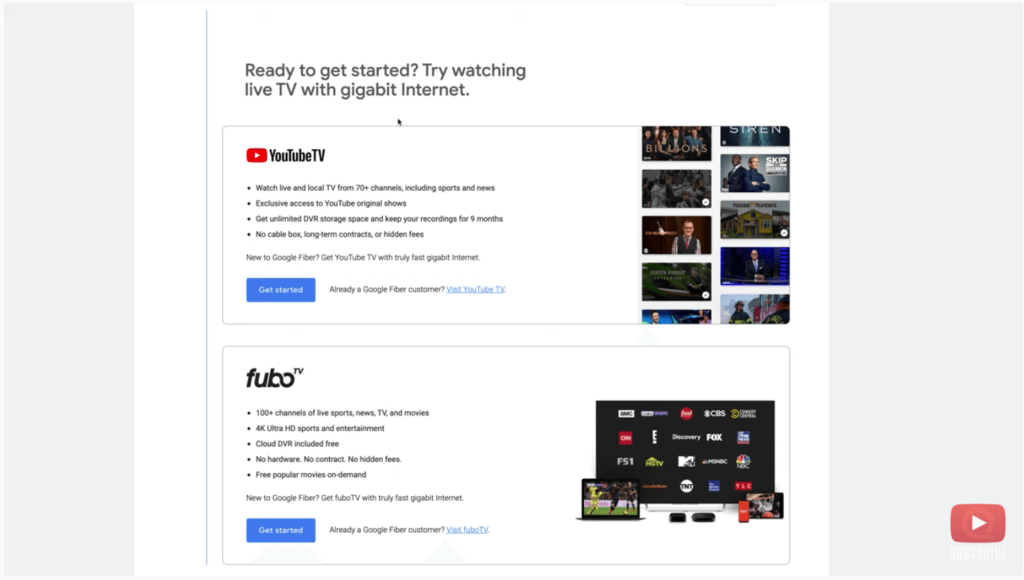 The lack of traditional TV doesn’t mean Google Fiber internet is any less attractive. Google Fiber’s internet gives you unlimited data with no contract. So you can cancel whenever you want. And it lets you stream on more than 20 devices at a time.

You’ll also be able to upload and download large files super quick. For example, if you were to download the video at the top of this page (which might be about 3 GB), with your standard cable connection (let’s say 50 Mbps as a good average), it would take you about eight and a half minutes to download this video in 4K.

With gigabit internet, it would only take you about 20 seconds. 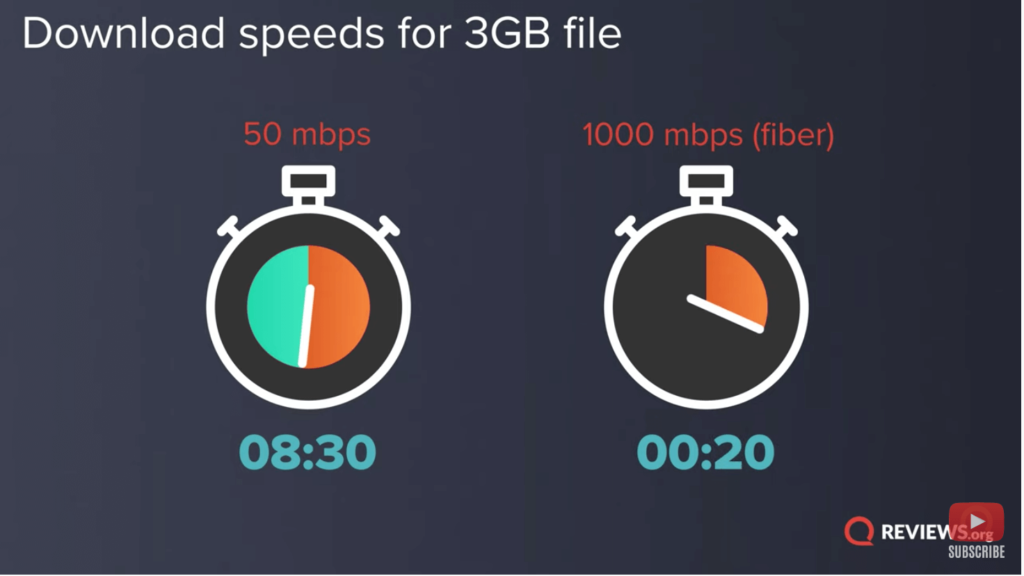 And if you’re a content creator or streamer or someone else who cares about upload speeds, in this same scenario, if you want to upload this video to the web, that cable connection will have a much slower upload speed than download speed, and uploading will take you about 43 minutes.

With symmetrical upload speeds on fiber, you can upload just as quickly as you download. So again, it would only take you about 20 seconds. 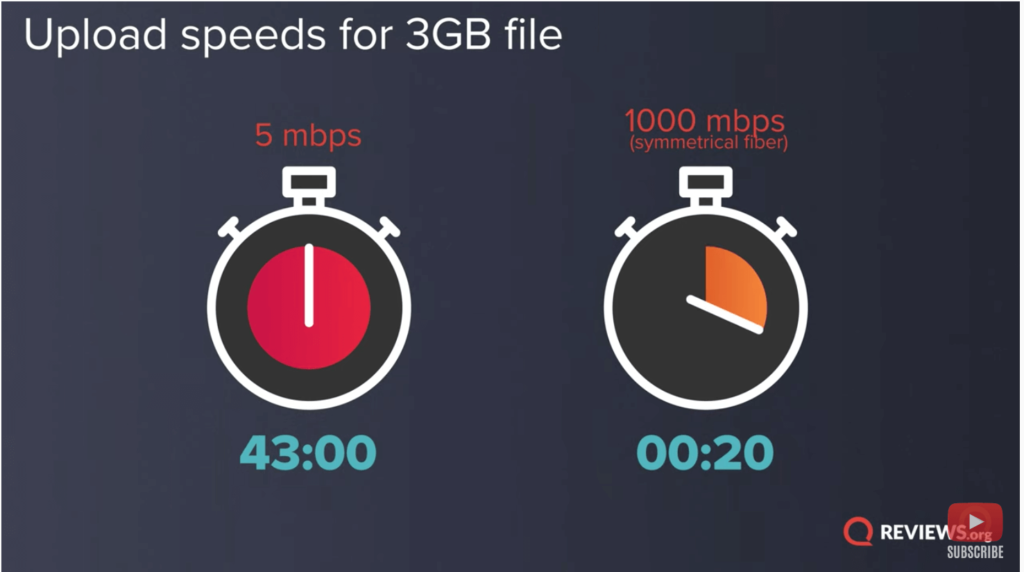 Most of us probably don’t care as much about upload speeds, though. It’s more about those download speeds. And like I said, they’re pretty great.

With gigabit internet, you’ll pretty much never have to worry about buffering when watching Monday Night Football on a streaming service, and you can video chat your family who lives in another state in HD without freezing.

Is Google Fiber available in my area?

Here’s the big caveat: Google Fiber is still offered only in 19 cities. So hopefully, you live in one of these select cities. 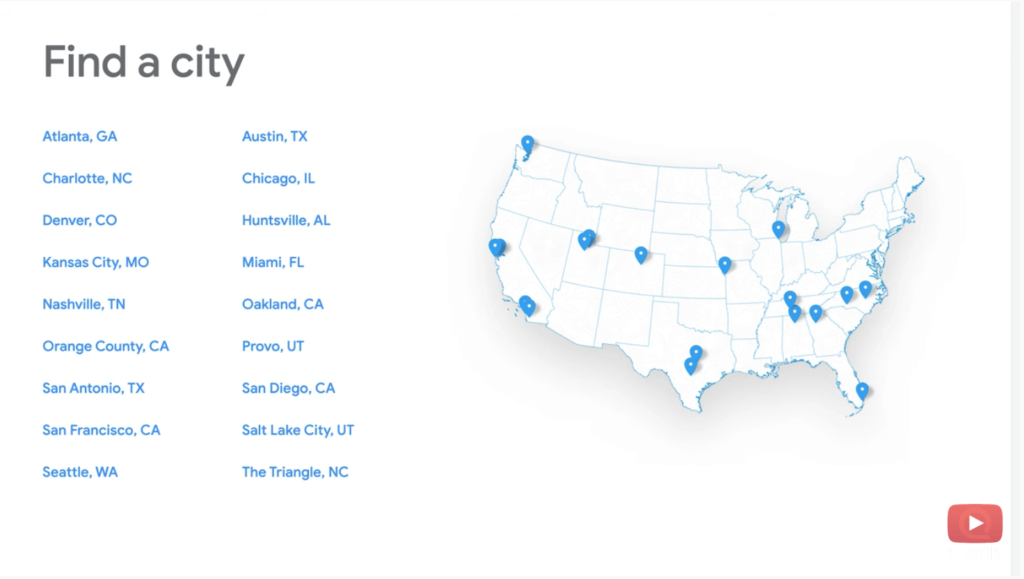 What are your other alternatives to Google Fiber TV?

Since you can’t get Google Fiber TV anymore, let’s explore your other options. We assume if you have cable TV, you’re already bundling with internet. So no cable TV talk here. That leaves you with streaming or satellite.

Again, Google Fiber gives you the option to subscribe to YouTube TV or fuboTV when you sign up for the internet service. So we’ll start with those.

YouTube TV, my personal favorite, is $65 per month for access to more than 85 live cable and local channels, YouTube original shows, on-demand TV shows and movies, and an unlimited DVR space. So record all of The Bachelor episodes and 30 for 30 movies, if you want.

For $65 per month, fuboTV will give you more than 100 channels of sports, news, movies, and lifestyle. You’ll also get on-demand TV shows and movies and 250 hours of Cloud DVR storage.

Another great option for live TV is Hulu Live for $55 per month. And for just a little extra money, you can bundle with Disney+ and ESPN+. I know I’m not leaving my couch. You get an endless amount of Hulu originals, princess movies, and live game coverage.

Best streaming alternatives to Google Fiber TV
Data effective 01/08/21. Offers and availability vary by location and are subject to change.
‡ For 24 months with a 2-year agreement and eAutoPay.
^ For 12 months with a 2-year contract, paperless bill, & autopay. Price increases for months 13-24.

Now for satellite TV, you’ve got two options: DISH and DIRECTV. Let’s start with DISH. DISH has a no-contract option or a two-year contract option, which ends up making the monthly bill a little cheaper.

They have four different plans and channel lineups to choose from. All of their plans come with your local networks, ESPN, Disney Channel, HGTV, and Food Network.

DIRECTV, on the other hand, is a great option if you and your family need a lot of TV channels. DIRECTV has a few caveats. Unlike DISH, who has a no-contract option, you are required to sign a two-year contract with DIRECTV.

Also, its prices hike up in year two. But you do get NFL SUNDAY TICKET, so you can watch all out-of-market Sunday NFL games.

Recap: There are still lots of other great live TV options

With all that said, since Google Fiber TV isn’t a thing anymore, you still have so many great live TV options. And you could pair it with Google Fiber’s gigabit internet because it’s 2021. And it’s reliable and speedy.

And no one likes to see the spinning wheel of death when you’re in the middle of watching a dramatic movie scene, like when you’re watching the Beast fight Gaston on top of the castle.