Mint Mobile and US Mobile are two of the most popular discount cell phone carriers on the market. Both carriers offer cheap and simple plans that can save you a ton of money on your phone bill. But which one is better?

The short answer is this: US Mobile offers better plan selection (including a free plan), better coverage, and cheaper prices overall. But Mint’s data speeds should be faster in most cases, and its unlimited data plan is one of the cheapest on the market.

There’s a lot more to consider about these two carriers, and we’ll go over all of the juicy details—including plans, pricing, and performance—in this Mint vs. US Mobile review.

Before we dive into our in-depth review, let’s talk about the basics. What do you need to look for when choosing a new phone plan?

Mint Mobile vs. US Mobile plans and pricing

Mint’s unlimited data plan is a great deal, but US Mobile has some unbeatable prices

Mint and US Mobile are both mobile virtual network operators (MVNOs), which is just a fancy way of saying that they don’t own their own cellular networks. Instead, they lease bandwidth from larger companies to bring service to their customers.

This means that both companies are able to offer plans that are much cheaper than those offered by traditional carriers, like Verizon and AT&T. But it also means both carriers have relatively slow data speeds.

The big differences between Mint and US Mobile’s plans are the prices, data allotment, and perks. Here’s everything you need to know, beginning with Mint.

Mint Mobile has four plans on the market right now. Every plan from Mint comes with these features:

Each plan also comes with a certain amount of 4G LTE data, from 4–35 GB. Take a look at the prices in this chart.

With Mint’s 4–15 GB plans you can, technically, still use data after you reach your cap. But that data will be at 128 Kbps speeds, which is not enough to do really anything (like stream your favorite song on Spotify or watch a YouTube video).

Then there’s the unlimited data plan, which is actually more like a 35 GB plan. Once you use more than that, your speeds will be reduced. While 35 GB is plenty of data for most people, it’s certainly not unlimited.

All of Mint’s plans come with a risk of data deprioritization, which means that your data speeds can be slowed down when the network is busy.

In short, Mint’s plans are a great deal for those who want a cheap plan with a decent amount of data. But those who need truly unlimited data or super-fast data speeds will probably want something different.

A note about Mint’s prices

Mint definitely makes our list of the best cheap plans. But there is a drawback to these prices that you should know about before signing up. Mint’s prices will increase after the first month, unless you sign up for multiple months in advance.

Take Mint’s 15 GB plan. It goes from $25 to $45 after the first month! You have to sign up for 12 months of service to keep that low $25 price. Here’s a screenshot of the fine print on Mint’s website. 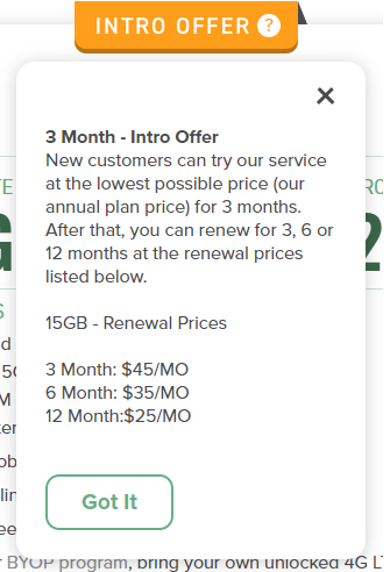 US Mobile’s plan structure is different from Mint’s. Rather than offering just a few data plans, US Mobile has a plan for pretty much every kind of user, whether you just want a few minutes or you want unlimited everything. There are literally too many plans to list out here, but this chart shows some of the company’s most popular offerings.

In general, US Mobile’s plans offer more bang for your buck than Mint’s. For example, the unlimited talk and text plan with 5 GB of data costs just $10. With Mint you’ll pay $15 and get just 4 GB of data.

Plus, US Mobile offers plans with less data or no data at all, including a free 75-minute plan (yes, it’s truly free after you apply a discount from WhistleOut and pay the $3.99 start-up fee).

So what’s the catch? Why are US Mobile’s prices so low? One explanation is that the company’s data speeds are lower than Mint Mobile’s. While it’s impossible to get firm data on this (carriers don’t usually release information about their specific data speeds), many online reviews from customers talk about how US Mobile deprioritizes data more than some other MVNOs.

This theory is backed up by the fact that Mint Mobile uses T-Mobile’s network, which has baseline speeds that are higher than US Mobile’s parent network, Verizon.

Before we finish talking about plans and pricing, we want to take a closer look at these two companies’ unlimited talk, text, and data plans.

As you can see, Mint’s plan is $10 cheaper than US Mobile’s and doesn’t require a $3.99 start-up fee. It seems like the obvious choice. But there are a few details you should consider.

First of all, Mint’s unlimited plan actually has a data cap of 35 GB per month. Meanwhile, US Mobile’s unlimited plan is truly unlimited. You won’t have your data cut off or throttled because you use too much.

On the other hand, Mint Mobile lets customers use their phone as a mobile hotspot for free. With US Mobile you have to pay an extra $10 a month for hotspot data.

All in all, Mint’s unlimited data plan is probably the better deal for most casual users. But if you need truly unlimited data, then you should go with US Mobile.

We're shopping for a new cell phone plan too

Watch this video to find out why one of our mobile experts is choosing between Visible, Mint, and US Mobile for their next cell phone plan.

Mint vs. US Mobile family plans

If you’ve got multiple people in your family who want the same type of cell phone plan, then you really should bundle together with a family plan. A family plan can cut your costs way down and make paying your bills easier.

Both Mint and US Mobile have family plans available. But only US Mobile will actually give you a discount for adding additional lines to your account.

There’s really no comparison here. If you want to get a family plan, then US Mobile has the better deal.

Mint vs. US Mobile coverage

It’s actually a competition between T-Mobile and Verizon

As we mentioned above, both Mint and US Mobile are MVNOs that don’t operate their own cellular networks. Instead, Mint uses T-Mobile’s network and US Mobile uses Verizon’s.

This means that Mint’s customers will be on the network with the fastest data speeds (though those speeds will be deprioritized) and the largest 5G infrastructure. Meanwhile, US Mobile customers will have the best nationwide coverage through Verizon. There are advantages to both, and you’ll have to decide which one is better for you.

If you want to see how the coverage compares in your specific area, zoom in on these coverage maps.

Mint vs. US Mobile phones and devices

Buying a brand-new smartphone can set you back a thousand bucks or more. But it doesn’t have to. Taking advantage of phone deals when you’re signing up for a new plan can save you hundreds. Both Mint and US Mobile sell new phones at decent prices (though Mint has a better selection).

Here’s a look at some of the most popular devices sold by each company.

That’s it for our in-depth review of Mint and US Mobile. Now it’s up to you to decide which carrier is best for you. Here’s a quick recap to help you make up your mind.

If you’ve made up your mind then you can sign up for Mint or US Mobile online. If you’re still on the fence, then maybe you should check out these other great plans.

We take our responsibility as reviewers seriously. When we analyze cell phone carriers, we use all of the information available—including proprietary data from over 100,000 mobile customers—to make informed and unbiased recommendations to our readers.