2022 Cell Phone Usage Statistics: How Obsessed Are We?

On average, Americans check their phones 344 times per day

In the US, up to 47% of us would say we’re “addicted” to our cell phones—it’s no wonder with a dazzling array of unlimited data plans and new smartphones every year.

We surveyed Americans 18 and older about their phone habits and behaviors. And like Narcissus staring into an endless pool of reflection, most of us can’t live without our cellphones in sight for very long—if at all. 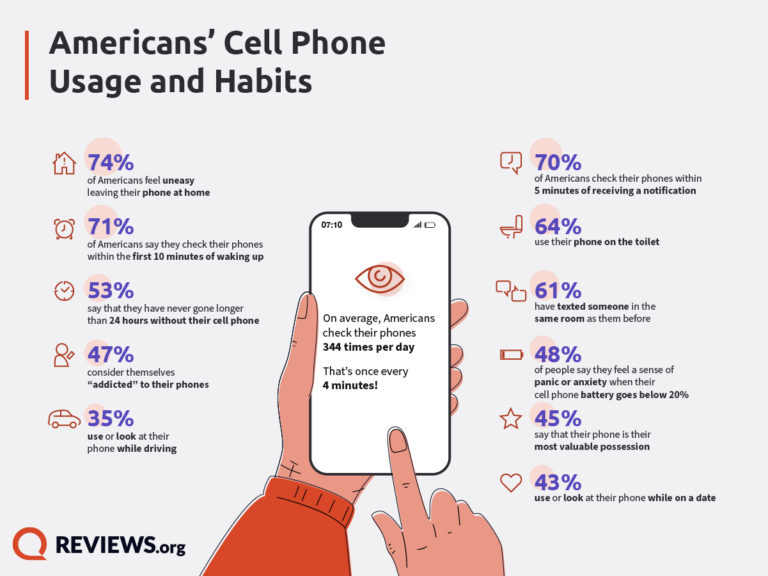 How often are we using our phones?

On average, Americans check their phones 344 times per day. (That’s once every 4 minutes!)

Our cell phones are our constant companions. As many as 71% of us check our phones within 10 minutes of waking up. And 74% of us can’t leave our cell phones at home without feeling uneasy. Nor can we imagine our little companions dying—48% of people say they feel a sense of panic or anxiety when their cell phone battery goes below 20%.

Even while driving, 35% of Americans use or look at their cell phones. On romantic dates, 43% of us are more wrapped up in our phones than our partner’s company.

And when we say “I couldn’t be without our cell phones for five minutes,” most of us mean it—70% of Americans check their phones within five minutes of receiving a notification.

On average, we check our phones every four minutes.

Over half of Americans have never gone longer than 24 hours without their cell phones.

We’re so reliant on our phones that 61% of us have texted someone in the same room as us. And, lest we sit enthroned without our cell phone scepters, 64% of us use our phones on the toilet too.

It’s no surprise that 45% of Americans say that their phone is the most valuable possession. What is surprising is how far our obsessions with cell phones go:

Now, we’re not saying you should stop endlessly scrolling, but we’d like you to keep yourself (and your animal friends) safe—you can always replace your cell phone!

How much time will Americans spend on their phones in 2022?

All those quick little social media check-ins, along with the rabbit holes of funny memes and videos, mean Americans spend an average of 2 hours and 54 minutes on their phones each day. The average American will spend nearly a month and a half (44 days) on their phones in 2022! 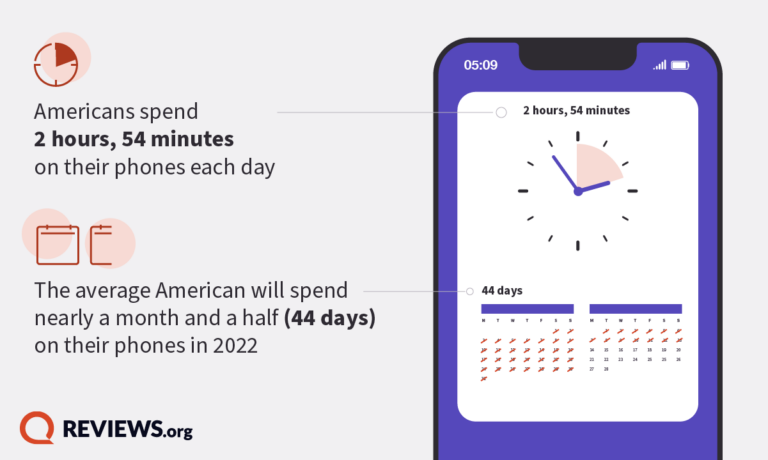 On average, Americans spend nearly three hours of every day on their phones, but some of us have taken our cell phone love too far. While some of us are a little distracted, others are willing to risk life and limb to keep up with our texting and scrolling lifestyles.

We’re not here to judge (some of us are right there with you)—but still, it might be a good time to make sure if you’re going to use your phone, you like using it.

Check out our mobile reviews to get what you need:

Reviews.org surveyed 1,000 Americans 18 years and older with a +/- 4% margin of error and a confidence level of 95%. The survey results were weighted to reflect characteristics of the United States population using available data from the US census.

Respondents were asked to refer to their phone’s screen time report to determine the average number of times per day they check their phones, in addition to how much time in total they spend on their phones per day.

Has our obsession with cell phones grown since 2021?

This year, Americans check their phones 344 times per day. And last year, it felt staggering to say it was 262 times per day—that’s a 31% increase.

Our cell phone habit seems to be growing by the minute. We used to check our phones every 5.5 minutes on average, but now we’re down to just 4 minutes before our codependency kicks in. Oof.

To compare the rest of the stats, jump to our 2021 report below!

Do you feel the hypnotic glow of your cell phone pulling you in every time you receive a notification? Do you feel uneasy when your mobile screen stays dark, so you just have to check to make sure you didn’t miss anything?

You’re not alone. On average, Americans checked their phones 262 times per day in 2021—that’s once every 5.5 minutes!

In the land of unlimited data plans and stupefying smartphones, we surveyed Americans 18 and older about their phone-related behaviors to see how far we’ve fallen into our screens.

How do your cell phone habits stack up against the rest of the US?

Most Americans spend their mornings, days, and nights with cell phones 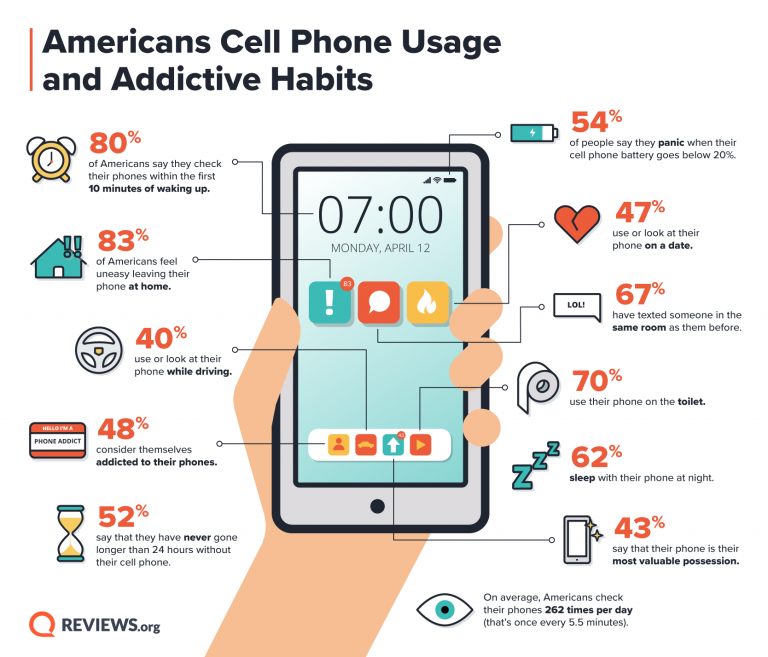 From the moment they wake up to the time they go to sleep, Americans stay glued to their phones. They’ll even resort to texting someone in the same room instead of talking to them.

Nearly half of Americans consider themselves addicted to cell phones

Despite dangerous driving or deflated dates, most people can’t stand to set aside their handheld communication companions for more than a moment

But are cell phones really that great? In our survey, 41% of respondents say they’d rather give up sex for a year rather than give up their phone for a year. And 46% say they spend more time on their cell phone than with their significant other.

Most Americans spend their mornings, days, and nights with cell phones 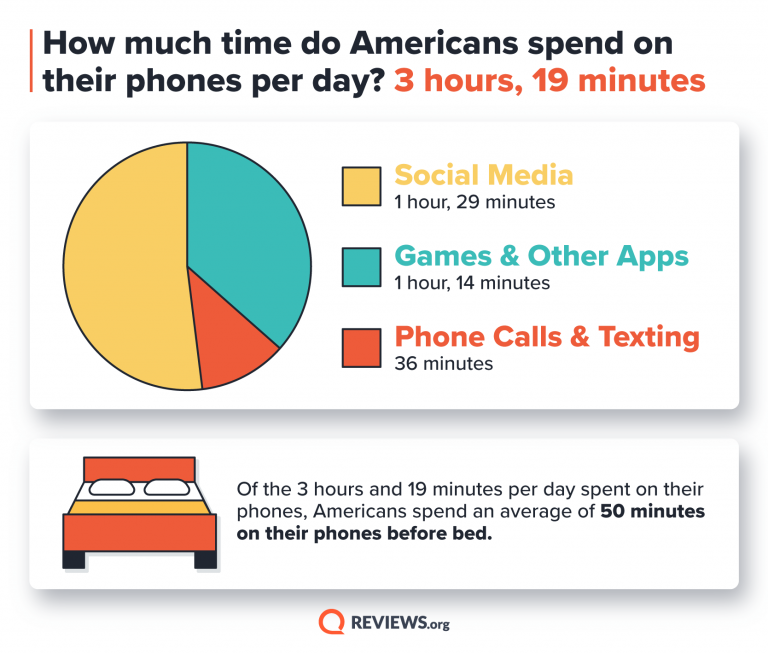 We like to think of our cell phones as communication devices that help us chat and connect with the world. However, most people spend most of their time scrolling social media, playing games, or using other apps. Phone calls and texting only accounted for just over a half-hour of our daily cell phone activity.

Will we break out of our endless cell phone cycles? Probably not

Although it’s hard to say how or when humans can strike a balance between their screen time and their offline time, it doesn’t look like we’re fighting off our cell phone cravings any time soon.

We also asked respondents to refer to their phone’s screen time report to determine the average number of times per day they check their phones and how much time in total they spend on their phones per day.

By
Easton Smith
Best iPhone Models of 2022
We review the five best iPhones on the market right now, with picks for best...

By
Easton Smith
How to Pay Your Spectrum Bill
There are six simple ways to pay your Spectrum Internet, TV, and Mobile bills. We’ll...