Is Xfinity’s Flex a good cord-cutting option?
Xfinity Flex Plans
https://www.reviews.org/tv-service/xfinity-flex-review/
Xfinity Flex lets Xfinity internet users pull all their streaming apps into one interface. But is it good for cord-cutters?
December 1, 2020

Xfinity is tired of it! Tired of seeing TV cord-cutters wander over to play on their Roku, Apple, or Amazon devices. Flex is their attempt to keep some of that money from strolling out the door. So, how did it do?

Well, here’s the TL;DR: I only got to test drive the Flex about halfway. And that’s a vital part of the story of the Flex.

But! We can still talk about what Xfinity Flex is, how you get it, how it works, and whether we like it. Let’s dive in.

Okay, so first off: What in the heck in the Xfinity Flex? In short, Flex lets you gather all your favorite streaming apps into one dashboard. So, how do you get it? 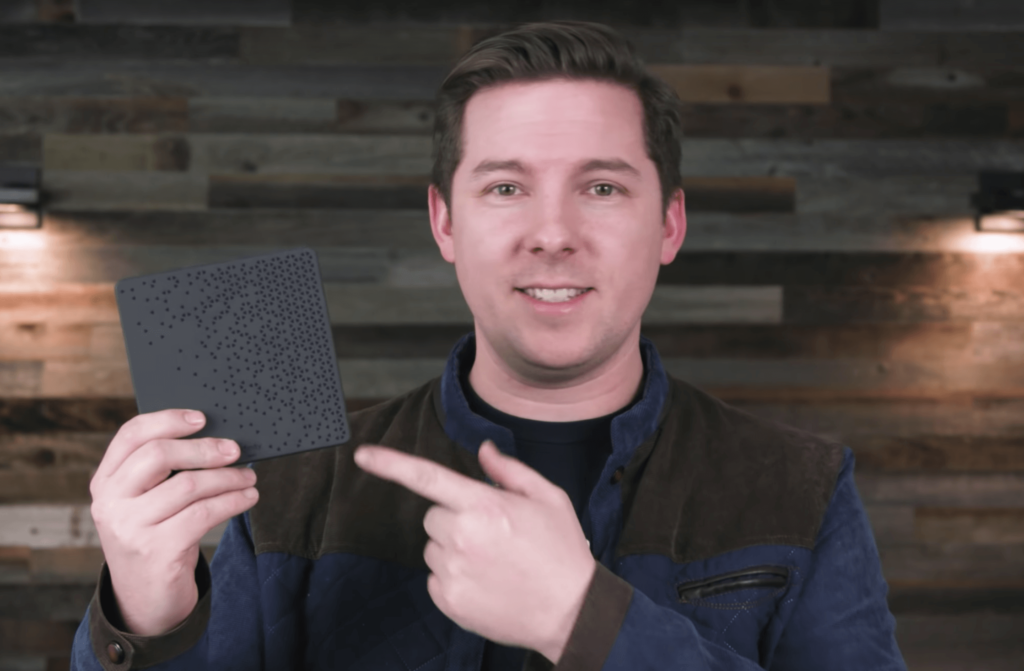 This is it. This is the Flex.

Flex is free to Xfinity internet customers. (Hey, that’s me!) Indeed, all I had to do was go online and claim mine, and it arrived on my doorstep a few days later. What if you’re someone else? Too bad—this is an exclusive device. But since Xfinity provides internet service to about 110 million people across 40 states, Flex is pretty widely available.

Flex is not going to bring new customers to Xfinity because it’s an exclusive device. It’s designed to make current subscribers a bit “stickier.” Meaning you’ll have a harder time jumping ship if you have yet another Xfinity device in their rotation.

Xfinity Flex includes the box, the remote, a power cable, and an HDMI cable. So it’s ready to go right out of the box.

The device itself is fine. It’s got all the ports you would expect, and it includes an Ethernet connection, which I always recommend if you’re able to take advantage of it.

The remote is . . . okay. It’s a lot more like a cable remote than a streaming remote, with tons of buttons, including a number pad. Wait, a number pad? What? Yeah, that’s so that if you decide to call it quits with Flex, the same device will work on the X1 platform as well.

Once I started setting up the Flex, I got frustrated right out of the gate: I couldn’t get the remote to work. I couldn’t get it to pair with the streaming box. It turned out that the box was extremely directional. I didn’t know this would be the case because I didn’t even see an infrared receiver on the box. But I just needed to turn the box 90 degrees, and it worked like a charm. Once I got through setup, the remote worked through radio frequency so I could point it anywhere, and it worked fine.

Flex will connect automatically to your Xfinity Wi-Fi, which is great—except, while I have an Xfinity router, I actually have my network set up through Google Wi-Fi. So I had to do it manually, which was no big deal.

Now that the Flex is set up and I’ve connected all my accounts, let’s talk about how to navigate the interface.

The first tab on the front page is called Free to Me, and it’s exactly what it sounds like. It’s gonna show content that you can watch for free. I saw 35,000 movies available. At first I thought, “Whoa! Is Xfinity giving me all that?” Then I realized that, of course, it’s pulling content from my Netflix and Amazon Prime accounts. So it’s not just Xfinity’s generosity here. I will say that it’s nice to have everything right there—well no, not everything. But we’ll get to that in a bit.

Flex lets you see content from all your streaming providers in one place.

The next tab, Live TV, pulls channels and content from preloaded apps like Pluto TV and Xumo. These are commercial-supported, free TV apps. You can check out our full review if you want to learn more.

The New tab has new titles from Netflix, Prime Video, YouTube, and now Hulu, but that’s all buried under the new titles you can rent or buy from Xfinity. I don’t hold that against Xfinity, since this is similar to what you would see from similar services, like Amazon Fire.

Music is . . . you know, music. Like video, this will pull from services you link up (YouTube, Amazon Music, etc.). I found myself drifting toward video content here as well, since I could watch music videos from YouTube, which was pretty cool.

The last tab, Today, gives you what you might expect: weather and news, politics, celebrity gossip, late-night roundups, and so on. But this is also where you can go if you are deeply embedded in the Xfinity ecosystem. 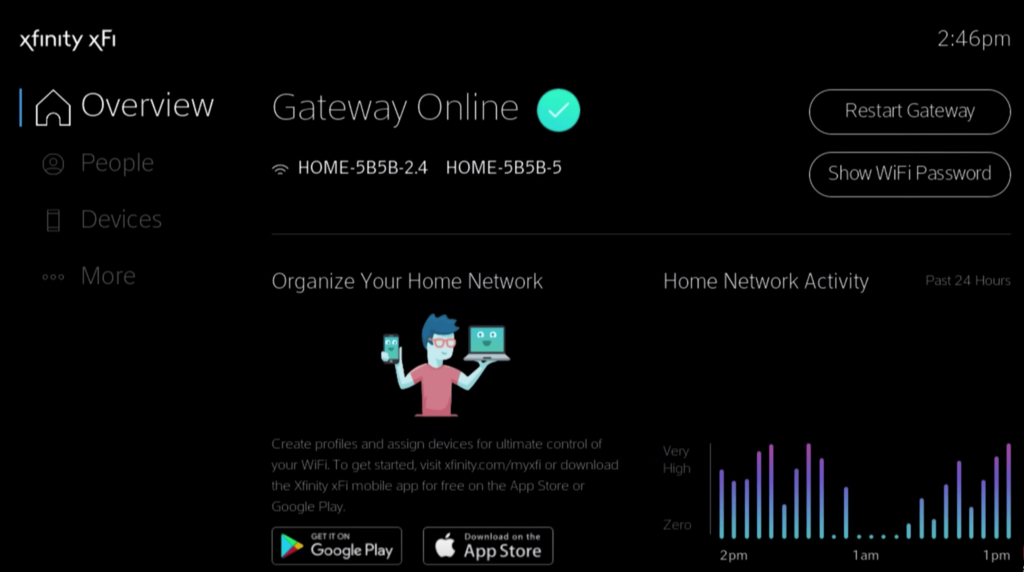 You can manage your xFi gateway through the Flex.

If you use Xfinity Home for smart home and home security stuff, you can monitor camera feeds, control thermostats and lighting, and so on, from your TV. You can also manage your xFi gateway—that’s your internet router. It will let you pause certain devices’ access, like if a kid has been watching too much TV today.

But I say you have to be deeply embedded in the Xfinity ecosystem because if you use a third party router—like me, I use the Google Wi-Fi mesh system—then devices hooked up through that router won’t show up here.

Let’s talk about the that you get with Xfinity Flex. There is some good stuff: Netflix, Amazon Prime Video, Acorn TV (that’s a British TV streaming service), Streampix, Tubi, HBO, Showtime, and Starz. Now with the exception of Netflix and Amazon Prime Video, Flex wants all of your subscriptions to run through Xfinity. So instead of paying for any of those apps, like Acorn TV or HBO, directly to the content provider, you can actually sign up so that it will be added on to your Xfinity bill.

But sharp viewers will notice that I left a few names off the list here. There’s no Disney+, no Paramount+, no Spotify, and so on and on and on. There are a lot of apps missing. In fact, it’s probably faster to list the apps that it does let you use.

Now, I can think of a few reasons why there would be a dearth of apps, but for our purposes today, the why might not be that important. What it means in practice, though, is that I’ll never get to make one of those Best Free Apps videos for Flex like we’ve done for Roku, Amazon Fire, Apple TV, Chromecast, and Android TV.

I mean, that’s one of the joys of streaming, right? Finding stuff that you never would have known about, let alone watched if you didn’t have it for free right there on your Roku. If all I had was Flex, I’d never have discovered the Japanese dramedy Pretty Proofreader on Viki. Now you can laugh all you want—it’s fantastic.

As for what content is there, you can use things like Netflix, Amazon Prime Video, and YouTube, but Xfinity does its best to keep you on its interface instead of sending you somewhere else. For example, there’s no obvious button to take you to the Netflix app from Flex’s front page. Now you can find it, but you gotta dig, as it’s all the way at the bottom. Instead, it gives you a button called Explore Netflix, and that shows you Netflix titles but still keeps you on the Flex interface.

Flex has you explore other apps through its own interface.

I rolled my eyes at first. But then I saw that there might be some useful stuff, like the option to see what to watch on Netflix in February. Great! Let’s see what’s coming up. Well, turns out it’s a YouTube video. Okay, now I’m in the YouTube app. Let me just hit the back button to get back to where I was. No, I can’t do that—gotta go back to the home page and then navigate back to Explore Netflix.

Technically I could just use the exit button, but it took me a while to figure that out. It’s not really intuitive: there is a learning curve with the interface.

First, let’s look at Flex as a cord cutting device. If I was brand new to cord cutting—and I mean brand new, like I had never signed up for Hulu, I had never even heard of Roku, and I’m getting my first ever streaming device—then the Xfinity Flex would be okay. It certainly works, it plays high quality video content, and it does have a functional remote control. But it has an extremely limited app selection. As a cord cutter’s device, I put this one pretty much way down at the bottom of the list.

Now, was there a lot that made me really dislike the Flex? No, not a ton. It was pretty easy to use, honestly, but it was more about what wasn’t there. Because of that lack of available apps, this is not a replacement for your Roku, Fire Stick, or Apple TV.

The saving grace for the Flex might be for those who are really all-in on Xfinity’s ecosystem. The Flex gives you pretty good control over your Xfinity router from your TV. Or, if you use smart home and home security features with Xfinity Home, those can be integrated so you have on-screen video feeds from your security cameras and controls for your thermostat and lighting. If you are neck-deep in Xfinity services, maybe Flex is worth a look.

The only problem here is . . . that’s not me. I’m not all-in on the Xfinity ecosystem, so I feel like I only got to test half of what the Flex is capable of. And the half that I got to test didn’t impress me very much. But I’m interested to see what happens with the Flex going forward and if there are any changes, updates, or added apps. I am going to continue my testing once I get access to the rest of the Xfinity suite so that I can tell you what I think. Because the promise of it is pretty cool.

Let me know what you think in the comments. If you’ve had a chance to use the Flex to its full extent, go ahead and sound off with your take on the device.