If you’re heated up over a bad cable bill, then Amazon Fire TV will save you money and headache.

Whether you’re after the Amazon Fire TV or the Amazon Fire TV Stick, you’ll see the differences are small but important, depending on what you want from the streaming service. All you need is a fast enough internet connection and then you can be streaming from sources like Amazon Prime Video, Sling TV, DIRECTV NOW, fuboTV, and Playstation Vue in no time.

What the Amazon Fire TV does

Amazon Fire TV consolidates your different streaming services like Netflix, Youtube, and Hulu into one convenient platform, so it’s one of the best solutions for cord-cutters out there.

Amazon’s recent release shows progress toward the perfect streaming device. This Amazon Fire TV plays 4K Ultra HD, integrates Alexa voice remote, and uses Wi-Fi for wireless setups. Although not everyone seems to think of it as an upgrade, we’re more than happy to see the next generation’s improved resolution and processor.

To help you distinguish between the different Fire TV models, we’ll use the following terms:

All Amazon Fire streaming devices have access to Amazon Prime Video and stream the same type of content to your TV, but after that there are a few big differences.

In short the differences between the 2017 Fire TV has the fastest processing power, is streamlined for Wi-Fi users, and has the best picture. The Fire TV 2 (2015) is the most self-contained version with a fast processor for gaming, the ability to bring in content from a microSD slot and connect accessories via USB. The Fire TV Stick is the most portable version, but doesn’t have the processing power nor resolution of the full-sized Fire TV.

The first generation Fire TV and Fire TV Stick (both 2014) were great at the time, but we don’t really think it’s worth seeking out these older models.

In the 2017 edition, the All-New Fire TV costs $70, plays content in 4K Ultra HD up to 60fps, and works with 802.11ac Wi-Fi (a secure form of Wi-Fi). If you want added signal reliability, we’d recommend purchasing the additional Amazon Ethernet Adapter.

Some argue that the All-New Fire TV should replace the Fire Stick and not the Fire TV 2.

The last generation of Fire TV had 1080p resolution, a direct ethernet connection, a microSD for additional games, apps, or other content you own, and a USB port for keyboards, mice, or external hard drives.

It’s a fair argument since the Stick is a lot more stripped-down. We think most users would be happy with either; tech-savvy users would probably like the options the Fire TV presents, while those who want the simplest streaming solution with a higher quality picture will prefer the 2017 Fire TV.

Fire TV Stick costs $39 at the time of writing this review, plays content in 1080p, and resembles a large USB thumb drive that connects to your TV’s HDMI port. Along with the Fire TV Stick, you’ll get an HDMI extender in case your port is too hard to reach.

Saving by switching from cable

At less than $70, the All-New Amazon Fire TV is less expensive than one month of service from some cable providers. And although we don’t anticipate this being the last model Amazon will come out with, we do see that this device can last for years and years—eliminating the need for a traditional television subscription from a cable or satellite provider.

Apps load faster, screen transitions are smoother, and you can play games with less chance of lagging and glitches.

With the Alexa Voice remote and the option to use hands-free voice control with any device, you literally don’t have to lift a finger to change the channel. The television gods would be proud.

The All-New Fire TV is designed with a “Wi-Fi first” approach. If you’re like us, you’d rather not stare directly at unsightly ethernet cables hanging around. Amazon opted for “out of sight completely” with the All-New Amazon Fire TV.

No ethernet connection without an adapter

With the latest generation, Amazon pared down the Fire TV to simpler features, which is good for Wi-Fi–only users, but a little more hassle for ethernet users. The box doesn’t have an ethernet connection, you have to purchase an adapter.

The basic difference between using Wi-Fi instead of ethernet is more about reliability and less about actual speed. While Wi-Fi makes the unit more portable and probably works for most people that way, it will ultimately “feel” faster and smoother to use ethernet. We recommend getting the adapter.

If you were hoping to transfer files easily between your computer and the All-New Amazon Fire TV, you’re limited. Whereas the Fire TV 2 allowed you to blend your digital storage between streaming and microSD storage, the All-New Amazon Fire TV lacks this option, or any way of rigging up an adapter to do so. If you’ve downloaded shows or pictures that you want to use on a microSD, this is definitely a con.

An easy substitute for traditional cable 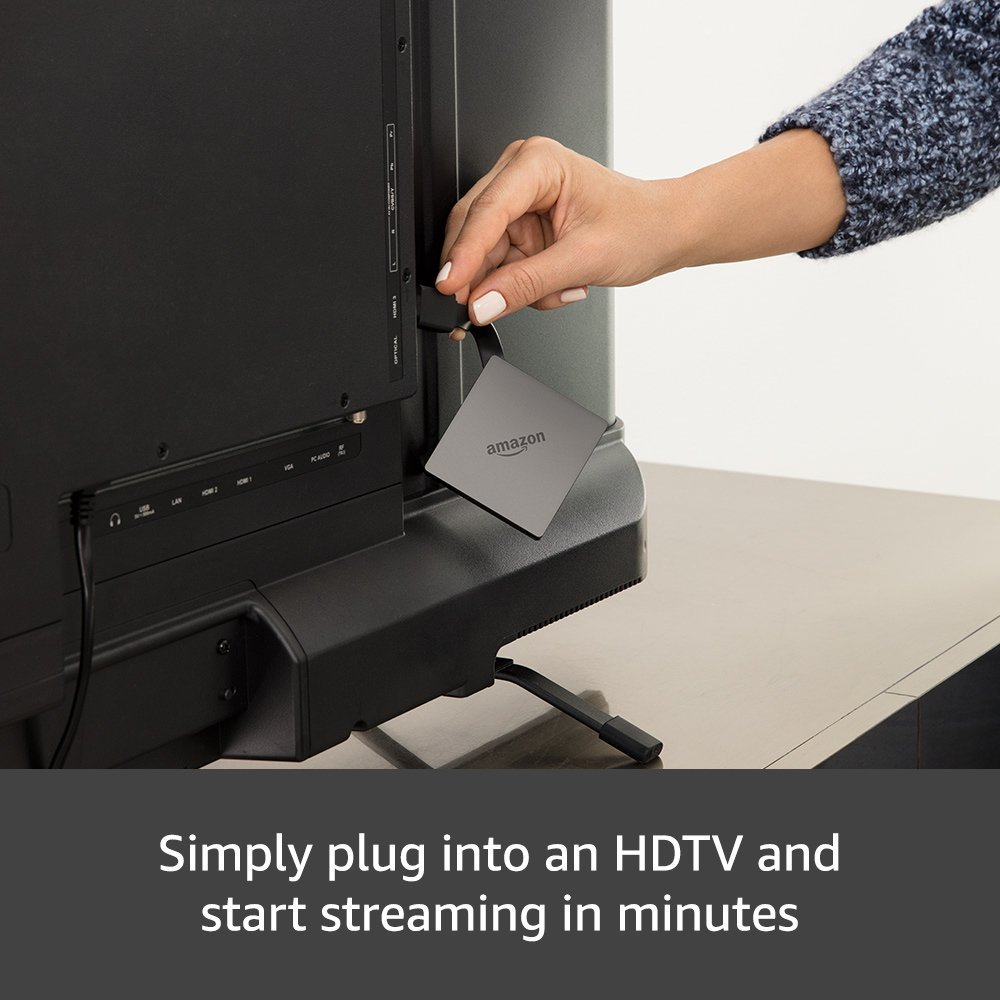 We really like using our voice to search for shows, especially when we don’t have a keyboard and are forced to use single directional typing.

Alexa isn’t perfect, but because it’s one of the most popular services, we’ve seen improvement over the years and would expect the service to be one that just gets better and better.

Being able to use the included remote OR the Echo devices gives uses more options to control TV, which we appreciate. The lazier we can be mid-binge-watching coma, the better.

Better resolution than some TVs can handle

Amazon Fire TV may have a higher resolution than your TV, but that’s not a bad thing. You won’t see any negative side effects, and if anything, it’ll give you a reason to splurge on a new 4K TV so you can catch shows like Planet Earth 2 or the NBA Finals in all their glory.

Hanging out with Amazon Fire TV

Amazon Fire TV stays out of the way by attaching to the back of your TV with an HDMI connection. While we can see the potential for someone’s setup to make the Fire TV dongle visible from the side or bottom, it’s still an attractive design.

Looking for music with Amazon Fire TV? Link up to the following services:

Although we wouldn’t say the Amazon Fire TV could replace a full-blown gaming console like PlayStation or XBOX, it does have some fun stuff to mess around with, including games like The Jackbox Party Pack, Sonic The Hedgehog 2, or the country’s most played game, Minecraft. For parents with kids, this can be an easy way to hang out together.

How much does Amazon Fire TV cost?

That All-New price is very nice.

The All-New Amazon Fire TV costs closer to $70. This is better than $100, which is what the previous generation cost. If you want to save money, Fire Stick TV is almost half the price at $39). This one-time price isn’t too bad compared to how much you can spend with your family at the movies.

Amazon is usually a pretty good deal, especially for Prime Members who get free shipping. Even if you need the ethernet adapter, the All-New Amazon Fire TV is still cheaper than the Amazon Fire TV 2. And either way, you’re still getting away for far less money than traditional cable.

Need more options? Check out these other streaming devices. 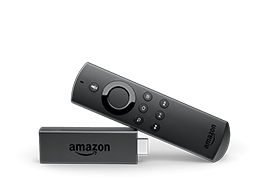 We’d say opting for the cheaper Fire Stick TV from Amazon is a good way to go. You’re not losing that much processing power, especially if you only want to stream from Amazon Prime Video, Netflix, or Sling TV.

It’s a little smaller, which may be more convenient and portable. Recently, we house sat for someone and weren’t sure if they’d have Netflix working or not, so we pocketed our Fire TV Stick and picked up where we left off in Orange is the New Black.

We can’t quite blame loyal Apple fans—we’ve used the Apple TV alongside our iPhones for years, and it still works when we want to catch up on Stranger Things 2 or Lady Dynamite. This may be the better option if you want to keep everything integrated seamlessly across all your iOS devices.

Get this if you’re already a proud member of the Apple cult (like some of us). Otherwise, you’ll get away cheaper with the Fire TV. 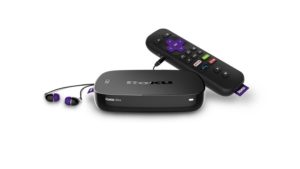 Roku was one of the first streaming devices, and still wins the hearts of many.

Roku runs about $90 at the time of this writing, and it has 4K HDR, too. All things considered, we liked the hardware and interface of the Amazon Fire more than the Roku.

Compared to other streaming devices, FireTV has a fast processor, high resolution, and a good price. If all this sounds good, get your Amazon Fire TV over here.

Fire Stick vs. Fire TV
What We Like
What We Don't Like
User Experience
Cost
Similar Products
The Bottom Line