Harassment, identity theft, and impersonation, oh my! These three online crimes troubled Americans the most in 2019. 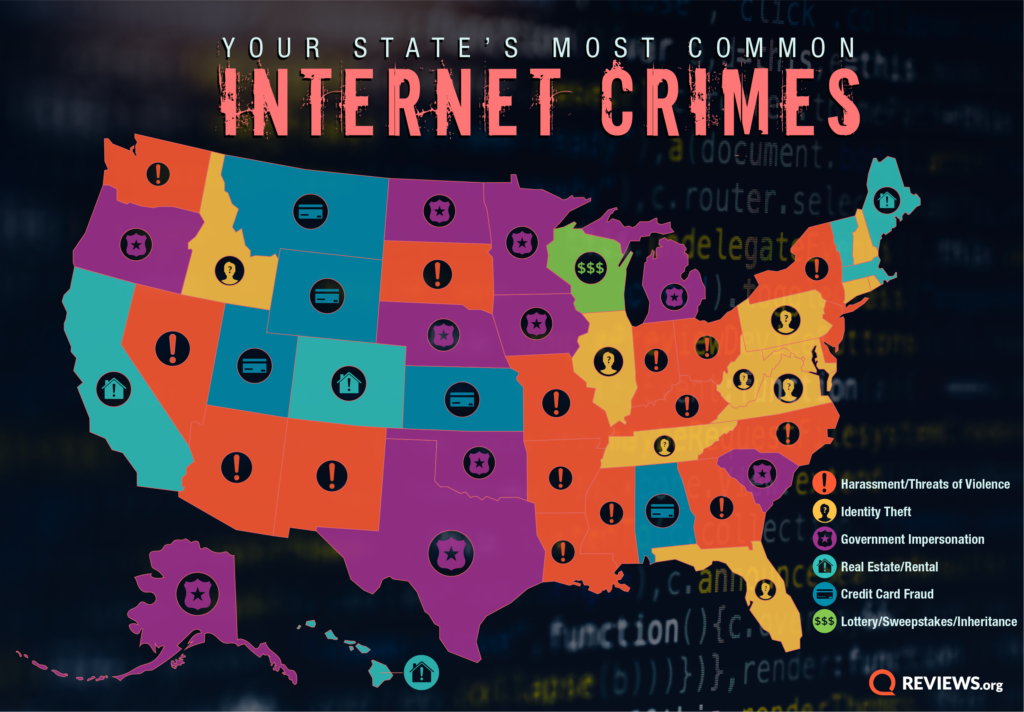 Sure, sometimes we joke about the Prince of Nigeria and his infamous email scams . . . and even though he never emailed back, we hope he’s okay.

But the truth is there are many internet crimes that are far more sly. And sometimes even smart people fall for them.

But as they say, knowledge is power. So we took a look at the most common internet crimes as reported by the FBI’s Internet Crimes division and created a list of tips to keep you safe online.

The three most common internet crimes by state

1. Online harassment and threats of violence

What is it? Threats, cyberbullying, abuse, doxxing (publishing private info online), spreading rumors. Any way you put it, it all amounts to online harassment.

Chances are you’ve run across an internet troll or two during your time online. And while trolls like to get us riled up with controversial comments and ridiculous statements, they’re much less scary than those who use the internet to harass, abuse, or threaten others.

When we look at the states with the highest occurrence of online threats and harassment, Nevada is home to far more victims than any other state. Could the prevalence of casinos, nightlife, and high-stakes rollers attract more online predators?

We’re not sure, but no matter where you live, if you ever feel threatened or harassed online, there are a few things you can do.

1. Strengthen yourself with support

Cyberbullies and harassers rely on you to stay silent so they can keep hurting you. Stay strong and seek help from friends, family, and online communities like HeartMob. HeartMob can connect you to others who know exactly what you’re going through because they’ve experienced it themselves.

2. Put the harasser or bully on ignore

Though it may be tempting to defend yourself or ask them to stop, your best bet is to ignore your harasser. By responding, you may open the door to more harassment. But ignoring the harasser doesn’t give them an opening to continue.

You may need to show evidence of the abuse or threats to law enforcement or a lawyer. Either way, it’s a good idea to take screenshots and save chat logs or emails so that you don’t get into a “he said, she said” type of argument with your harasser.

This may mean you ignore their calls, block their number, delete their emails, or block them on social media. Just be sure you collect any and all evidence before you hit “block” or “ignore.”

What is it? More than likely, you’re already familiar with identity theft, thanks to the Equifax data breach in 2017 and the Yahoo breaches in 2014 and 2017. But in case you need a quick refresher, identity theft is anytime someone steals your personal information and uses it without your permission. That includes your name, personal identifiers like your social security number, or account information.

The internet makes it easy for us to be anyone we want, and while most of us innocently run around as video game heroes or help others on forums, some are out to take advantage of others.

And if you want to find the hotspot for identity theft, then you’ll need to take a trip down south to Florida. The sweet, sunny home of snowbirds and gators is also home to a large number of identity theft victims.

We hope our fellow Floridians change their passwords and secure their online documents to help combat this internet crime. Other ways to protect yourself from identity theft include the following:

Did you know there are 20 different types of identity theft?

Your account information and social security numbers aren’t the only personal information identity thieves might be targeting. Protect yourself through awareness and take a look at Experian’s list of the 20 types of identity theft, which includes new types of theft like synthetic identity theft and internet of things (IoT) identity theft.

1. Put a freeze or fraud alert on your accounts

You can give your bank and the credit reporting agencies a heads up that your identity has been stolen. This can help keep your bank accounts free of unwanted charges and avoid changes to your credit reports.

You’ll want to check with your individual bank to find out how to put a fraud alert on your accounts, but here’s where you can learn more about freezing credit reports with the three major US credit bureaus:

2. File a police report—and keep copies of it

In case an identity thief tries to use your personal information to commit crimes, it’s important to file a police report to protect yourself. You’ll also want copies of that police report to send to the credit bureaus, insurance provider, or doctor’s office to show that you’ve been a victim of identity theft.

3. File complaints with the Federal Trade Commission (FTC) or IRS

Similarly, if you’ve been a victim of tax ID theft, you should contact the IRS. This can include someone filing a fraudulent tax return under your name or even wrongfully claiming your dependent as their own on their tax return.

What is it? Ever been asked for money by someone who seems legit? If you were told they’re a government official, chances are you’ve been targeted by a government impersonator.

Our first thought when we read about government impersonators was of “stolen valor,” or when someone pretends to be a highly decorated veteran (whether they served in the military or not).

But government impersonation can take on many forms. The easiest way to spot it is if someone claims to be a government official and demands gift cards or other forms of payment to cover alleged debts. Some impersonators also promise money in return for a payment on “taxes” or other things.

We thought Washington, DC, Virginia, or another area where government agencies abound would top this list. And wouldn’t you know it, DC has the highest number of government impersonation cases. If you’re ever in doubt about whether someone is an actual government employee, here’s what to do.

Just like you shouldn’t click a link in an email, you shouldn’t automatically trust that a caller is from the agency they say they’re from. Your best bet is to verify that the agency actually contacted you by looking up the official number and calling them. And, if they did call you, ask why.

2. Be suspicious even when things look or sound official

Most of us are pretty trusting and like to believe people are mostly good, and when an email is all decked out with official logos or a phone call comes from someone with an official-sounding title, it can be easy to feel a sense of security. But even caller ID can be faked, so it’s better to be safe than sorry.

Here’s the thing: no government employee or agency will ever threaten you, promise money for a favor, or demand payment.

What is it? Real estate and rental fraud can take on some different variations. For example, a renter or borrower may put fraudulent information on their application to try to get a lease or purchase a title for a house.

On the other hand, a property owner may advertise false or misleading information in order to trick others into renting or buying the property.

What is it? Ever had your credit card or credit card information stolen? We have, and it’s not fun to dispute fraudulent charges. (And come on, who needs $700 worth of stuff from Amazon?)

What is it? Who wouldn’t want to get a phone call that they’ve won the lottery or a long-lost relative has left them a sum of money?

Certain fraudsters know that, and they like to take advantage of your surprise and excitement by telling you that you’ve inherited or won some money. But the catch is you’ll need to pay them a “tax” or “fee” to get your award.

If this sounds fishy, it is. This is how lottery, sweepstakes, and inheritance schemes take advantage of people.

The bottom line: 10 resources to protect yourself online

It’s never right that some people take advantage of others. If you ever find yourself the victim of an internet crime or another scheme, there are lots of resources that can help you out, including but not limited to the ones we mentioned here.

And remember, if something sounds too good to be true, fishy, or just sketchy, it’s better to be safe than sorry.

The most common internet crime in every state

How’d we figure out which states had the highest number of internet crime occurrences? We analyzed a subset of crimes from the FBI’s 2019 Internet Crime Complaint Report and determined which online crimes were the most common.

We focused on crimes that targeted victims at a state level rather than a national level, so our study doesn’t look at crimes like non-payment and non-delivery, extortion, personal data breaches, spoofing, or business email compromise (BEC) and email account compromise (EAC).

We found the following list best represents the most common internet crimes targeting users on a state level:

We then broke down how many times each type of crime was reported per 100,000 people in each state to find out which crimes were most common in which states.