It’s 2021, and 27.6 million American households still don’t have home internet. That’s more households without internet than the total number of households in 13 states.

Lack of high-speed internet access is a monumental issue in our country, and the disparity was brought into full focus in 2020. And it’s a problem that’s not going away.

Key findings: Number of US households without internet

To get a clearer picture of the US digital divide, we combed through data from the latest US census survey to pinpoint how our country and individual states are faring when it comes to residents having equal access to high-speed home internet.

22.5% of US households don’t have home internet

What would you do without internet at home? That’s the question 27.6 million households have to answer on a daily basis. Yes, almost a quarter (22.5%) of US households use public Wi-Fi or other means to hop online—a modern-day travesty considering that more and more of daily life takes place on the internet.

The number of households without internet is greater than the total number of households in 13 states combined, a personally unfathomable amount since I spend a majority of my time online every day and can’t imagine being stuck offline. Without an internet connection, I’d be unemployed and lacking access to educational resources that could improve my employment opportunities. 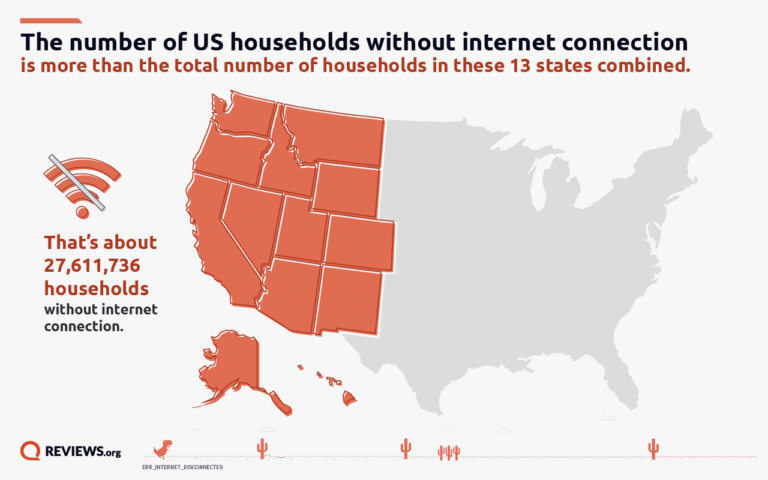 Our country’s connectivity problem doesn’t end there: 265,331 households still use dial-up to connect to the internet.

You know, dial-up—the internet connection that was sold through AOL CDs back in the 1990s and reaches peak speeds of 56 Kbps. At that speed, it would take 7 minutes and 30 seconds for your computer to download and display this GIF of a dog wiggling its ears. (Worth the wait? Yes.)

Of course, some states are doing better on the connectivity front than others. Namely, Utah, Colorado, and California boast the highest percentage of households with a home internet connection.

But Mississippi, Arkansas, and Alabama residents are more likely to get an internet connection away from home, since those three states are the least-connected.

The least-connected states are mostly clustered in the South

Mississippi, Arkansas, and Alabama top our charts for the least number of connected households. 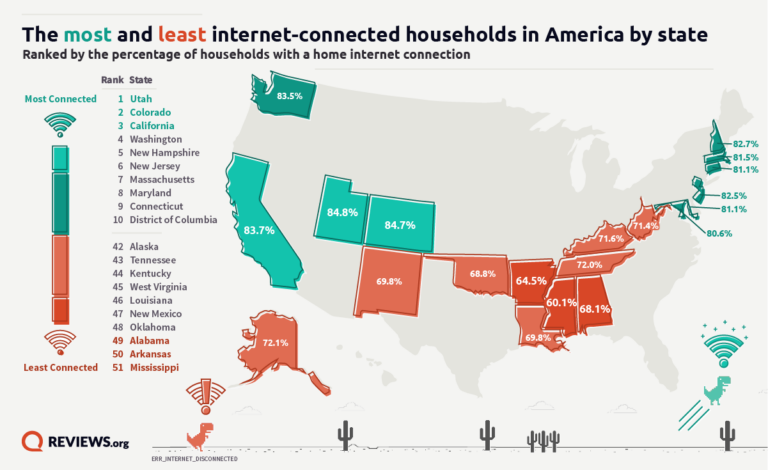 And along with a large number of households that don’t have home internet, there are a couple of other common issues these 10 least-connected states face: a large rural population and a high rural poverty rate.

The 10-least connected states in the US

These are the most- and least-connected counties in Mississippi, Arkansas, and Alabama

Some counties in our top 3 least-connected states fared better than others:

Along with fairly large rural populations (except perhaps Louisiana), nine of these 10 states all have a higher rural poverty rate than the national average of 15.3%.1 The poverty rate can influence which telecom providers build in certain areas—if any at all.

Broadband is a privatized industry, so naturally internet service providers (ISPs) need to keep their bottom line in mind when they plan out infrastructure expansions. And if an area has fewer people and a high poverty rate, that’s less incentive for a company to expand or improve its infrastructure there.2

Seniors and students tend to be the most affected by a lack of internet at home. Older Adults Technology Services, an advocacy group and affiliate of AARP that focuses on the intersection of technology and older adults, reported that two in five seniors don’t have internet access. And Edweek says that 9–12 million students still don’t have internet that supports remote learning at home.

As we mentioned before, rural America also faces hurdles when it comes to getting high-speed internet. President Biden noted that 35% of rural residents still don’t have access in an April 2021 address to Congress.

Thankfully, rural internet options are growing. New technology like fixed wireless and mobile home internet might be able to bridge the gap and bring our rural residents into the online fold.

Utah, Colorado, and California are the three most-connected states in the US.

The 10-most connected states in the US

Two of the 10 states with the largest percentage of households with home internet have literally no rural population. Both New Jersey and Washington, DC feature only urban metros, and therefore there’s no rural poverty rate data for either one.

This further proves that ISPs follow the money, and that residents of states with smaller rural populations and lower rural poverty rates have a better chance of acquiring and affording a home internet connection.

These are the most- and least-connected counties in Utah, Colorado, and California

These counties reported the most and fewest households with home internet:

How many Americans rely on dial-up or satellite internet?

Over a quarter million Americans still use dial-up internet, and just over 8 million rely on satellite internet.

US households with home internet by connection type

That so many people still use dial-up is concerning. A 56 Kbps connection takes an average of 1 minute and 45 seconds to load some of the most-visited websites in the US, like Google.com, Pinterest.com, and WellsFargo.com.3

By comparison, the average load time for a website using our Xfinity cable internet connection took an average of 1.42 seconds for those three sites using the Pingdom website speed test.

Of the main two satellite ISPs, you could get speeds as slow as 12 Mbps—below even the FCC’s definition of “high-speed internet”—up to 100 Mbps. But you’ll pay a pretty penny of $150–$200 a month for those top speeds. That likely makes satellite a no-go for those living in rural areas with high poverty rates.

And though the census survey didn’t break down their report further to detail DSL versus cable versus fiber internet service at home, BroadbandNow estimates that 91% of the US population has access to DSL.4

That so many people rely on aging DSL infrastructure to gain internet access is also a problem. And DSL providers don’t seem too keen on paying to upgrade this infrastructure, either, leaving customers empty-handed in terms of quality internet service—or even safe, well-constructed infrastructure.

What type of internet is available in your area? What kinds of speeds can you get? Try out our free zip code tool and let us know in the comments.

Where do we go from here?

While the Federal Communications Commission may finally clean up their map data under acting chairwoman Jessica Rosenworcel, that still doesn’t fix the problems that led to this jaw-droppingly high number of homes without broadband.

It’s a good start, but we still need to address the lack of competition and consumer choices, legislature that blocks municipal internet service, and the habit of overlooking sparsely populated rural areas by telecom behemoths.

While most of us consumers still don’t have much choice when it comes to internet access and our rural brethren even less so, municipal ISPs and programs like the Rural Digital Opportunity Fund (RDOF) may help bridge the gap. (Even though the RDOF has rightly earned criticism.)

Many cities have chosen to invest in broadband infrastructure instead of waiting for big telco to do it on its own terms. And organizations like the Institute for Local Self-Reliance (ILSR) and Coalition for Local Internet Choice (CLIC) put together guides for communities who are ready to advocate for themselves and improve connectivity.

As more critical eyes are turned to the state of internet connectivity in the US, we can only hope that the digital divide will shrink.

Each state and county is ranked on the percentage of households who subscribe to either a broadband, dial-up, or satellite internet connection.

Want to see how all 50 states plus DC compare?

Here’s a full view of US home internet connectivity at a state-by-state level. We ranked each state by the total percent of households that have either a broadband (cable, DSL, or fiber), dial-up, or satellite internet connection at home.

We did not include households that reported using a cellular data plan or other type of internet service at home.

US states ranked by % of households with home internet service