There are a few too many things wrong with TunnelBear to recommend this bearable VPN over its key competitors.

Getting noticed in the virtual private network (VPN) space is tricky when you’re not a big-name provider like NordVPN or ExpressVPN. In order to compete, VPN services that aren’t household names tend to have a point of difference. For example, Hotspot Shield offers killer speeds. CyberGhost has stacks of countries. And Surfshark offers unlimited simultaneous device connections.

Meanwhile, TunnelBear’s biggest point of difference is a viable free version and a cutesy user interface. 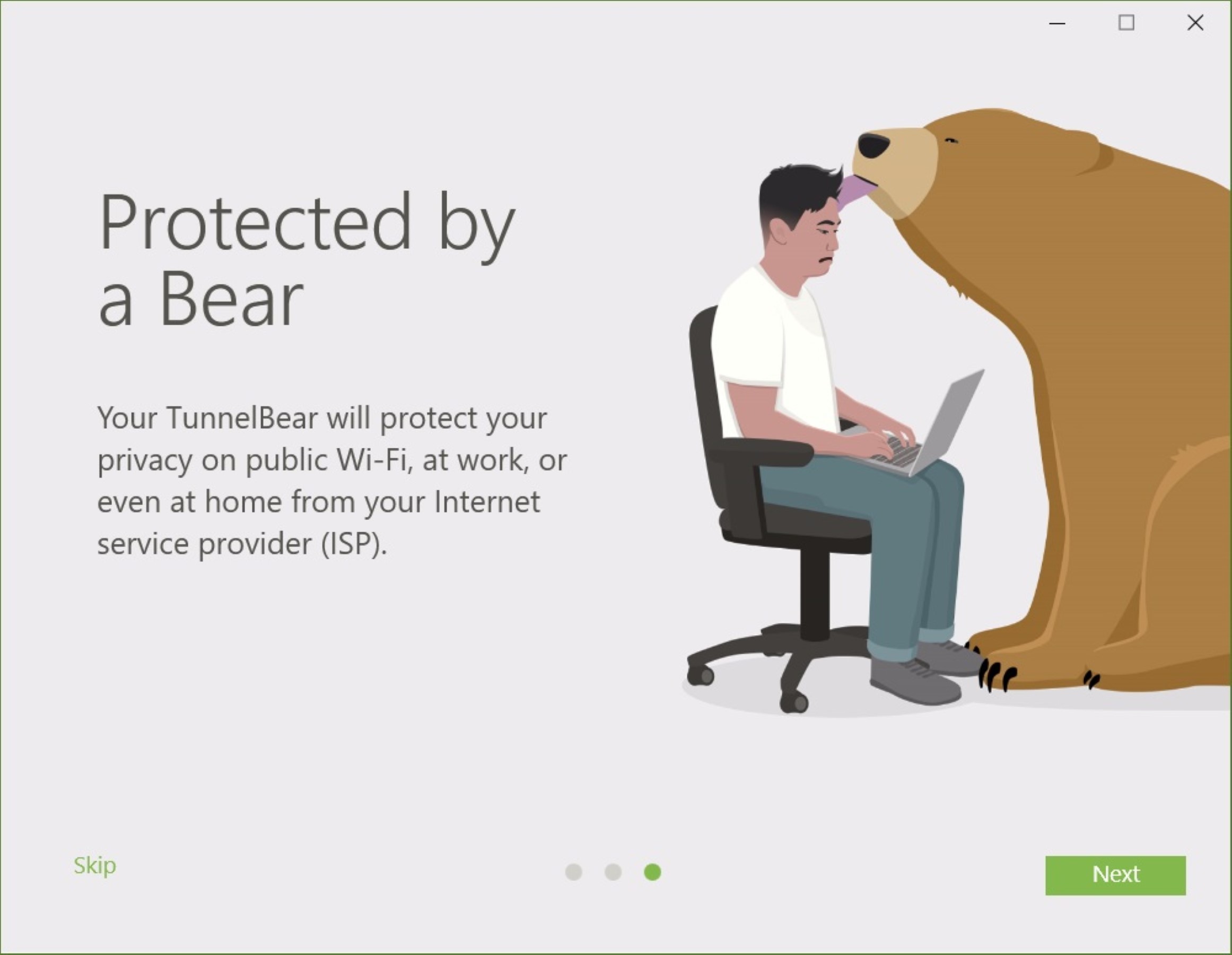 Whether you’re after a monthly subscription or eager to save dollars by paying upfront for overall cheaper monthly pricing, TunnelBear has reasonable pricing. The monthly cost is below $10, the annual price competes with the more competitively priced bigger name alternatives, and the three-year subscription has the best overall value. Check out the different TunnelBear pricing options below.

There are cheaper monthly (Mullvad VPN) and annual (Windscribe VPN) subscriptions out there, but TunnelBear has the third-best pricing for monthly pricing (equal with IPVanish and VPN Unlimited) for the 13 VPNs we’ve reviewed on the site. It also has one of the best other pricing models (usually beyond annual) of our reviewed VPNs. That said, you can only pay with a credit card and there were no other payment options like PayPal.

Unfortunately, TunnelBear doesn’t have a money-back guarantee like most other VPN providers, instead opting for refunds on a case-by-case basis. While disappointing, this is offset by the free version of TunnelBear which isn’t as fully featured as its premium service but does offer 500MB of secure browsing if you want to try it before you buy.

My experience with TunnelBear VPN has been all over the place but started out great with a painless sign-up process. This is where you’re first introduced to the cutesy bear theme, complete with bear puns and animations, which persists after you install the TunnelBear software or app. Like NordVPN, TunnelBear uses a world map to indicate which part of the world you’re connected to.

Unlike NordVPN, TunnelBear has a genuinely charming bear animation that digs from your current location to where you want to be connected. The Android app is a bit buggy in that the connection switch concerningly sometimes shows as disconnected when you’re actually connected. But at least on the smartphone app, you can easily use your finger to scroll to a different location.

On PC, you can click and drag, but when I first started using TunnelBear, it was only partially rendering in fullscreen mode, which led to excessive dragging (not to mention hitting the settings cog drags you out of fullscreen). This stopped happening in later tests. The easier way to connect is by using the drop-down menu on PC or the pop-up menu on Android.

This is where you’ll find the 49+ countries that TunnelBear claims to have servers in, which was actually 49 by my manual count, organized by Fastest (TunnelBear auto picks the closest server), United States, Canada, United Kingdom, and then the rest of the servers are listed in alphabetical order. TunnelBear was able to identify Australia as the nearest server on PC but got confused on Android after I connected to a New Zealand server, so it was selecting New Zealand as the fastest server instead of Australia.

Speaking of servers, TunnelBear is staying mother bear on how many it has, and there’s also no way to manually switch servers, so you’re at the mercy of TunnelBear’s automatic selection. Connecting or switching servers takes up to 20 seconds, which is a lot longer than the handful of seconds most other VPNs I’ve tested take to connect, and led to some massive playback pauses in my music-streaming tests.

More concerning is that TunnelBear only occasionally plays nicely with digital gaming services on PC, and while the recommended workaround feature, GhostBear—an add-on that makes encrypted data appear more like regular traffic—did fix the digital platforms, it made Slack stop working, certain webpages were slow to load. Eventually, the feature stopped working. For those keen to use TunnelBear for torrenting, files refused to download or upload in my tests. 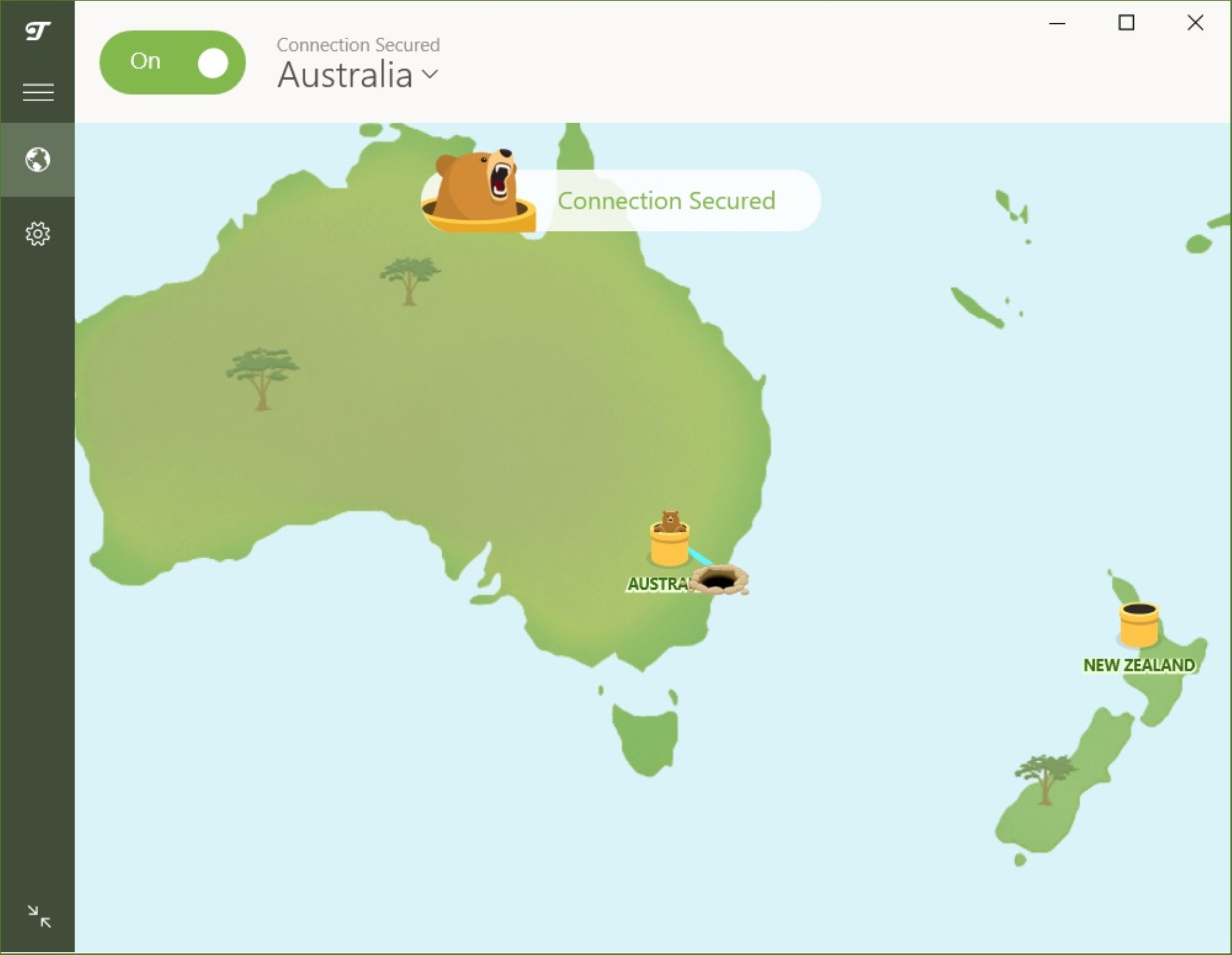 A single TunnelBear VPN subscription supports up to five simultaneous connections, which is on par with ExpressVPN and Hotspot Shield, but is left in the dust by the likes of PureVPN, which has up to 10, or the unlimited simultaneous connections allowed by Surfshark VPN and IPVanish. There’s also only a functional range of supported devices, which includes Windows, MacOS, Android, and iOS, but there are also TunnelBear browser extensions via Chrome, Firefox and Opera. TunnelBear offers limited Linux support.

Whenever you connect to a server via a VPN, you can expect some degradation in terms of your internet speeds. Latency goes up, while download and upload speeds go down. This may be normal, but better VPN services have a minimal impact when connecting to servers in the same country, while others only have a comparatively light effect for international locations like the US.

The table below has test results from my Superloop NBN 100/40Mbps Fibre-to-the-Curb home internet. These results should give you an idea of how TunnelBear performs when connecting to the US and the UK during the middle of the day compared to base speeds when TunnelBear isn’t running.

The single-digit impacts to Australian download and upload speeds, as well as a minor 2ms jump in latency, are all impressive. Speeds take a much bigger hit when connecting to the US, even if the latency spike is reasonable. Compared to my recent IPVanish review update, TunnelBear’s US speeds are okay, but they don’t hold a candle to Hotspot Shield. Similarly, the UK speeds and latency are decent but not worth writing home about. 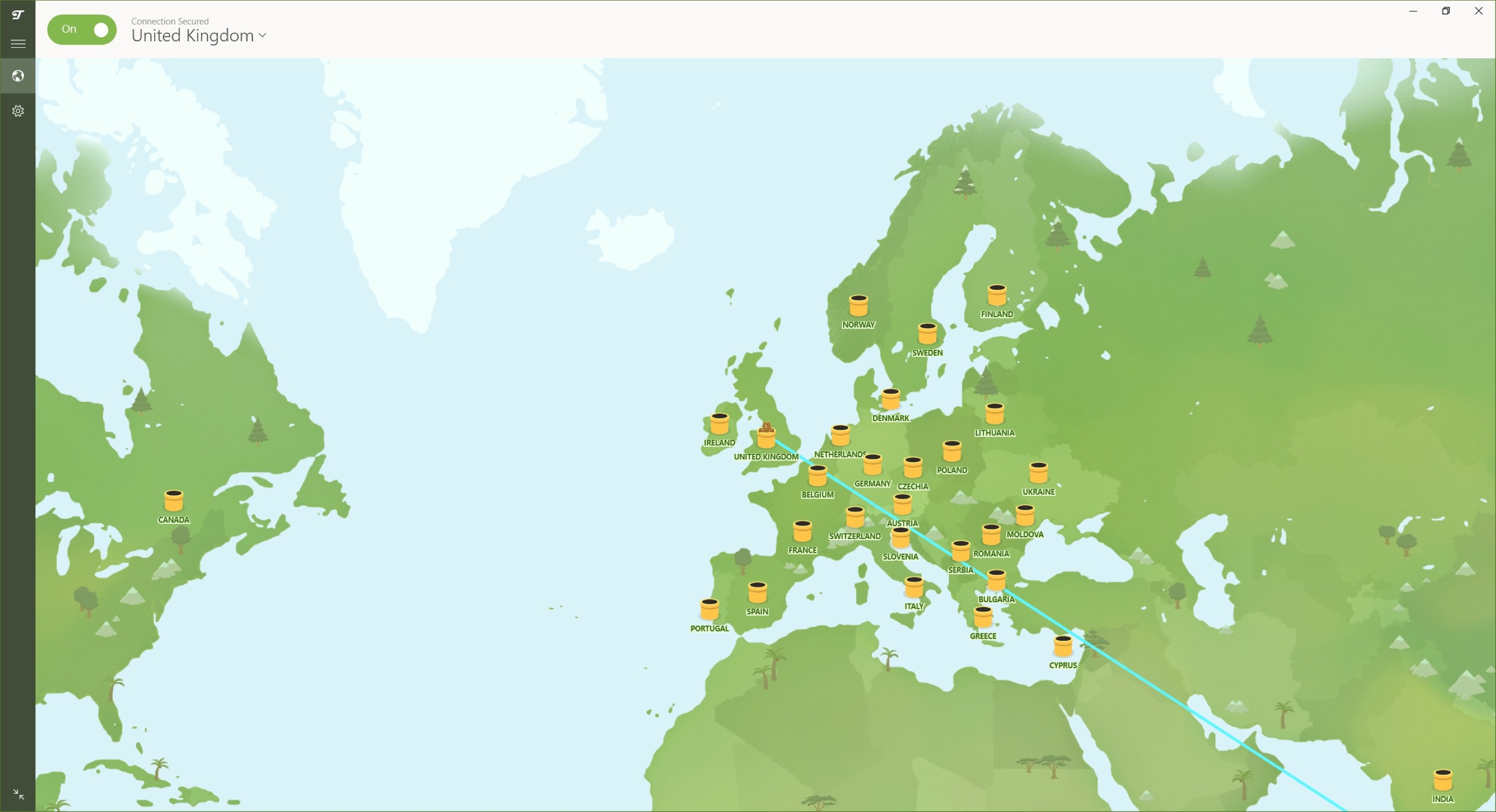 Some people use VPN services to stream geoblocked content and services. While this usage does run the risk of violating the terms and conditions of the streaming services (and possibly the VPN), it’s a viable way for accessing content from, say, the US and the UK when you’re in Australia. The table below shows the results of TunnelBear when it comes to streaming a handful of popular US streaming services, one UK service, and a couple of Australian options, all of which are decent at detecting and blocking VPNs.

For those looking to TunnelBear VPN for streaming the Netflix US library, it works really well. TunnelBear was fast to load and buffer content from HBO Max and Hulu, while Peacock worked, albeit with slower buffering. Unfortunately, BBC iPlayer sniffed out TunnelBear when connected to a UK server, and even though Kayo content loaded while connected to an Australian server, it came up with a VPN warning when I tried to play content. Similarly, Stan refused to log in because it detected TunnelBear.

The table below uses the best-case 25% download speed variance when connecting to a TunnelBear US server and the 37% change for a UK server to give you an idea of how well you can expect the VPN service to perform when handling multiple streams. The average typical evening download speeds (TEDs) are used to determine the evening download speeds you can expect from TunnelBear, based on your connection type. Meanwhile, the three columns on the right show how many simultaneous streams you can run (Netflix allows up to four, while Hulu and BBC iPlayer both technically can have unlimited streams).

TunnelBear doesn’t have a lot in the way of extras. It does have split tunneling—a feature that lets you determine which traffic is protected/slowed by the VPN, and which is not—but it’s limited to Android devices (running Android 5.0 or later). There are a couple of fancifully named features like VigilantBear, which blocks all traffic during connection and reconnection (effectively a kill switch), and GhostBear, which is built to make encrypted data appear as regular data but, as I outlined above, wasn’t a reliable feature. On the positive front, Chrome users can take advantage of the free TunnelBear ad-blocking extension. 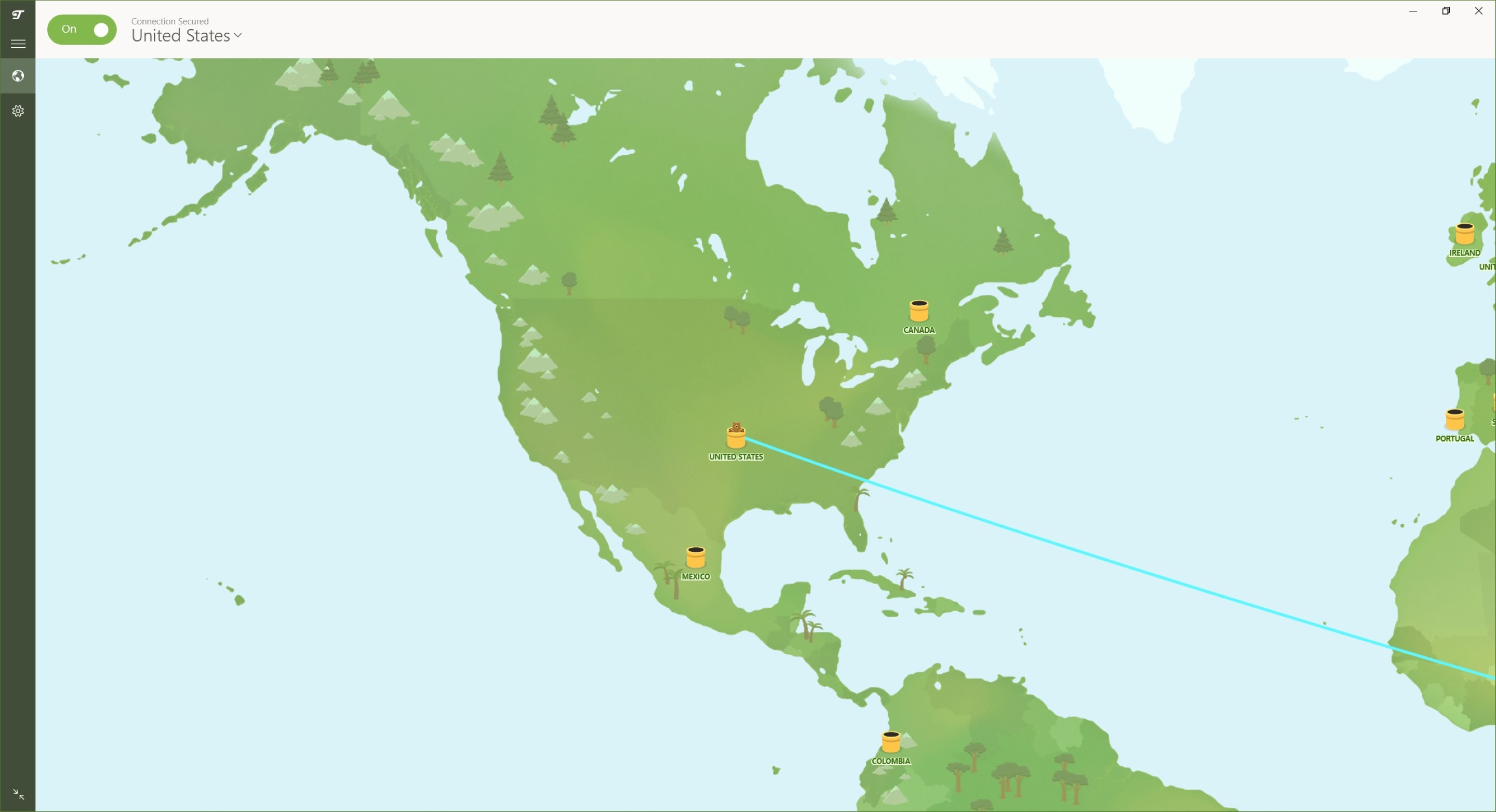 TunnelBear has cheaper monthly pricing than NordVPN ($9.99 vs $11.99) identical annual pricing, but better overall pricing if you opt for a $120 three-year subscription compared to NordVPN’s two-year subscription ($95.76). While NordVPN doesn’t have a free version, it does have a 30-day money-back guarantee.

TunnelBear has an unknown number of servers in what it claims to be 49+ countries, while NordVPN has 5,440 servers in 59 countries, plus it supports six simultaneous connections compared to the five from TunnelBear. Both VPN services have a zero-logging policy for greater peace of mind, but NordVPN additionally offers an included Smart DNS service and anti-malware, plus its split tunneling isn’t restricted to a single device.

NordVPN also boasts faster downloads and uploads for US and Australian servers, and ever-so-slightly faster latency (153ms vs 154ms for the US and 6ms vs 7ms for Australia), but TunnelBear has better upload speeds when connected to US servers. Even though you’ll pay more, if you’re weighing up between the two VPN services, you’re better off going with NordVPN over TunnelBear.

Should I buy TunnelBear VPN?

TunnelBear VPN isn’t an essential VPN service and nor is it a major contender for the dominance of our current top-five VPNs. If you’re curious, try the free version to see if you like it enough to buy a subscription. You should find decent Australian speeds and it is admittedly great for US streaming services. That said, TunnelBear VPN is slow to connect and switch servers, disrupts services, doesn’t let you manually select servers, and the lack of a meaningful money-back guarantee all work against it.