Mullvad is Swedish for “mole”, and despite being light on features, it’s a VPN service we dig.

You likely know you need a virtual private network (VPN) service to keep your internet connection secure. But with so many options out there, from the high server count of CyberGhost VPN to the unlimited devices of Surfshark VPN, it’s easy to be intimidated by so many choices.

This is where Mullvad VPN comes in to simplify the process. 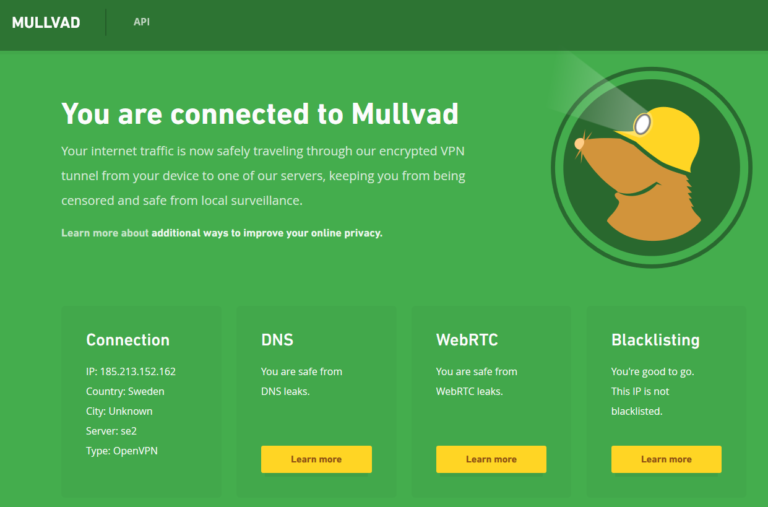 Mullvad seeks to simplify this process by only offering a flat $5.50 monthly fee, plus there are plenty of payment options.

Of the 13 VPN reviews we’ve done, this pricing model is a rarity because every other VPN service either offers annual or other pricing across six months, multiple years or even a lifetime subscription. On one hand, Mullvad VPN has a pretty cheap monthly pricing of all the VPNs we’ve reviewed. On the other, those willing to pay for longer periods of time won’t find any discounted value here and should look at one of the options below.

While payment is straightforward, the first quirk of Mullvad VPN comes when after you sign up. Instead of creating a password associated with your email address username, Mullvad assigns you a unique account number. This is a bit pesky and requires you to jot it down somewhere (ideally, somewhere secure) in order to use Mullvad across devices.

While it is trickier to recall than a username and password, and it doesn’t play as nice with password managers that seek out a username/password combo, it does mean that your VPN connection is protected at an account level because there’s no need to supply personal information, not even an email address. Couple this with Mullvad’s zero-logging policy, and this is a VPN service that takes user privacy very seriously.

How to use Mullvad VPN

The simplification returns when it comes to actually using Mullvad VPN. While neither the Windows software nor Android app that I tested for this review are much to write home about in terms of their design, they get the job done in a straightforward way. Mullvad starts by recommending Sweden (Mullvad’s home base) as the default connection option, but it’ll remember where you last connected to afterwards.

Simply click on the country name, switch to one you like, then head back to the main screen and tap on ‘Secure my connection’. About eight seconds later you should be online, and disconnecting only takes a few seconds with only minor interruptions to real-time internet services (like music streaming) in my tests. Back on the location page, click or tap on the down arrow next to a country to select locations, and then use the down arrow next to the location to find specific servers.

There isn’t any information beyond the server name and the at-a-glance logic that green means a server is good to use and red means it’s offline. At the time of writing this review, Greece’s only server was offline, which isn’t great considering Mullvad only has 37 country options, which makes it the second-lowest count behind Norton Secure VPN for our VPN reviews, and there were only 766 servers. For context, while TunnelBear doesn’t say how many servers it has, the next lowest server count of the VPNs we’ve reviewed is the 1,600+ from IPVanish. 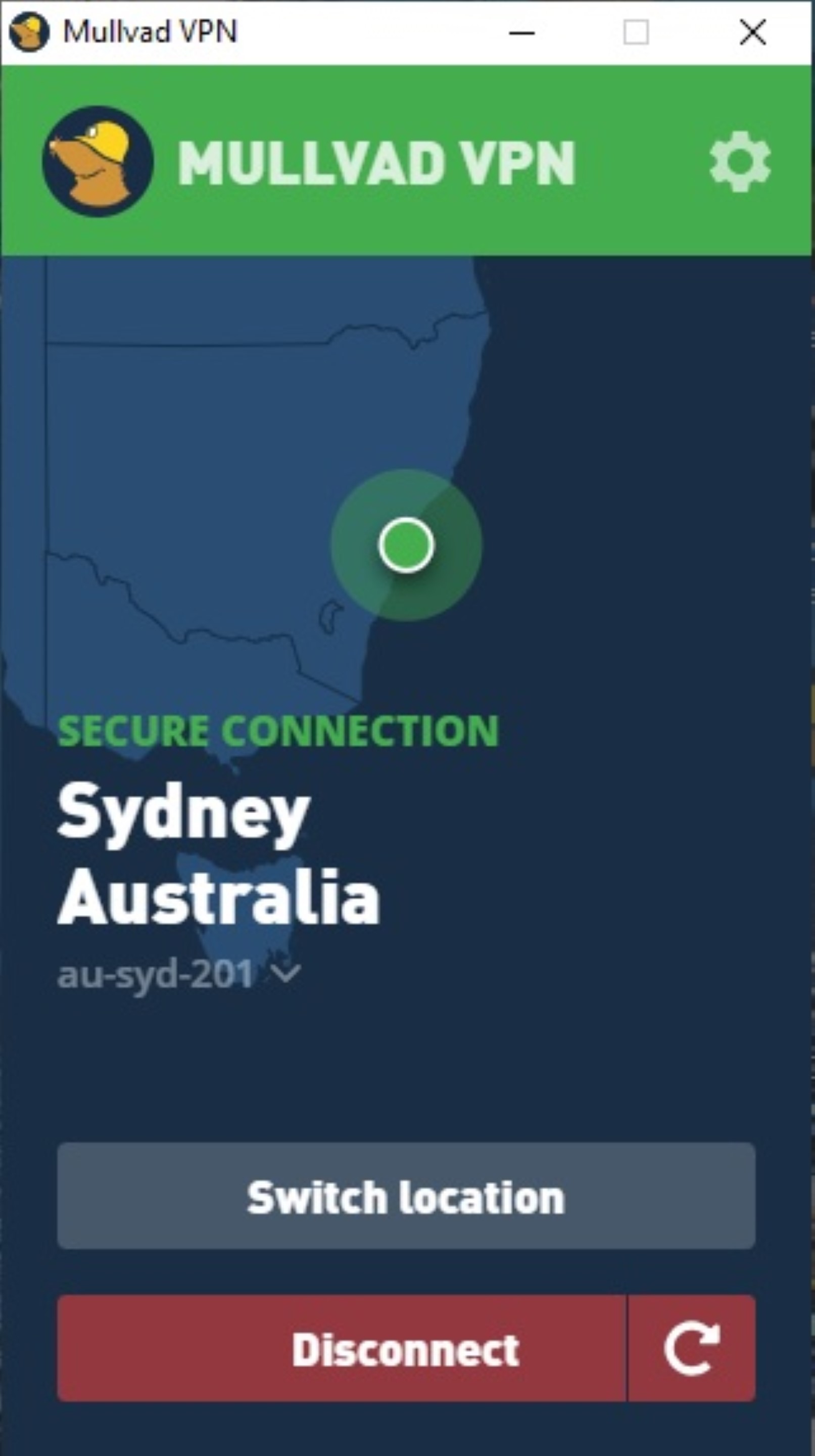 Mullvad VPN also supports any other device that allows for an OpenVPN or WireGuard protocols, and you can find configuration files for both on this Mullvad VPN support page. 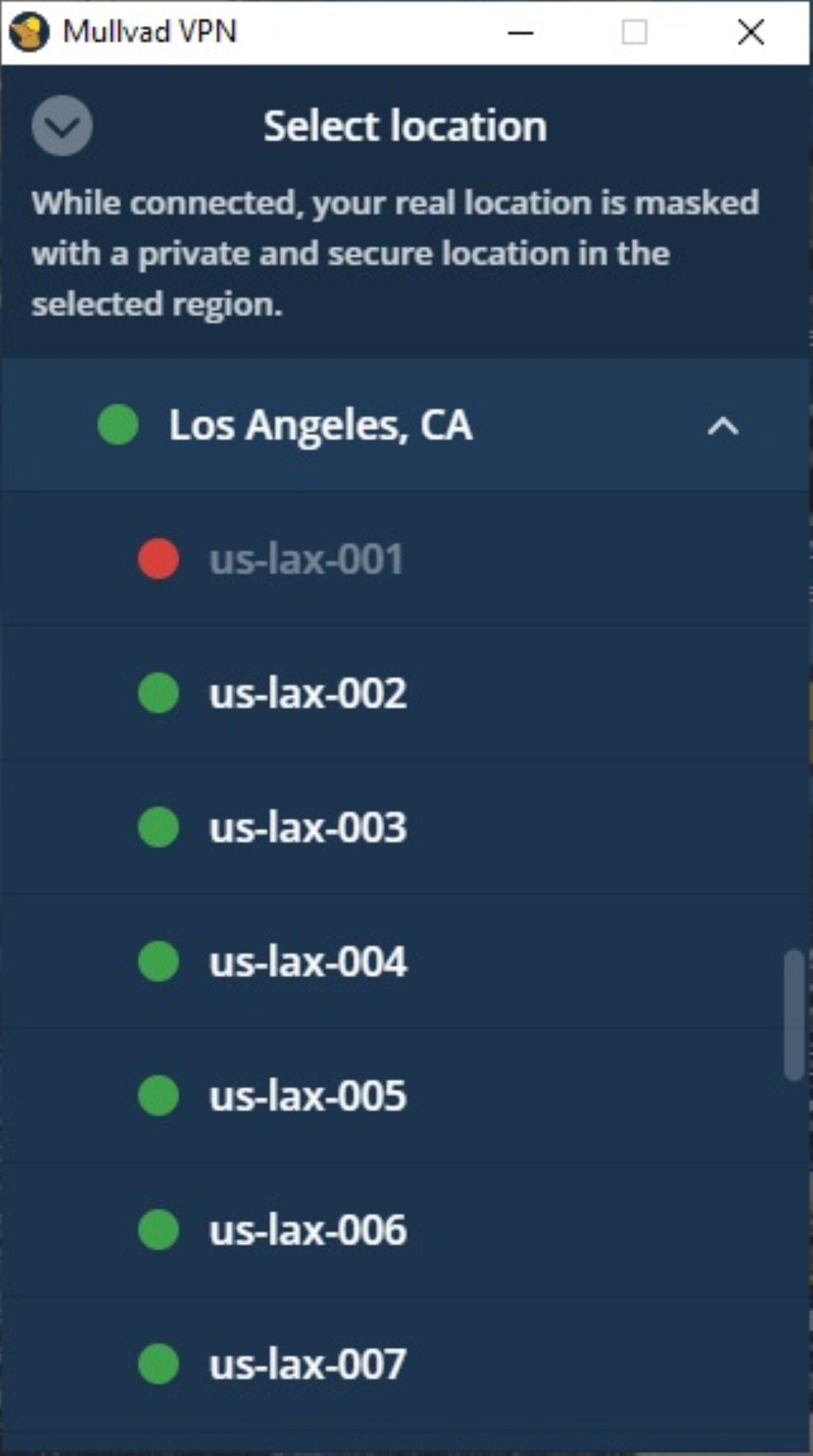 Connecting to any VPN service doesn’t just mean a delay while it’s connecting, it also means you should expect speeds to be slowed and latency to go up. The closer the server and the more a VPN service invests into its server infrastructure, the better the speeds you can expect. Sometimes download speeds are prioritized over upload, while other VPN services have comparable percentage changes between both.

The table below shows the base no-VPN speeds of my Superloop NBN 100/40Mbps Fibre-to-the-Curb home internet connection at a base level during the middle of the day. Moving down the table, you’ll see how download and upload speeds as well as latency are impacted by connecting to particular Mullvad VPN servers in Australia, the US and the UK.

Mullvad VPN’s minimal changes when connected to Australian servers (Sydney for my tests) are incredibly impressive. Only Hotspot Shield has faster download speeds (0.5% vs 3%), but Mullvad beats Hotspot on upload speeds (3% vs 6%) and latency (1ms change vs 21ms) for Australian server tests. This means you shouldn’t notice any massive difference in your usual internet goings-on in Australia while connected to any of the available Australian servers, and that 5ms latency makes gaming incredibly viable. It helps that Mullvad VPN didn’t interrupt any of my usual services: gaming digital platforms, Slack, Discord and Skype.

During all of my Mullvad tests, I only had dropout during my early tests, otherwise Mullvad was always connected, regardless of the server locations I was testing. The US speeds are okay, with a mix of great latency alongside acceptable changes to download and upload. Manually switching servers (all in Los Angeles for the closest servers) did improve download speeds but at the cost of upload speed. Meanwhile, connecting to a UK server resulted in good download speeds given the distance, okay upload speeds and acceptable latency.

Mullvad VPN worked great with my torrenting tests but it was less of a viable VPN companion when it came to testing streaming services. This may be a result of the low server count, which likely makes it easier for streaming providers to block them. The table below gives you an idea of what you can expect of Mullvad from streaming services that have a knack for sniffing out VPNs.

Netflix has been a win in most of my recent VPN tests, so it was surprising to see that I couldn’t access the US library. HBO Max and Hulu were both inaccessible, too, but Peacock was useable with moderate buffering speeds. Unfortunately, BBC iPlayer didn’t work and Kayo, one of the best at sniffing out VPNs, didn’t work on any of the Mullvad Australian servers I tested it on. Stan worked without a hitch except for the Canberra server, where it detected the VPN service.

To put all of this in the context of Australian NBN internet, the table below uses the best-case 26% download speed change when using Mullvad to connect to a Los Angeles server and the 33% change when connecting to a London server. These percentages are used to adjust the average typical evening download speeds (TEDs) so you can get an idea of what Mullvad VPN would be like to use on your NBN connection. The three columns on the right use popular 4K streaming services to show how many simultaneous connections can run on a single NBN connection: Netflix allows up to four but Hulu and BBC iPlayer can technically have unlimited streams.

Mullvad doesn’t have a whole lot in terms of extras. More advanced users can tap into split tunneling, which lets you select which services are protected by a VPN and which ones aren’t. The other options for those keen to tinker are found in the ‘Advanced’ menu. Flick on IPv6 tunneling or a kill switch, both of which are off by default. Mullvad VPN also lets you manually select a tunnel protocol (OpenVPN or WireGuard), OpenVPN transport protocol (TCP or UDP), or bridge mode, all of which are set to automatic by default. 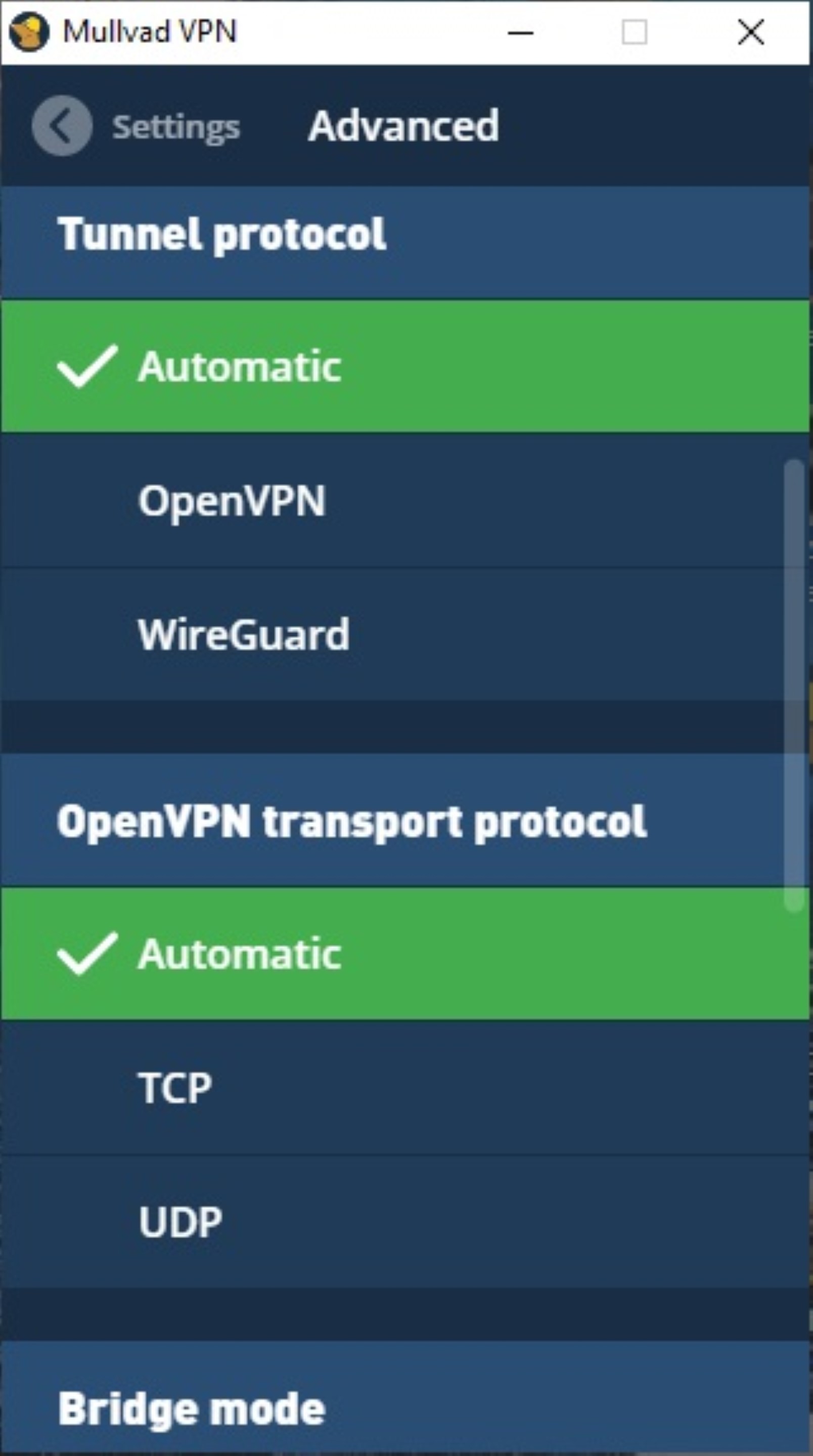 Mullvad VPN vs. NordVPN and ExpressVPN

Mullvad also has the edge on ExpressVPN for a lower percentage difference in download speeds for Australian servers (3% vs. 6%) and even edges out NordVPN (3% vs. 4%), while latency across the three VPN services is comparable. For US servers, ExpressVPN comes out on top for download and upload speeds (16% and 29% changes vs. 26% and 37%) and NordVPN’s download speeds beat Mullvad, too (19% vs. 26%), even if Mullvad comfortably wins on upload speeds (37% vs. 84%).

Still, NordVPN and ExpressVPN both have more servers (5,440 and 3,000+ vs. 766) in more countries than Mullvad VPN (59 and 94 vs. 37). While ExpressVPN and Mullvad allow for five simultaneous connections per account, NordVPN goes one better at six. Meanwhile, ExpressVPN and NordVPN both have included Smart DNS services and 24/7 support.

Admirably, all three VPN services have zero-logging policies, comparable military-grade encryption and 30-day money-back guarantees. Despite some wins for Mullvad, ultimately, you’re better off investing in either NordVPN or ExpressVPN.

Should I buy Mullvad VPN?

If you’re looking to try a full-fledged VPN service without having to invest a lot, Mullvad VPN is a great place to start even if the great monthly pricing doesn’t compete on a yearly or beyond timeline. What Mullvad VPN lacks in a user-friendly interface and compatibility with international streaming services, it makes up for in user protection and great speeds.

No. Mullvad VPN is not free, but at $5.50 a month it's quite a bit cheaper than other VPNs we've reviewed.