With so many great VPN choices out there, IPVanish offers few reasons to consider it as an essential purchase.

In our Australian team's research of speed and streaming tests, IPVanish does the speed and protection part decently, but even unlimited simultaneous connections aren’t enough to save it from being a mostly disappointing VPN. Norton Secure VPN was also a disappointment while Surfshark VPN proved to be a contender. IPVanish is the next one in line for a review update and, outside of impressive security and Australian server speeds, there’s not a whole lot else to love about the VPN service. 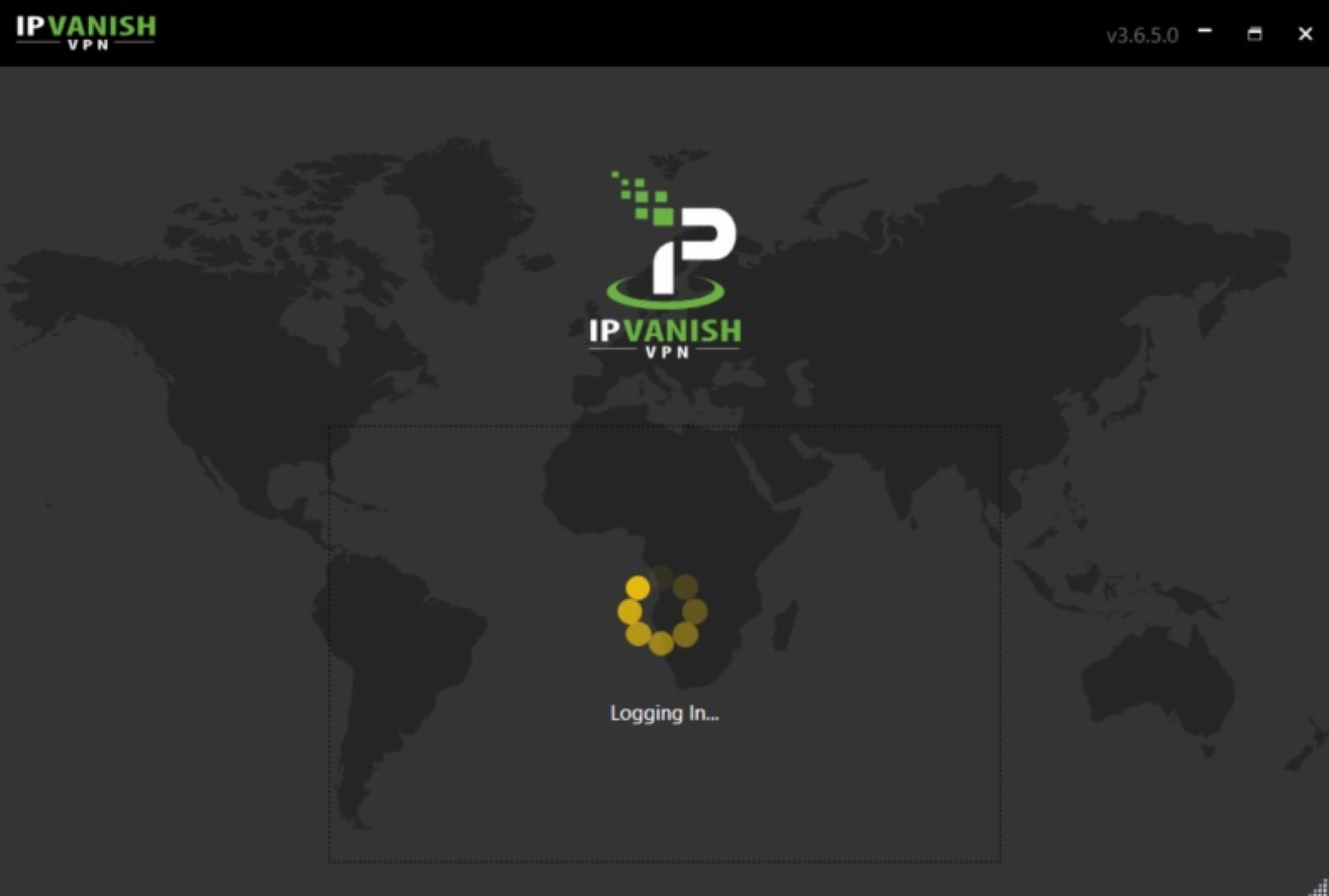 At the time of updating this review, IPVanish VPN was offering a $47.89 first-year price, which is a great deal for a VPN, especially compared to IPVanish's regular yearly price of $89.99. Without the discount, IPVanish still offers great monthly pricing and quarterly pricing options for a VPN, even if it’s not so great for annual pricing.

Data effective 4/14/2022. Offers and availability may vary by location and are subject to change.

If you want to trial IPVanish, you can take advantage of the 30-day money-back guarantee, but it only applies if you sign up for the annual subscription. If you are having doubts about an IPVanish VPN subscription, you’re better off paying the monthly fee if you’re worried it may not be for you, in case you forget to cancel after 30 days.

For comparison, the pricing table below pits IPVanish against our current top five VPN providers.

Data effective 4/14/2022. Offers and availability may vary by location and are subject to change.

The first thing you’ll notice when you launch IPVanish is how it looks, and that’s not a compliment. It’s less of an issue on mobile with a simplified IPVanish for Android layout, but it looks like a networking tool from the ’90s on PC.

During my initial tests, IPVanish only took a few seconds to connect, but that stretches to up to 15 seconds when you start to manually tinker with the servers. Disconnecting only takes a couple of seconds, but the connection/disconnection is slow enough to pause disruption-sensitive online services like music streaming (for a few seconds).

Click the ‘Connect’ button and, by default, IPVanish connects to the best available country, city, and server. For me, this meant connecting to a Sydney server, which is what you’d expect. You can tweak this, though, to connect to a specific country, city, or server. IPVanish won’t let you switch these quick-connect options when you’re connected to a VPN server, but you can manually connect to another country or city from the server list.

Strangely, that final ‘server’ option in the quick-connect list is where you can manually connect servers, but they don’t have any meaningful indicators of location or latency to help you pick the best one. This is at odds with the option to filter servers by latency (even if latency understandably gets noticeably worse when you step outside of Oceania).

The kill switch is off by default but can be enabled from the front page or within the connection settings, but note that a kill switch stops all internet activity whenever IPVanish is not connected. In terms of servers, IPVanish has 2,000+ servers in more than 75 locations which, by my count, amounted to 52 countries at the time of updating this review. IPVanish lets you track its server count here, which breaks down into the following:

For comparison, IPVanish has the lowest global server count of the eight VPN reviews that I’ve updated so far and its country count of 52 is the second lowest (‘beaten’ only by Norton Secure’s 31). This is likely why IPVanish spruiks its 40,000+ IP addresses over those other two numbers, which is something that other VPN providers don’t tend to advertise. 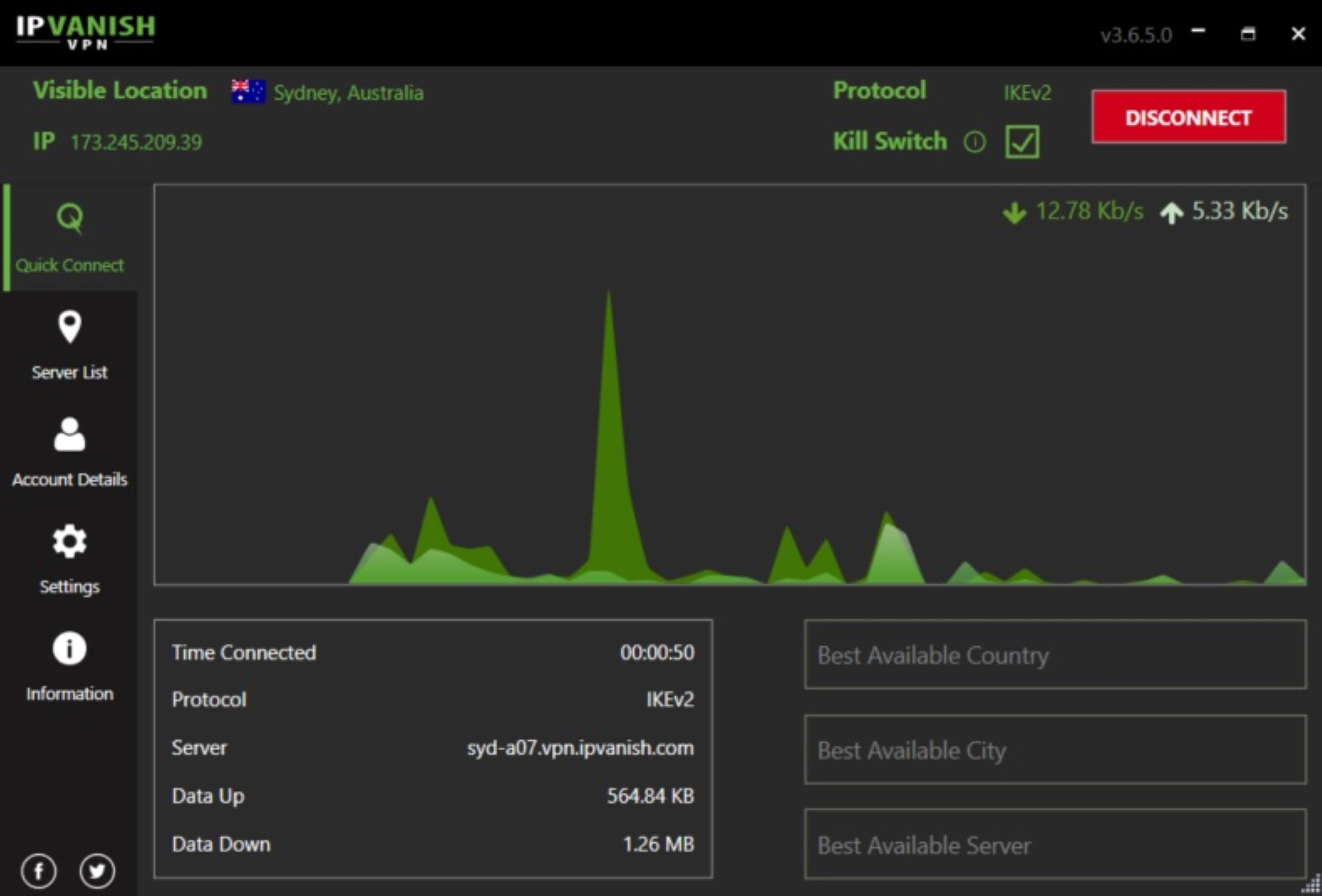 You can see the IPVanish VPN supported devices below:

Helpfully, IPVanish offers guides for all of these platforms, even if device setup was incredibly straightforward in my Windows and Android tests. Note that installing IPVanish or any other VPN on a compatible router means all devices in your home network will effectively use the VPN whenever it’s connected.

A VPN service’s encryption and the distance to the server mean that your internet speeds and latency will be slowed when connecting to a server. Great VPNs invest in server infrastructure that equates to a minimal impact on internet speeds.

The table below uses my Superloop NBN 100/40Mbps Fibre-to-the-Curb home internet to give you an idea of how IPVanish performs during the middle of the day, relative to my internet speeds with the VPN disconnected.

There are some strange results in the table above. First, the good stuff. Australian speeds and latency with IPVanish are great, particularly the 1ms change in latency and the 7% speed difference for download speeds. An automatic connection to the US linked me with a server in San Jose, which had great latency, but the download and upload speeds weren’t particularly flash.

When I manually connected to a Los Angeles server, the speeds got measurably worse, so you’re better off sticking with what IPVanish recommends for the best speeds. Things were even more dire for connecting to the UK, with differences starting at 80% and getting worse.

Unless you want IPVanish for the US Netflix library, you’re better off looking for another VPN to stream international content. Outside of the Netflix, which was fast to load and stream, Hulu was fast to load its library but came up with a VPN-related error and wouldn’t play content. The same was true of Peacock and BBC iPlayer (with multiple UK server tests), while HBO Max blocked access before I could even get to the library.

Those abroad looking to connect to Australian streaming services like Kayo and Stan also shouldn’t rely on IPVanish. Kayo was blocked from servers in Sydney, Brisbane, Melbourne, and Perth, with a VPN notification after loading the library from an Adelaide server. Stan had mixed results: it worked for Adelaide and Melbourne servers but was blocked with Sydney, Brisbane, and Perth servers.

Normally, this is the part of my VPN review here I’d post a table giving an indication of IPVanish’s streaming speeds for popular US and UK streaming services. This paints a picture of how many simultaneous streams you could use taking into account the IPVanish speed changes atop the average NBN typical evening download speeds. But because IPVanish only works with Netflix US, there’s no point.

IPVanish has optional premium extras from sign-up. You can pay $12.99 a month ($2 more) or $89.99 per year your first year ($3 less) and $109.99 after your first year ($1 less) to pair IPVanish with 500GB of secure data storage (via SugarSync). For the regular VPN subscription, though, there’s a diagnostics view within the app, and a couple of traffic-blocking options for additional security: block LAN traffic when disconnected and block local network interfaces when connected.

There’s also a split tunneling feature – useful for separating full-speed, unsecured network traffic from slower-speed, encrypted VPN traffic or sidestepping certain geoblocking measures (like those used in Prime Video) – but it’s restricted to Android and Fire TV devices, which is a shame. In terms of privacy peace of mind, IPVanish has a zero-logging policy to preserve anonymity while you’re connected.

IPVanish VPN vs NordVPN and ExpressVPN

NordVPN and ExpressVPN are currently our pick of the top two VPN services. So how does IPVanish stack up next to them? IPVanish has cheaper regular monthly pricing ($10.99) compared to the $11.99 monthly fee for NordVPN and the $12.95 from ExpressVPN. While IPVanish has better annual pricing than ExpressVPN ($89.99 vs $99.95), NordVPN comes out on top with a $59.88 yearly fee.

ExpressVPN and NordVPN have decent server counts at 3,000+ and 5,440, respectively, with servers in 59 (NordVPN) and 94 countries (ExpressVPN). Both of these values easily surpass the 2,000+ servers and 52 countries offered by IPVanish. Where IPVanish pulls ahead is in simultaneous connections: ExpressVPN only has five, NordVPN taps out at six and IPVanish has unlimited.

All VPN services offer 24/7 tech support and a 30-day money-back guarantee (albeit IPVanish’s is limited to annual subscriptions only) as well as military-grade encryption and all three have a zero-logging policy. NordVPN and ExpressVPN both have cleaner interfaces that are more user-friendly than IPVanish, and they are also both better at sidestepping the geoblocking measures of international streaming services, plus they offer speedier streaming solutions via an included Smart DNS service.

The only real reason you’d consider IPVanish over NordVPN or ExpressVPN is if you want to protect as many devices as possible.

Should I buy IPVanish VPN?

IPVanish VPN isn’t in consideration for our top VPN services and it shouldn’t be near the top of your list for an all-rounder VPN service either. It’s slow to switch servers, connection speeds are middling to terrible, and streaming compatibility with popular international services is basically non-existent. If you want unlimited simultaneous connections, go with Surfshark but, really, there are more than a handful of VPN providers you should look at before considering IPVanish.