We’re living in a time when replacements make sense. We have replaced in-person meetings with Zoom calls. We’ve replaced eating out at restaurants with DoorDash deliveries. For anyone who has thought about cable television and the costs associated with channel lineups and bundles, install and rental fees, or just the hassle of having a technician arrive at your house during the pandemic, there are options.

In fact, there are five really good options. We’ve analyzed the streaming media apps and determined which ones act more like cable television in that they offer original programming, entertaining movies, and a host of archival content. 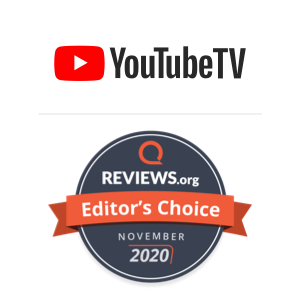 These are the factors we looked at to determine the best cable alternatives:

The best interface and the fastest search of any streaming app

YouTube TV was built for the modern TV watcher. When you fire up the site in your browser, you’ll see live streams from your channel lineup. You can quickly scroll down through the channels and click a large plus sign to record any live shows or movies. It’s powerful because it’s so clear and user-friendly.

There are three simple tabs at the top of the screen: your recorded shows (called the Library), Home screen for top picks and suggestions, and Live for all of the live local, premium, and cable channels.

It’s easy to forget that YouTube and YouTube TV are both owned by Google, and that means lightning fast search. We tested YouTube TV on a Roku Ultra streaming device connected to a HiSense H8G 55-inch smart television and noticed speedy performance when we used the interface and performed searches.

One great example: Let’s say you are a Minnesota Vikings fan. You can click search and type Vikings, then click a large plus sign to record all games for the season. Now that’s fast.

HBO Max has the best shows, and we’ve watched most of them

If HBO Max doesn’t impress you with its wonderful original shows and movies, we’d be surprised. We’re talking about more than Raised By Wolves (our favorite sci-fi show). The canon is deep with this one, starting with shows like Watchmen (a critical darling) and extending to movies like The Witches that would have been in a movie theater in normal times. (We won’t comment too much on whether it’s worth watching, but at least it’s rated PG for the kids.) HBO Max, as the name suggests, has an archive of all previous HBO originals as well, including Westworld and Game of Thrones.

HBO Max is also taking up the mindshare for streaming apps when it comes to documentaries. The streaming app just released a new documentary called The Perfect Weapon that is quite riveting (it’s about political scams and election interference). Another series called The Vow is equally compelling and well-made.

In terms of replacing cable, you won’t miss your premium channels because this is the premium-ist of all. HBO Max also runs on mobile devices and most smart televisions.

Immediate access to live local channels, basic cable, and beyond

One feature that sets Hulu + Live apart is how quickly you can find movies. The app splits streaming content into categories for sports, news, kids programming, and movies. With one click, you can find all movies playing right now on live television. Hulu + Live offers 65 channels including FX, AMC and TCM so there is quite a nice selection of basic cable movies. We found Sleepy Hollow, Snatched, and Logan in about two clicks.

Hulu + Live shows a small window for live television at all times, although you can easily hide the preview. As you are looking for shows and movies, you can click any live television channel and see what’s on right then. We like being able to see this sample and decide if we really want to lean back and watch that channel, popcorn optional. If you do want to watch a show, it’s a simple click on the maximize options.

Netflix is still the king of all streaming media content

At last count, Netflix has over 13,000 shows and movies available. That’s a colossal number, so the sheer variety of programming makes Netflix an excellent cable alternative. It didn’t receive our Editor’s Choice as a cable alternative because you won’t find local channels or sports. However, if your main goal is to find something to watch, there are also about 1,500 original shows available. We love Stranger Things, and we’re major fans of documentaries like The Social Dilemma.

Netflix is well known as a pioneer in making suggestions and recommendations for what to watch. When you find a show you love like Lost in Space, there are often about 10-15 alternatives to pick from in a long list. Other streaming media apps don’t offer as many suggestions, and the ones Netflix recommends are often spot-on. It’s one reason we got hooked on The Expanse after watching Lost in Space.

Free with your Amazon Prime membership, and that makes it primo

Something is always on

The one pleasant discovery with Amazon Prime Video is that there is a deep archive of content. You won’t find as many brand new original shows and movies, although they do debut fairly often. However, we dug a bit deeper and found Arrow and Flash, a few old John Wayne western movies, and several British dramas.

Amazon Prime Video is part of the overall Amazon and Amazon Video ecosystem. That means you can easily rent or purchase new release movies and shows from the same interface. (You can’t say that about Netflix or HBO Max at all.) It also means that, once you have an Amazon Prime account, you can order Blu-Ray discs for movies like the True Grit remake that are not available in 4K otherwise. Been there, done that.

Recap: Which is the best cable alternative?

What a wide selection of cable alternatives! The latest streaming media apps might make you think: Spectrum schmetrum. There’s a ton of original shows, live television, sports, and all of the basic cable channels you’d ever want. And there’s no need to install a DVR or run cable in your home (or arrange for installation).

Overall, we can say this about each:

Which streaming service is the best cable alternative? Tell us what you think in the comments.