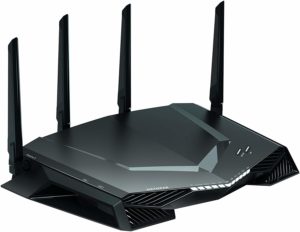 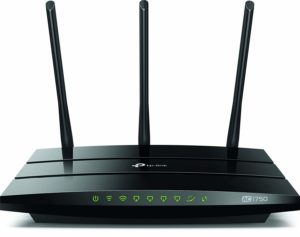 See on Amazon
Best for gaming 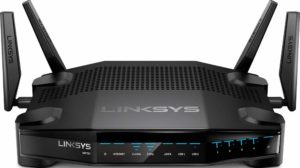 You’ve got your internet set up and your computer turned on, and now you’re free to binge-watch all day long. Right?

Not quite. Before you stream the latest season of Westworld on HBO, you’ll want to shop around to figure out which is the best router for the money. Otherwise, you could be faced with choppy video—or worse, that horrible buffering icon.

Here are our recommendations for routers that will kick that buffering icon to the curb.

What is the best Wi-Fi router for streaming?

How much speed do you need to stream?

Find out which internet plan is best for streaming Netflix and YouTube—or even livestreaming on Twitch—in our Best ISPs for Streaming guide.

NETGEAR teamed up with NetDumas to bring every customization option under the sun to your desktop—but don’t worry, it’s still beginner-friendly. Gamers will love the geofiltering option, which allows you to target only servers and players from your local area. These extensive customizations plus top speeds and coverage make the NETGEAR Nighthawk Pro our favorite router.

If you don’t mind logging into your Google account to control your router settings through the app, the Google mesh Wi-Fi system is hard to beat. By placing multiple units around your house, you’ll be able to connect to Wi-Fi pretty much anywhere. Plus, the price is right.

Which is better, Sling TV or Hulu?

Ready to put your new router to the test and stream your favorite TV shows? Find out which service you should get in our Best Live TV Streaming Services review.

This beastly router gets you speedy Wi-Fi over a few thousand square feet—or more.

If you’ve got a large home that needs a zippy Wi-Fi connection in all its nooks and crannies, the NETGEAR Orbi is well worth the price. Of course, this is one beast of a router—it measures in at 6 by 3 by 8 inches. So make sure there’s room on your shelf or desk for it.

Which streaming service has the most channels?

We’ll give it to you straight—find out which TV streaming service has the channels you’re looking for. *Jedi mind trick hand wave.* Check out our TV Streaming Channel Comparison here.

A budget router with performance to match the $200 competition.

Going on vacation and don’t want to risk someone hijacking your Wi-Fi? Just flip a switch on the back of this TP-Link router to switch to a wired connection. Though it lacks Multi-User Multiple Input Multiple Output (MU-MIMO) support, it packs a real punch in terms of speed and range. And that price is music to our ears.

That multi-user multiple input multiple output (MU-MIMO) technology is a must-have if you’ve got at least a few internet power users in your home. If your router uses MU-MIMO, it gives all your web-enabled devices bandwidth at the same time. So you can stream while you game while you download files.

If you’ve got Killer-enabled hardware, this Linksys router is a gamer’s dream come true.

The Linksys WRT32X router boasts Killer Networks Prioritization, meaning you can worry less about lag and more about landing those skill shots. (If your devices use Killer hardware, that is.) Don’t have Killer-enabled hardware? Then we recommend our top pick, the NETGEAR Nighthawk Pro.

Which ISP is best for gaming?

Find out the winners in our Best Internet for Gaming review. GG.

Recap—which router is best for streaming?

The NETGEAR Nighthawk Pro has our vote as the best router for streaming Netflix, Hulu, and more.

Here’s the TL;DR on which wireless router you should grab for the ultimate streaming experience.

Haven’t decided on a TV streaming service yet? Check out our reviews:

Have a router recommendation? Share it with us in the comments below.

Put your router and internet service to the test.
Compare ISPs in your area.

Are you getting what you pay for?
There was an error initializing the test. Please reload the page and try again.

Connecting to a server ...

This may take a minute, depending on your device.

How to choose a router

Finding the right router is similar to finding the right internet plan: you’ll want to consider the number of people using the internet, plus how many devices you’ll have connected.

You’ll also want to consider how much of your home you want blanketed in that glorious Wi-Fi signal.

Four out of five of our top router picks will run you a couple hundred bucks at least. But if it’s just you connecting to the web and watching YouTube videos, you’ll be fine spending less.

We recommend looking out for these features when shopping for a new router.

You may notice that some routers are labeled as “dual-band.” This is a good thing, and it means it’s not limited to operating on just the 2.4 GHz frequency like routers of old.

The 2.4 GHz band can be pretty crowded, since your Bluetooth headphones, smartphone, and even microwave likely use that same band. But dual-band routers can also hop on the 5 GHz band, which tends to be less crowded.

What are wireless protocols?

Ever wondered what those “802.11” numbers and letters mean? They refer to your router’s wireless protocol, which is how it sends and receives data.

This is the most commonly used protocol, and it cranks out data transfer rates of up to 600 Mbps. This protocol operates on both the 2.4 GHz and 5 GHz bands and uses Multiple Input Multiple Output (MIMO) tech to boost performance.

A router with 802.11n protocol should work perfectly if your family likes to surf the web on a few laptops, desktops, and smartphones.

The newest wireless protocol, 802.11ac also operates on the 2.4 GHz and 5 GHz bands, but it brings a little more to the table.