Sling TV is the cheaper option, but AT&T TV NOW has the most channels
Best Price
View PlansRead full review
Best for HBO Fans
View PlansRead full review
https://www.reviews.org/tv-service/sling-vs-directv-now/
AT&T TV NOW and Sling TV both have pros and cons. We reviewed pricing, channels, features, DVR, and user experience to help you find the best one for your home.
January 12, 2021

If you’re trying to decide which streaming service to get and you’ve narrowed it down to Sling TV and AT&T TV NOW, then you’re in the right spot. We’re here to help you make that difficult decision. So let’s dive in.

Sling TV doesn’t offer HBO, and this is Sling’s biggest fault. But it has lower package prices for those trying to save as much money as possible.

AT&T TV NOW has some premium channels included (you heard me: included) in its plan and has more channels overall.

Although Sling TV doesn’t have the king of premium channels, HBO, Sling TV is our winner.

How do Sling TV’s and AT&T TV NOW’s price compare?

Sling TV has two inexpensive options if you’re OK sacrificing a chunk of channels to keep prices down, but if you want the full suite of what Sling TV has to offer, you’ll need the more expensive package.

How much is Sling TV?

With AT&T TV NOW, you can get up to 140 channels. Now, the price tag is a little high, but you’ll get a plethora of popular lifestyle, sports, kids, and news channels.

How much is AT&T TV NOW?

Does Sling TV and AT&T TV NOW have hidden fees?

Sling TV charges an extra $5 per month for its 50-hour cloud DVR (that’s not even worth $5). AT&T TV NOW doesn’t have any fees, whatsoever.

For some, it might be nice that the cloud DVR is optional if you’re not really into recording. DVRs are super convenient, but the more you can customize your service, the better chance you have of getting exactly what you want.

Which channels do Sling TV and AT&T TV NOW have?

If you want top channels like the Hallmark Channel, Cartoon Network, and Univision … AT&T TV NOW is your service

Depending on the plan you get, both services have an almost equal amount of popular channels. If you love your Hallmark Channel Christmas movies and your kids love Paw Patrol, AT&T TV NOW is for you.

Of course, AT&T TV NOW will have more popular channels because of its overall channel count, but check out the channel lineup for Sling TV and AT&T TV NOW, just in case. Price aside, though, AT&T TV NOW wins this section.

Which popular channels do Sling TV and AT&T TV NOW have?

Back in the day, cable was the most reliable way to get good channels. But times have changed—and if you want to cut the cord and still watch ABC, FOX, CBS, CNN, or CNBC, check out both services to see if they offer them in your area.

And it can’t be overlooked that Sling TV doesn’t have HBO at all (or CINEMAX)!

So if you can live without Succession or The Wire, you’ll do great with Sling TV. But if you and your kids want to catch the cute new Scoob! series, you’ll have to pay a little extra for AT&T TV NOW. (Who doesn’t want to watch Scooby-Doo and the gang?)

How much are Sling TV's and AT&T TV NOW's premium channels?

Which sports channels does Sling TV and AT&T TV NOW have?

The section you’ve all been waiting for (*drumroll*): the sports channel lineup. And we must say, AT&T TV NOW is a clear championship winner in this department.

So, it’s not hard to see that AT&T TV NOW is the option for sports aficionados.

And AT&T TV NOW has the following sports channels:

How do Sling TV’s and AT&T TV NOW’s DVR compare?

With 500 hours of DVR storage, that means AT&T TV NOW could let you record 30 Criminal Minds episodes, 10 Phineas and Ferb episodes, 20 Lifetime movies, and 40 MLB and NBA games, and still have space leftover.

How do Sling TV's and AT&T TV NOW's DVR compare?

Does Sling TV or AT&T TV NOW give you a better user experience?

Sling TV’s channel guide is easy to navigate, while AT&T TV NOW’s can be a little frustrating

The Sling TV channel guide is similar to that of traditional cable. It has channel scrolling, time scrolling, and channel categories. There’s also a view that lets you see next week’s schedule so you can scope out which action movies you want to watch while cuddling with a glass of wine. 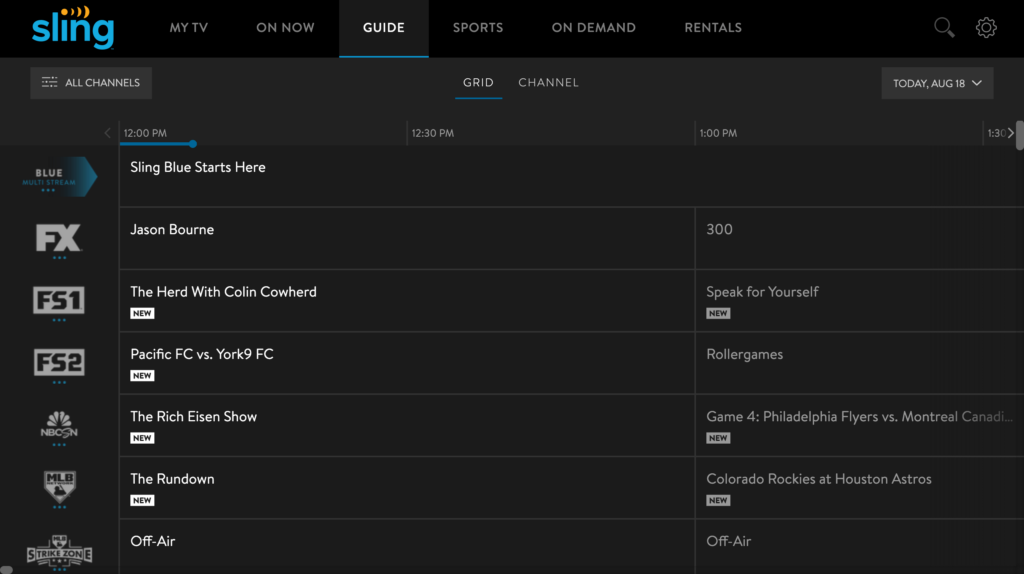 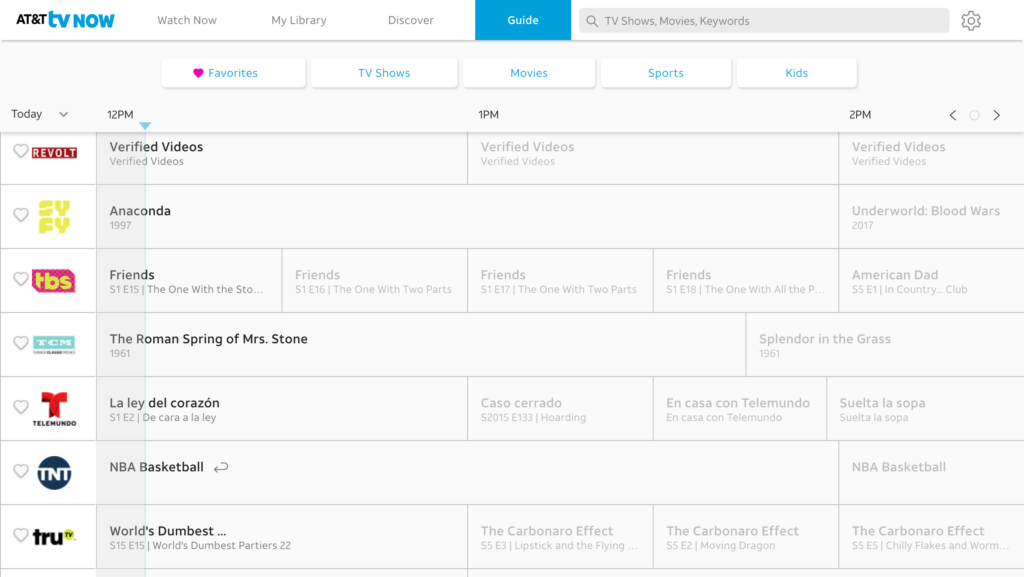 Do you have enough internet bandwidth for the family?
AT&T TV NOW suggests a minimum of 12 Mbps for each user, and Sling TV recommends at least 25 Mbps. Get one of the best internet services for streaming to have yourself an uninterrupted movie marathon.

Which devices can you watch Sling TV and AT&T TV NOW on?

These days, we want our streaming service to be compatible with our phones, tablets, and TVs. After all, your commute on public transit is the perfect time to catch up on The Expanse.

Download the app on these devices so you can watch your TV show while on the train or waiting in a long line.

You can stream Sling TV on these devices:

Stream AT&T TV NOW all day long on these devices:

Recap: Sling TV is the winner

If you’re still on the fence, you can dive into the nitty-gritty details in our full reviews:

Do you have Sling TV or AT&T TV NOW? What’s your experience with it been? Or do you like a different streaming service better? Drop us a comment below!