Tips for Moving from iPhone to Android

There are plenty of differences between iPhones and Android phones. Apple products tend to be a bit pricier, while Android devices are more customizable. You can use certain apps on iPhones that you can’t use on Android phones, and visa versa.

But the biggest thing you should worry about when switching from being an iPhone user to being an Android user is transferring your information.

You don’t want to be writing “new phone, who dis?” to everyone who texts you for the next six months. So, import your contacts. And while you’re at it, you might as well transfer your calendar events, music, photos, and everything else.

We’ll walk you through the steps to do this in this article. But first, let’s talk about what you’ll lose no matter what when you switch from an iPhone to an Android phone.

Tips for Moving from iPhone to Android 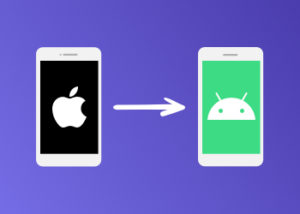 Still looking for the perfect new Android device?
We’ve rounded up all of the best deals on new devices, like the Samsung S20 and the Google Pixel 4, so that you don’t have to scour the internet for an affordable phone.

Some relationships aren’t meant to last

While you will be able to bring your contacts, photos, music, and other data from your old iPhone to your new device, there are some things you can’t take. Physical hardware, like phone cases and power chords, that you bought for an iPhone 11, for example, will not work on Android devices.

Unfortunately, this is also true of any apps that you’ve purchased for your iPhone. While many of the same apps are available for Android, you will have to pay for them again. Say goodbye to all of those in-app purchases you made in PUBG Mobile.

Use the built-in app on your new phone

Before you spend too much of your precious time Googling “switch iPhone to Android,” check to see if your new phone has a built-in data transfer app. Plenty of new phones, like Samsung Galaxy and Google Pixel models, will come with this technology.

Some Android devices, like the Galaxy S20 Plus, will come with a USB-OTG connector in the box which allows you to directly transfer data from your iPhone quickly.

Upgrade your phone plan to match your sweet new phone.
If you’re still using an overpriced unlimited data plan or an underpowered prepaid plan, it’s time to level up. Check out these amazing plans to see which is best for you.

But most built-in data transfer tools pop up automatically when you’re setting up your new phone. Be sure to follow the prompts carefully to switch everything from your iOS device to your new Android phone.

If your phone doesn’t have its own syncing technology, don’t worry. There are plenty of other ways to transfer your contacts, calendar, media, and settings. We’ll walk through them now.

Google might be trying to take over the world, but it’s going to make managing your data really easy in the process. Seriously, all you need to switch your contacts, calendars, photos, and videos from your old device to your new device is your Google account.

Just download the Google Drive app on your old iPhone (if you don’t already have it). Then open the app and click on the menu in the top left corner. Select Settings and then Backup. In the backup menu you can choose to backup your contacts, calendar events, photos, and videos. Here’s what it looked like on my old iPhone 6s. 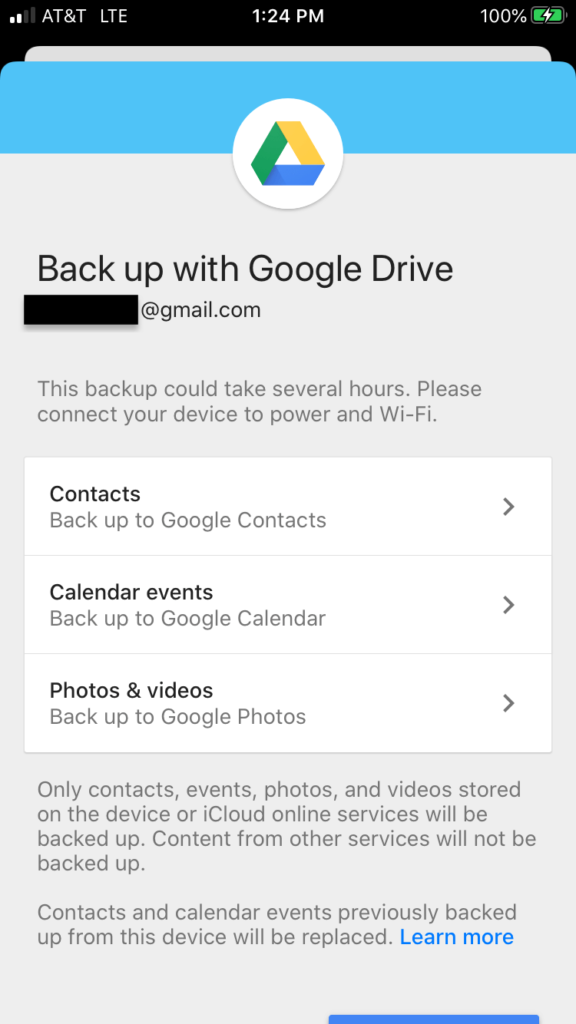 When you choose to back up a certain kind of data you can select the actual content you want to transfer (so you can ditch those weird selfies you took at 3 a.m.).

When you sign in to your new Android phone, you’ll be able to access all of these files! Woohoo! That was easy.

Just make sure that your iPhone is plugged in and connected to Wi-Fi when you do the backup. It can take some time and use a lot of data.

Is your phone internet feeling a bit weak?
If you’re having issues with laggy internet on your phone, it could be a number of things. Read this article to figure out what’s going on and fix it.

Don’t worry, just because you’re moving over to a new operating system, that doesn’t mean you have to lose all of those Beyoncé albums you bought on iTunes. Here’s how to transfer your music.

First, sign in to Google Play Music using your Google account on the computer where you’ve stored your iTunes library. Then download the Music Manager from Google Play Music. Once it’s installed, open the application and select “iTunes” when it asks where you store your music. 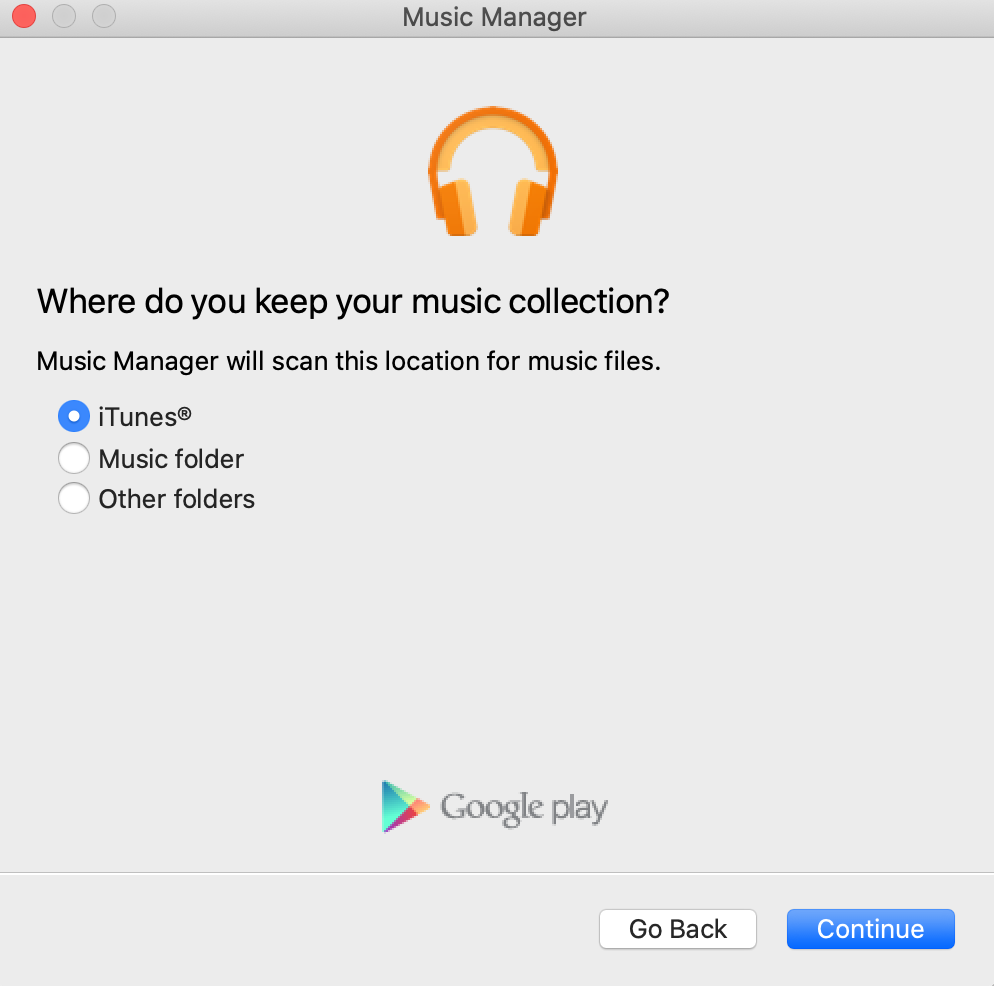 Now you can select “Upload all songs and playlists,” or you can choose to upload select playlists, songs, or podcasts.

If you’re still committed to continuing to use iTunes for some reason (that sleek, bright design, perhaps) then you’re in luck. Your future iTunes purchases will automatically sync with Google Music.

With most other media services, like Spotify, Netflix, or Hulu, you can just download the app on your new Android device and stream/download your content without a hitch.

Losing your text message history is kind of like losing a scrapbook that you’ve created with all of your friends and family. Not to mention all of the important information, like addresses, names, and juicy gossip, that is stored in your message history.

So, how can you transfer this trove to your iOS device to your new Android smartphone? The process is surprisingly difficult, but not impossible.

There are several apps that can help you transfer your message history. The iSMS2droid app is one of the highest rated and most popular options. Download the app and follow the instructions it gives you for backing up your iPhone and retrieving the saved data.

However you decide to transfer your messages between devices, be sure to turn off iMessage on your old iPhone. Otherwise you risk SMS and MMS messages being sent to your old phone instead of your new Android phone.

iOS devices are not known for their customizability. So one of the biggest things that Apple users will have to get used to when switching to Android is the sheer number of options.

You can set up third-party apps as your default preference (whereas iPhones still make you use the inferior Apple Maps for default navigation). You can set up your homescreen to truly reflect your unique personality. And you can even download “launcher” apps that will let you totally customize the way your Android phone looks from the moment it’s booted up.

All of these new apps should allow you to really take advantage of that unlimited data plan.

But, because the two interfaces are so different, you won’t be able to import/sync your settings for apps, backgrounds, security, and other parts of your phone.

That’s it! You should be ready to rock with a fully synced device. Just make sure that you have an awesome phone plan to match your awesome new phone.