Can You Game on Satellite Internet?

Laaag. We’ve all been there, but gamers on satellite internet get the short end of the stick when it comes to high latency.

How does latency affect gaming with satellite internet?

Latency is the elephant in the room when it comes to satellite internet. And latency is likely what will make you want to flip your desk in frustration if you’re playing a highly reactive game, like a first-person shooter, on a satellite connection.

(We don’t recommend flipping your desk, though. We have too many gamer friends who’ve ruined keyboards, headsets, and more expensive tech doing that.)

Latency, which is also known as ping, is a measure of the time in milliseconds (ms) it takes for your keyboard taps or mouse clicks to travel from your end of the network to the game’s server, and then back.

With satellite internet, this means that your button presses or mouse clicks have to travel thousands of miles to a satellite orbiting the Earth, then down to the game’s server, back up to the satellite, and then get beamed down to your console or computer. Now it makes sense why your character may not cast its ultimate skill right when you hit that key combo.

To give you some cold, hard data, here’s what typical satellite internet latency looks like compared to the latency of DSL, cable, and fiber internet connections:

With satellite internet, your in-game character will take half a second to complete the action you just commanded it to—at best. That’s not accounting for other issues that might affect your latency, like your router or if you use Wi-Fi.

Can you lower your latency?

Start rejoicing because there are ways to lower your latency. Here’s how to reduce your gaming latency:

How do download speeds affect gaming with satellite internet?

Yes and no. The Federal Communications Commission (FCC) recommends at least 3 to 4 Mbps download speeds for gaming,2 but that likely won’t cut it.

Why? Well, you probably aren’t just gaming on your internet connection. You’ve probably got your cell phone on the Wi-Fi, and your partner might be streaming Altered Carbon one room over. You may also have children gaming on their own consoles or doing homework online. (Likely story?)

To make sure everyone in your home doesn’t get hit with buffering or disconnects, you need faster download speeds—or more bandwidth—to keep that internet connection going. But unless you’re gaming in 4K (which we don’t recommend doing on satellite internet), your game shouldn’t need much in the way of download speeds.

A minimum of 25 to 50 Mbps is a good download speed for gaming—as long as you don’t have more than two to three people and a few devices using the internet at the same time. (And remember, your smart TV, home security system, and cell phone are all using the internet.)

Sound like a typical day at your home? Then either a HughesNet or Viasat plan should keep you connected.

If you’ve got more than a few people hopping online at a time, have a smart home system, or your home security system includes several cameras, you’ll want speeds of 100 Mbps or faster.

Does this describe your happy clan of gamers? You’ll want to grab a Viasat satellite internet plan since its max download speeds go up to 100 Mbps.

How can you improve your satellite internet speed?

If your satellite internet speeds seem slower than what you pay for, there are a few things you can do to speed things up. And no, you don’t need to call Viasat or HughesNet customer service.

Check out our guide to speeding up your satellite internet for several troubleshooting tips.

Turning on your console and stepping into the nightmare-fueled world of Dark Souls doesn’t require much data at all.

But don’t forget that you might need to download your game or download patch updates, and those things can eat up a good chunk of data. And if you go past your satellite internet data cap, your game downloads might just inch along at a mind-numbing speed of 1 to 5 Mbps.

Data caps may not mean a lot to someone on a DSL, cable, or fiber connection, but unlike its counterparts, satellite internet comes with some pretty low data caps. Viasat (formerly Exede) gives you anywhere from 12 to 150 GB of data per month, while HughesNet gives you 10 to 50 GB of data each month.

That’s not a lot of data, and it gets worse. If you use up all your data allotted for the month, both Viasat and HughesNet can slow your download speeds to 1 to 5 Mbps. Just no.

Viasat says its unlimited plans come with “unlimited” data, and that’s kind of true. You do get unlimited data, but the amount of high-speed data Viasat gives you each month is limited. As long as you have high-speed data available, you’ll cruise along at 12 to 100 Mbps, depending on which Viasat plan you grabbed.

Viasat unlimited data plans
Data effective 01/17/22. Offers and availability vary by location and are subject to change.
* Offer available to new qualifying customers. One-time standard installation fee may be due at checkout. Minimum 24-month service term required. Equipment lease fee is $12.99/mo. Taxes apply. Service is not available in all areas. Offer may be changed or withdrawn at any time.

Once you’ve used up your unlimited data, Viasat might slow your speeds down to 1 to 5 Mbps if there’s a lot of internet traffic. So, if the stars align, you could still fight off voracious velociraptors in Ark: Survival at decent speeds.

On the other hand, HughesNet offers only one download speed: 25 Mbps. That might be too slow if you have a medium- to large-sized family or if you own a lot of connected devices. And HughesNet’s max data allowance is 50 GB, which is far less than Viasat’s max of 150 GB. You’ll also end up paying more if you want a 30 or 50 GB data cap from HughesNet, even with Viasat’s three-month price bump.

HughesNet data caps
Data effective 11/11/21. Offers and availability vary by location and are subject to change.
† Pricing for the first 6 months. Service plans require a 24-month commitment. Pricing not available in all areas.

The only thing HughesNet does better than Viasat is that it lets you buy more data if you go over your cap—Viasat won’t let you buy more data for its unlimited plans. HughesNet also offers a bonus 50 GB of high-speed data from 2 a.m. to 8 a.m. daily.

How much data do you need for gaming?

We mentioned that you don’t need much data for gaming, and that’s true: online gaming uses only 34 MB of data per hour. That’s 0.034 GB of your monthly data allowance, which ranges from 10 to 150 GB.

How much data does gaming use?

Depending on how often you game, your total monthly data usage from gaming can range from about 1.2 to 2.9 GB. That’s a drop in the bucket even with the smallest data cap available.

Of course, this takes into account gaming only. You’ll need more data for anything else you do online: browsing the web, checking email, watching Netflix, and, of course, downloading new games from Steam.

How much data do you need for gaming on satellite internet?

We go into more detail on how much data you need, plus how to get it, in our HughesNet data guide and Viasat data guide.

Viasat (formerly Exede) gets our vote as the best satellite internet provider for gaming. Depending on your needs, you can get faster download speeds of up to 100 Mbps with Viasat, as well as more high-speed data each month (up to 150 GB). That's why it earned our Editor's Choice award for satellite internet.

Here’s a quick look at how your two satellite internet providers, Viasat and HughesNet, compare for download speeds and data:

Viasat vs. HughesNet satellite internet for gaming comparison
Data effective 11/11/21. Offers and availability vary by location and are subject to change.
‡ For the first 3 months.
^ Requires 24 month agreement.

What games can you play on satellite internet?

If satellite internet is your only option, that doesn’t mean your gaming career is over. You can still game even with high latency and low data caps, but you might be restricted to certain types of games or certain roles. Here’s what we recommend for games you can play on satellite internet:

Not sure where to start even with those suggestions? Here are four video games we recommend for satellite internet. 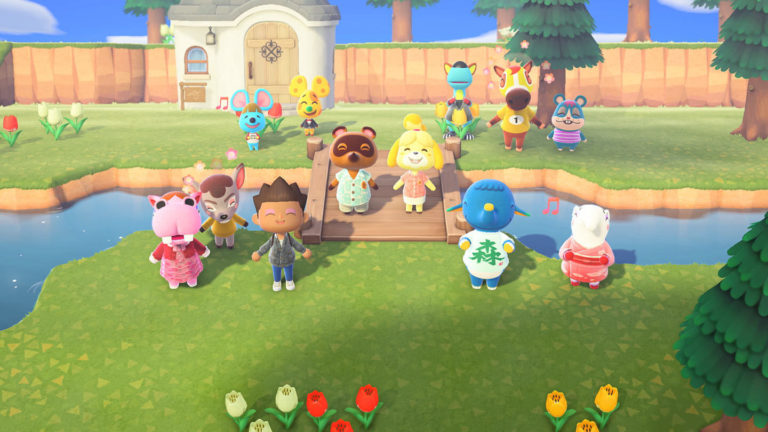 With calming gameplay and dozens of cute NPCs, Animal Crossing: New Horizons offers a relaxing way to decompress. Yup, Tom Nook is back with another amazing deal you can’t refuse: escape to a deserted island and make it your home sweet paradise home. Build new decorations and customize everything from your house to your garden, give gifts to adorable new friends, or go bug hunting at night. (Just watch out for the tarantulas!) 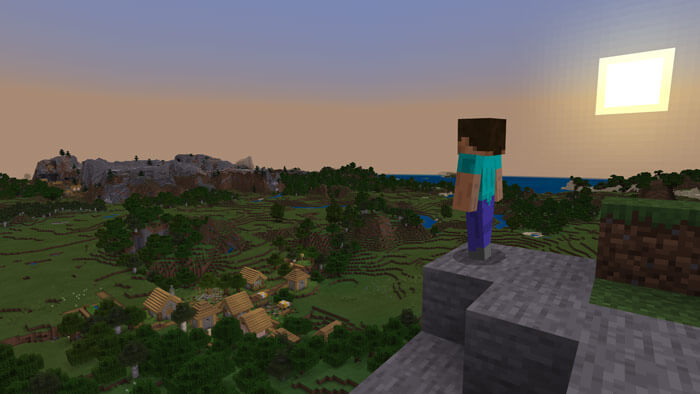 Get back to your 8-bit roots with Minecraft. Battle spooky enemies and venture into the Nether in Survival Mode, or relax and put your building talents to the test in Creative Mode. Whatever you choose to do, Minecraft is literally what you make it.

Where to buy Minecraft

Strike fast during the Marauder's stagger state and you can sneak in a second shot. pic.twitter.com/Ii6ERYOTQe

The DOOM franchise makes a comeback with intense gameplay and dark graphics. If you played the original back in the day, prepare to be sucked back into this violent world of demons and Glory Kills. And if your satellite internet connection is experiencing a case of the Mondays, you can plow through the singleplayer campaign while offline.3

Where to buy DOOM Eternal 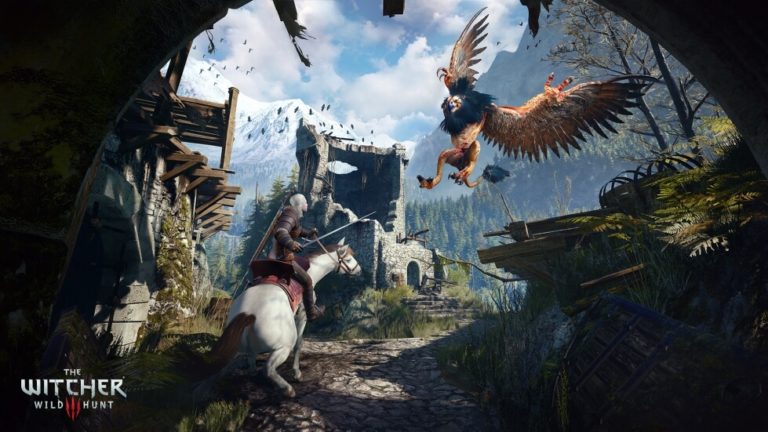 CD Projekt Red delivered another visually stunning Witcher game with in-depth storytelling. If you love an RPG that isn’t afraid of blood, monsters, and violence (read: mature content), it’s time to hop on your trusty steed named Roach and clear the land of baddies.

Where to buy The Witcher 3: Wild Hunt

Now that you know about gaming on satellite internet, here are your next steps.

Find out if you have other rural internet options.

Dig into our picks for the best internet for gaming.

COMPARE THE BEST ISPS FOR GAMING