We like Frontier’s FiberOptic plans and unlimited data, but its customer service and random fees are hard pills to swallow.
Recommended Plans

Our Rating
Call Now: (877) 357-2684
Our Rating
View Plans
Call Now
https://www.reviews.org/internet-service/frontier-internet/
Is Frontier FiOS (now FiberOptic) or DSL internet worth it? Read our Frontier review to learn more about prices and download speeds, plus our recommendations.
March 25, 2021

Frontier has some good things going for it—namely, no data caps, no contracts, and a fiber-optic network.

Between Frontier’s FiberOptic internet service and its DSL service, we think FiberOptic is the better deal. But we know not everyone has access to fiber internet. That said, Frontier’s DSL internet isn’t a bad deal, though we wish it offered faster speeds than a max of up to 115 Mbps.

So should you get Frontier internet? Let’s dig into the details and find out if Frontier’s prices, internet speeds, and data caps make the cut.

Prices for Frontier’s FiberOptic plans are limbo low, but you may find better deals when it comes to its DSL plans.

If you ‘re lucky enough to live where that Frontier’s FiberOptic internet is available, then we recommend getting it.

Fiber internet like this is faster and most often more reliable than cable or DSL internet. And Frontier’s fiber internet comes at some of the lowest prices for the speeds you get.

The fastest Frontier fiber plan with 940 Mbps speeds rings in at about $80 a month. That’s a pretty average price for gig speeds when compared to other internet providers. And if you want the fastest internet possible, then those speeds will certainly do the trick.

Do you need gigabit speeds?
Chances are you don’t need gig download speeds—unless you’ve got a large family or a lot of roommates using your internet connection to stream, game, upload YouTube videos, and work from home.

We’ll help you figure out which speed is right for you in our guide to download speeds.

That said, you may not need gigabit internet speeds if you’re a smaller family who just streams an HD movie or two on the weekend. And the prices for Frontier’s 50 Mbps and 500 Mbps plans are even better than the price for its gigabit plan. So, we’d say you’re looking at a win-win if you go for either of these plans.

But if you don’t live in an area where Frontier FiberOptic is available, you’re not out of luck. Frontier also has DSL options that come at fairly low prices—but its DSL speeds max out at up to 115 Mbps.

Still, if Frontier DSL is all you’ve got, know that it’s all right. For about $55 a month, you get up to 115 Mbps download speeds and unlimited data. That’s not a bad price compared to other DSL internet providers—most of which won’t give you unlimited data on top of a good price.

But we wouldn’t recommend download speeds a slow as Frontier’s up to 6 and up to 45 Mbps plans for anyone doing some serious online activities. (Think working from home, gaming, or streaming a lot of YouTube videos.) And if you’ve got more than two people using the internet in your home, you’ll likely need more speed.

That said, we know that Frontier DSL internet might be one of your only—if not the only—choice in your area. Still, we recommend checking out these other rural internet options to see if you have any alternatives.

Where can you get Frontier internet?

Frontier internet is available across most of the US, but you’ll mainly find it in West Virginia, Connecticut, and Illinois. 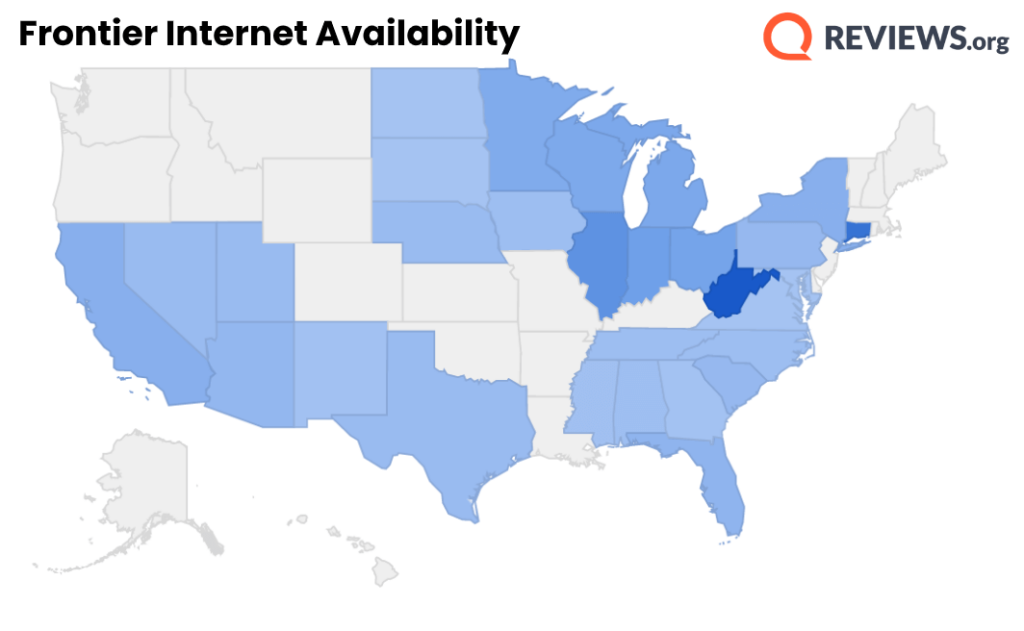 Frontier’s FiberOptic internet service comes in 50, 500, and 940 Mbps download speeds, which pretty much suits any need you could have. The 50 Mbps plan is perfect for two to three people who mostly scrolls through Pinterest looking for dream home inspiration—and maybe streams some home renovation shows on the weekends. (Who, us?)

The 500 Mbps plan offers great speeds for medium- to large-sized families—or homes full of roommates. These download speeds should support more than a few people streaming, gaming, and working from home all at the same time. (Especially since it’s a fiber connection, which gives you reliably fast upload speeds too.)

And if you mostly use the internet for your home business, freelancing, or streaming on YouTube, you might want to consider the Gig Service plan. With 940 Mbps download speeds, you won’t have to worry that your hour-long Zoom meeting will put a damper on your kiddos’ Disney+ time.

Do I need fast upload speeds?
You likely won’t need to worry about upload speeds unless you upload a lot of large files to the internet. This includes attaching PDFs and giant spreadsheets to your email so you can get them to your boss for the deadline.

But its DSL internet plans may struggle to get your newest YouTube video or photo gallery uploaded in a timely manner. Frontier doesn’t list upload speeds for these plans, but we’d imagine they’re 10 Mbps or lower.

On the other end of the Frontier speed spectrum is its DSL plans. Although its fastest plan can reach up to 115 Mbps speeds, DSL tends to be less reliable in terms of speed performance. That’s mainly because it’s an older technology.

We wouldn’t recommend grabbing anything slower than Frontier’s up to 25 Mbps DSL plan if you can avoid it.

Even 25 Mbps is pretty slow—especially if you have more than one person or multiple devices using your internet at the same time. That’s because the more people or devices that use your internet, the more speed you need to keep everyone’s internet connection running smoothly.

How fast is Frontier internet?

But how does Frontier’s internet speed stack up? Not too bad, actually.

One thing to note is that this weighted score isn’t representative of any download speeds you’ll get from Frontier. Instead, it’s a combination of the average download and upload speeds, plus latency, that Frontier internet users saw in more than 1 million speed tests taken between January and December 2019.

That said, Frontier’s score is a lot lower than we expected. Other fiber internet providers scored much higher: Google Fiber topped our list with 75.6 out of 100, and Verizon Fios Home Internet was a close second with 65.1 out of 100.

A big selling point for Frontier is that it doesn’t put any data caps on its plans. That’s right: zero caps—even on its DSL plans.

Frontier doesn’t even do that sneaky thing some internet providers do where their data is “technically” unlimited, but there are actually soft data caps—after which your speed slows down to a slow crawl. (We’re looking at you, satellite internet providers.)

Unlimited data is especially important in today’s day and age as most of us continue to work, study, and play at home. If you’re like us, you’ve found that your data usage spiked in 2020. So not paying for extra data is definitely a blessing.

Frontier recently did away with a handful of confusing fees, making it easier to get a handle on your monthly bill.

We’re pleased as punch to not see any mention of contracts on both Frontier FiberOptic and DSL plans. That doesn’t mean your monthly bill won’t go up after the 12-month promotional period, but it gives you the freedom to change things up without paying a penalty.

The Frontier FiberOptic Gateway Router is an Arris NVG468MQ wireless gateway. That means it can be used as a modem and a router, and comes with Wi-Fi already set up. And it comes included with any FiberOptic internet plan. *fist pump*

The gateway used to cost $10 a month to rent, and Frontier used to charge you the rental fee even if you brought your own modem and router. Thankfully, a new law that went into effect in late 2020 now bans ISPs like Frontier from charging you a rental fee for your own router.1

Just like any other internet provider, Frontier’s service comes with a few fees. Though we’re excited to say it recently trimmed these fees down. So, aside from taxes, which change based on your location, here’s what you can expect to pay in terms of Frontier fees:

According to the scores, Frontier has the worst customer service out of all internet providers.

No ISP gets amazing marks for customer service, but even among the bad, Frontier is dead last. The American Customer Satisfaction Index (ACSI) gives Frontier’s customer service a low score of 552, which ranks it below 10 other ISPs—and an eleventh catch-all category of “All Others.”

Like with most ISPs, we recommend using online chat instead of phone calls. But watch out—Frontier’s live chat feature can be a little unreliable. It’s not available 24/7 and it can have some long wait times that make you wish you’d just called.

So if you don’t hear back on chat, schedule a call back or pick up the telephone and give Frontier a call.

Who it’s best for: Families that use a lot of data for videos, gaming, and uploading—or all three.

Why we picked it: This plan gives you a killer combo of high speeds for a low price. Its fast fiber connection will keep your family happy—and your bank account too. Just make sure it’s available in your area.

We think Frontier’s FiberOptic internet service is the better deal, but we like that it also offers DSL service to country-dwelling folks out there. Frontier also lets its customers live the unlimited data dream—even if they have its DSL internet.

And we’re thankful that Frontier recently trimmed down its fees and swapped to no contracts. Oh, and your equipment is now included with your internet plan. Still, it has some work to do in the customer service area.

Look for Frontier internet near you.